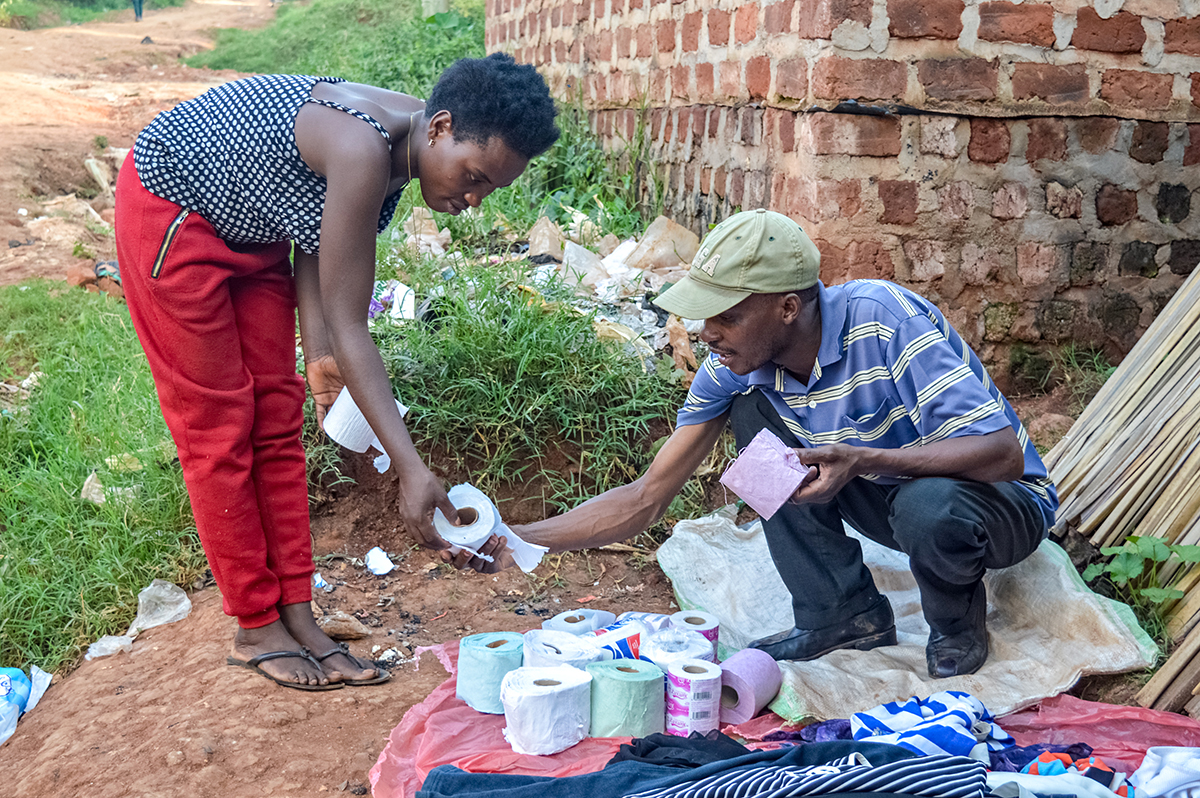 KAMPALA, UGANDA – Along a road in Mutuyani, a village in Uganda’s central Wakiso district, Jimmy Ngobi sells toilet paper, some of it in labeled packaging and some without packaging at all. There is a high demand for both, Ngobi says.

Aisha Nalumu, a regular customer, says she always sticks with the cheaper of the two. As she approaches the roadside trader, he picks up a roll of bright, white toilet paper without packaging. Ngobi says he’s studied Nalumu’s shopping habits for months.

Nalumu admits that there are drawbacks to using this type of toilet paper. Harmful chemicals such as chlorine were found in unlabeled toilet paper by the national agency in charge of monitoring the quality of commercial goods, the Uganda National Bureau of Standards (UNBS), she says. The chemicals can cause serious illnesses. But for Nalumu, affordability trumps the potential health risks that come with regular use of the chemically treated products.

Despite government warnings against the sale and use of unlabeled toilet paper, it remains in high demand. Customers insist on purchasing the locally manufactured toilet paper, because it is inexpensive. For vendors, it boosts their income.

In recent years, the Ugandan government has been pushing for an increase in the local manufacture of goods, primarily for regional export and domestic use. But the move has led to some poor-quality goods, such as this toilet paper, according to UNBS officials.

In January, the state agency destroyed 6.4 million shillings’ ($1,649) worth of toilet paper that was being sold in markets across Kampala, the capital, says Godwin Bonge Muhwezi, head of the UNBS public relations department. In June, UNBS confiscated tons of substandard toilet paper, this time in supermarkets, wholesale shops and from roadside vendors, he says.

What made the toilet paper unfit for sale was that it did not have labeled packaging, and tests conducted by UNBS personnel found various chemicals in it.

“We found out that manufacturers use too much chlorine while making paper,” he explains. Global health experts say paper industries often use chlorine in their products for bleaching purposes.

“We also found out that this toilet paper has chemicals like dioxins and furans,” he continues.

“We have seen abnormalities caused by chemicals, like dioxins and furans, that irritate and cause itching of the vulva and anus,” he explains. In women, this condition is called vulvovaginitis and is often characterized by abnormal vaginal discharge, among other symptoms. The chemicals can also lead to cervical cancer, the health expert says.

Without packaging, the products are exposed to infection-causing bacteria, Mundaka adds.

Twice a month, Joy Bukirwa buys four rolls of toilet paper with no labels or packaging from a street vendor in Kampala. Two years ago, she began to experience vaginal discomfort.

Ngobi says that the toilet paper without labeled packaging sells quicker, even though some customers prefer labeled toilet paper.

Another vendor along Namirembe Road in the capital sells even more rolls of unlabeled toilet paper. Juma Said says he sells more than 60 rolls of unlabeled toilet paper per day and about 15 labeled rolls on a good day. He gets his supply from a pool of damaged products at a local manufacturing plant in Jinja, a town in southern Uganda. He chose not to name the specific company, to protect its identity.

“Customers like cheap, unlabeled toilet paper,” he says. “If it’s contaminated and unhealthy, as officials say, then the public hasn’t felt that, because I have never seen a decline in sales in the past one month.”

The UNBS hopes to tackle this lack of awareness, Muhwezi says. It is advising community members to use personal-care products that the UNBS has approved. But the task is a difficult one.

“We can’t run to each and every one, warning them about these products,” he says, adding that customers and vendors refuse to give information about who is manufacturing such products.