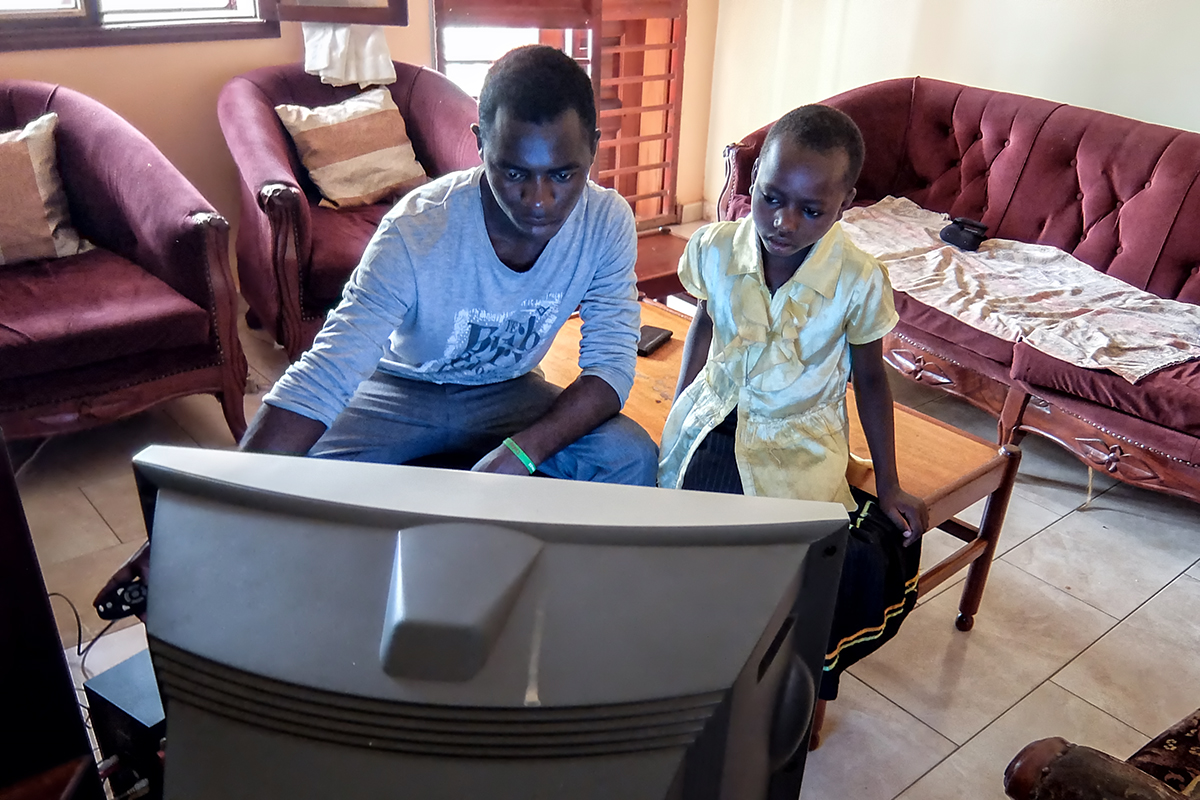 RUKIGA, UGANDA — A 24-inch television sits on a shelf in Winfred Orikiriza’s living room, but she says she can’t remember the last time she used it.

To keep up with the latest news, Orikiriza says she relies on her neighbors or just strikes up conversations with strangers when sharing a taxi or running errands.

Orikiriza lives in Uganda’s southwestern Rukiga District, about 300 miles from Kampala, the capital. Here, she says, some people have yet to see any benefit from the Digital Migration Policy, the country’s transition from analog to digital technology for television broadcasting.

“This makes us miss out and it’s embarrassing,” Orikiriza says.

The policy, approved by Parliament in 2011, is meant to improve access to quality broadcasting services across the country and to promote local content development, officials say. But the transition is also limiting access to information for many, others argue. 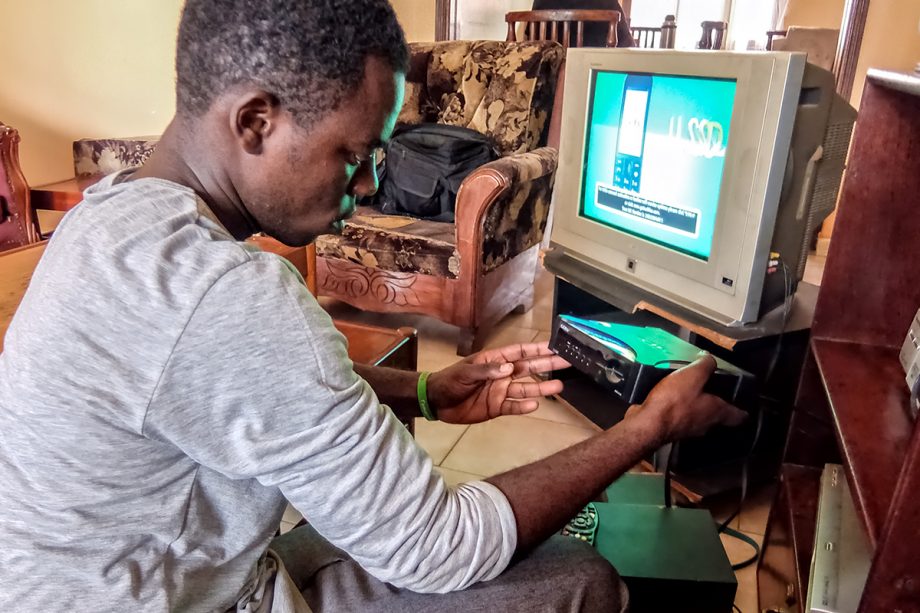 Jude Ggaliwango sets up his recently-purchased pay-go decoder from GOtv, at his home in the Kampala district.

While Uganda has one of the more vibrant media landscapes in East Africa and was one of the first African countries to legislate citizens’ right to information, many information and communications challenges persist.

The government’s introduction of an all-digital form of broadcasting, however, should improve access to information for locals, says Richard Mwecumi, acting manager at Signet, a digital media organization. Mwecumi’s organization, in partnership with state-owned Uganda Broadcasting Corporation, began the transition from analog to digital TV broadcasting in 2015, after Parliament had approved the change four years earlier.

Switching to digital broadcasting from analog in Kampala has made room for more local and international channels, Mwecumi says. A single analog channel sometimes occupied a bandwidth large enough for 20 digital channels, he says.

“Uganda had very few television stations because the spectrum had run low, so to get more space for television broadcasting, they resolved that with digital broadcasting,” he says.

About 32 million Ugandans own television sets, says Pamela Ankunda, spokeswoman for Uganda Communications Commission. But since government began the transition to digital, some people are no longer able to use their television sets to watch local channels.

People can get access to digital channels by using two kinds of decoders, Mwecumi says. Residents within a 60-kilometer (37-mile) radius of Kampala can use a free-to-air decoder. Alternatively, a pay-go decoder is sold nationwide through private and state-owned broadcasting companies, including GOtv.

Pay-go decoder users pay a one-time purchasing fee of 80,000 Ugandan shillings ($22) and an additional 1,500 shillings (41 cents) per day, or a subscription plan at that rate, to be able to watch digital channels uninterrupted, says Mitchel Mwesiga, assistant public-relations officer at MultiChoice Uganda, a privately owned internet and broadcasting company.

Free-to-air decoders also cost 80,000 shillings ($22), but users are not required to purchase a subscription plan. These decoders, however, have fewer digital channel options than the pay-go decoder has, Mwesiga says.

Despite these options, some say digital migration has limited people’s access to information. 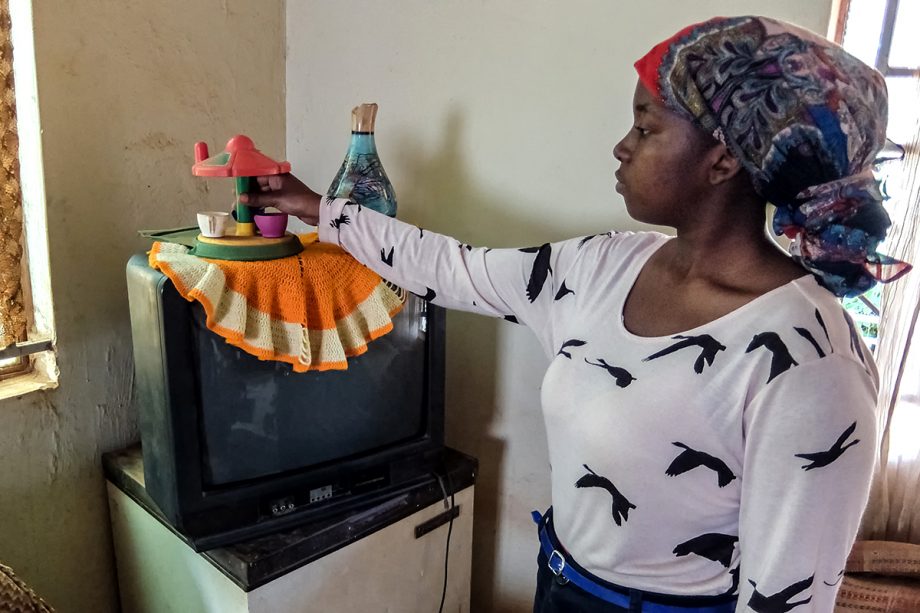 Hope Butungi places ornaments on top of her television at her home in the Mpigi district in central Uganda. Since government began its transition from analog to digital television broadcasting in 2015, Butungi says she has not been able to use her television to watch local channels.

Joan Magayane, who lives in Kampala, says she prefers to own a pay-go decoder instead of a free-to-air decoder but sometimes forgets to renew her subscription plan or does not get around to it, because of her busy schedule. As a result, she says, she misses the news.

“My children had a repulsive skin reaction,” she says. After visiting the hospital with three of her four children in December 2017, Magayane says the doctor told her that the skin irritation was caused by the grasshoppers that she had been feeding her children. The doctor also told her that there were news reports on local channels warning against eating grasshoppers, which vendors often spray with chemicals to prevent decomposition.

“I realized my problem was lack of information about what was happening in the country because I was off air at the time of the sensitization,” she explains.

But for Solomon Kaweesa, a reporter with a local TV station and owner of a pay-go decoder, the transition comes with advantages.

“Clearly, the picture image is now crystal clear on digital broadcasting,” he says.

Mwecumi says the ongoing transition is expected to reach remote areas, including the Rukiga District where Orikiriza lives, by 2022.

Mwesiga, of MultiChoice Uganda, says broadcasting companies are beginning to send their pay-go customers reminders to renew their subscription plans when their plans have almost expired. This will ensure uninterrupted digital broadcasting, he says.

Edna Namara, GPJ, translated some interviews from Runyankole and Rukiga.