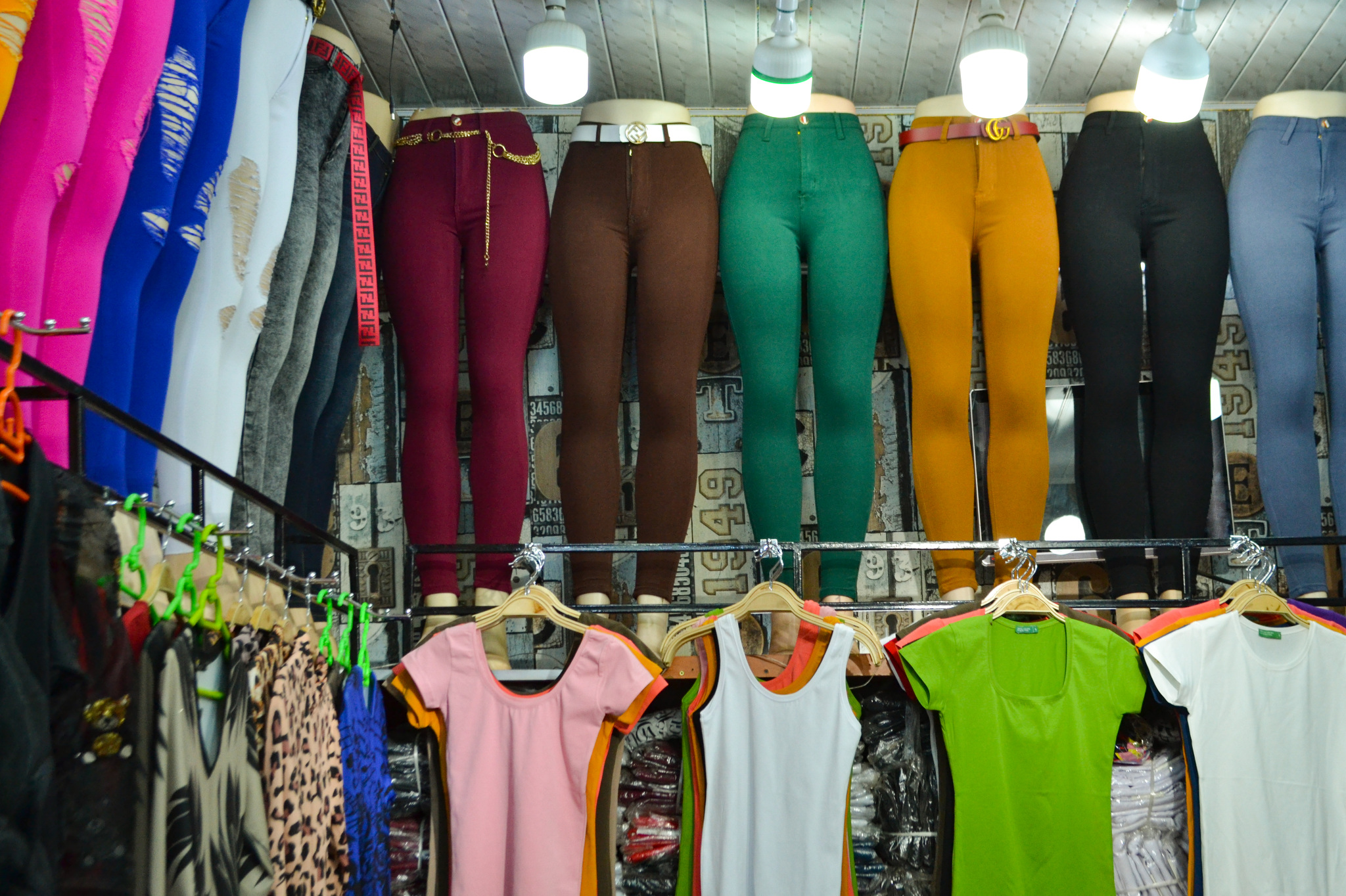 KAMPALA, UGANDA — Nina used to fly to China every two months to hand-pick the jeans now on the mannequins lining her shop. She bought them in bulk on business trips with fellow Ugandan traders.

But the pandemic forced her to shop online – with mixed results.

Between serving customers at the Mini Price mall in downtown Kampala, the 24-year-old holds up a pair of navy jeans that would fit a 10-year-old.

“We ordered size 24 for adults, and they sent a size much smaller that we can only sell to children,” says Nina, who asked to use only her first name for fear of any fallout to her business.

Like tens of thousands of other Ugandan entrepreneurs who relied on traveling to China for merchandise, she shifted her business online when the coronavirus struck last year. For many, that has meant losses.

Nina first entered the garment trade with her husband four years ago, shuttling between Kampala, the Ugandan capital, and Guangzhou, a southern Chinese manufacturing city that has become a global hub for cut-price goods. She enjoyed the travel and barter with Chinese traders. They conversed in English, she says, and communication was always smooth. 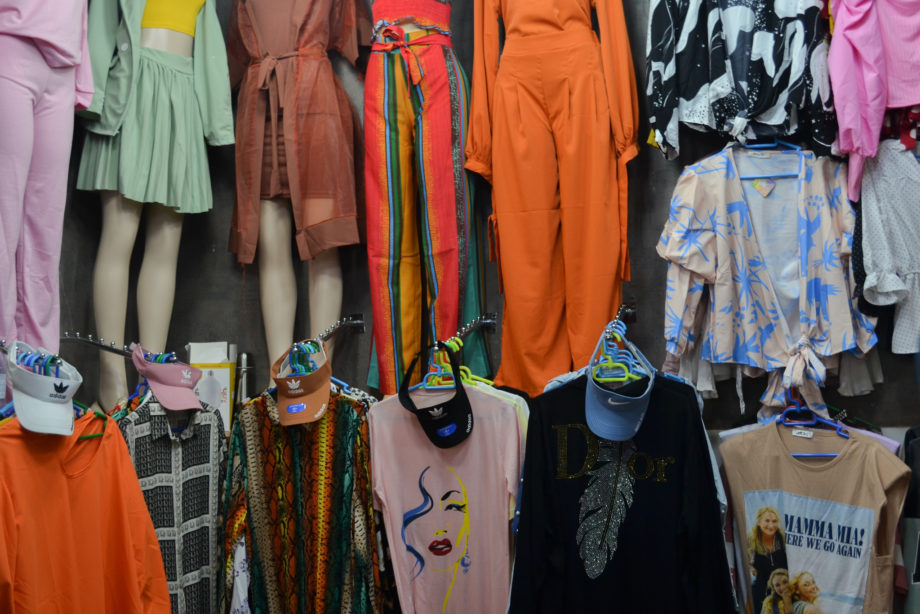 Even after Nina had accounted for airfare and lodging – and split the cost of a shipping container with other traders to send the goods home – she could sell the Chinese-made clothes to Ugandans at a discounted price that also netted her a decent profit.

“The clothes are attractive,” she says about the local appeal of the jeans and blouses she sourced. “People here don’t mind about the quality, they consider the price.”

But her business has been hit by the glitches of online shopping.

The botched-size order – the second she placed with her regular Guangzhou supplier – cost Nina 2.8 million Ugandan shillings ($790). Children’s jeans retail at a lower price, but “I still had to pay the same amount of taxes and money [as] for fabric for the adults,” she says.

Damaged clothes from another supplier lost her 7.7 million shillings ($2,170), while a separate order for 400 pairs of jeans from this same trader arrived with only 120 pieces. “I was disappointed,” Nina reflects. “I had to bear the loss.”

Her suppliers, with whom she mostly communicates via the WhatsApp messaging application, assured her they had dispatched the goods exactly as she’d ordered. They suggested problems may have emerged during the shipping process. 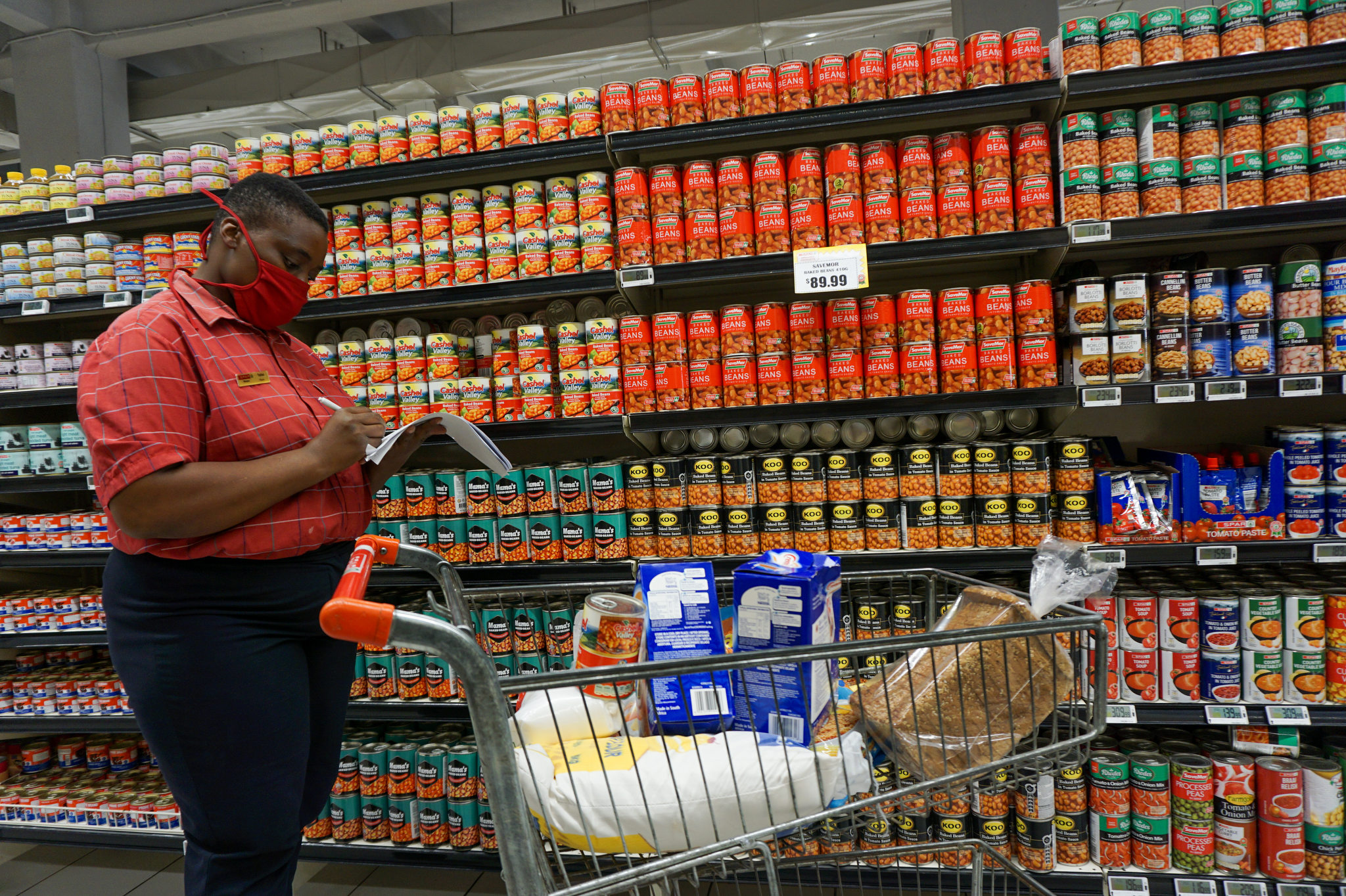 She stuck with them in the end, feeling she has little choice until travel restrictions ease. “Some orders are smooth and others are not,” she says.

China today plays an outsized role in Uganda’s economy. Over the last decade, its state-owned firms have built roads, power plants, communications systems and more in the East African nation.

The growing bilateral ties have led many Chinese entrepreneurs to set up shop in Uganda, while Ugandan traders, too, have capitalized on Chinese goods for their businesses. In 2012, an estimated 90% of Ugandan traders and entrepreneurs purchased their goods from Guangdong and neighboring southern provinces, according to the Ugandan Consulate in Guangzhou, Guangdong’s capital.

But that picture changed dramatically last year as the pandemic took hold.

Isa Ssekitto, a spokesman for the Kampala City Traders Association, says around a quarter of the city’s 150,000 registered traders once shopped directly in China. The vast majority are now trading with Chinese suppliers online. He estimates there could be four times as many unregistered traders.

"We ordered size 24 for adults, and they sent a size much smaller that we can only sell to children.”NinaKampala retailer

Online trading has been “a nightmare” for some Ugandans, says Ssekitto, especially in the textile and timber industries. He has recorded 10 formal complaints since June 2020, and many more placed informally, as traders claim they’ve been fleeced by their Chinese partners.

His attempts to mediate have so far been unsuccessful. “The [Ugandan trade] ministry finds it difficult dealing with foreign suppliers,” Ssekitto says, adding that traders get very little attention when they report problems to the Chinese Embassy.

Stella Aringo, public relations officer for the Ministry of Trade, Industry and Cooperatives, says the agency has heard of problems but received no written complaints. The Chinese Embassy didn’t respond to multiple requests for comment.

Herbert Kafeero, communications coordinator at the Uganda branch of the Southern and Eastern Africa Trade Information and Negotiations Institute, a nongovernmental organization, thinks online firms are taking advantage by transferring risk to buyers.

“This is a liability issue,” Kafeero says.

A national e-commerce strategy that punishes “unscrupulous individuals” could be one way forward, he says. 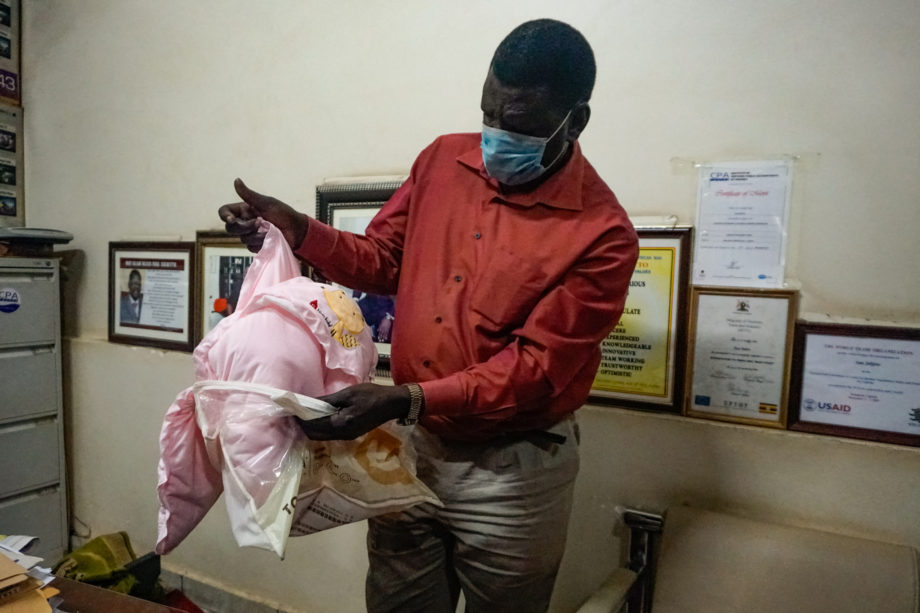 Isa Ssekitto inspects a baby blanket shipped from China. Many Ugandan traders have complained about receiving substandard goods since they started sourcing online.

In the bustling Mukwano Centre Shopping Arcade in downtown Kampala, another trader is grappling with a disappointing delivery.

Pointing to the rows of diaper packages in her store, wholesaler Sarah Mwajuma says only half the packs she ordered arrived intact. The rest were so out of shape, they were unusable. “I had to discard them,” she says.

The single mother of two immediately told her supplier in Shanghai. But he was “feigning ignorance,” she says, and eventually blocked her messages on WhatsApp. Faced with a loss of 23 million shillings ($6,500), Mwajuma complained to the traders association.

But without any resolution in sight, the 40-year-old feels frustrated, especially at a time when business has slowed.

Kampala was under strict lockdown for around three months last year, and even though shops have reopened, customers are spending less in the pandemic-induced downturn.

There are some upsides, though, Mwajuma says: “I am able to spend more time with my daughters, and we bond. With online orders, I don’t spend as much time traveling.”