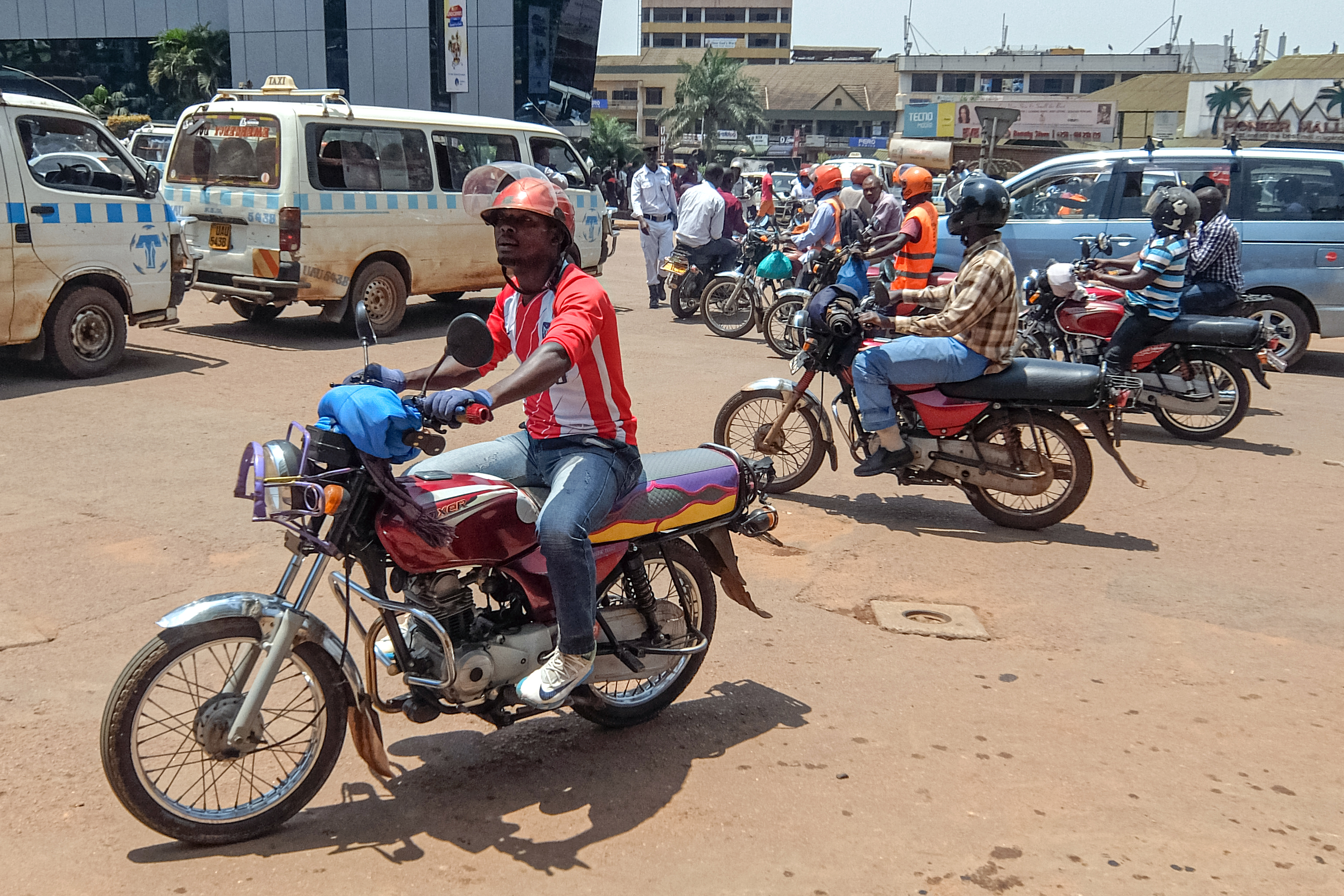 KAMPALA, UGANDA — Sarah Nyakaishiki is not a child, but she tosses in her bed. Her right leg is fitted with a metallic peg that holds her bone in place.

As uncomfortable as she is now, Nyakaishiki is lucky to be alive. In January, she was on the back of a boda boda – a motorcycle that operates as a taxi – when it collided with another boda boda. Nyakaishiki says she was thrown to the pavement and was left with a deep cut in her leg. Both boda boda drivers left the scene immediately.

“The doctor says I will be in this condition for three months,” she says, grimacing with pain.

So far, she says, her medical bills total 1.36 million Ugandan shillings (about $360). Friends and family members have helped her pay them.

That was months ago. Nyakaishiki’s metallic peg has since been removed. She uses crutches to move around. 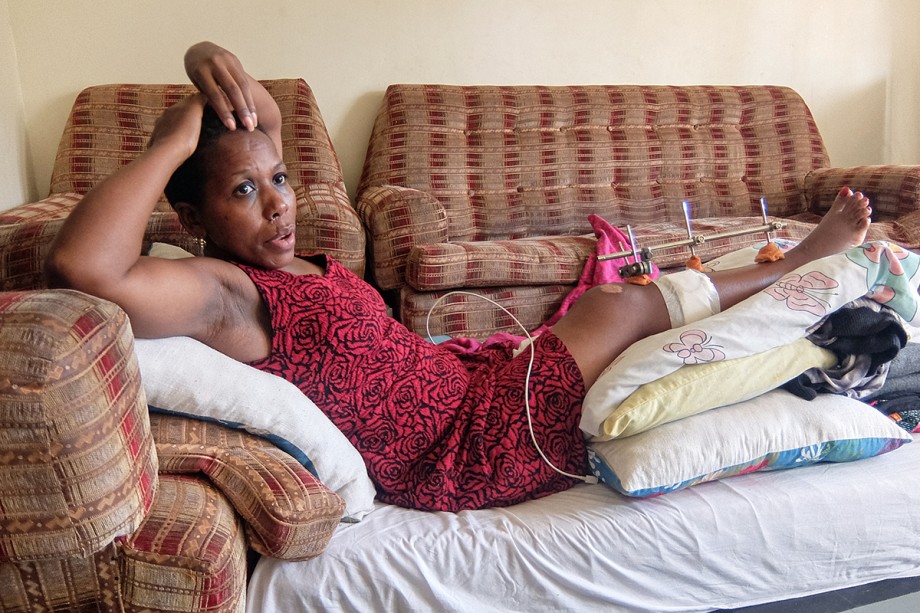 Sarah Nyakaishiki, pictured at her home in Kampala, Uganda’s capital, in March, was seriously injured in a boda boda accident two months prior. The driver of the boda boda ran away after the accident, leaving her to bleed on the road.

In Uganda, boda boda drivers are required to hold third party insurance, but they often don’t. When accidents occur, it’s common for those drivers to leave so they can avoid being attacked by bystanders. The drivers say they’re blamed, whether or not they are at fault.

“We are condemned men by the public, whether we were in the right or wrong,” says Julian Asiimwe, a boda boda driver. “The public believes in mob justice, so we must flee the scene.”

The mob, as Asiimwe calls it, might rough up the driver or steal his motorcycle. In the worst cases, the driver is lynched.

The drivers don’t necessarily fare better when police get involved. They might be violently attacked by police or arrested.

Anthony Mateega, the motor and marine manager at Statewide Insurance Company, says his firm offers premium boda boda insurance for 47,000 Ugandan shillings (about $12.73) per year. That insurance covers medical fees of anyone who is injured in an accident involving the boda boda.

But many boda boda drivers and riders aren’t aware of the law requiring the drivers to buy third party insurance, Mateega says.

There are more than a million boda bodas in operation in Uganda, but more than half of them are not registered, says Immaculate Natukunda, a principal licensing officer in Uganda’s Ministry of Works and Transport. 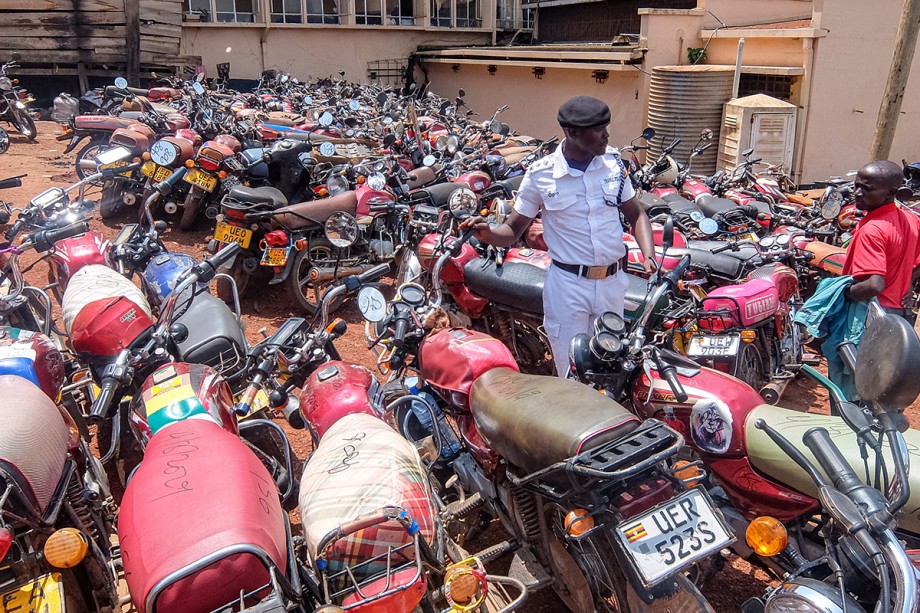 Opio shows off boda bodas that have been confiscated after traffic accidents.

Andrew Opio, the deputy office commander for traffic in Kampala’s metropolitan area, says his office records more than 300 boda boda accidents in that area every month.

About one person dies each day in a boda boda accident in the Kampala area, according to police traffic reports.

Boda boda drivers are “cantankerous,” says Elidad Kansiime the managing director of Multiplex Limited, the company that manages parking in the city of Kampala.

“They do not respect traffic rules and they cause havoc and run away,” he says.

Asiimwe, the boda boda driver, acknowledges that he doesn’t stick around when an accident happens. If he did, he says, he’d be arrested for failing to have a helmet, a permit and other essentials.

“I can never bring myself face to face with the police,” he says.