Skip to main content
The story you are reading was published on Sunday April 23, 2017. To read more recent stories click here. 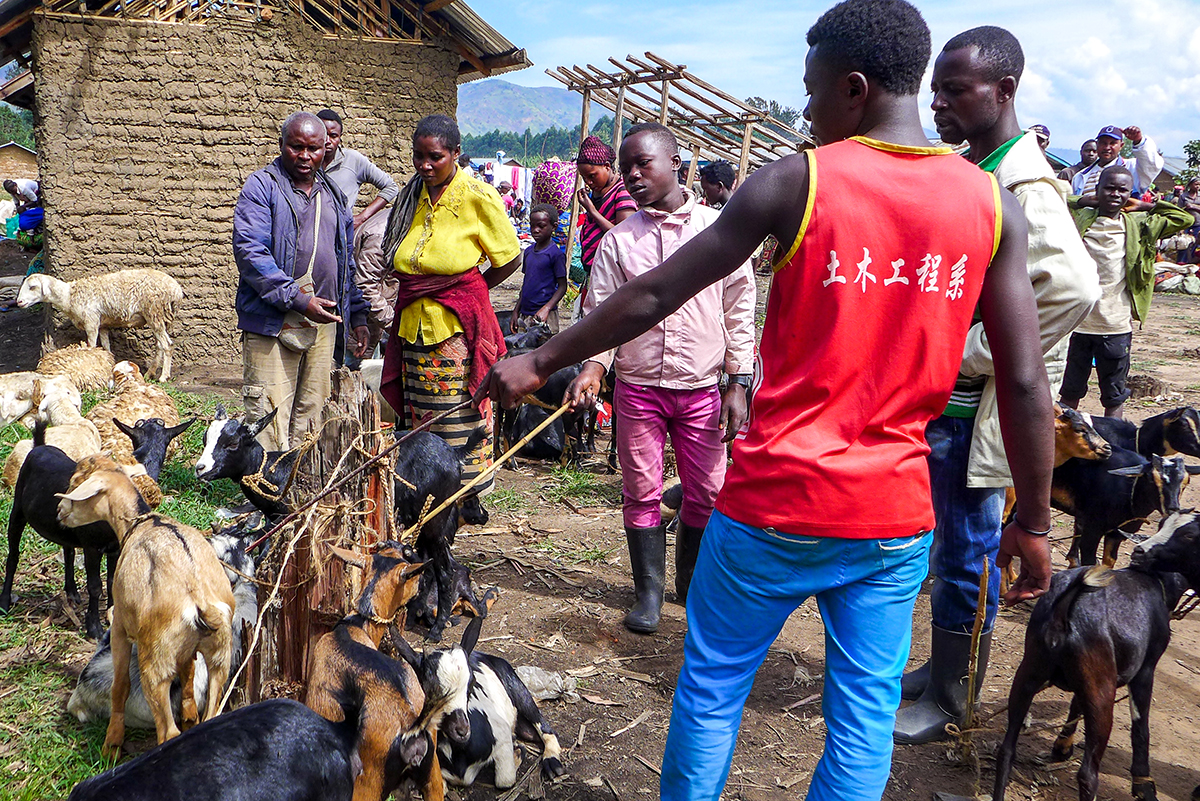 LUOFU, DEMOCRATIC REPUBLIC OF CONGO — In a meeting hall of the Comité D’Observation des Tensions Sociales in Luofu, 180 kilometers (110 miles) north of the regional capital, Goma, people gather to discuss ways to restore peaceful coexistence among varying communities that have seen conflict for more than two decades.

André Hanyurwifura Sebujumba, 55, head of Kyuto, 14 kilometers (8 miles) west of Luofu, confirms the presence of Hutu and Nande communities in his village and contends that the groups had peacefully lived together for years until Rwandan Hutus began settling there after the 1994 Hutu genocide against Rwandan Tutsis.

INSIDE THE STORY: Bloody fighting between the Hutu and Nande communities in DRC has impressed upon this reporter the duty to appropriately inform her community and government and to make the voice of all in the Congolese community heard. Read the blog.

Sebujumba is one of 12 leaders, six from the Nande community and six from the Hutu community, uniting in an attempt to reduce tensions between the groups. He and other local people have been saddened that living together has become strained, and they wish that a quick fix to the conflicts were possible.

Conflicts emanate from the appropriation of lands, and the disputes often have spilled over into many facets of life with a cohort of consequences: massacres, rape, burning down of houses, crop theft, mass displacement, overcrowded host villages, food insecurity and children who are not in school.

The community leaders invite participants from differing tribes to meetings where together they consider the dire consequences of the conflicts, including the losses in their own families, and begin dialogues on how differences can be settled peacefully as they arise.

“No one needs to be reminded of the need for an interethnic dialogue for the communities to acknowledge each other’s pain and responsibility in a bid to work together to heal the wounds,” Sebujumba says. 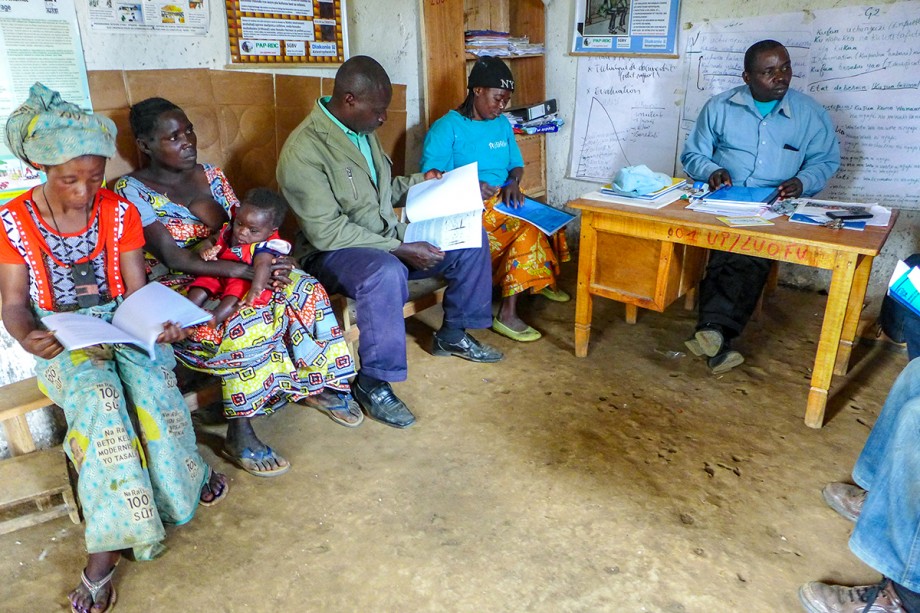 André Hanyurwifura Sebujumba (right), 55, head of Kyuto village, leads a meeting on how to defuse conflict in Lubero territory, in the Democratic Republic of Congo’s North Kivu province. By asking those from different ethnic groups to ignore rumors and discuss disagreements, leaders are working to unite the communities and avoid further violence.

Two Decades of Conflict
After the 1994 genocide against Rwandan Tutsis, an estimated 1 million Rwandan Hutus fled across the border to DRC. Rwandan Hutus who settled in Lubero territory mingled with Congolese Hutus. The fusion of the two Hutu groups from Rwanda and Congo allegedly fuels Nande – Hutu conflicts.

While in Rwanda the government has set out laws to downplay tribal affiliation after the genocide there, conflicts in rural areas of DRC have escalated to such a point that a Nande child cannot attend the same school with a Hutu child; nor can they attend the same church. “Nandes cannot pray in the same church with Hutus,” says Sebujumba.

The situation has, once again, degraded since 2015, and prejudice results when people associate the violent acts of some members of a group with all members of the group. Sebujumba says that between 2015 and 2016, 128 were killed in Lubero, which culminated in food shortages and excessive levels of insecurity and fear.

The Push to Defuse Conflict
In the face of these troubles, nongovernmental organizations currently support educational campaigns, such as the Luofu meeting, for peaceful coexistence between these communities.

The meetings are part of a project to identify and defuse conflicts in Rutshuru and South Lubero, according to Nzuva Mwangaza, Conseil Régional des Organisations non-Gouvernementales de Développement, the regional council for nongovernmental development organizations.

The project’s main objective is to support representatives who know their own communities’ problems and the sources of conflict.

No one needs to be reminded of the need for an interethnic dialogue for the communities to acknowledge each other’s pain and responsibility in a bid to work together to heal the wounds.André Hanyurwifura Sebujumba, 55, head of Kyuto, a village more than 100 miles north of the regional capital, Goma

Mwangaza says that two committees already exist to identify causes of conflicts and make recommendations to authorities. Should conflicts break out, the committees engage with the differing parties.

Emmanuel Mulindu, 49, chairman of the Comité D’Observation des Tensions Sociales, reminds those at one of the meetings that the many communities in Luofu village — notably, the Nande, Hutu, Kobo, Nyanga, Rega, Bashi and Hunde — once lived harmoniously.

But he notes that conflicts between the groups — particularly the Hutu and the Nande — are commonplace. “There is need for a dialogue that could allow us to live peacefully,” he says.

Astrid Kavugho Mutaka, 50, was quick to point the finger at Hutu refugees. “In Luofu, we used to live in peace – not in pieces with all the other communities. But when the Hutu came, they wanted to occupy our lands by force, thus igniting the fires of ethnic conflicts,” she said.

But a dialogue continued as Feza Ayinkamiye, 39, a member of the Hutu community in Kyuto village, said she takes a critical view of hatred between the two communities and holds out hope that increasing efforts toward peaceful coexistence among youth will help to fix things.

“I trust that future generations will live in a peaceful world free from any form of discrimination,” she said.

Committee on Peaceful Coexistence
Joseph Muhindo, head of the civil society in the village of Luhanga, about 20 kilometers (nearly 13 miles) northwest of Luofu, says a Jan. 20 meeting arranged by the U.N. Organization Stabilization Mission (MONUSCO) between Hutu and Nande villagers provided an opportunity to put in place a Committee on Peaceful Coexistence between the two communities.

The 12-member committee consists of artists, church leaders and local authorities, like Kyuto village head Sebujumba, to lead the reconciliation process and to spread a message of unity. The committee is asking residents of all tribes to refuse to associate with rebel groups, Muhindo says.

“During the meeting, participants noted, among other issues, the need to foster harmonious interethnic relationships and unity, raise awareness of peaceful coexistence and togetherness, and refrain from spreading rumors,” he says.

Calls to Enforce Laws, Punish Criminals
While dialogue is an important way to prevent conflict, Sebujumba and Muhindo also call upon the government to fulfill its responsibility to restore safety and security.

“Also, the onus falls on MONUSCO to maintain peace, not conflicts,” he says.

Muhindo hopes activities and dialogues throughout the area will result in peaceful coexistence between Hutu and Nande villagers.

“The act of making people realize that segregation based on ethnicity should no longer have a place in our community is a long process,” Muhindo says. “For now, we are trying our best to sensitize people about peaceful cohabitation using messages of peace and reconciliation.”

The message, he says, is: “Let’s focus on important things, especially the fight to pave the way for the emergence of our economy, rather than wasting our strength killing one another.”