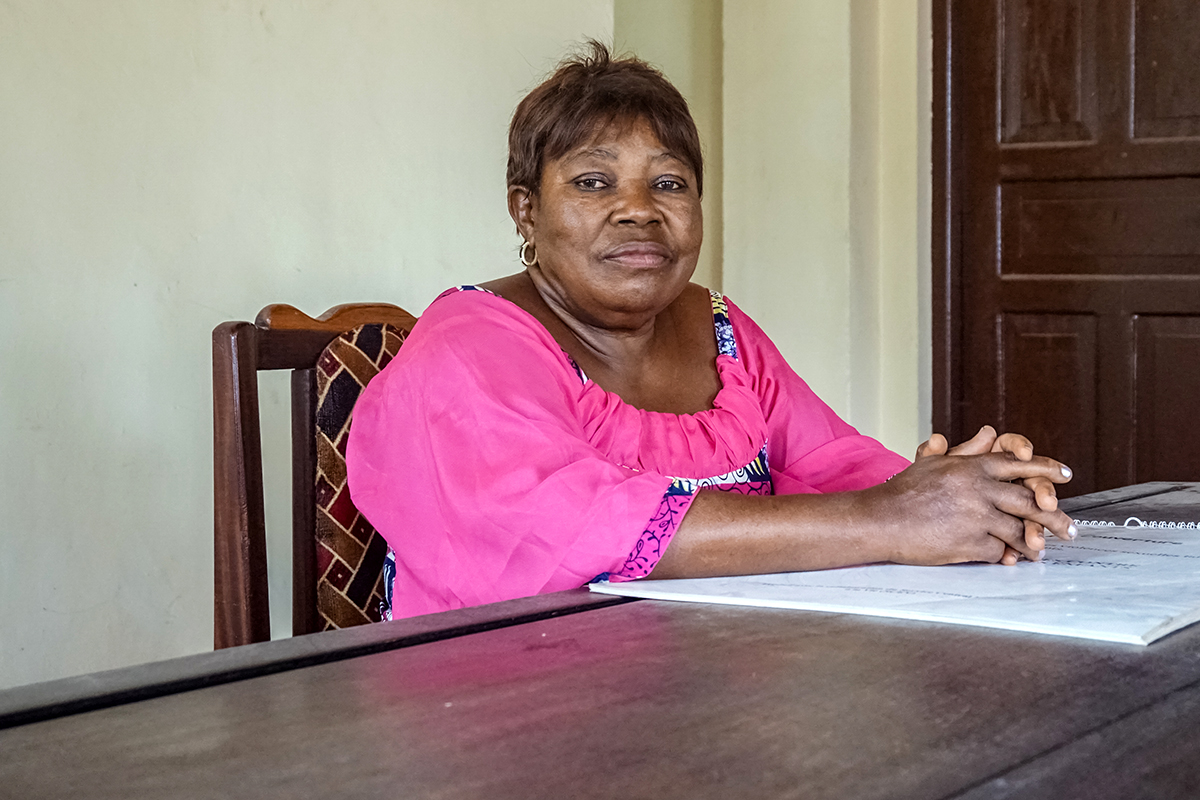 KISANGANI, DEMOCRATIC REPUBLIC OF CONGO — “From the day my husband died, I did not get peace of mind,” says Anna Baolimo Aziza.

The 38-year-old mother of seven lost her husband four years ago while she was pregnant with her youngest child. Shortly after Aziza’s loss, her mother-in-law and sisters-in-law kicked her and her children out of their home, blaming her for the death, she says. According to medical records, Aziza’s husband died in a car crash.

In DRC, widows are often targets of animosity, with in-laws accusing them of witchcraft and claiming they are the reason for the loss of their loved ones. Some demand that widows leave their homes, leaving behind their possessions and money.

Aziza says she was forced to seek help from the local government to return to the home that she and her husband built, a decision that she says is rare among widows in Kisangani, the capital of Tshopo province, despite the widespread eviction practiced by in-laws.

While sexual and gender-based violence is common in DRC, in part because of years of conflict, many experience violence from those closest to them. The stigma associated with rape and other forms of abuse or violence prevent some from seeking justice in court or seeking support from medical and psychological professionals.

The local government, however, is making efforts to support women who experience abuse or violence through its Division du Genre, Famille et Enfants (DGFE), which offers women and girls medical and psychological treatment, as well as legal support against offenders.

Elisabeth Isikisiki Beagaba, who is spearheading the work in Kisangani, says that while some welcome the support, the cultural stigma among others continues to make her work challenging.

An estimated 52 percent of women aged 15 and above in DRC have experienced physical violence, according to the government’s 2013-14 Demographic and Health Survey, the most recent available.

For years, however, some women who experienced violence have not reported the incidents to authorities, says Beagaba, director of the DGFE, which is a unit of DRC’s northeastern Tshopo provincial government.

“In Kisangani, when a husband dies, in-laws descend on the widow and take all the valuables away, kicking her out of her home,” she says.

Beagaba joined the DGFE in 1987 after graduating from the Université de Kisangani with a bachelor’s degree in social science. When she started the job, assisting women who had experienced physical and verbal abuse from family members was a very challenging task, because few used the services the division offers, Beagaba says. Some women are still unwilling to come forward to authorities about their experiences, because of fear that their community members will speak badly of them, she says.

To tackle cultural reservations, Beagaba’s division promotes awareness of physical and sexual violence among women and families in Kisangani. She organizes and hosts seminars and conferences each month to teach participants how to identify the first signs of violence against them and how to be aware of their rights.

An estimated 52 percent of women aged 15 and above in DRC have experienced physical violence.

Beagaba says she also refers women who have experienced violence and mistreatment from family members to free legal counsel or to the local court.

In several instances, women who have experienced violence or assault have the right to have their cases heard in court, but many of them are unaware that they can do so, says Balthasard Lisambola, a Kisangani-based attorney.

“Anyone who by means of violence, deception or threats commits indecent assault upon a person of either sex can be sentenced to six months to five years in prison,” Lisambola says, referring to Article 168 of the country’s criminal code.

Between 2010 and 2015, 30 to 53 cases of domestic violence were filed every three months with the Tribunal de Paix de Kisangani, a local court sometimes called “TriPaix,” Beagaba says. But since June 2016, she says, only three to four cases have been filed every three months. Frequent seminars have contributed to the decrease in filed court cases because attendees, both men and women, have gained a better understanding of the law, Beagaba says.

Marie Jeanne Mukasa, a 44-year-old mother of three, says her in-laws started mistreating her after her husband’s death in April of last year.

“My in-laws came in to take it all away and drive me and my kids out of our home, just two weeks after his death,” she says, referring to her furniture and other household items. Mukasa says she turned to Beagaba’s division to have her case referred to the local court. After months of living in her parents’ home, a court ruling in December allowed her to return to her home and required that her in-laws return her belongings, Mukasa says.

But not all of the cases referred to the court include instances of physical violence against widows, Beagaba says. In some of these cases, plaintiffs tend to rely on testimony from neighbors and relatives, who confirm verbal abuse from in-laws. But the threat of being stigmatized by the community can sometimes discourage witnesses from speaking openly, she says.

Beagaba says her division must remain persistent to continue to see progress.

“My goal today is to continue fighting all forms of violence suffered by widows as a result of the injustice of their in-laws,” Beagaba says.