Skip to main content
The story you are reading was published on Monday August 31, 2015. To read more recent stories click here. 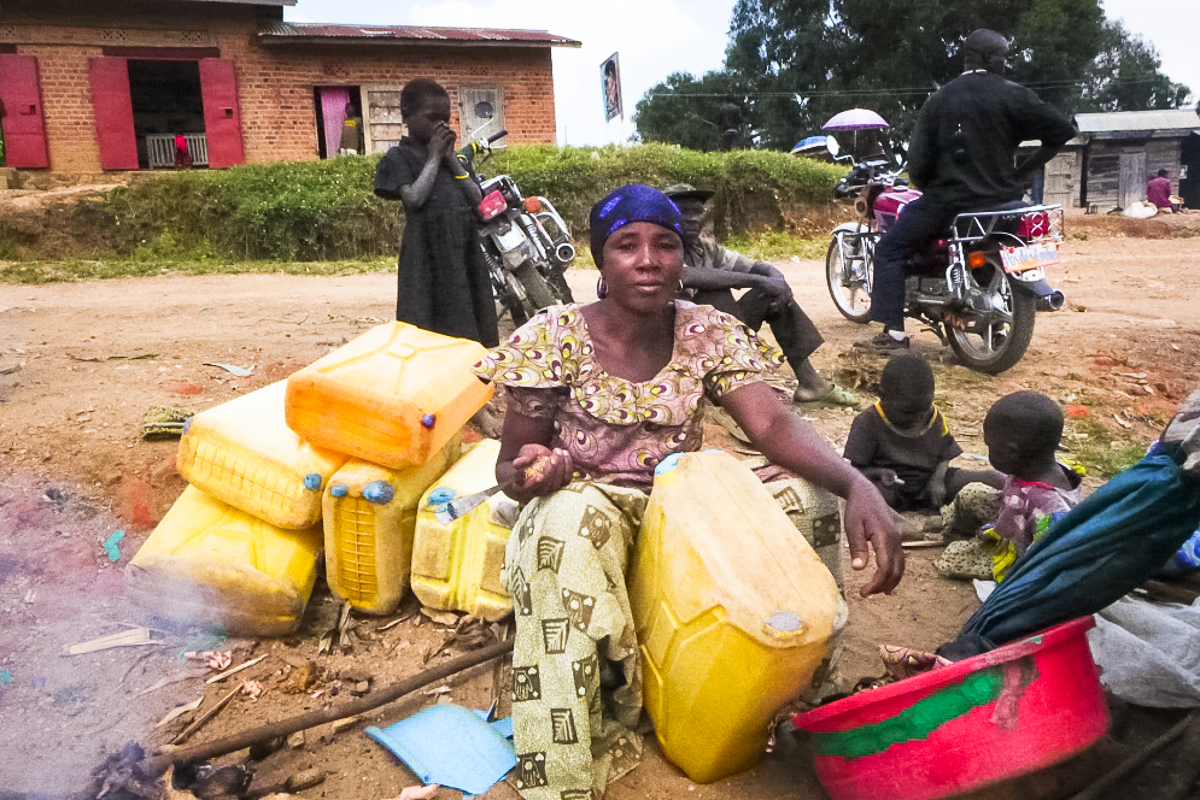 Every day, the trek is the same. Women fill their giant yellow jerry cans in the Cyahulwa River, the community’s only water source, and lug them home tied to their heads and backs. The walks can take hours. The full jugs are heavy. A family of four uses at least 5 gallons of water each day. And in a country with an average annual income of $410, the $2 jugs are prized commodities.

Kirumba is a rural town, 117 kilometers (73 miles) from Goma, the capital of DRC’s North Kivu province. The town sits in the forest of Virunga National Park, which abuts DRC’s borders with Uganda and Rwanda.

The near-constant conflict over tribal tensions and the bounty of minerals here has left as much as 40 percent of the population of eastern DRC widowed, according to Widows for Peace through Democracy, an advocacy group.

Instead, she became what’s known locally as a chaudronnière, or boilermaker. But she doesn’t weld metal; she collects plastic scraps and “welds” them onto damaged water jugs. Repairing water jugs is a lifesaving profession here, residents say.

Karupia is the first woman in town to become a chaudronnière.

Everyone in Kirumba uses plastic containers to transport stream water for cooking, cleaning and drinking. The hand-me-down bottles sustain the wear and tear of the townspeople’s rugged daily journeys.

In fixing the bottles, Karupia salvaged her independence too, she says. Karupia can repair as many as 50 jugs a day. She charges 100 francs (11 cents) to patch each hole, 200 francs (22 cents) for a large one.

Although DRC holds more than half of Africa’s water reserves, 51 million residents – three-fourths of the population – lack access to safe drinking water, according to a 2011 U.N. Environment Program report. Most of those residents live in rural areas such as Kirumba. An estimated 36.5 million residents of rural DRC did not have access to safe drinking water in 2010, the report says. They risk contracting deadly diseases, such as cholera, by drinking untreated water from rivers, lakes and streams.

Every morning, Karupia combs the streets of Kirumba in search of plastic scraps.

Surrounded by piles of taxi-yellow jerry cans to be mended, Karupia lights a fire. With a knife, some firewood and a patchwork of plastic, she gets down to work doctoring the jugs. By the time she gets to the last jug in the pile, her hands are hot and covered in black soot and ash. She gets burned sometimes.

But it’s worth it. Karupia is earning a reputation as the best at her trade.

Karupia learned the craft at a workshop in Kikuvo, a village 8 kilometers (5 miles) away, where she used to live. She worked hard to perfect her craft, she says. Now she travels through the surrounding markets, fixing the coveted water jugs wherever she goes.

“I love my job,” she says. “I approach it with the right frame of mind. It gives us food, clothing, medical care and even rent.”

Since her husband’s death, Karupia has cared for her four sons alone.

Other women often chastise her for doing this work, she says. But she disregards them, responding, “Haven’t you ever seen a military wife?”

Karupia sees no reason why she shouldn’t master her craft.

“In life, there is no formula,” she says. “I want to demonstrate that there is no such thing as a stupid job that earns you a living.”

Salima Kasereka, president of the local chaudronniers union, calls Karupia a master of the craft.

“She does it more carefully than we men,” he says. “Now she only needs more tools to better serve the population.”

“I appreciate the way Karupia repairs cans and bottles,” says customer Mbweki Mwindiki. “I am trying to fight for her and even bring her other customers.

Muhindo Kabuyaya, a Kirumba resident, says it shouldn’t be surprising to see a female chaudronnière.

“If there were also women masons, why not this?” he says. “We do not own the trades.”

But some people believe women, especially widows, are not right for this trade.

“I have never gone to Karupia,” says Masika Mitaberi, a Kirumba resident. “It’s not for women to do. She must be too lazy to work in the field.”

“After a husband’s death, the whole community might not be concerned with the widow or the children,” she says.

But now that Karupia has proved to be good at her trade, the community is supportive of her career, Karupia says.

“I love my profession,” she says.

“If all women had the spirit of creativity like Karupia, our country would be developed,” he says.