Skip to main content
The story you are reading was published on Friday September 15, 2017. To read more recent stories click here. 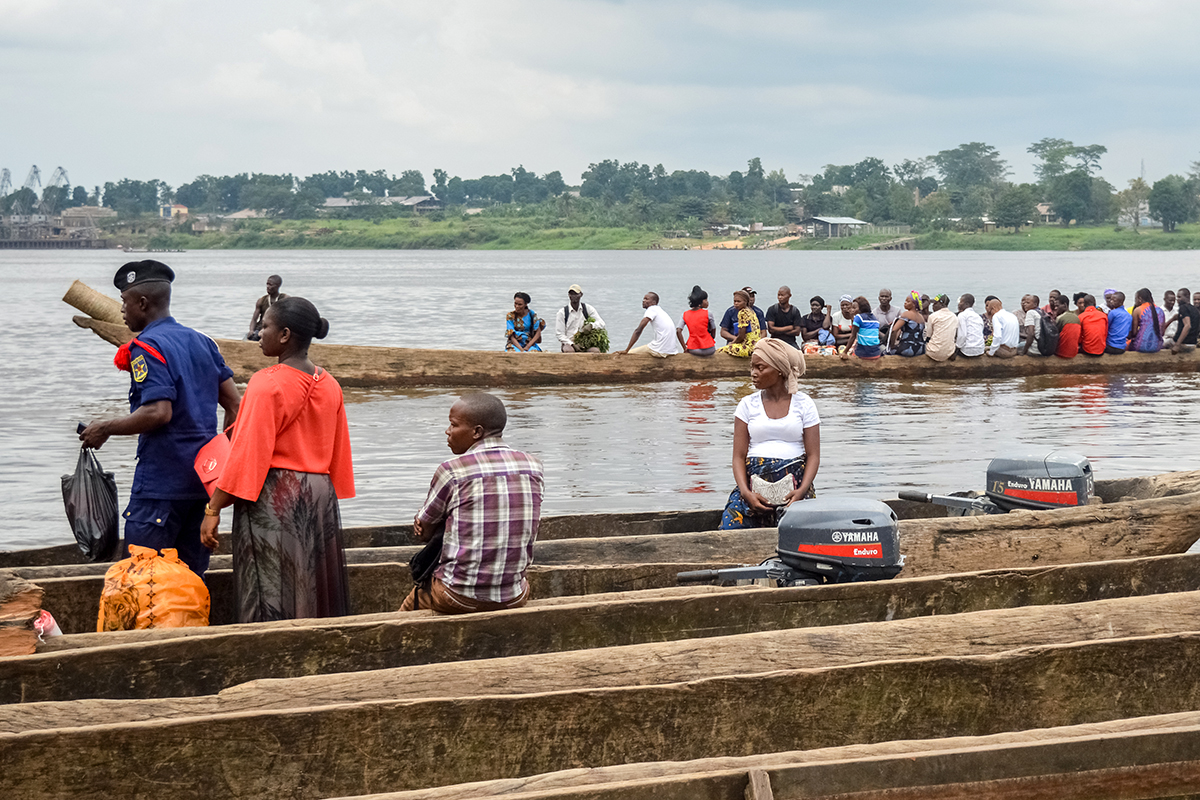 KISANGANI, DEMOCRATIC REPUBLIC OF CONGO — The Congo River is dotted with wooden boats.

The boats are filled with people or with food — sometimes both.

One of the many long, wooden boats in the river belongs to Dido Mboka, a father of 15, who says trade along the river is the only lifeline for many residents of Kisangani, the capital of DRC’s Tshopo province.

Doing business on the river has been his primary income for the last seven years.

“For those of us who can’t afford an air ticket, the river is and remains the only alternative,” Mboka says, adding that Kisangani is an isolated city, cut off from much the country because roads are not safe and air travel to the capital, Kinshasa, is too expensive for most. “For under $350, you can’t get a one-way flight from Kisangani to Kinshasa, while boat travel costs as little as $50 per person.”

The average annual income for people in DRC is $400, according to the United Nations country profile.

From trade to transport, the river is the center of life and livelihoods here. But boating fatalities are frequent. 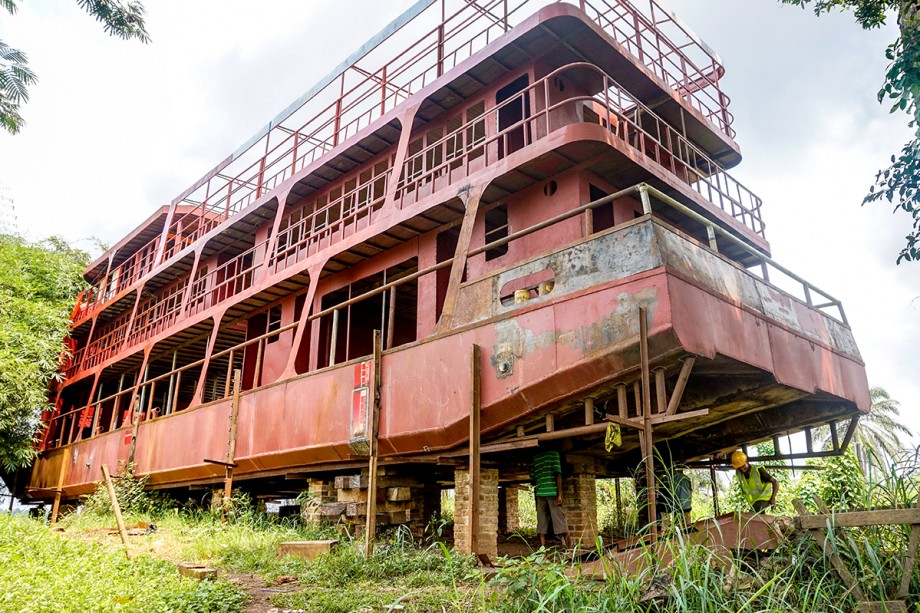 Local businessman Barnabé Mupira’s ferry, which he hopes will offer a solution to the river safety crisis here, is under construction. He says the boat will set sail in early 2018.

Mboka says the river-worthiness of most boats leaves a lot to be desired. They are often old and rickety, but to increase income, captains are prone to overloading their boats with a mix of both people and goods. The boats also travel long distances, selling goods along the river banks for miles or traveling the 1,750 kilometers (1.087 miles) to Kinshasa, which is an area of the river considered to be the most navigable, but can still be dangerous in a loaded canoe. There are no rules or supervision about what is and isn’t allowed on the river, he says.

Celestin Lisako Mokonji, a river commissioner at the transportation department in Tshopo province, says there have been at least 32 deaths because of boating fatalities on the Congo River since 2015. But most deaths go unreported.

“I’m alive today only because of God’s grace,” Mboka says of several near-death incidents in wooden boats. “Several of my colleagues have lost their lives, going missing while traveling by boat. And as if that wasn’t enough, finding and burying their bodies remain a vain hope.”

But local businessman Barnabé Mupira is working on a solution to the river safety crisis that he says will reduce deaths on the river.

As a well-known local soap manufacturer, Mupira is a recognized innovator in Kisangani. As a child, Mupira says he remembers working on the banks of the river and dreaming about building a safe and luxurious boat for his fellow Boyomese, the name used to refer to people who live in Kisangani. 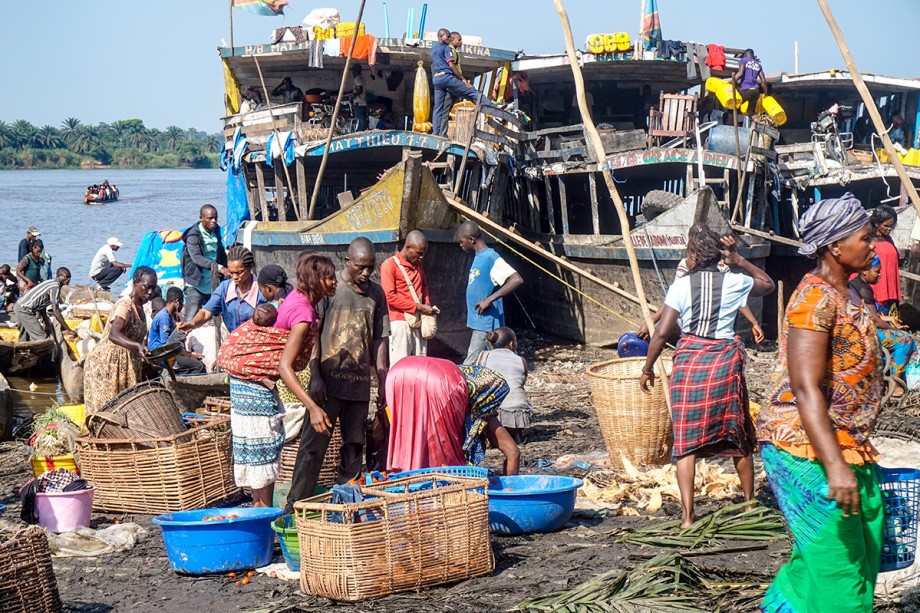 Barnabé Mupira says that his ferry will alleviate overcrowding on the many boats that travel up and down the Congo River every day.

Today, from the banks of the river, the three-tiered, red metal ferry boat is under construction, but in plain view. This boat, he says, will change the way people travel and do business on the river.

“I’m going to spend a lot of money on this boat, but it’s worth it,” Mupira says, adding that he hired a boat engineer to help him design and build the ferry. “I am proud to make the traveler’s life across the river more enjoyable.”

While he says the boat will cost him a small fortune to build — he declined to specify the amount he is investing in the boat’s design and construction — he says it’s time to remove the uncertainty and the fear from daily life doing business on the river.

“People who travel on old-fashioned boats are seated horribly,” he says. “They’re jam-packed, not having an inch in which to move and struggling for air. I, too, traveled on and had a very bad experience with such boats.”

By contrast, his boat, which is set to be finished in by January, will seat 400 passengers comfortably and offer amenities. It will also drastically reduce the time needed to travel long distances.

“The old-fashioned boats usually take one month to travel from Kisangani to Kinshasa, while this one will take five days only,” he says, though there are a few more expensive options popular with tourists. “In my boat there will be a restaurant and people will be able to travel easily because it has three levels.”

The boat will travel from Kisangani to Kinshasa twice a month. It will stop at many villages along the way to pick up and drop off freight and ease transactions for small-scale sellers.

Papy Basomboli, a freight handler, says the new boat will change things for everyone. The Congo River remains his source of survival. He earns 10,000 Congolese francs ($6.50) per day.

“I rely on this river to feed my family,” he says.

Marie Wele, a widow, has been a trader on the river for 10 years now.

“Far too often, boat’s operators or captains understate the number of passengers when reporting to commissioners, saying, for example, that 50 or less passengers are on board when the exact number of those aboard is 100,” she says. “This new, modern boat will be an answer to our woes, and we’re anxiously waiting for it.”

Christophe Lisalu, a boat control officer along the Congo River, says officials too are eager for the new boat to be completed. He expects it will boost trade and even help to decrease prices in Kisangani, where basic goods are often expensive because of the few travel options to reach the city.

“The high speed of the new boat will have a considerable impact on the development of our city, and help people fast-track their business,” he says.

Mupira agrees. He says his boat will help the whole city advance.

“My boat will help traders travel safely and reduce travel time,” he says. “Also, my ticket prices will be pegged at a level that will make every passenger’s trip more affordable.”

Local businessman Barnabé Mupira’s ferry, which he hopes will offer a solution to the river safety crisis here, is under construction. He says the boat will set sail in early 2018.

Mboka says, as do his colleagues, he would like to see traveling by river made safe as a precondition to improving business conditions.

“We call upon the government to adopt measures to facilitate the smooth running of river trade, and ensure the safety of passengers aboard our boats,” he says.

Mokondji, who also supervises boating activities on the Congo River in Kisangani, says the transportation department is closely monitoring the construction of Mupira’s boat.

“From the time Mupira started to construct his boat we supervised him,” he says. “Every two weeks we must pay him a visit to see the evolution of this boat.”

Once the boat is finished, Mupira’s boat must pass a certification test signifying it is ready to carry passengers and will be assigned a weight limit, Mokondji says.

Mupira has not yet announced the cost of a trip on the ferry.

He did not want to talk about the price of the trip on his boat now but he promises that it will not be expensive.

“I cannot communicate the price because the construction is not finished,” he says. “I will announce it on launch day when people will be seeing this wonder.”