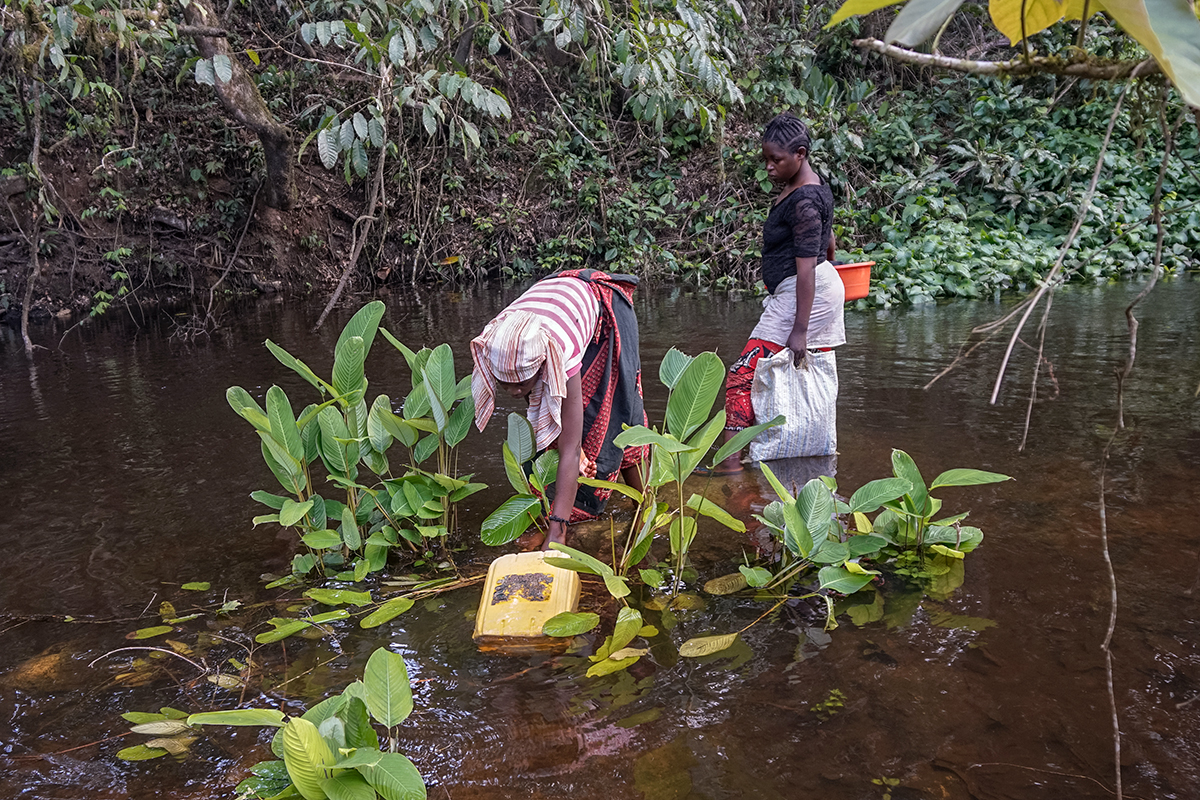 KOMANDA, DEMOCRATIC REPUBLIC OF CONGO — Women who live in camps for internally displaced people here in Democratic Republic of Congo’s eastern Ituri province say it’s always been tough to get the reproductive healthcare they need.

But these days, ever since an organization that provided free medical care pulled out of the region, the challenges are even greater.

“The health status of mothers and children is getting worse with each passing day,” says Esperence Chachimwa, a cleaner at the camps.

There are five camps here, which together are home to an estimated 5,500 people. They come here to escape violent conflict between communities, oppression by armed Mai Mai groups seeking to control territory and resources, and because their own villages are vulnerable to bandits who emerge from the forest to rob them blind.

There are people on the move all over this forested region, whether because armed groups have pushed them from their homes or because government forces are engaged in conflict. Some camps for internally-displaced people (IDPs) are organized and equipped with resources. Others pop up organically when the need arises.

The people in the camps in the town of Komanda say they feel more at ease than they did in their home villages, but that doesn’t mean life is easy.

Heavily pregnant women are often seen doing tough, physical work in the camps. Some till land while others transport produce from fields to the road. This is the kind of strenuous exercise that women are discouraged from doing while they’re pregnant.

Tchina Tchelewa, a 25-year-old resident of Baiti camp, says many lose their babies as a result.

“Those physically demanding tasks we perform all day long without even eating anything at all are the culprit behind frequent miscarriages,” says Tchelewa, who was seven months pregnant at the time of this story’s reporting.

Sanitation in the camps is poor. Each camp has a large pit latrine with five toilet areas – not nearly enough for these growing communities.

Women say it’s easy to contract vaginal and urinary infections. There’s no medical care, so even basic health issues can only be treated with what’s available.

The health status of mothers and children is getting worse with each passing day.Esperence Chachimwa, a cleaner at the camps

Tchelewa says she turns to other mothers in the camp when she has a physical problem. The remedies they suggest are extremely low-tech.

“They advise me to squeeze lemon juice into the water I wash my body with,” Tchelewa says. “It was really a great help to me, because our access to health care is tougher now than ever before.”

Since 2005, free medical care had been provided by an organization called Medair, funded through Caritas, the health center of the Catholic Church in Komanda. But the funding for that care was cut off in 2017. Now, women must pay 5,000 Congolese francs (about $3.05) for each prenatal care visit.

So, just as Tchelewa uses lemon juice to soothe pain, many women also give birth on their own, with whatever tools they have on hand.

The women know that giving birth at home in the camp poses serious risks, but they say traditional midwives are their only solution, despite those midwives’ poor track record.

“Many have lost their lives during midwife-attended births,” says Julienne Ndungo, who lives at one of the camps.

For this reason, the national government bans traditional midwives, who often don’t own proper equipment, from attending home births. They encourage women to go to hospitals instead.

One traditional midwife, who goes by the name Kadada, told GPJ that she and other midwives manage to evade detection in the camps.

“We continue to practice under the radar, because health authorities prohibit the practice,” she says.

Kadada asked that her full name not be used because what she does is illegal.

Faustin Aribande, head of a camp located in the courtyard of the Communauté Baptiste du Congo church in Komanda, says there are more than 1,000 mothers between the five communities. He says around 10 medical abortions (via a pill or some other non-surgical option) and three maternal deaths occur each month, though more unsupervised abortions could be occurring without the knowledge of camp authorities.

Even if reproductive health services were free, some women say their husbands don’t want them to use contraceptives.

“I’ve nine kids, but when I told my husband that I wanted to prevent pregnancy once and for all, he flat out refused, saying I’ll continue to give birth until there’s no single egg left in my ovaries,” says Wasingia Siheria, 40. Siheria says her husband believes she’ll be unfaithful to him if she uses contraception.