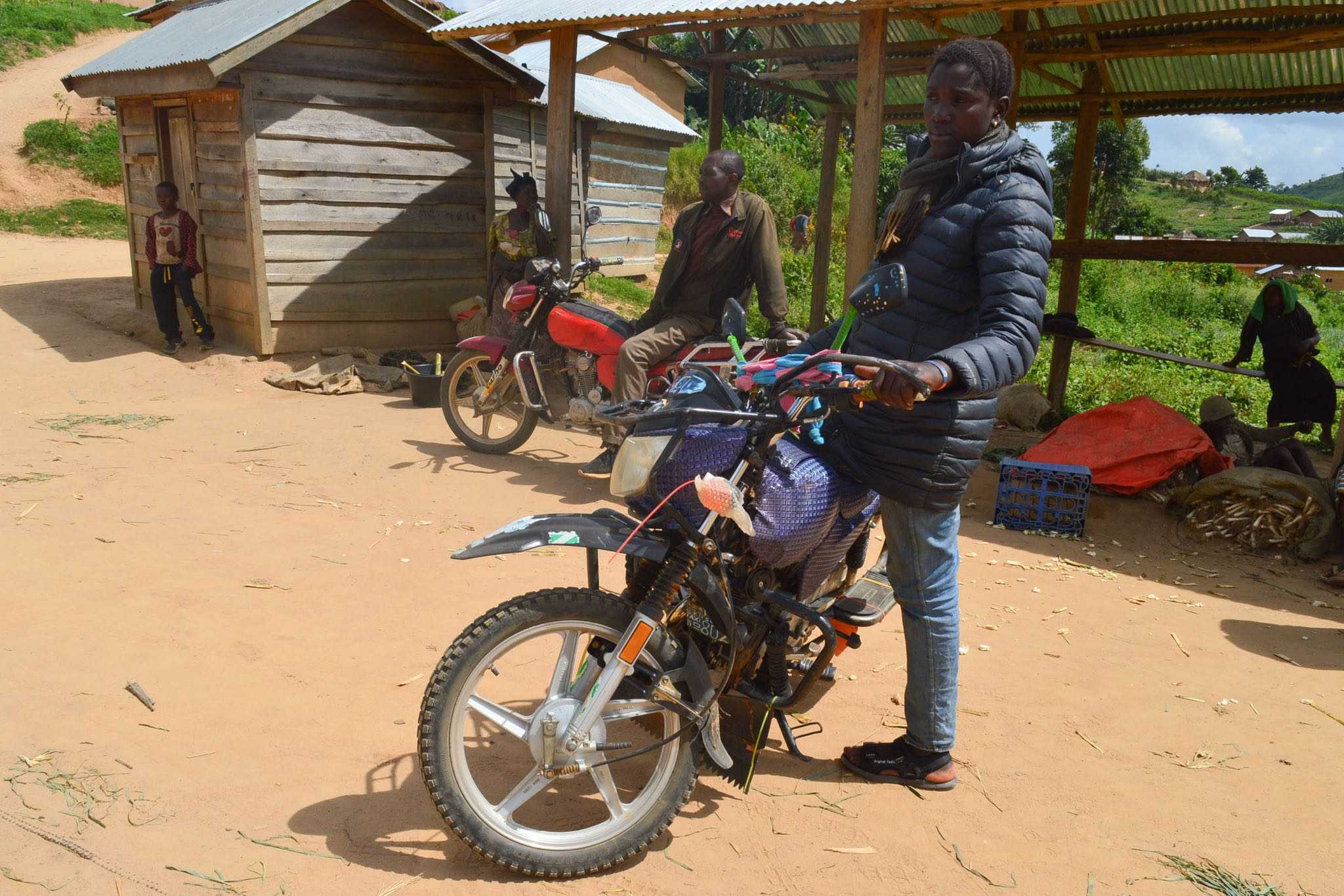 LUBERO, DEMOCRATIC REPUBLIC OF CONGO — People have warned Esther Katungu Kisumba against riding a motorbike. Some have told her it might affect her ability to have children. Others have said she has no business being a motorcycle taxi driver. It’s a man’s job after all. Many have doubted her skills and refused her transport services.

Sometimes, when children see her riding a motorbike in Kasingiri, a village north of Kirumba, southern Lubero territory, they stop to stare. Adults, too. At the motorbike parking lot where she and her colleagues — all men — chatter away waiting for customers, Kisumba is a rare sight.

Although motorcycles are a common mode of transportation in many parts of rural DRC, it is highly unusual to see women motorcycle taxi drivers. It’s equally strange to find a woman riding a bicycle. But Kisumba defies expectations.

The 22-year-old started working as a motorcycle taxi driver in January 2022, after another driver trained her. “I’ve always wanted to drive vehicles ever since I was a child. I first started to learn how to [ride] a scooter, then a bike,” she says.

Her challenges exemplify the way traditional gender roles still hold sway in many parts of DRC and continue to stunt women’s participation in the country’s economy, despite efforts by various stakeholders to change this.

In DRC, women still lag behind men in many metrics. Although they make up 50% of the country’s population, according to 2021 World Bank data, they are underrepresented in politics. In 2019, only 12.8% of the National Assembly and 23.85% of the Senate was made up of women, according to data from the Inter-Parliamentary Union, a global organization for national parliaments across the world.

While 48.5% of DRC’s labor force is made up of women, they are mostly constrained to agriculture, informal jobs and self-employment. According to the World Bank, only 10.5% of women in DRC have waged or salaried employment.

But Marie Kahindo Sivasingana, a facilitator at Umoja wa Wanawake Wakulimawa Kivu Kaskazini (Union des femmes paysannes du Nord-Kivu), a nonprofit that focuses on women’s rights, still sees these as important roles that make a significant contribution to the economy. Even in domestic roles, she says, women already contribute to their households and, by extension, the community.

“Woman is the source of all life. She gives birth. This is [her] first contribution to the economy,” she says. “A country without people could not develop.”

In the past, civil society organizations, the government and international actors have made efforts to address gender disparities in DRC. For example, the amendment in 2016 of the 1987 Family Code ensured that married women no longer needed their husband’s permission to enter legally binding contracts. The law was based on Belgian colonial legislation and Congolese customary law. Before its revision, it barred a married woman from registering for a business, applying for a loan and opening a bank account without her husband’s authorization.

The government also enacted the Law on Parity in 2015 to promote women’s participation in economic, social and political life. Among its mandates is for more public representation of women and access to credit. In fact, DRC is among the few countries in sub-Saharan Africa — less than 20% — whose law calls for equal access to credit, according to the World Bank. 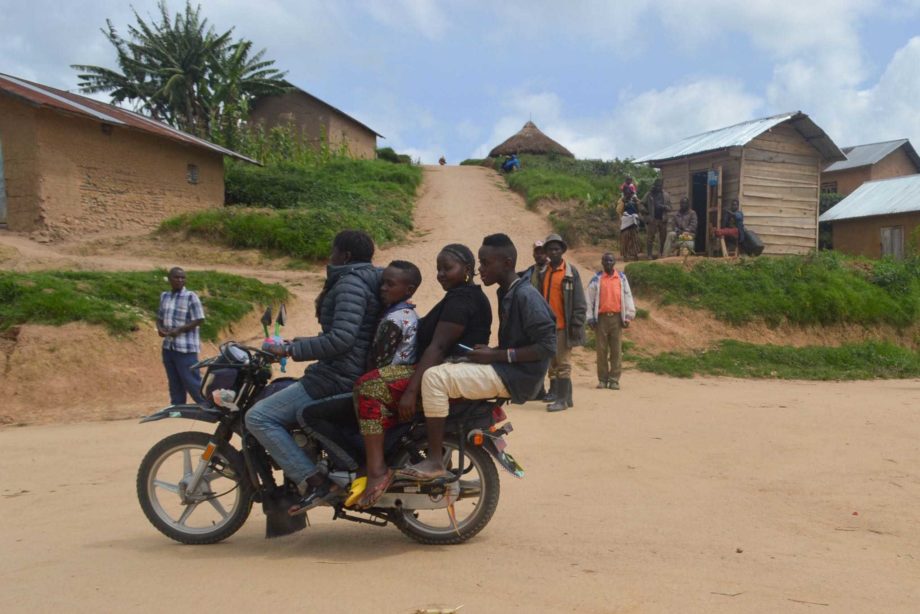 The reforms have led to considerable improvement. In 1971, DRC’s score in the World Bank’s Women, Business and the Law project, which grades countries based on “laws and regulations affecting women’s prospects as entrepreneurs and employees,” was 23.1 out of 100. In 2022, the country scored 78.8.

Gisèle Ndaya, minister of gender, family and children in DRC, did not respond to numerous requests for comment about what the government is doing to improve women’s participation in the economy.

Despite improvements, gender norms are still deeply ingrained in the country’s social fabric, says Kisumba. When she started as a motorcycle taxi driver, customers hesitated. They didn’t trust that a woman would be good at this kind of job. She still encounters them, and it worries her that some are women. “They believe some jobs are better suited to men and others to women. People need to change their mindset.”

Kisumba is determined to change this mindset by training other women. She now has two apprentices. “They came to me directly and are starting to adapt themselves to their new life,” she says.

Kisumba is a member of Association des Taximen Motos et Voitures, an association of motorcycle and car taxi drivers. They welcomed her with open arms.

“She is the only woman in our association, and we encourage her as much as possible. When we took her on board, we gave her a member card and a uniform vest free of charge, which are worth 32,000 Congolese francs [about $16] in total,” says Rochereau Kambale Sikulimolo, president of the association.

Although gender norms are a major contributor to women’s low participation in the country’s economy, there are other reasons, Sikulimolo says. Women must also deal with insecurity, which limits their options. Although insecurity affects everyone, he says, women are much more vulnerable.

In this eastern part of DRC, violence, particularly sexual violence against women, is common. According to United Nations data, within the first 12 years of the conflict that has rocked the region for over two decades, about 200,000 women were sexually assaulted in eastern DRC alone.

It is a risk that Kisumba takes every day. Her parents are farmers and spend most of their time in fields, far from Kasingiri. When they are away, she becomes the family’s breadwinner. So she keeps working.

“We are very reliant on our sister’s job. Her income is so important for us,” says Moïse Muhindo, the youngest of Kisumba’s two brothers.

She holds hope for women as locals slowly change their attitudes. When they see her at work, they must accept that she is as qualified for the job as the men.

Justin Kasereka Lwatswa, a sociologist from Kirumba, commends the progress DRC has made. But there is still room for improvement, he says, adding that public awareness will help ensure that women can take up even more roles. “Society needs men and women to emerge,” he says.

Merveille Kavira Luneghe is a Global Press Journal reporter based in Democratic Republic of Congo.