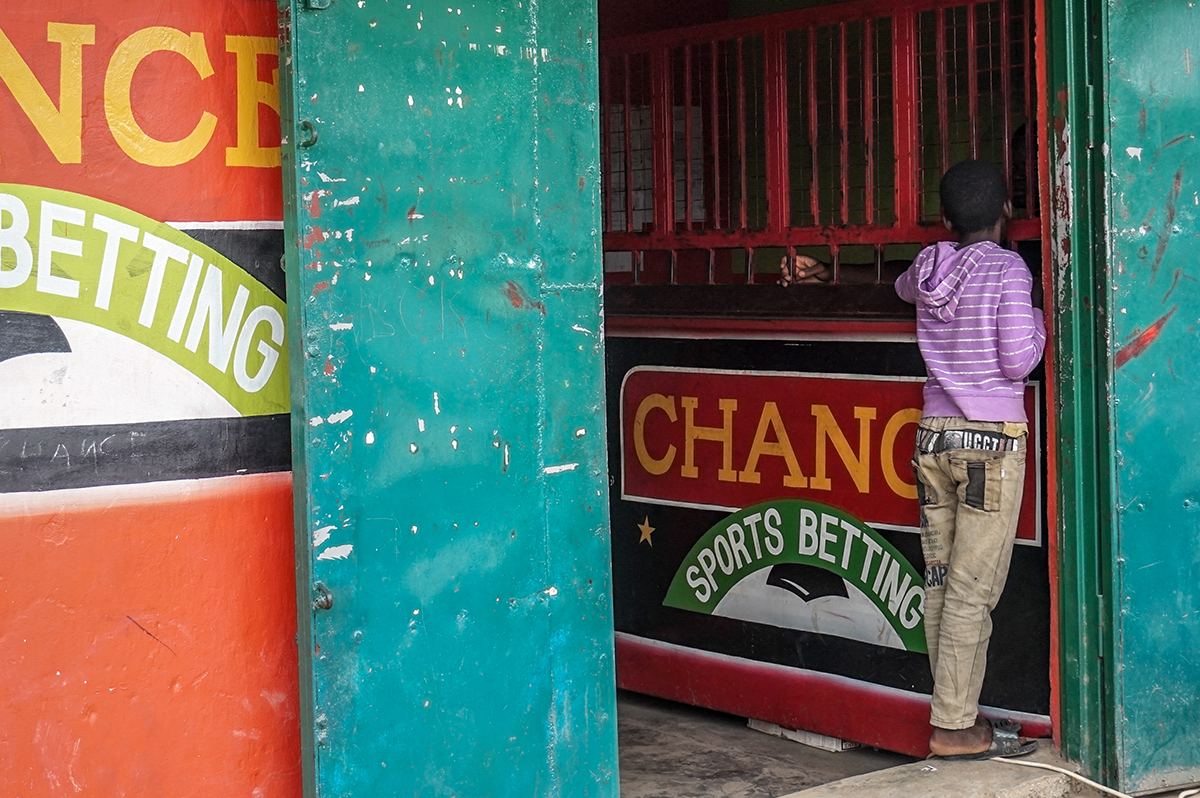 KISANGANI, DEMOCRATIC REPUBLIC OF CONGO — If there’s one sport that 47-year-old Jérémie Ndongala could watch for the rest of his life, it’s football. The father of three says he’s been passionate about the sport for as long as he can remember. Now, that passion is a potential source of income.

At dawn, football fans flock to betting shops across Kisangani, the capital of DRC’s Tshopo province, hoping to leave with cash in hand. Ndongala is among the first to arrive at his neighborhood betting shop.

“I’ve no job, and football betting has automatically become my everyday occupation,” he says. “I wake up early in the morning and leave for betting, to return home in the afternoon.”

“Pari-foot,” local slang for football betting, is a widespread practice, and it’s the only means of survival for some of the city’s residents. But others call it a curse, as they lose money to rival gamblers. As the number of sports bettors grows in this part of the country, civil organizations and authorities are discussing ways to better regulate betting parlors and help football fans gamble responsibly.

In 2012, regulated betting accounted for $58 billion of the total $430 billion global gross gambling yield, according to the European Gaming and Betting Association. Unregulated betting is on the rise. Apart from horse-racing bets, experts say football bets make up 70 to 85 percent of unregulated bets around the world.

The betting market in Nigeria, Kenya and South Africa is projected to be worth nearly $37 billion this year, according to PricewaterhouseCoopers, a financial firm. The industry is growing in other African countries too, with significant foreign investments. But in DRC, the gross gambling yield has historically been low: In 2006, it accounted for less than 1 percent of the country’s gross domestic product. 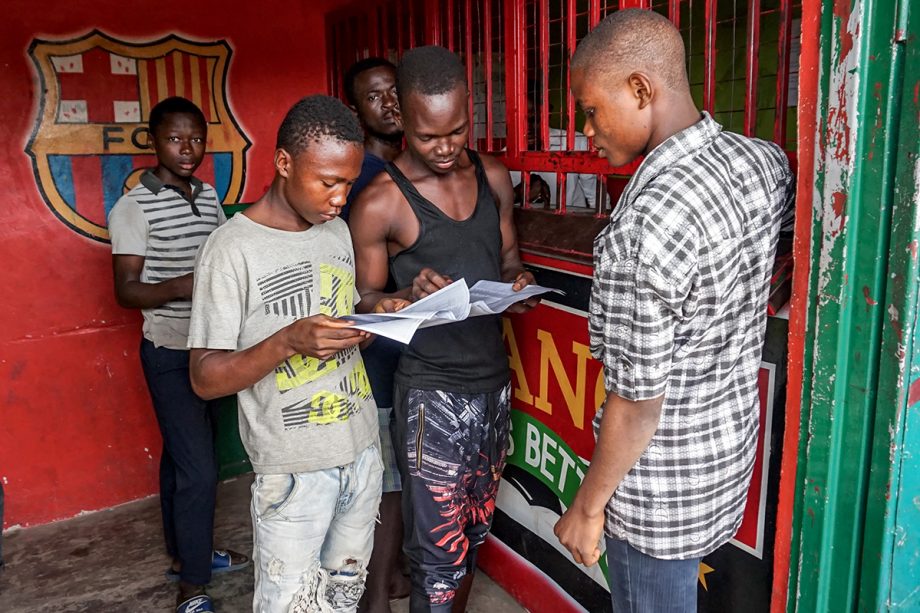 Bettors check football match itineraries after placing wagers on their favorite teams at a betting shop.

DRC is home to zealous football fans, who support both local and international teams. The national men’s team, the Leopards (les Léopards), are 38th in FIFA’s world ranking of men’s teams, and some of the sport’s well-known players come from DRC.

An estimated 56 percent of DRC’s urban population is underemployed, while 43 percent of the active, working-age population is unemployed, according to a 2015 International Monetary Fund report. In Kisangani, formal employment opportunities are few. Many turn to odd jobs to survive, and some wager as often as possible.

To gamble on games of chance, one must be 18 or older, but underage sports betting is common here, and offenders – bettors and betting-shop owners – are rarely punished, says Matheus Kanga, head of the youth division of the Civil Society of Tshopo (Société Civile de la Tshopo), a provincial civil organization.

“Minors are falling prey to gambling addiction and can’t spare enough time to concentrate on their studies,” he says.

With 44 licensed betting parlors across the city, football fans can bet a minimum of 500 Congolese francs (32 cents) on their favorite teams. Betting-parlor owners, or bookies, get up to 115 bettors a day, says Pierre Kitoko Lombo, a city tax collector, making their businesses some of the most profitable in the city.

The financial gains have led to poor gambling regulation, Kanga says. Shop owners allow those below the minimum age to bet, he explains. The local economy also benefits from the widespread practice because the businesses pay a monthly tax of 118,000 francs ($75), Lombo says.

I’ve no job and football betting has automatically become my everyday occupation. I wake up early in the morning and leave for betting, to return home in the afternoon.Jérémie Ndongala

“When my elder brothers left home for betting shops, I would follow them all the way to the shops and see how they could bet on football,” he recounts. “And one day I asked my mom for 500 francs (32 cents) because I, too, was interested in betting on football.”

Aron Basileki, a student at Kisangani University (l’Université de Kisangani), is another bettor. The 22-year-old has never won a bet, but he says he spends most of his free time at his neighborhood betting parlor.

“When I’ve no class and I’m stuck at home, having nothing to do, heading for and spending my time at the betting shop is all I’ve got to do,” he says.

Ndongala, like many others, relies on relatives to maintain his daily habit. He often uses the money his wife earns making sales at the market.

“Football betting is a great opportunity for me, because it’s an easy way to stand a chance of going from rags to riches one day,” he says. “I can’t turn my back on betting, because I can never stop believing in the hope that one day I will definitely win.”

For Blandine Ekongo, a mother of seven, her husband’s regular betting habit has affected their finances.

“Today, my husband neither pays for our kids’ education nor provides for the family,” she says.

Some bettors have developed compulsive habits at the expense of others, but tougher laws from the provincial government can end the practice, Kanga says.

Limiting betting to a few football seasons, instead of allowing it to be a year-round activity, is one of the ways that officials hope to curb serial betting, says Bernadette Furaha Amelima, the provincial minister of public health, gender, social affairs, family and children.

Regardless of their contribution to the local economy, betting-shop owners must abide by the law, she adds.

But Ekongo says that bettors like her husband can’t be stopped.

“He always said he needed more time to make more money gambling, but the odds have never been in his favor,” she says.