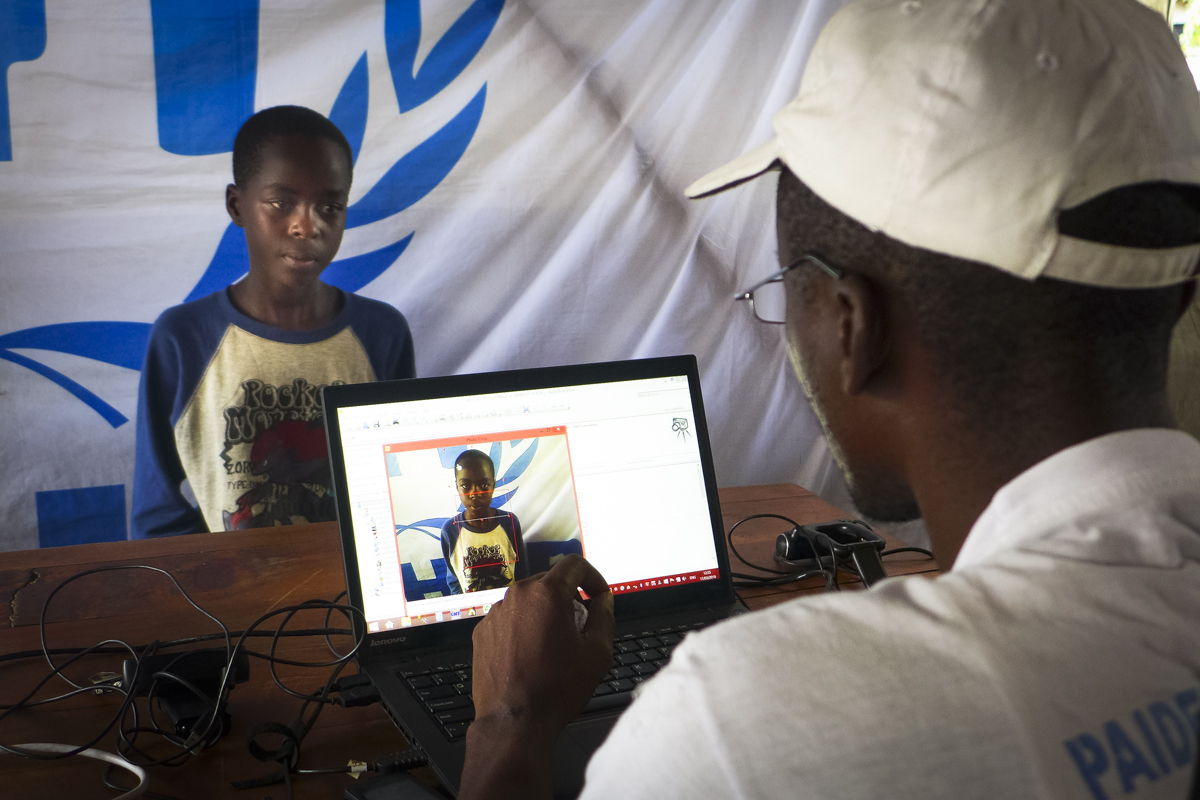 GOMA, DEMOCRATIC REPUBLIC OF CONGO — In a low-income neighborhood of Goma, Merchiade Mugisha, 32, stands in the doorway of the small wooden house he shares with three friends. He watches people pass by.

Mugisha, a Burundian refugee, once lived in the Mutanga neighborhood of Bujumbura, Burundi’s capital city, with his wife and son. From a political perspective, life was peaceful.

But in the spring of 2015, when President Pierre Nkurunziza confirmed he would run for a controversial third term, things began to change, he says.

Friends who were known to oppose the president were arrested for unknown reasons. People disappeared. Street protests escalated.

“Every young man who was known to not support President Nkurunziza was in danger,” he says. “I could not go to work for fear of being killed.”

So Mugisha decided to leave his country and his family. 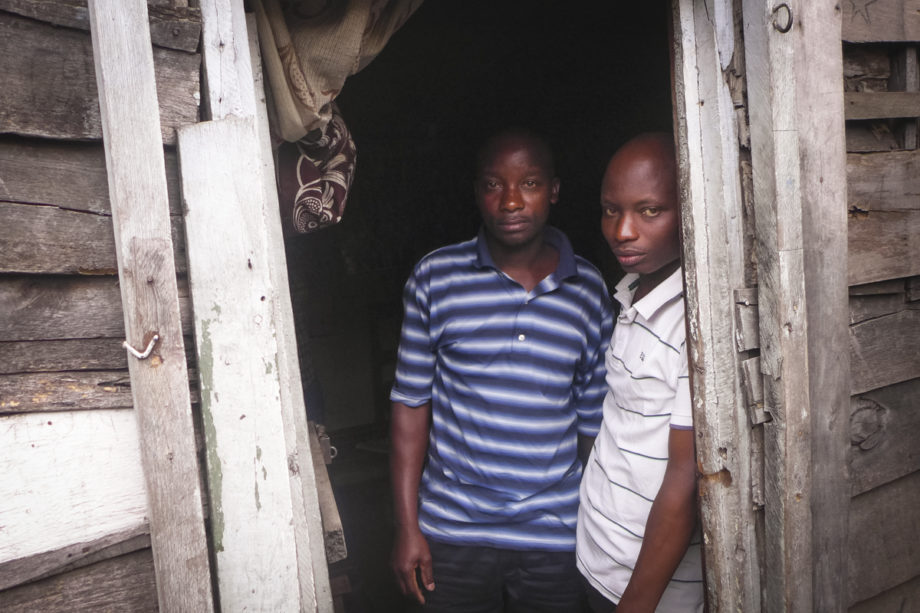 Burundian refugees Merchiade Mugisha (left) and Aloys Habyarimana (right) stand in front of their home in Birere slum in Goma, the capital of DRC’s North Kivu province. They work nearby at a building site.

“I was always hiding for fear of being shot or arrested, as it happened to many of my friends,” he says. “I decided to leave my family at my parent’s home, because I was not sure of what will happen to me on my trip to DRC.”

An estimated 260,000 Burundians have fled their native country since 2015, according to UNHCR data. They’ve sought refuge mostly in Tanzania and Rwanda, a January 2016 report from Human Rights Watch notes.

Approximately 8.5 percent of refugees from Burundi came to DRC, the UNHCR reports. But conditions in DRC’s main refugee camp, as well as a need to earn money to support family members back home, have prompted many to eke out a living in cities.

So far, insecurity has prevented many of those refugees from returning home. In April 2015, Burundians began protesting the president’s bid for a third term in office ─ a bid that defies a two-term limit outlined in Burundi’s constitution.

An unsuccessful move to overthrow Nkurunziza’s government in May 2015 by a group of national army soldiers escalated the violence.

The ideal solution would be to cater to the priority needs of all refugees irrespective of whether or not they live in camps. Samy Mukombozi, an activist with Union Chrétienne pour le Progrès et la Défense des Droits de l'Homme, in English known as the Christian Union for Progress and the Human Rights Advocacy

The number of refugees entering DRC has increased in recent months. According to data from the World Food Programme (WFP), which offers food vouchers to Burundians entering the Lusenda refugee camp in Fizi territory in South Kivu province, the number of vouchers used rose from 9,500 in October 2015 to more than 14,000 in March.

As of March 2016, 22,204 refugees from Burundi had entered DRC, according to UNHCR data updated on March 27. The Lusenda camp is hosting about 16,000 of the refugees. The rest, like Mugisha, have dispersed throughout the country in search of work.

Nkurunziza is one of several African leaders challenging local laws to extend terms in office. DRC President Joseph Kabila’s term is set to end in December 2016, but the election process has been stalled. In Rwanda, President Paul Kagame’s second term in office was set to end in 2017, but a constitutional change was made to allow him to continue as president beyond then. That change would keep him in office until 2034. And in Uganda, President Yoweri Museveni, who has been in power since 1986, was declared the winner of the election in February, though many people there dispute the results. 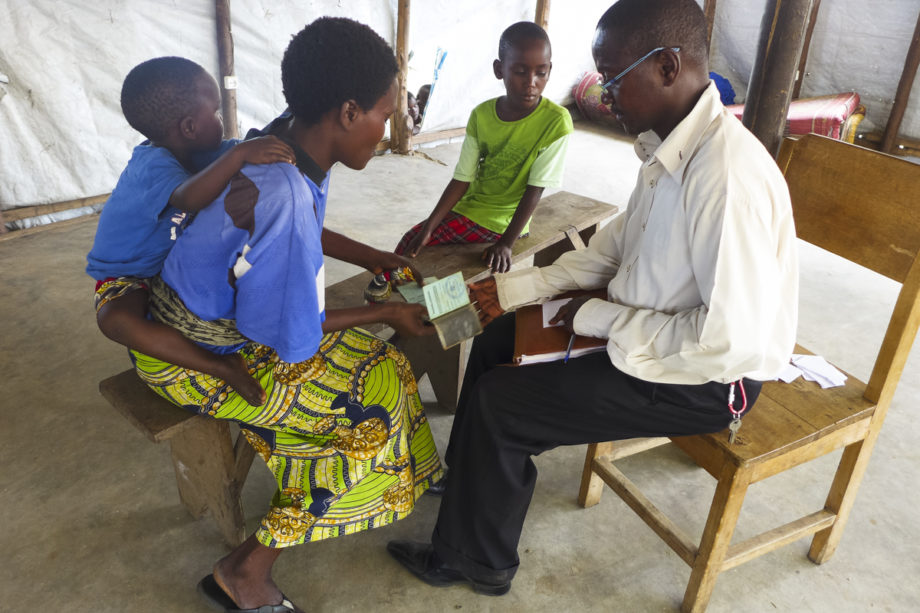 A Burundian woman, with one child on her back and another watching, works with a UNHCR officer to register as a refugee.

For Mugisha, the unrest in Burundi sent him on a dangerous trek northwestward. With his wife and 5-year-old son left at his parents’ home, he fled across the border through Cibitoke, a city in northwestern Burundi near the DRC border. Then, he crossed into the Ruzizi Plain in DRC’s territory of Uvira.

There, he registered as a refugee at the Kavinvira Transit Center and transferred to the Lusenda camp.

But life was difficult in the camp.

“One day, we saw food supplies arriving into the camp, but no food was distributed to refugees,” he says. “In response, some refugees held protests inside the camp and destroyed the camp’s infrastructure, leaving some of them injured.”

Every young man who was known to not support President Nkurunziza was in danger. I could not go to work for fear of being killed. Merchiade Mugisha, 32, a refugee from Burundi who now lives in DRC

Samy Mukombozi, an activist with Union Chrétienne pour le Progrès et la Défense des Droits de l’Homme, in English known as the Christian Union for Progress and the Human Rights Advocacy, which has a presence in the camp, says he witnessed violence related to food shortages. In February 2016, Mukombozi says, the organization registered five cases of violence related to access to food.

At Lusenda, Mugisha befriended three young men who arrived there under similar circumstances.

“Together we decided to leave the camp with hopes of finding a job, as we had families back in Burundi whom we should help even from far,” he says.

Mugisha says they searched for work in Bukavu, a city south of Lake Kivu, but the high cost of living and few opportunities forced them to travel north to Goma.

“One day, we decided to collect the little money we had, and took a boat to Goma,” he says. “I remember how it was a very cold night.”

The men bought $5 tickets that got them outside seats for the eight-hour journey.

Once in Goma, they made their way to the Birere slum, where there heard they could find a meal for 500 Congolese francs (54 cents).

“When we were in the restaurant, the owner realized that we were not from the region, maybe because of our way of speaking Swahili,” he recalls. 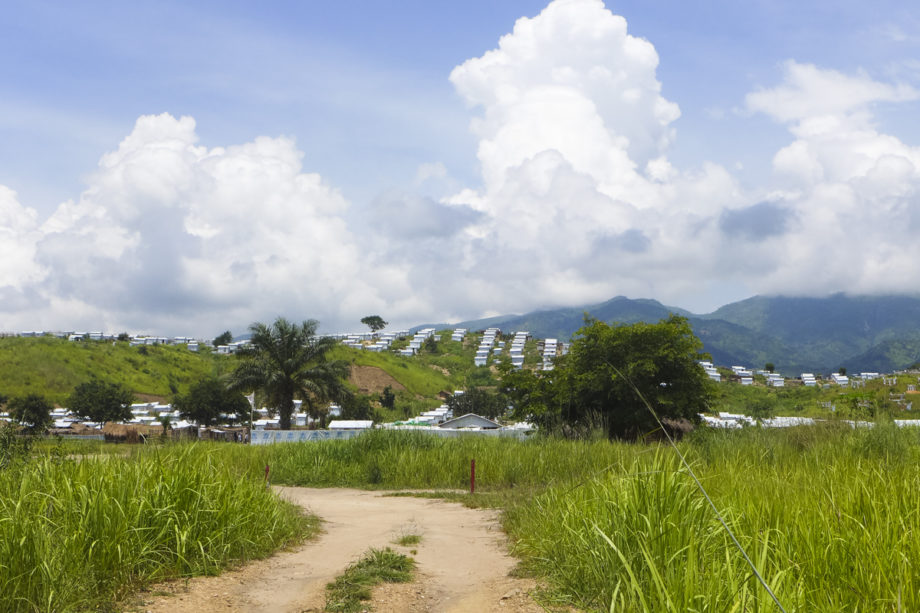 When the restaurant owner heard their story, she offered them a room in her home while they searched for work and saved enough money for rent.

Mukombozi, the human rights activist, says the humanitarian situation for Burundian refugees is alarming. Conditions in the camp have forced many to the urban communities, he says. Here, they are left to fend for themselves because food and medical assistance only applies to those in the camps.

“The ideal solution would be to cater to the priority needs of all refugees irrespective of whether or not they live in camps,” he says.

Mugisha and other Burundian refugees can receive asylum seeker certificates when they enter DRC. The country’s refugee commission issues the certificates to demonstrate legal status for the refugees. The certificates are renewable every three months.

Those certificates bring peace of mind to some refugees.

“I found myself living in Goma today because I was chased out of my own country. I did not know which way to turn. I had no choice but to scurry into my hiding place for several days. I had no one to confide in for fear of being caught. In Goma, I can walk without fear,” says Emmanuel Ndayizeye, a Burundian refugee.

Even so, the refugees who find themselves in Goma struggle to create lives for themselves. Some residents of Birere, the Goma slum where Mugisha wound up, say they stand in solidarity with the refugees, as DRC is also home to frequent bouts of conflict.

“We see them arrive from Lusenda asking for help,” says Chantal Masika, a Birere resident who has allowed several refugees to stay in a small annex shelter at her home.

Mugisha says they have survived thanks to the kindness of locals. But they struggle to make rent payments.

“We have moved from one house to another. Landlords end up chasing us for missed rent payments,” says Aloys Habyarimana, another resident.

The situation is challenging for local landlords.

“They come and beg us to give them a room to rent and promise to pay on time. When they fail to live up to the promise, we have no choice but to chase them. I cannot rent out my house to someone who does not pay,” says one landlord known as Papa Chance, who asked that his real name not be revealed.

Back in Burundi, Mugisha was a technician. He repaired broken televisions, refrigerators and radios. But in DRC, he makes a living as a bricklayer’s assistant at construction sites in Goma. He says he’s managing to live on his meager salary, about $3 per day, until he can get a better job.

All of his roommates are struggling to make ends meet, he says.

In the last few months, they have lived in several houses, often evicted when they can’t pay on time. Mugisha also struggles to buy food because he saves some of his wages to send home to his wife and son.

The four men are waiting for things to improve in their country, where violence and political tensions remain high. In the meantime, Mugisha says they pass their evenings discussing politics and reminiscing about their families.

The number of Burundian refugees streaming into DRC will continue to rise, says Freddy Salumu, the social operations officer at the National Commission for Refugees. The Kavinvira transit camp in Uvira registers hundreds of families per week, he says.

“Today, we are registering another 242 families who have just arrived, and we’re going to proceed directly with their biometric registration before taking them to Lusenda camp for those who so wish,” he says of the fingerprinting process required for asylum seeker’s certificates.

Salumu says refugees are free to leave the camps if they want to try their luck in the cities or with host families.

“We let them go, because they are free to make that decision,” he says. “But we ask them to leave their ration card because the World Food Programme only feeds those living inside the camp.”

For most refugees, the more pressing question is if or when they will return home. While some say they hope to return to Burundi as soon as possible, others say they will stay.

Annick Irakoze, 36, a refugee, says she believes she and her three young children will stay in DRC for the rest of their lives, despite the fact that her husband and 15-year-old son remained behind in Bujumbura.

Mugisha says that even though he and his friends feel safer in Goma, his dream is to return to his family and a more stable country soon. 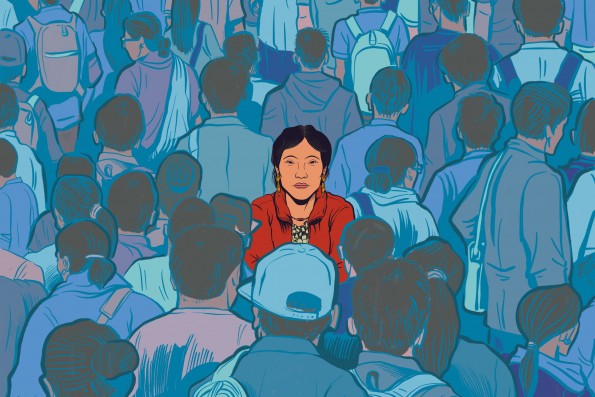 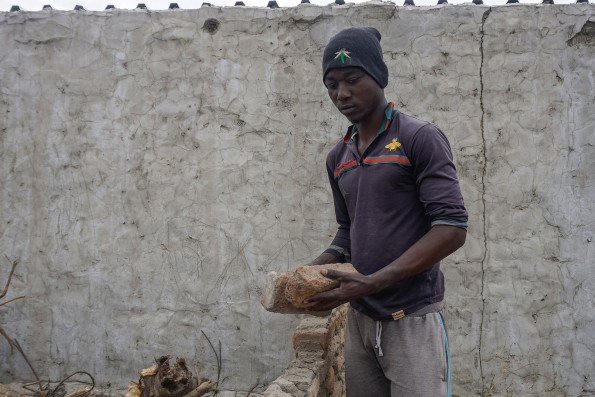 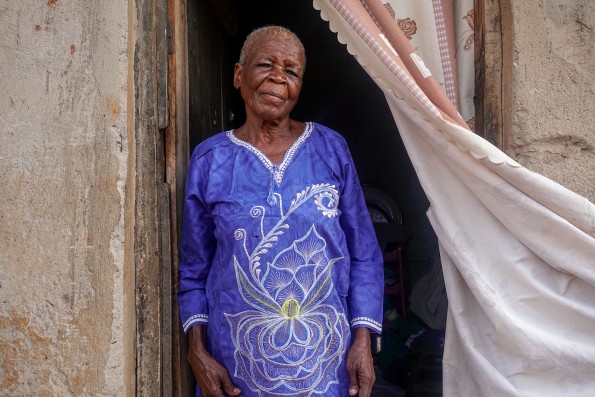 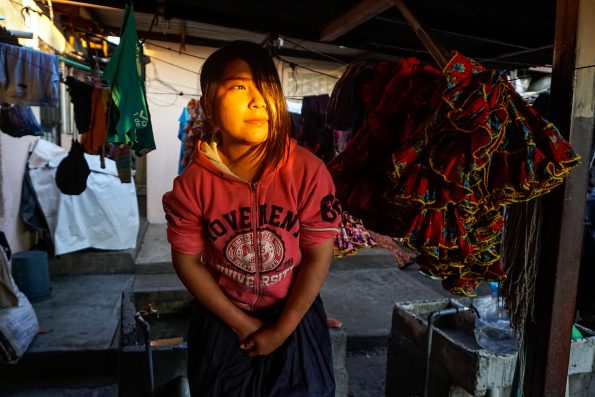