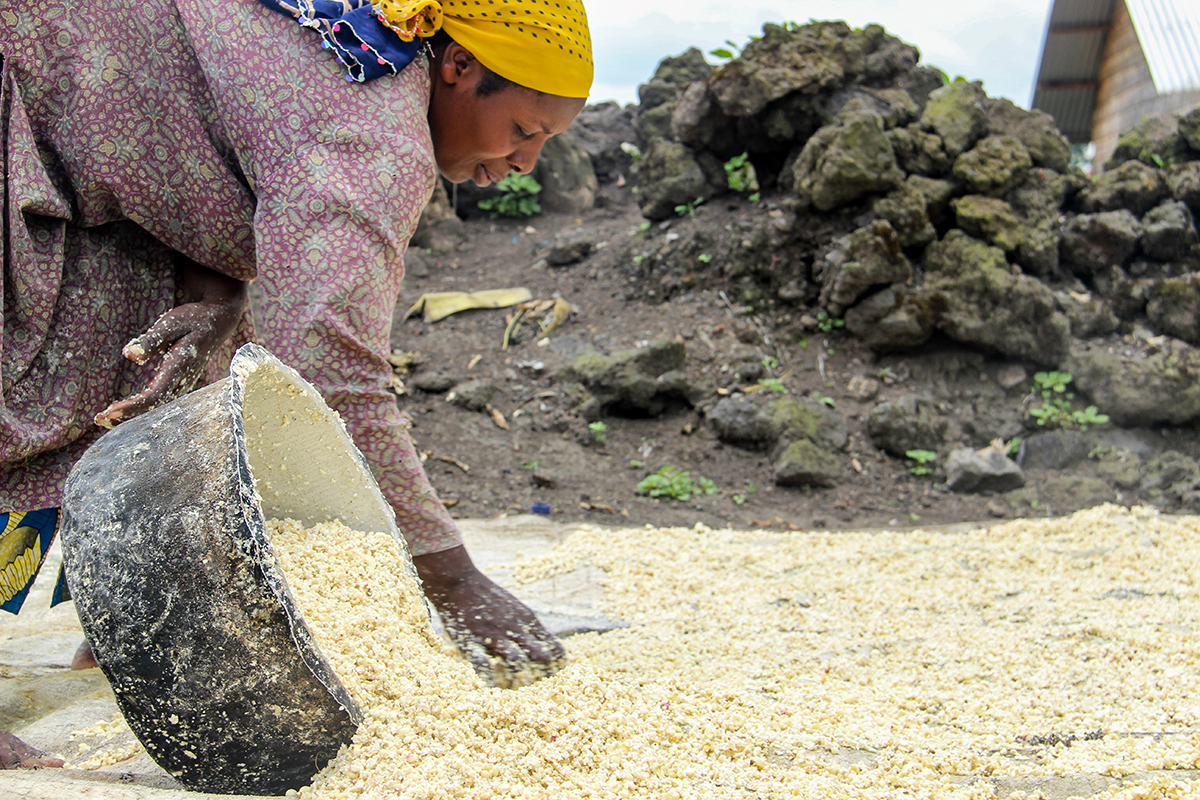 KITCHANGA, DEMOCRATIC REPUBLIC OF CONGO — In Kitchanga, a rural town in eastern DRC’s North Kivu province, when a green or blue-and-white-striped plastic bag is seen flying on a stick, it’s a sign that there’s something special for sale. Mandale, one of the most sought-after local brews, that is.

Mandale, also known as “the stomach remedy,” is a famous style of beer brewed primarily by women. For the women of Kitchanga, it’s a bold entrepreneurial move to build a small artisanal brewing facility in the town, but the beer is popular, and the business enables them to provide for their families single-handedly.

Furaha Tity, a mother of five and the wife of a farmer, is one such mandale entrepreneur. Tity began to brew the locally cherished craft beer in 2011 while in Mweso, a village approximately 20 kilometers (12 miles) north, before relocating to Kitchanga. 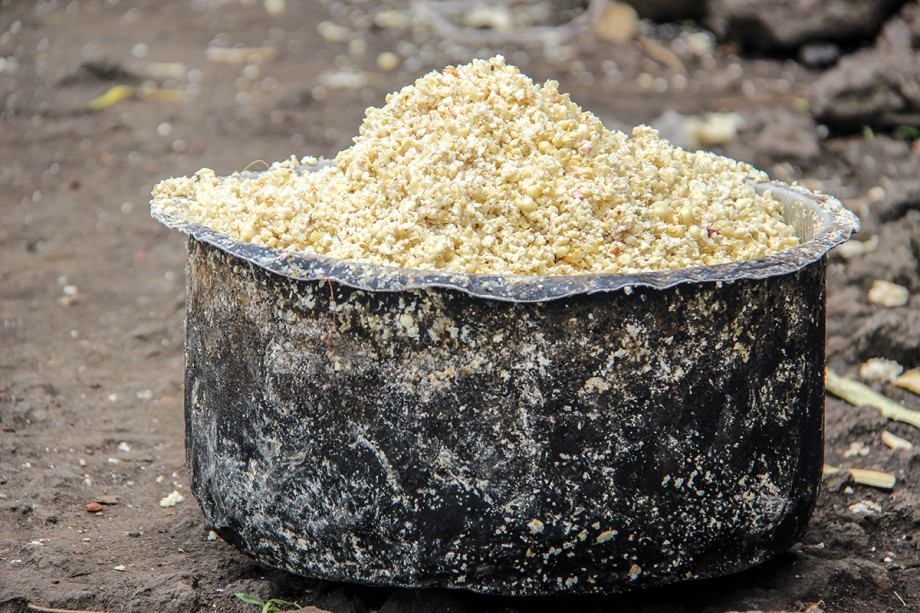 Furaha Tity will fill this pot of corn, one of the main ingredients in mandale, multiple times, as she uses it to transport the corn to a tarp where it will dry in the sun for at least three days.

Today, Tity rents a small house where customers meet to relish the distinct flavors of her unique product. In addition to friends and neighbors who sometimes pass by to say hello and taste her brew, nearly 20 people visit the house per day.

Tity, 31, believes that a good drink is another wellspring from which people draw wisdom.

“I call upon my fellow villagers to always consume our local drink, which is the women’s own making. This way they can not only promote us, as women, but also value women’s work,” she says.

Mwisha Mixona, one of Tity’s customers, believes that the mandale has no equal among many local beer brands. The mandale is rich in several vitamins and proteins, he says.

While mandale is loved thanks to its low prices, it’s inspired many women across Kitchanga and elsewhere to turn their passion for making it into successful businesses.

Most consumers, however, are men, since women rarely enjoy this style of beer.

Many say mandale is an “all-in-one drink,” as it fuels the feeling of satiety and keeps you from needing to eat another meal. The majority of mandale lovers are those who engage in physically demanding activities that often require explosive bursts of energy or unfailing strength throughout the day. These drinkers include porters and people who toil on stone-crushing sites. 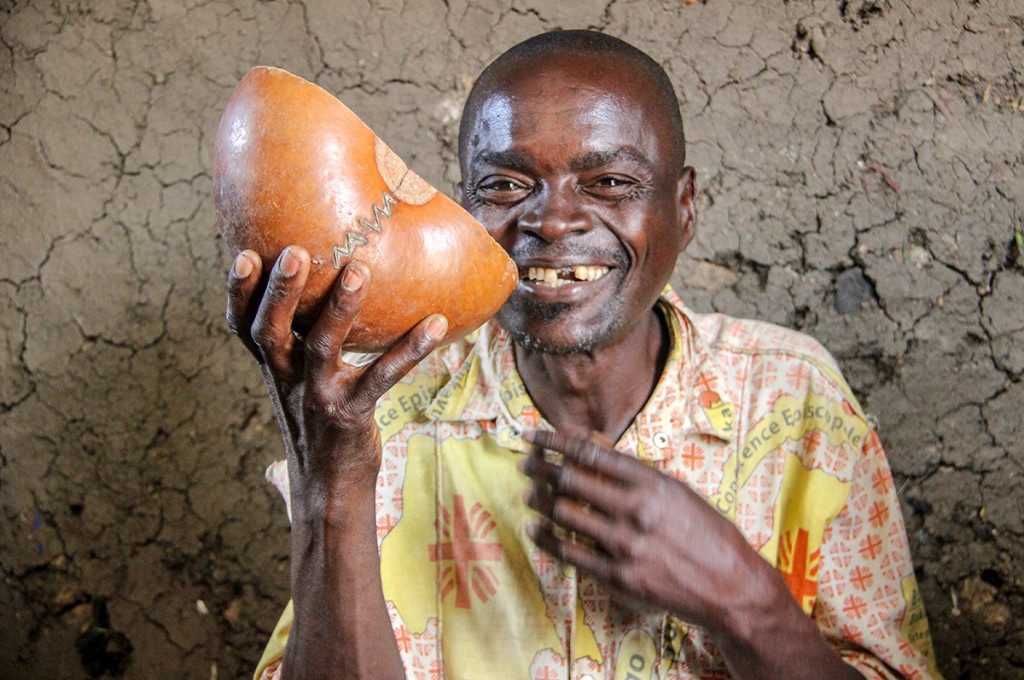 Romain, 42, is a customer at Furaha Tity’s brewery. He stops by for a mandale, served in a wooden container, on a regular basis. 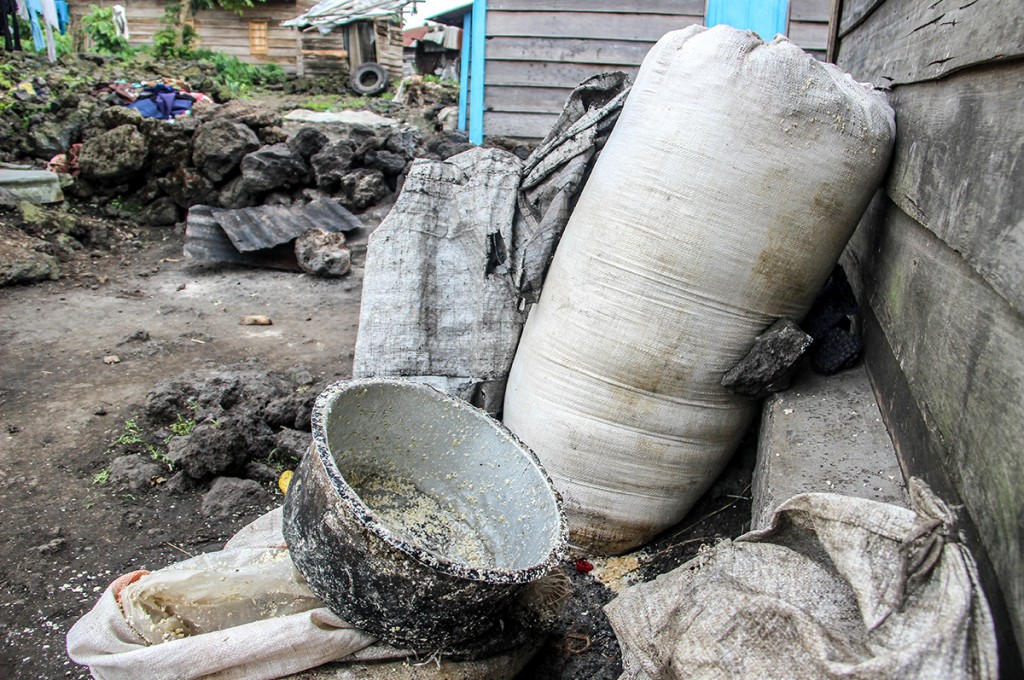 Tity’s craft brew contains a variety of grains: corn, sorghum and millet. Before the grains are mixed together, the corn kernels must be placed in the soil to ferment for one week. 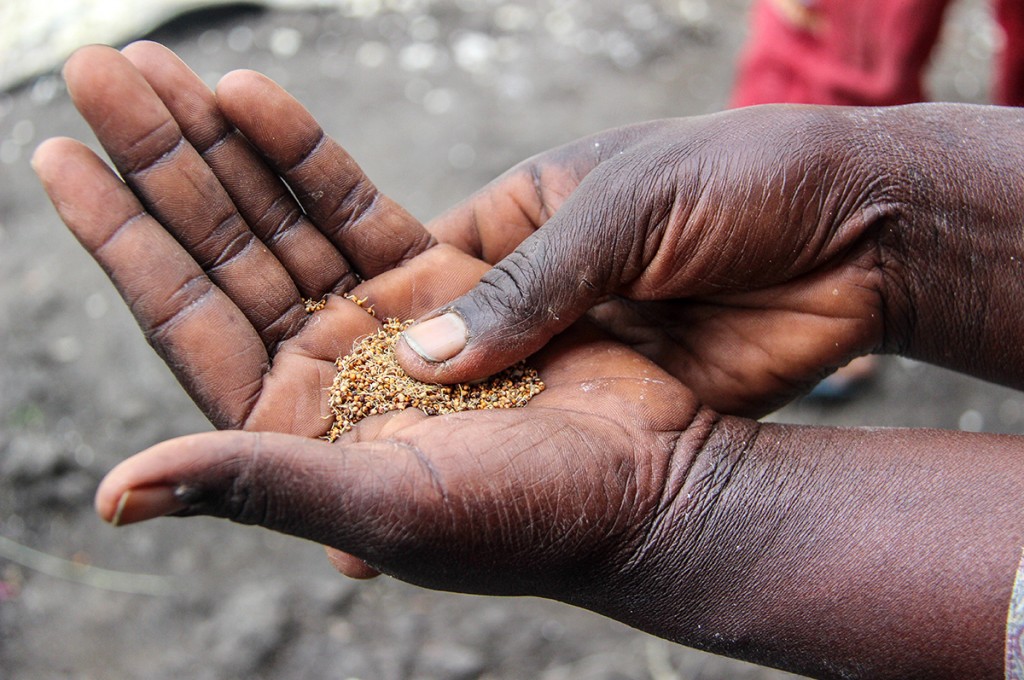 Tity holds a handful of millet at her home and brewery in Kitchanga, DRC. 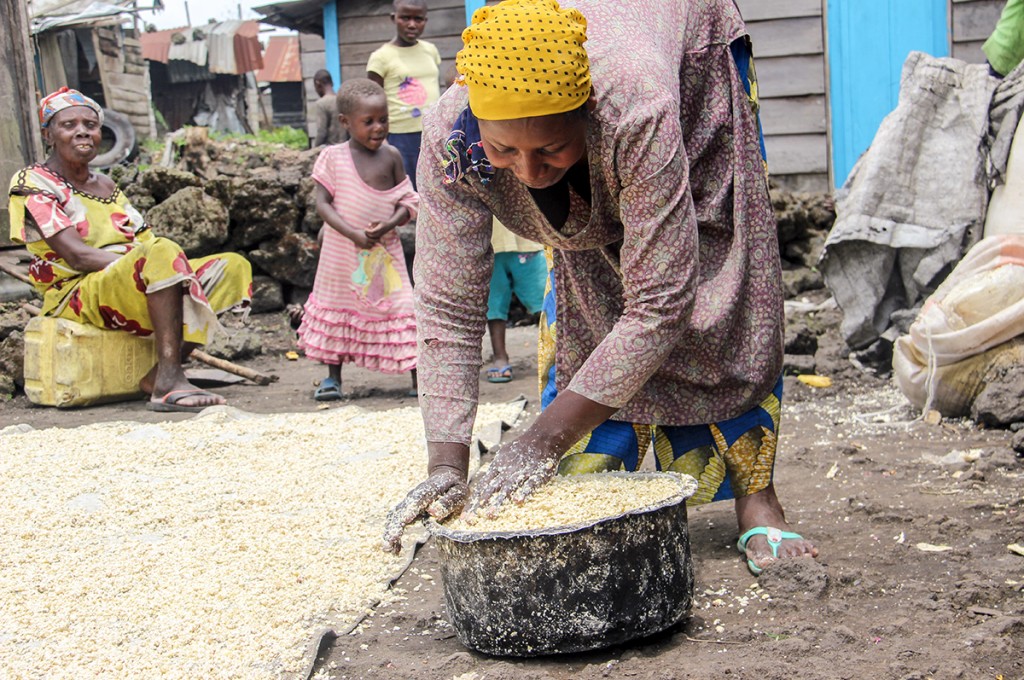 After the corn has fermented, Tity begins the task of gathering the kernels and spreading them out on a large tarp. 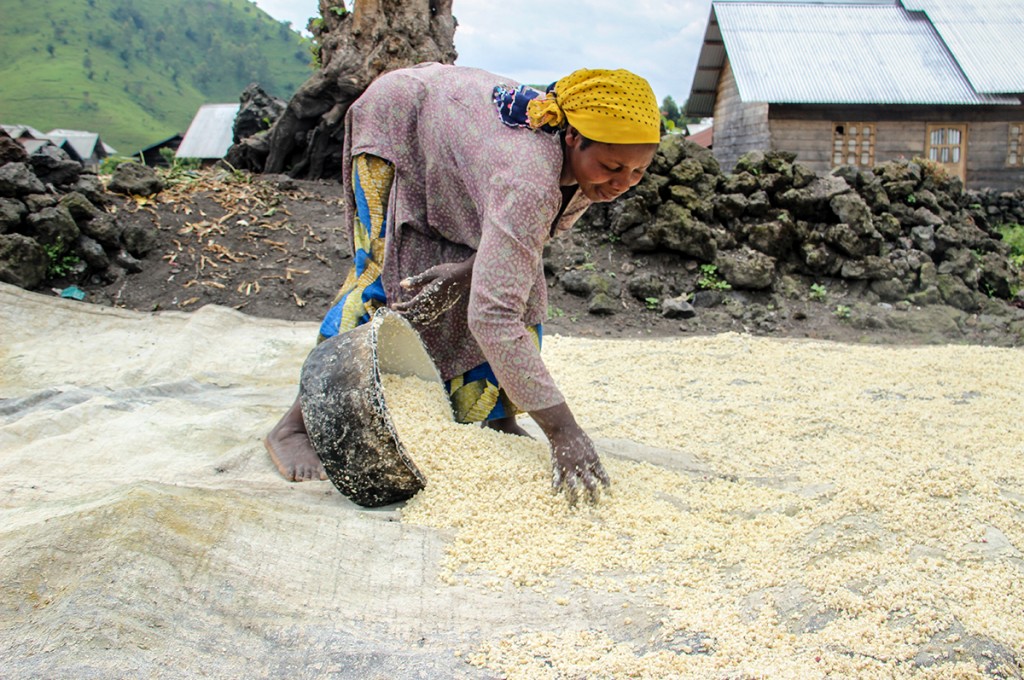 It takes at least three days, depending on how sunny it is, for the corn kernels to dry. 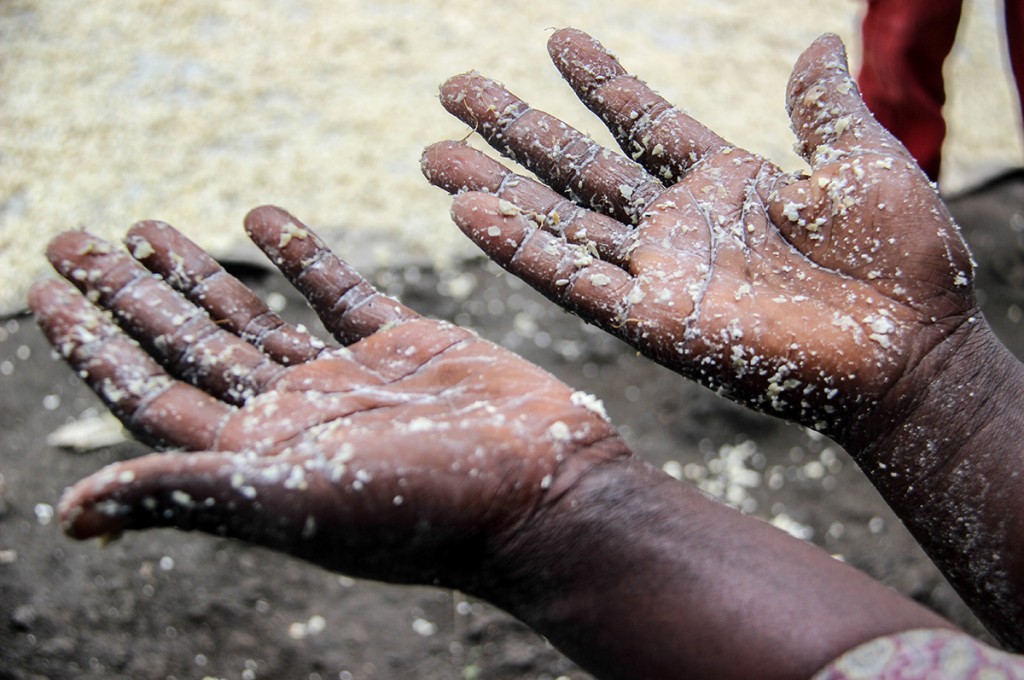 When all the fermented corn is soaking up the sun, Tity’s hands are a testament to her hard labor. 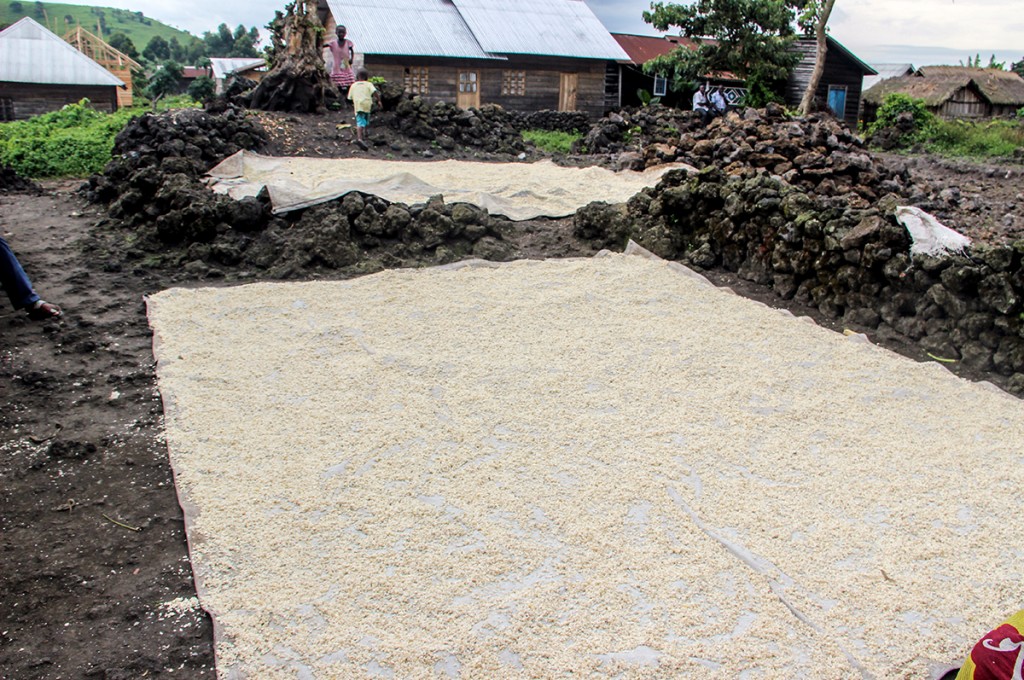 Multiple tarps, covered in fermented corn kernels, are a common sight at Tity’s house. After the corn kernels have dried, they are brought to a local flour mill, where they will be ground into a fine flour. 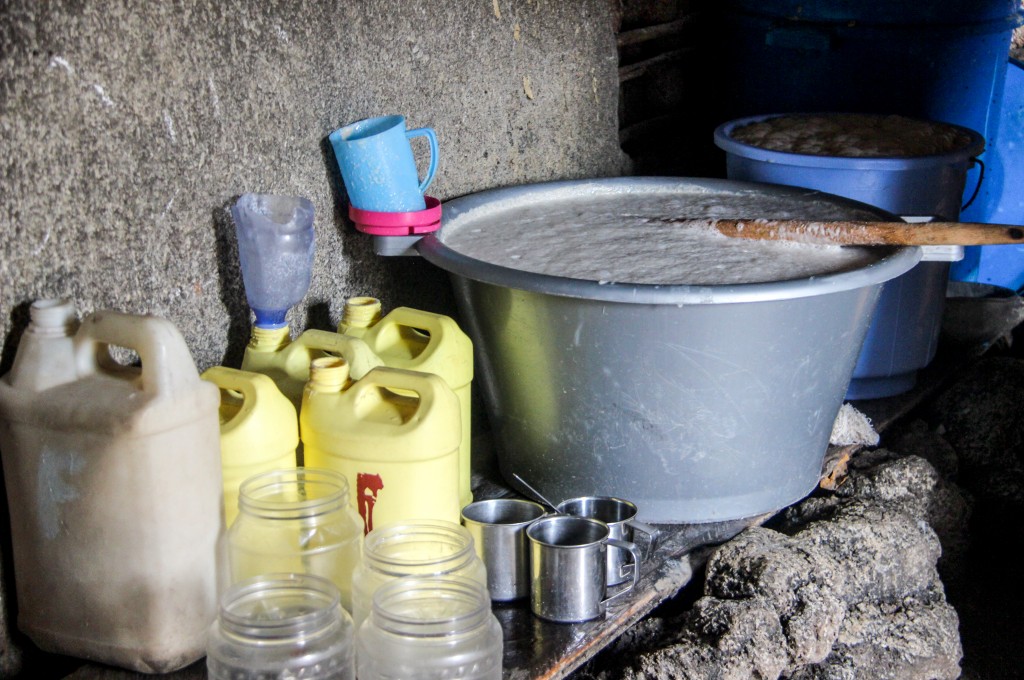 Once the corn is back at Tity’s home, the flour is mixed with water and kneaded into a dough. The mixture ferments again, for one day. Then the sorghum and millet are added for flavor. 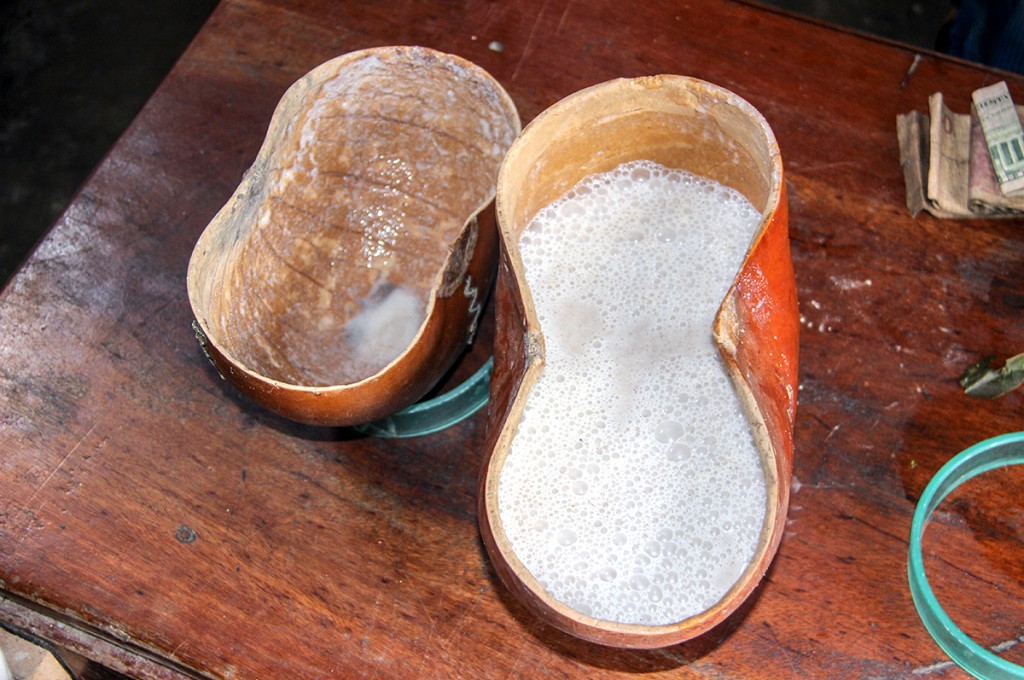 The final drink, a truly home-brewed craft beer, is ready to serve!

During a recent visit to her house, Tity volunteered to share her secret recipe with Global Press readers.

What you need
2 empty bags, for storing the corn
A pestle and mortar
Access to a flour mill or a food processor
A sunny space where your corn kernels can dry for three days

Furaha Tity’s Mandale Recipe
1. The corn kernels must be broken into smaller pieces. If you are making a large batch, take them to a flour mill and have them broken up into two or three pieces each. For a smaller batch, blitz them in a food processor.

2. Put the corn kernels in a plastic bag, and then place them in soil to ferment for one week. They should swell up to two or three times their original size.

3. Next, the corn kernels are placed in the sun on tarps in the courtyard until they are dried out. This typically takes three days, depending on how sunny it is. If you are drying your kernels inside, find a sunny spot where the kernels won’t be disturbed.

4. Once the corn kernels are dry, bring them back to a flour mill to get ground into flour. Or, if you are in the mood for some extra work, grind up the kernels with a pestle and mortar until a fine powder if produced.

5. Grind the millet and sorghum seeds into a fine powder. You can use a pestle and mortar for this.

6. Mix the corn flour with water, roll up your sleeves and start kneading the mixture until you have achieved a doughy consistency.

7. Cover the dough with plastic, and allow it to ferment for at least one day.

8. Add water to the mixture, until a milky consistency is achieved.

9. Lastly, for extra flavor, add the sorghum and millet, and you have mandale!

Recipe notes: The mandale is a local brew that is served fresh. Once prepared, it should be consumed the same day. Keeping it beyond the day of preparation means that it can no longer be consumed.