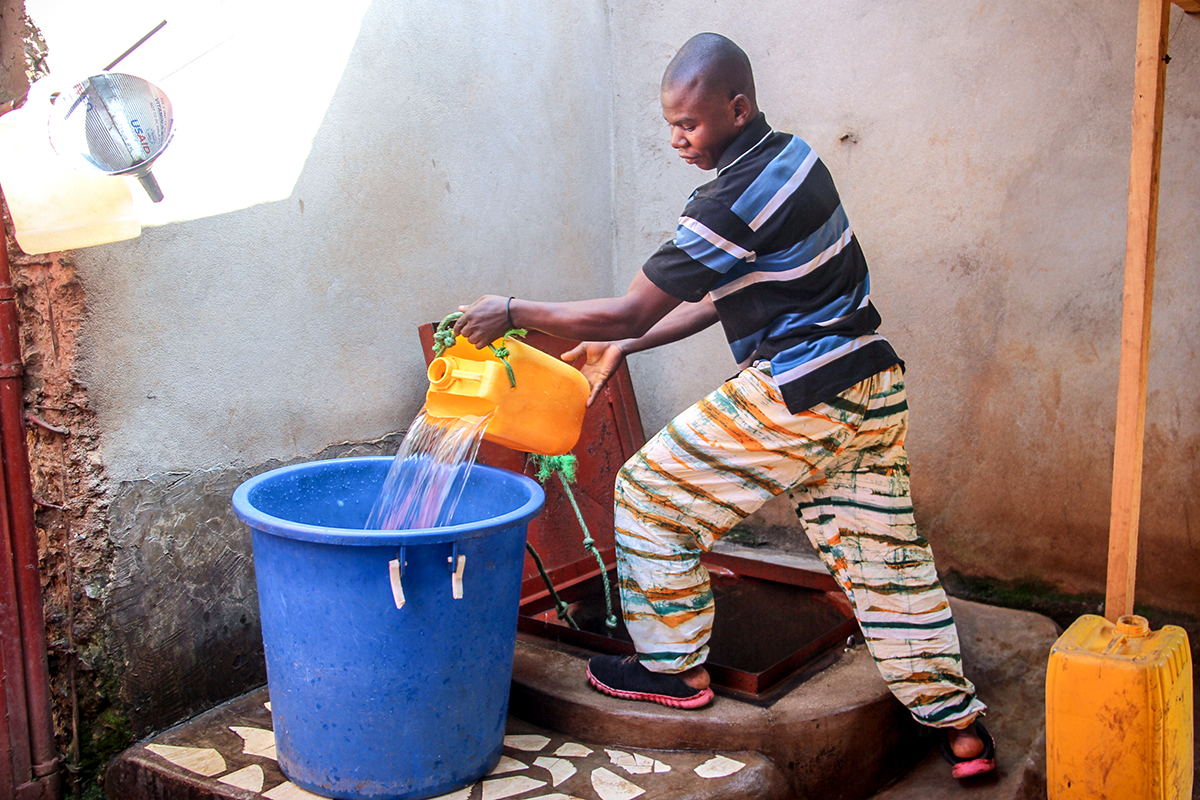 BUKAVU, DEMOCRATIC REPUBLIC OF CONGO — Yellow jerry cans in hand, young women and children queue up for water at the well inside the rubble enclosure. In a nearby alleyway, women who cannot withstand the long queue flock to a less discovered water source.

Many give up a full night of sleep traveling to wells to meet the daily challenge of finding and carrying tap water home. Water continues to be a major concern, with nearly three-quarters of the nation lacking access to drinking water.

Vital Banyanga, a married father of 11, has found a partial solution to the problem for his Cercle Hippique neighborhood here in Bukavu, the capital of the South Kivu province.

About a year ago, Banyanga noticed that the ground was wet when he was digging a pit for his garbage. “As I continued digging, I miraculously saw water gushing out from the underground,” he says. 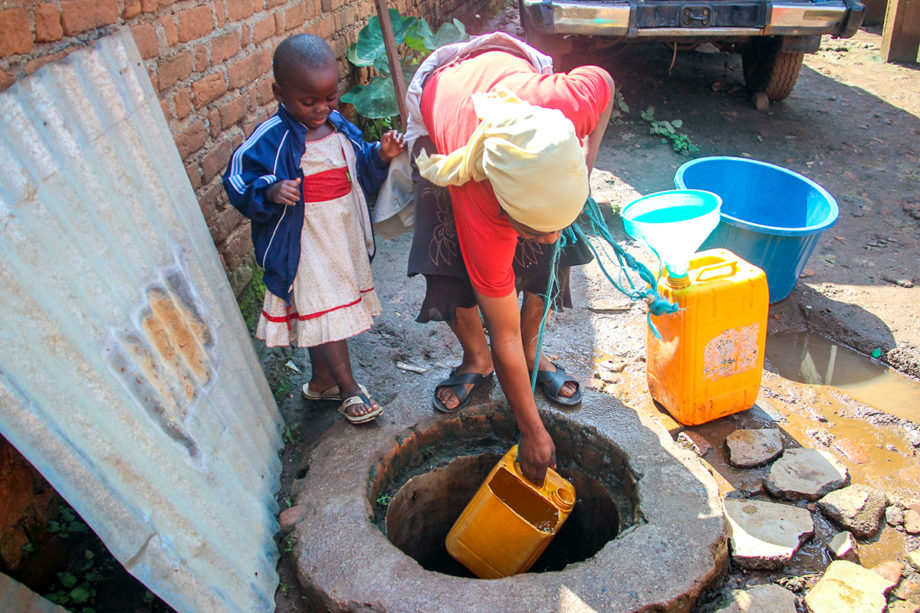 A woman and her daughter fetch water from a well in Democratic Republic of Congo, using a plastic canister on a rope.

Despite these precautions, Dieu-Merci Kanganda, a medical practitioner at the General Hospital of Bukavu, warns that water from wells like Banyanga’s can give rise to typhoid, diarrhea, dysentery, cholera and a host of other waterborne diseases.

He recommends that residents heat well water to 100 degrees or use sanitizing tablets from the pharmacy to ward off any risk of disease.

The country’s ongoing insecurity, most pronounced in eastern DRC, is the biggest factor in lack of access to clean water, according to a report by the United Nations Environment Programme.

“The river Murhundu that flows through the water catchment basin is increasingly drying up,” he says.

Fewer than 50 percent of Bukavu’s 1 million residents have access to clean drinking water, and countrywide the number is higher, with a 2016 UN Environment Programme report estimating that nearly three-quarters of the nation’s 79 million people lack access to safe drinking water.

Residents of Ibanda, a Bukavu commune in the Panzi neighborhood who have lacked drinking water for nearly 13 years, recently protested outside city offices.

Following a meeting convened by the mayor of Bukavu in response to the protests, Kabiona pledged to address the issue raised by the protesters, while making it clear that the problem is caused by the lack of means, obsolescence of the distribution network and high-density population in Bukavu.

A recent study by the International Committee of the Red Cross (ICRC) on the Bukavu city water system suggests several options: First, it is a question of supplying Burhalaga a tank with water and carrying out the catchment of the water source of Mazigiro on the river Nyambasha to supply Kadutu commune and Ibanda commune’s neighborhood of Panzi with drinking water.

The second option proposed by the study consists of pumping water from Ruzizi River to Elakat to supply Muhungu buffer tank with water. The study also proposes a catchment at Mpungwe River catchment, which alone could supply water to 70,000 residents of Bukavu.

Until then, Banyanga’s well is popular with the neighbors.

“We had suffered a lot,” says Maria Mushagalusa. “We could spend nights outdoors in search of water, and in most cases we would return home empty-handed.”

Today, she says, “we can sleep peacefully in our beds at night, being pretty sure that we can get water, even if only a small quantity can be available.”