Skip to main content
The story you are reading was published on Thursday January 8, 2015. To read more recent stories click here. 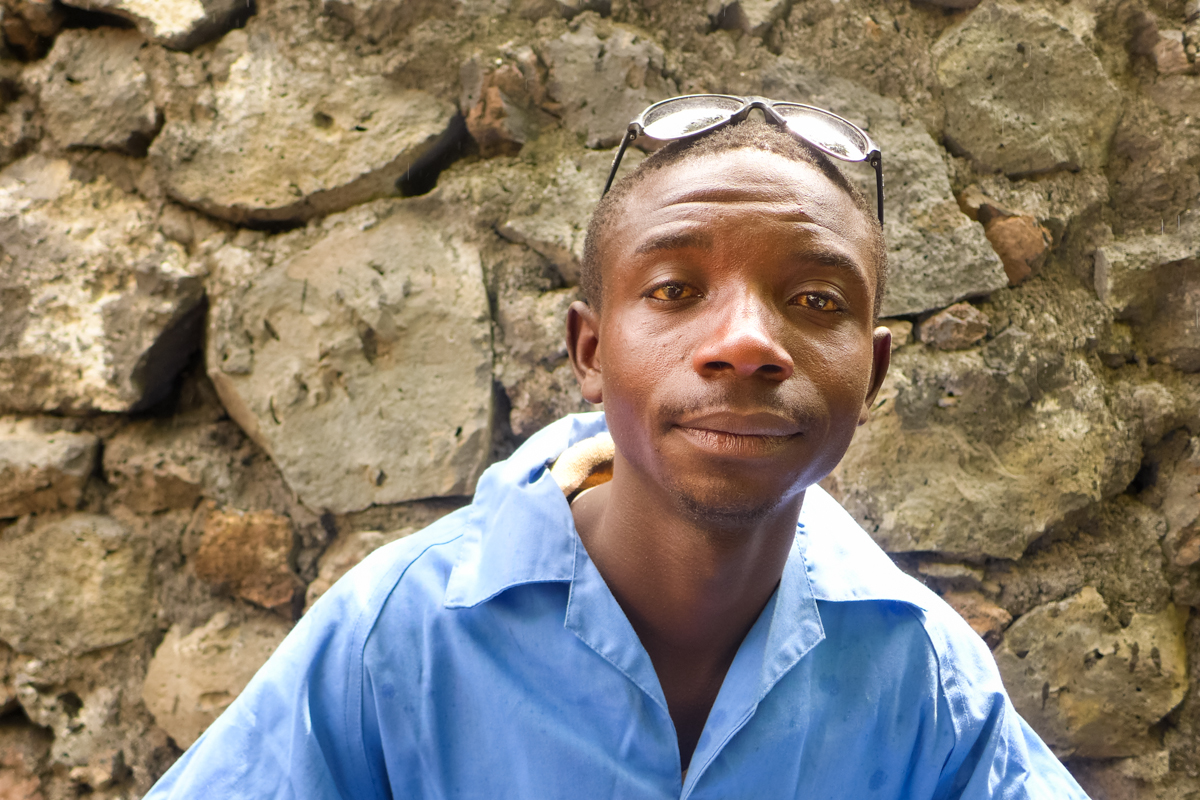 MASISI, DEMOCRATIC REPUBLIC OF THE CONGO – Bahindu Tumusifu vividly recalls a night in 2008 that was filled with screams, destruction and massacre in his village, Masisi.

Quiet enough for Tumusifu, then 13, and four of his friends to leave their hiding place in search of others who survived the attack by armed, non-government forces. As they emerged, they came upon a group of those fighters carrying off hens, goats and packages of food from Masisi, a village in the North Kivu province of the Democratic Republic of the Congo, or DRC.

The soldiers were part of the Mai Mai Nyatura armed group. At least 20 Mai Mai factions are active in the North Kivu and South Kivu regions, according to the United Nations Office for the Coordination of Humanitarian Affairs, or OCHA.

The term Mai Mai refers to any community-based militia group active in the DRC.

The fighters forced the five boys, all of whom were between the ages of 11 and 13, to help carry the stolen supplies, Tumusifu says.

“The soldiers threatened to kill us, as they had killed others, if we refused to carry their packages to their destination,” says Tumusifu, now 19.

Fearful, the boys picked up heavy loads and walked with the fighters, he says.

Collectively lugging as much as 80 kilograms (176 pounds) of food and goods, the boys walked for a full day before they were allowed to rest, Tumusifu says.

In the dark of the second night, the soldiers and their captives pitched camp deep in the forest, Tumusifu says. The fighters ordered the boys to start a fire and then permitted them to cook some of the beans stolen from their village.

After the boys ate, the fighters ordered them to sleep on the wet grass.

“I could not close my eyes that night,” Tumusifu recalls. “I trembled from cold weather and fear at the same time.”

The next morning, the boys awoke hopeful they would be let go, he says. Instead, the fighters took the boys to their base.

“When I learned that we were going to their base, I knew that [they] would never release us,” he says. “I cried too much, hoping that they would release me. But instead, they struck me, threatening to kill me. I continued to sniffle like a baby.”

When they arrived at the base, the boys were welcomed by at least a dozen other kidnapped children, both girls and boys, Tumusifu says.

On their second day at the base, Tumusifu and his friends were issued rifles and ordered to learn to shoot.

“My hands trembled when they gave me the rifle,” he says.

Tumusifu had to repeatedly put the gun down to wipe the sweat from his hands.

After a week of training, Tumusifu knew how to load and shoot his rifle.

After his second week of training, he was ordered to fight on the front lines.

He is haunted by the recollection of the first time he saw people die in combat.

“My God, when I saw how people fell on the floor, I was so afraid,” Tumusifu says.

Worse still was his first kill.

“When I myself first shot a man, I felt terror seize all my body,” he says.

He ran toward the bleeding man. Then, staring at the fresh corpse, he froze.

“A rebel soldier pushed me brutally forward, seeing how I was contemplating the man that I had just killed for my first time,” he says.

The memory of that killing did not fade.

“I spent one week without sleeping,” he says. “The look of that man haunts me always.”

To cope with the violence and the separation from their families, Tumusifu and the other boys began drinking alcohol and smoking hemp with the older soldiers, he says. But the substances could not obliterate Tumusifu’s memories of the atrocious things he did.

“I will never forget how they forced me to rape a woman who was my mother’s age,” he says, close to tears at the memory. “I think that it will haunt me all my life.”

Tumusifu fought with the Nyatura fighters for nearly five years. During that time, he saw most of his friends die.

His ordeal ended in January 2013, when DRC forces attacked the Nyatura base.

The armed group and government soldiers fought all night, he says. By morning, the Nyatura fighters had run out of ammunition.

The government soldiers captured 18 of the defeated fighters, including Tumusifu and other child soldiers, and took them to a jail in Masisi.

At the jail, the village chief recognized Tumusifu and some of the other boys in his brigade. Tumusifu was released a month later.

Upon his release, Tumusifu learned that both of his parents had been killed in one of the many waves of violence that had swept through Masisi over the previous five years. Tumusifu went to live with his maternal uncle.

“Life in the village was not the same for me,” he says. “I felt different from others. I had nothing in common with others my age. And they were afraid of me. I was aggressive all the time.”

Murhula says even he was afraid of his nephew, who would quickly turn violent. Not knowing how to handle the young man, he turned to his church.

“In my church, I had heard about a Christian organization called Jericho Foundation that helped children in such situations,” Murhula says in a telephone interview.

Last May, Murhula sent Tumusifu to the Jericho Foundation, located in Goma, in the hope that the organization could help him “become normal again,” he says.

Tumusifu is not alone. Throughout the country, thousands of former child soldiers struggle to readjust to civilian life after being forced to fight in regional conflicts. Several organizations that assist these young people have emerged in Goma.

The recruitment of child soldiers is a long-standing feature of armed conflict in eastern DRC. And Mai Mai groups are among the most active conscripters of child soldiers, according to a 2010 report by Child Soldiers International, a London-based international human rights research and advocacy organization.

UNICEF and the United Nations Organization Stabilization Mission in the DRC report rescuing more than 10,000 child soldiers in eastern DRC, including more than 7,000 in North Kivu, between 2012 and 2014.

UNICEF defines a child soldier as anyone under 18 who is a member of – or attached to – an armed group. Child soldiers are expected to carry out a wide range of orders, including front-line combat; laying land mines and planting explosives; scouting and spying; acting as decoys, couriers or guards; training and other combat preparations; providing logistical and support functions; and portering, cooking and performing other forms of domestic labor.

The Transit and Orientation Center in Goma has rescued and rehabilitated more than 8,000 children since it was founded in 2005 in partnership with UNICEF, says Willy Chirhuza, a coordinator at the center.

The more than 40 armed groups in the region use children like Tumusifu because they are easy to control, says Chirhuza, who has worked at the center for seven years.

“Fight has been in DRC for a long time,” Chirhuza says. “Exploitation of mineral wealth, ethnic problems and land conflicts are the main reasons for trouble in Congo.”

UNICEF and its partners are doing all they can to rehabilitate young people who were pressed into combat in childhood, says André Moussa, head of child protection at UNICEF. The organizations aim to help former child soldiers heal from combat trauma and adjust to civilian life.

The Transit and Orientation Center offers a variety of mental health and job placement services.

Tumusifu first went to the Jericho Foundation, as his uncle suggested, but soon found the Transit and Orientation Center.

“The children who come here are helped by psychologists,” Chirhuza says.

At the transit center, all former child soldiers follow a three-step program of observation, communication and orientation, he says.

During each young person’s first month at the center, the team of experts monitors his behavior and develops a suitable treatment plan. In the next step, psychologists begin talk therapy with the former soldier. Finally, the young person begins to reorient to life outside the center, returning to school or starting jobs.

Most former soldiers spend a year at the center, Chirhuza says.

“They come in with different mental problems,” he says. “There are some who have difficulty sleeping and others who are completely mad.”

Tumusifu successfully completed all three steps of the program.

He now works as a welder, a job the center helped him obtain. He is grateful for the work of the transit center and the Jericho Foundation, where he says he learned to be a good Christian and to stop drinking.

Recovering from combat trauma can be a long, trying journey.

Moussa, 13, was kidnapped by the Allied Democratic Forces-National Army for the Liberation of Uganda, or ADF-NALU, two years ago. His last name was withheld at the request of UNICEF.

Although not well-known, ADF-NALU is one of the oldest militias in eastern DRC. It is the only group in the area that is considered an Islamist organization, according to International Crisis Group.

By the time Moussa came to the transit center, his left leg had been severed below the knee.

“I was going to school when soldiers took us,” he recalls.

Moussa and the other children at the base were most often just required to bring water, cook and clean for the soldiers, he says. Then, one day, the militia’s base was raided.

“One day we heard sounds of gunshots and everyone began to run,” he says. “By the time that I asked myself what was happening, I felt a heavy shock in my leg, and I fell down.”

Moussa, then 11, had been shot in the leg. A soldier from the DRC army took him to a hospital, where army doctors decided to amputate.

Now in step two of his treatment, Moussa says he is learning to be happy again. He enjoys the company of other former child soldiers.

“I eat well,” he says. “I sleep on a comfortable mattress, and I play with my pals.”

Tumusifu, now 19, says he is adjusting to civilian life. He uses the religious and psychological skills he has learned over the last year every day. The young welder earns 9,200 francs ($10) a day, enough to live on.

“I pay for my rent, I don’t drink alcohol anymore or smoke hemp, and I am Christian,” he says.

UNICEF aims to eliminate the use of children in conflict, André Moussa says.

Prospects are not encouraging. According to a 2010 Child Soldiers International report, “international initiatives aimed at halting child recruitment and use have also failed to alter what is a firmly established practice” among militias operating in the DRC.

Nonetheless, Moussa says he is hopeful that UNICEF will ultimately succeed.

New partnerships between international organizations and the DRC government are persuading armed groups to stop pressing children into service and to release those in their custody, André Moussa says.

UNICEF also is working with the Ministry of Justice to release onetime child soldiers from prisons.

“Now the number of children rescued from rebel groups is increasing,” he says. “This shows that our goals are being realized.”

No sources in the article are related.