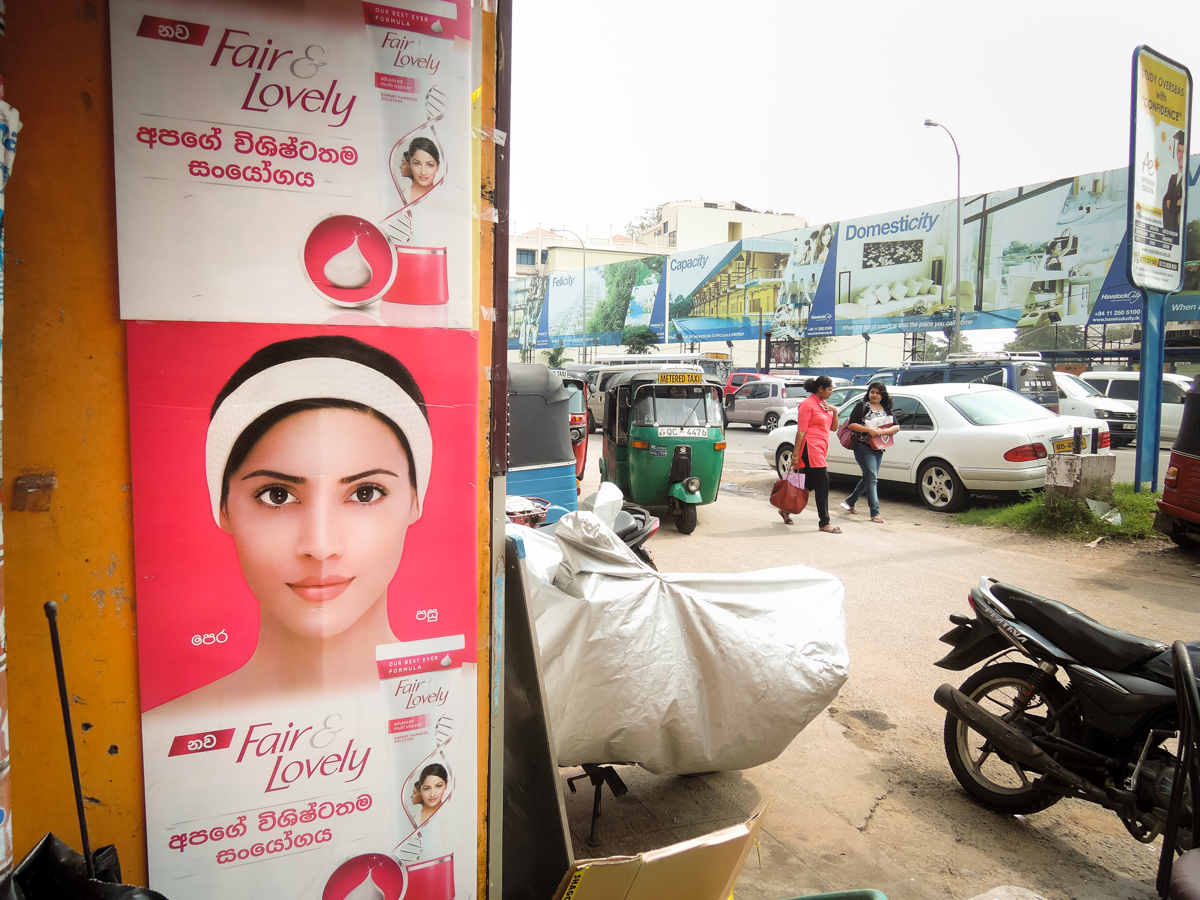 BAMENDA, CAMEROON – Marie Therese’s outfit – a short-sleeved blouse and a knee-length skirt – plainly reveals a multicolored body. Countless stretch marks have broken open on the backs of her feet and hands. She looks older than her age. [[map]]

Fearing stigmatization, Marie Therese asked that her surname not be published.

Marie Therese, 34, a trader in secondhand dresses at the main market in Bamenda, the capital of Cameroon’s Northwest region, used to have dark brown skin, she says. Her skin color changed when she was 21.

Soon after she got engaged, her fiancé started cheating on her with a fair-skinned woman. Thinking that her fiancé found the other woman more attractive because of her color, Marie Therese decided to bleach her skin. She had heard people say light-skinned women are more attractive.

“Like a joke, I bought a tube of cheap Dermovate cream, and before a month, my whole body was light,” she says.

Dermovate is a medicine used to treat skin conditions such as eczema and psoriasis. However, because skin-lightening is a side effect, many consumers use it solely as a skin-bleaching cream.

Two years later, when her skin tone became uneven, Marie Therese regretted her decision. She used more creams in an effort to repair the damage.

“If you stop bleaching, your body becomes uglier than your original self,” she says. “If you continue for so many years, it becomes even worse. Let me tell you, many women who are bleaching their skin like me are regretting.”

Marie Therese continued trying to fix the unevenness with skin-whitening creams for the next 13 years. She stopped using them seven months ago after realizing they were doing her body more harm than good.

“If I had known, I wouldn’t have ever touched bleaching cream on my body,” Marie Therese says. “It is the biggest mistake I have ever made in my life.”

Motivated by a common belief that fair-skinned people are more attractive and successful, millions of Africans and South Asians lighten their skin with cosmetic products and homemade compounds.

Some skin-bleaching products have countless negative consequences, experts in dermatology and aesthetics say. They call for regulation of the cosmetics industry and advise women who want to lighten their skin tone to seek the care of qualified skin specialists.

Demand for skin-lightening products is rising dramatically. The world market for skin lighteners is expected to reach $10 billion by 2015 and $19.8 billion by 2018, according to Global Industry Analysts, a market research publisher.

Skin-whitening products make up one of the fastest-growing segments of the global beauty industry, according to the report.

The lightening-cream industry capitalizes on a growing desire for fair skin in Asia and Africa, the report says. That desire is rooted in discrimination based on skin tone.

Typically, a fairness-cream user will apply the product topically twice a day. Some products will significantly whiten skin within two weeks.

Seated at the dining table of her home in Mount Lavinia, a Colombo suburb, Mohideen says lightening her skin has made her more attractive.

“I am really happy and proud about myself when others talk about my skin,” she says. “I hope I hold onto my flawless, youthful-looking skin.”

For the past three years, Mohideen has also been working part-time as a direct marketing representative for a cosmetics company. She started using a fairness cream made by the company about six months before she was offered that job.

Lightening her skin has helped her achieve success, she says.

“I feel it helps me a lot to earn extra income as a breadwinner of the family,” she says.

One need not look far to see evidence of a social preference for lighter skin, says Inoka Priyadarshani, a Sri Lankan social scientist and consultant. When parents take out newspaper ads searching for a mate for an adult son or daughter, they often include “fair-skinned” among the qualities they are seeking.

“The influence of peers and advertising are the main reasons for this skin-whitening and fairness trend,” Priyadarshani says.

Sri Lankan companies began importing beauty products, including fairness creams, after the country’s economy was liberalized in the late 1970s. The products are now available everywhere in the country, from small grocery stores to large supermarkets.

Like South Asians, many dark-skinned African women believe they would be more desirable if they had lighter skin.

Sylvia Nakate, a hair stylist in Kampala, Uganda’s capital, started lightening her skin in 2011. It’s understood in Uganda that fairer-skinned women are more attractive, she says.

Nakate also uses the products because she thinks it is the best way to keep her man.

“I have a stable marriage,” she says. “I no longer worry that when we go for a party my husband will be staring at brown women.”

Arnold Baker Mwebwa, a motor vehicle mechanic in Kampala, is among many African men who find fair-skinned women more attractive.

“Women who are light-skinned are exciting,” he says. “It is easier to get attracted to them than dark-skinned ones.”

Cosmetics retailers confirm that demand for skin-bleaching products is increasing.

Senthilperumal Salwarppan, manager of a small grocery store in Colombo, says the best-selling item among the store’s fairness creams is a small sachet of cream priced at 40 rupees (31 cents).

Popular Indian and Sri Lankan models and actors endorse the products, becoming the public faces of their brands. Many fairness-cream consumers, unable to recall the name of a product, will refer to a TV or newspaper advertisement or mention an actor who appears in it, Salwarppan says.

In Cameroon, people have been bleaching their skin for more than three decades, says Martha Abongwa, a sociologist specializing in women and gender studies.

The popularity of the practice has reached a new high in the 21st century, says Abongwa, who is researching skin-bleaching trends in Cameroon and hopes to soon publish her work in a journal.

Far more women than men bleach their skin in Cameroon, she says. Men make up less than 15 percent of lightening-cream users.

Like Marie Therese, some women have suffered grave harm from skin whitening.

Radhika Vishwanadhan, a 33-year-old Sri Lankan woman from Hatton, a town in Sri Lanka’s Central Province, has a striking scar on the left side of her face. The skin has peeled and lightened to a pale pink, contrasting with the natural brown of the rest of her face.

She got the scar almost three years ago after using a fairness face wash her sister had given her.

“I applied it daily for nearly a month,” Vishwanadhan says. “After a few days, I saw a skin rash on one side of the face like a white-colored fungus.”

She has visited many doctors and tried several home remedies, but nothing has removed the scar. She hopes she can have the scar removed soon so her parents can arrange a marriage for her.

To make skin whitening affordable, a consumer will often cut a high-quality cream – which may cost about 1,500 francs ($3) – with a lower-quality cream that sells for 500 francs (95 cents) or so, Acha says.

“How can a woman look good if she goes applying such cheap and dangerous lotions on her body?” he asks.

To avoid the negative effects of commercial products, some Asian and African women seek out organic ways to bleach their skin.

Ugandan Joyce Kawuku, director of Halleluyiah Beauty Centre, a Kampala-based company that sells bleaching creams, says her natural mixtures never cause side effects. The company uses natural ingredients such as pawpaw, honey, eggs, avocado and a local herb – known as ekigagyi in Uganda’s majority language, Luganda – in its bleaching creams.

“Ever since we started making these products about seven years ago, I have not seen anyone come here and say the creams have affected them negatively,” Kawuku says.

“I started lightening my skin in 2011 May, and I have not experienced any bad outcomes as a result of bleaching,” she says.

Sumana Jayathilake, 72, a retired teacher living in Pannala, a town in Sri Lanka’s North Western province, has used a paste made of ground turmeric since she was in her early teens.

She attributes her clear, unlined facial skin to a lifetime of avoiding chemical products.

Many people throughout the region – both men and women – say it’s time to alter social standards of female beauty.

Patrick Musinguzi, a motor vehicle mechanic in Kampala and a colleague of Mwebwa’s, says a woman’s essence is in her character, not her skin tone.

“For me, it is not about the color,” he says. “It’s those special qualities I am looking for. Bleaching may not be necessary.”

Evania Fuh, a woman who works for the Northwest regional delegation of the Ministry of Women’s Empowerment and the Family, says she would never bleach her skin.

“Quite often, women become more unattractive in their bleached skin,” she says. “I wish I could help tell them to stop doing what they are doing.”

Experts in Uganda and Sri Lanka warn women to be cautious in using skin-bleaching products. They also call for regulation of the cosmetics sector.

Bleached skin is vulnerable to sunburns and diseases caused by constant exposure to strong light, says Dr. Francis Asiimwe, a Kampala-based dermatologist. In addition, bleached skin may be intolerant of other cosmetics, and it does not age well.

“Some skins get thin, and thin skin easily gets wounds and more complicated forms of infections,” he says. “They also wrinkle badly as they age.”

Asiimwe doubts that natural products such as those Kawuku sells in Kampala can effectively bleach skin.

Asiimwe advises women who want to lighten their skin to seek the services of a professional.

“It is possible [for one to bleach their skin in a safe way], if one contacts a knowledgeable person and their skin is tested first and then given steroid-free and mild or hydroquinone-free products,” he says.

“The skin-whitening trend will be dangerous in the near future,” he says in a phone interview. “It will lead to skin cancers and different varieties of skin diseases if it is not done with proper knowledge.”

Samarasinghe urges the state to regulate the cosmetics and beauty industry in Sri Lanka and require minimum educational qualifications for beauty salon workers who provide skin treatments of any kind.

Marie Therese has lost hope of regaining healthy skin. Bleaching has made her skin so thin that she’s easily hurt, she says.

“Sometimes just a minor scratch will peel off my body, leaving a wound there,” she says. “I have experienced this countless times.”

After all she sacrificed, Marie Therese wound up not marrying her fiancé.

“I thought I was making myself beautiful for my fiancé,” she says. “Little did I know that I was instead scaring him away. He finally left me for another woman, saying he was ashamed of my multicolored body.”

“I am appealing to women to love their natural skin color,” she says. "Skin bleaching, most often, makes us more unattractive.”