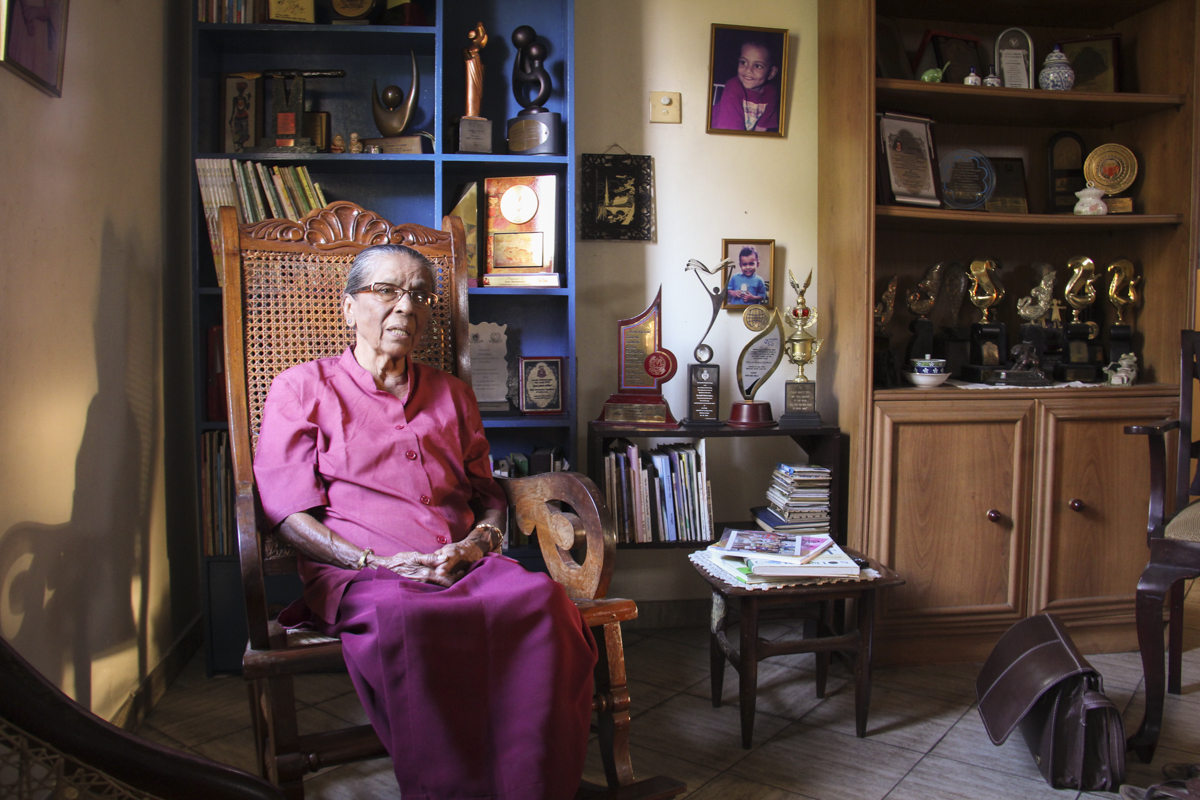 COLOMBO, SRI LANKA – “I write about things children don’t see to promote their imagination, and also I live in my imaginative world,” says author and illustrator Sybil Wettasinghe, 85. “It is a great experience and a great joy for me.”

Wettasinghe’s name is synonymous with children’s literature in Sri Lanka. Several generations of Sri Lankans who have read her books know her as “Aunty Sybil” or “Grandma Sybil.”

Her books have also taken Sri Lankan culture and local stories to an international audience. Her stories, such as “Umbrella Thief,” “Hoity the Fox” and “Run Away Beard,” are popular locally and internationally, she says.

Wettasinghe draws inspiration for her stories from her childhood, she says. She weaves her narratives and illustrations around Gintota, a coastal town in southern Sri Lanka where she grew up in an idyllic village and was free to explore and to learn on her own. Her books have taught people nationwide and around the world about rural Sri Lanka.

Wettasinghe also draws inspiration from her four children and five grandchildren, she says. The idea for “Girl in the Sky” came out of her efforts to persuade her eldest daughter to eat her meals, and she wrote “Hoity the Fox” to introduce new types of food to her youngest son.

Wettasinghe is also well-known for the illustrations in her books. The simple line drawings have become her distinctive style.

Wettasinghe became a published illustrator at age 14 when she created illustrations for a children’s schoolbook. She went on to build a career as a newspaper illustrator and a columnist in several newspapers in Sri Lanka that spanned nearly 40 years. Older Sri Lankan generations remember her satirical weekly columns on society in Colombo, the commercial capital, and social issues in the 1950s and 1960s.

After a colleague encouraged her to write fiction, a newspaper published her first story, “Umbrella Thief,” in 1953, she says. It was published as a book with illustrations three years later.

“It was a black and white book and became very popular because there were no books published in that format that is both story and pictures before,” Wettasinghe says. “So, even the children who couldn’t read could understand the story through the pictures. It was a trailblazer. It paved the way for a lot of other work.”

Wettasinghe’s career as an author and illustrator has spanned more than five decades. She has published more than 300 books, she says.

She has published children’s stories in both Sinhala – the language of Sri Lanka’s majority group – and English, as she prefers to write the same story in both languages rather than translate it. Most of her work has been translated to other languages as well, such as Japanese, Swedish, Chinese, Norwegian, Danish, Korean and Tamil  – the language of Sri Lanka’s minority group.

Wettasinghe has received many international awards for her work. Those awards include the Nikkei Asia Prize for Culture in 2012; the Most Popular Children’s Book award from the Tokyo Children’s Library in 1987; and the Best Foreign Book Award in Japan in 1986 from the former Ministry of Cultural Affairs of Japan.

In 2005, the Sri Lankan government awarded Wettasinghe the honorific title of Kala Keerthi, one of the highest national honors reserved for people who demonstrate extraordinary achievements in and contributions to arts, culture and drama. She has also won various State Literary Awards from Sri Lanka’s Ministry of Culture and the Arts.

Gevindu Cumaratunga is the managing director of Visidunu Prakashakayo, a publishing company in Sri Lanka that has reprinted many of Wettasinghe’s books. Wettasinghe’s ability to present the local village culture to her audience is the most unique feature of her stories and gives them appeal beyond Sri Lanka’s cultural limits, he says.

“In 2012, when some Japanese delegates visited Sri Lanka for a felicitation event for Aunty Sybil,” Cumaratunga says, “they said that, ‘Nowhere else have we seen stories and artwork which brings out the culture of a country so well,’ and I think that sums up her uniqueness.”

Wettasinghe’s books should reach a wider audience, he says. He has been marketing and widely distributing her books in Sri Lanka through his publishing company so that more citizens make use of them.

“We have underutilized her work for the last three to four decades,” he says. “About five to six years ago, most of the children’s books that were being published were books with computer-generated images with no cultural values in the stories. Now, things are changing. Aunty Sybil’s work can be used as supplementary reading in schools, along with the books we use now.”

Sulochana Dissanayake also works to expand Wettasinghe’s audience as the founder and artistic director of Power of Play (Pvt) Ltd., a company that uses and promotes performing arts as a tool for communication, development and education. She has used a number of Wettasinghe’s stories in the company’s puppet shows and dramas for children in urban areas to teach them about life in rural areas and moral values, she says.

Wettasinghe has been able to make her childhood experiences growing up in Gintota relevant worldwide through her books, Dissanayake says.

“She brings it forth in a story style so that children anywhere in the world can appreciate that environment and experience,” she says. “Most of her stories are village-based, and when you hear the story, you also hear about the culture of the village, what they do, what they eat, what are their problems, and how they live life in a village. And that, in a sense, is a preservation of culture in a true artistic medium.”

The simplicity of Wettasinghe’s stories ensures that a child from any country or culture in the world can enjoy the story, Dissanayake says.

“That beauty is in the simplicity, and to be truly simple is the most complex thing,” she says. “It’s the simplicity that makes it approachable to children around the world.”

“There is this magical effect of her artwork,” Dissanayake says. “It is very simple. It is very soothing. Her colors are brilliant, and it’s just bursting with energy, life and joy.”

“What I do is bring her brilliance off the page,” Dissanayake says. “I do very little. She has done the hard work – she has conceptualized the story, done the artwork – so when I look at one of her artworks, I feel the sounds, feel the dialogue that is in that picture.”

When Dissanayake first read Wettasinghe’s books as a child, they enchanted her so much that her father took her and her siblings to meet the author, she says. The two have maintained a friendship since then, and Wettasinghe sometimes comes to Dissanayake’s performances and talks to the children after.

In addition to connecting with fans, Wettasinghe continues her creative work – 70 years after writing her first book. As she has done for many decades, she still occupies her mornings with writing and illustrating. She is currently working on drawings of Sri Lankan folk dances for a Japanese publication.

“I thrive on this,” Wettasinghe says. “When I draw or write, I don’t know what happens around me.”