Skip to main content
The story you are reading was published on Tuesday January 5, 2016. To read more recent stories click here. 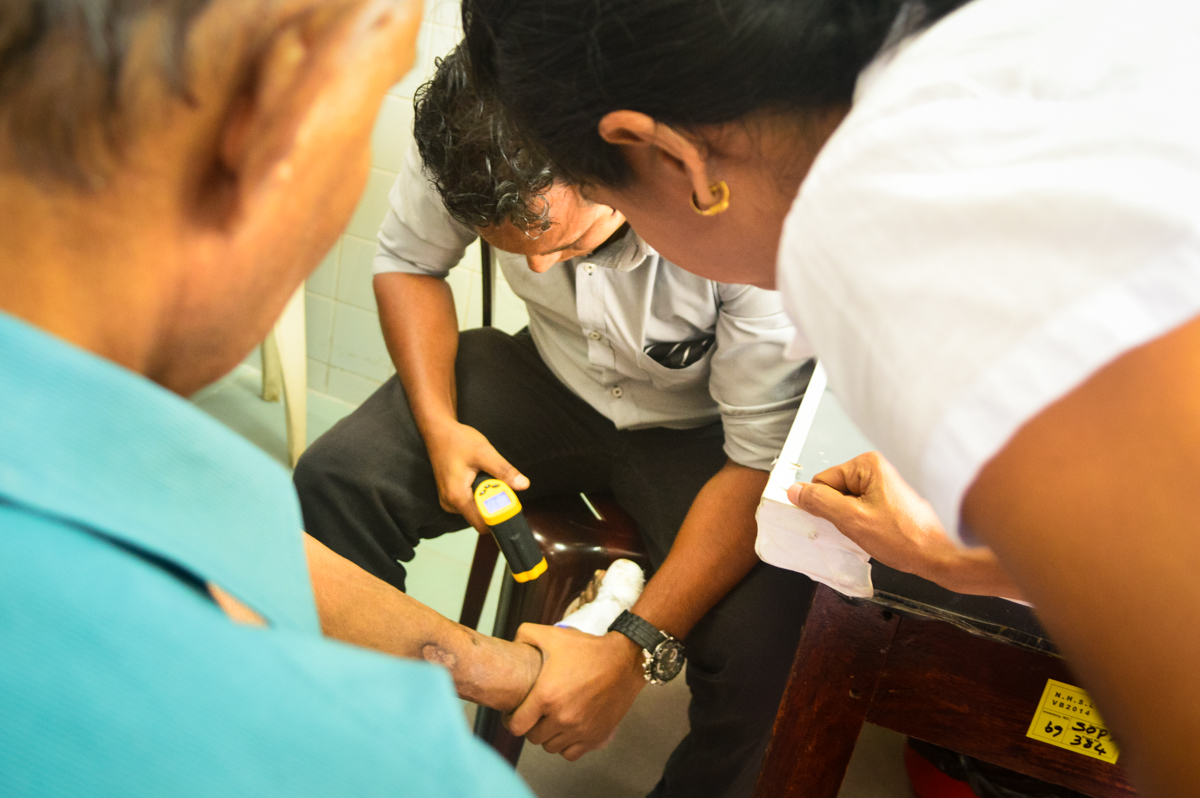 COLOMBO, SRI LANKA – The smell of antiseptic and sweat is overpowering in the large waiting room outside Clinic 19 at the National Hospital of Sri Lanka in Colombo, the nation’s commercial capital. Every Monday, this clinic treats about 100 diabetic patients who travel here from all over the country.

It’s only 9 a.m., but the waiting room is full. There aren’t enough seats, so many people stand or sit on the floor. Treatment here is free under Sri Lanka’s national health care policy.

Dr. Thusitha Kahaduwa sits in a corner of an exam room, examining a patient’s foot and recording his findings in a notebook.  The 34-year-old is a medical officer in vascular transplant and wound care at the National Hospital.

The patient, H. Galagedara, 61, was diagnosed with diabetes in 2000. His right leg was amputated at the knee in 2005 after a foot ulcer spread undetected. He now wears a prosthetic leg.

Kahaduwa frowns as he examines Galagedara’s left foot. As Galagedara stretches it out, the doctor holds a small black tube-like instrument that focuses a blue infrared light over different parts of the leg. This instrument, named Footie, is a diabetic foot assessment tool that Kahaduwa invented in 2014. 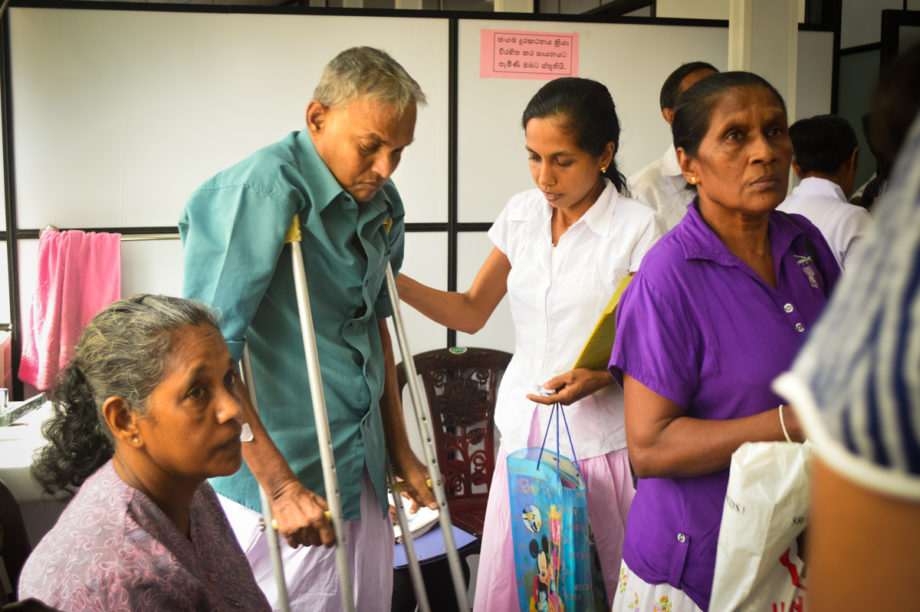 Dilani Promodya, in white blouse, helps her uncle, H. Galagedara in Clinic 19 at the National Hospital of Sri Lanka, where Galagedara had his right leg amputated in 2005 due to a diabetes-related infection. A tool invented by one of the clinic’s doctors recently helped detect an infection in Galagedara’s left leg.

Footie has found the temperature of Galagedara’s left leg is high compared to the right leg. This indicates a possible ulcer forming beneath the skin that is not yet visible to the eye.

“There is an infection in his foot,” Kahaduwa says, addressing the patient and his niece. “It needs to be treated before it advances further. He will have to be admitted to the hospital today.”

Kahaduwa’s invention, still a prototype with a patent application pending, has been effective in identifying increased skin temperature and lack of sensation in the feet of diabetic patients – signs that a foot ulcer may be growing. Kahaduwa hopes eventually to produce and sell Footie.

Globally, diabetes will have by the end of 2015 caused 5 million deaths of people age 20 to 79, according to the International Diabetes Federation estimates, or a death every six seconds. About 415 million people in that age group have diabetes. An estimated 8.3 percent of all Sri Lankans are diabetic, according to 2014 data published by the federation, about the same as the global average.

If this instrument was there before, we could have saved my right leg too. But I’m happy we detected the infection in my left leg today. If not for Dr. Kahaduwa, my life could have changed entirely. H. Galagedara, 61, a diabetic patient

But Dr. Prasad Katulanda, a senior lecturer in clinical medicine at the University of Colombo, says one third of people with diabetes or pre-diabetes in Sri Lanka are not diagnosed.

Diabetes is an epidemic, Katulanda says, and it has started to take a toll on Sri Lanka’s economy.

“People who are middle aged or just above middle age and breadwinners are getting sick,” Katulanda says. “They are losing their legs, some suffer and some die because of diabetes. This affects their families. It is a national problem.”

Katulanda says he believes Footie is a useful instrument and can be a benefit to diabetic patients around the country if it can help prevent foot amputations.

Kahaduwa says diabetes affects the nervous system, causing patients to lose sensation in their feet. That affects their ability to know when a wound is forming under the skin. Left untreated, those wounds deepen, forming an ulcer.

“A diabetic patient has a poor immune system,” Kahaduwa says. “So his body can’t fight any bacteria growing in the wound.” 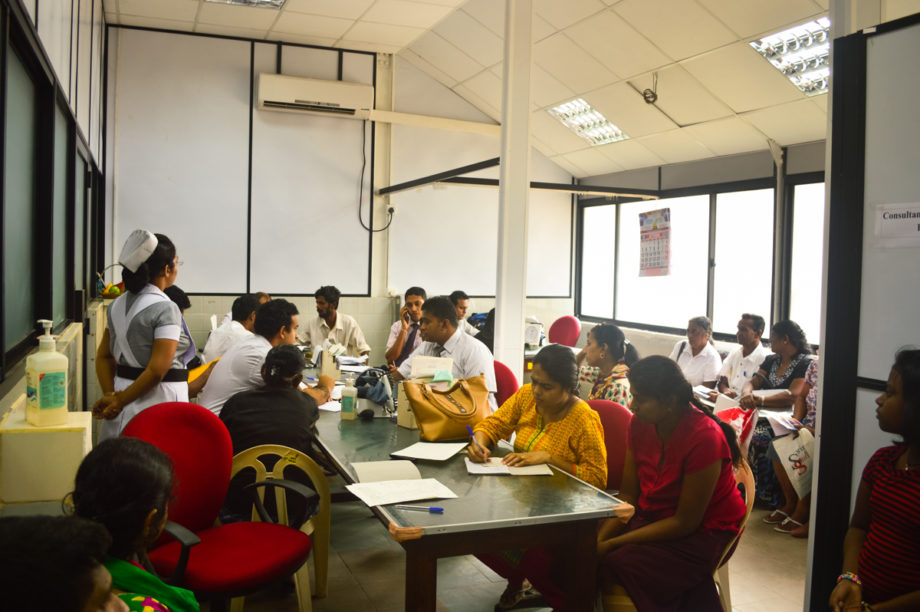 Patients wait to see a doctor at the National Hospital of Sri Lanka in Colombo, where doctors treat about 100 diabetes patients each Monday at a special clinic.

Footie is Kahaduwa’s sixth medical invention. He says his fascination with wounds drives him to find better ways to detect and treat them early.

“Engineers don’t know what we want,” he says. “When I listened to stories of diabetic patients, I realized we needed an instrument like Footie.”

Kahaduwa says he asked a friend who is a mechanical engineer to help him develop Footie. Starting in April 2014, it took Kahaduwa and Buddhika Marasingha almost a year to research, build a prototype and carry out a peer review of Footie. Made of plastic, the Footie prototype cost around 25,000 rupees ($176) to build. It is, for now, only being used by Kahaduwa and his colleagues at the National Hospital. He applied for a patent for Footie in August 2014.

Other medical professionals say they respect his ability to innovate and invent medical instruments that meet specific needs. Mandika Wijeyaratne, a consultant vascular and transplant surgeon at the National Hospital, has been a boss and mentor to Kahaduwa.

“Our setup or institutions do not encourage innovation and technology,” Wijeyaratne says. “Dr. Kahaduwa has to stick around in this system and do the innovation part outside of it.”

Our setup or institutions do not encourage innovation and technology. Dr. Kahaduwa has to stick around in this system and do the innovation part outside of it.Mandika Wijeyaratne, a consultant vascular and transplant surgeon at the National Hospital in Colombo, Sri Lanka

There are other temperature monitoring tools available, Wijeyaratne says, but Footie is unique because it combines several instruments in one – such as the mirror for easy visibility, the probe to test vibration sensation and the thermometer.

Kahaduwa has been working to improve the prototype by making it more user friendly, and to create a cost-effective instrument he can sell to patients. Those patients could then record their own data and inform a doctor if there are signs of ulceration, Kahaduwa says.

Galagedara, the patient whose left leg had an elevated temperature, was hospitalized for five days, but that leg is intact.

“If this instrument was there before, we could have saved my right leg too,” Galagedara says. “But I’m happy we detected the infection in my left leg today. If not for doctor Kahaduwa, my life could have changed entirely.”