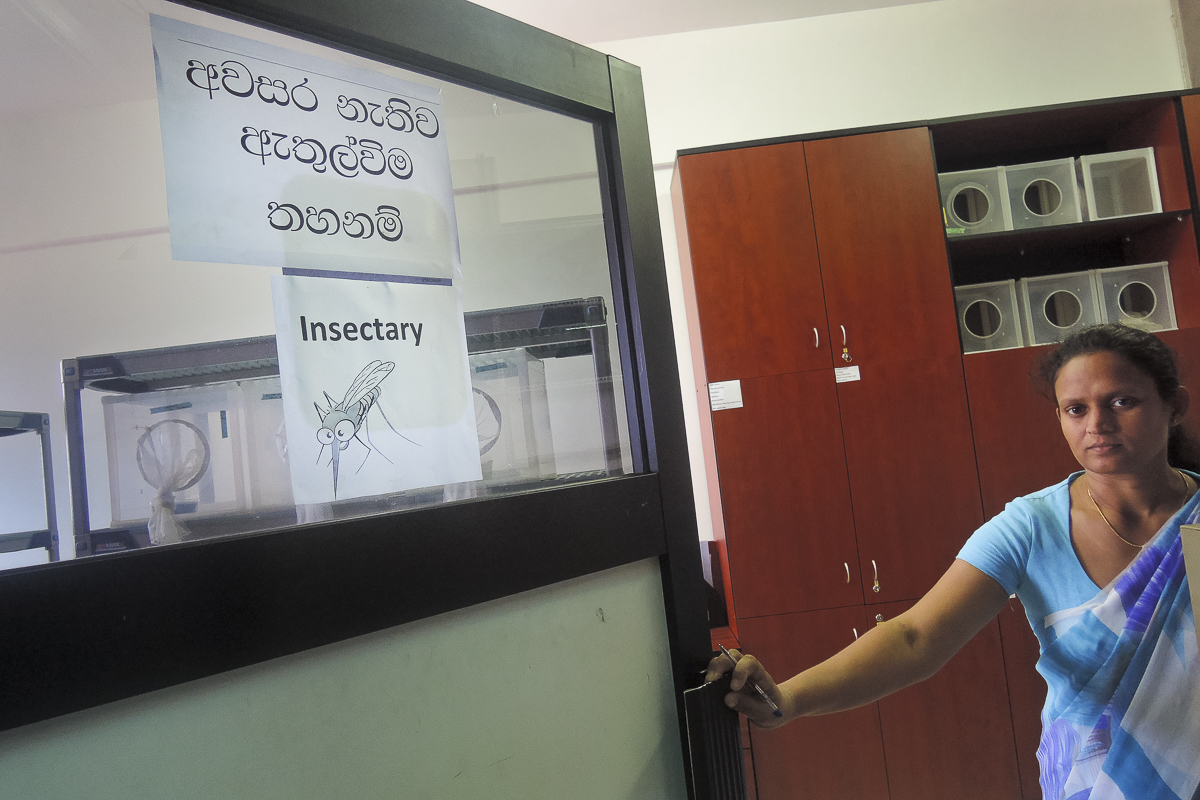 COLOMBO, SRI LANKA — Malaria has been eradicated from this tropical nation, and, because the country was known as a hot spot for the disease for decades, health officials are celebrating.

The country was officially certified by the World Health Organization as malaria-free on Sept. 5, 2016.

There have been no cases of indigenous malaria on the island for nearly four years.

Even so, health experts say, people in Sri Lanka should remain vigilant. Prior successes in limiting the number of malaria patients led to lax practices, leading to more outbreaks.

Nirasha Piyawadani of the Sri Lanka News Desk met with Dr. Risintha Premaratne, director (research) of the Ministry of Health, Nutrition and Indigenous Medicine, to discuss the country’s new malaria-free designation. Premaratne is the former director of the Anti-Malaria Campaign, the government agency that spearheads malaria eradication work in Sri Lanka.

What is the impact of Sri Lanka’s malaria-free status?

The international recognition as being malaria-free has a huge impact on our tourism industry. Not only tourism, even large-scale foreign investors will now be confident about the health of the workforce in the country.

Malaria impacts a person’s blood. It destroys the red blood cells, and leaves the patient weakened. They are unable to participate in the workforce, and the labor input that they contribute to the country is diminished.

Many of the malaria patients in the country are farmers, so it had an impact on the agriculture sector in some areas. Not only agriculture, even industries like gem mining were affected. If malaria had continued its course, it would have led to a more widespread weakening of these sectors.

Reaching this malaria-free status is a result of many years of incessant work towards this goal, so it is a great achievement and victory for the country.

Has Sri Lanka brought indigenous malaria down to zero? Is that confirmed?

[The World Health Organization] certifies a country as malaria-free if there is no record of even one person having contracted the indigenous strain of malaria within a three-year period.

This certification is a hard-fought one, with years of sustained work behind it.

But there is always a danger of a strain of imported malaria being brought into the country ─ when a mosquito bites a person with a foreign strain of malaria and they bite a noninfected person, the malaria parasite can be passed on. 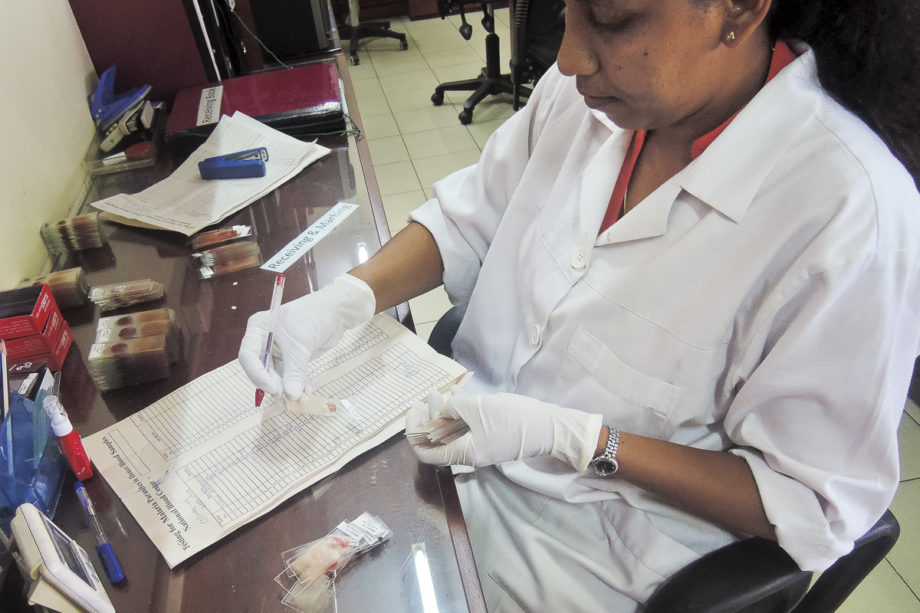 Technicians work at the Public Health Laboratory of the Anti-Malaria Campaign. The lab’s work was scrutinized as part of the certification process carried out by the World Health Organization before it declared Sri Lanka to be malaria-free.

How do we prevent malaria from coming back?

If the number of malaria patients, or, as we say, the malaria reservoir, becomes high, then the danger of malaria spreading in the country becomes very real.

If we can keep the number of malaria patients low, then the spread of the disease through mosquitoes will be kept low as well.

Experts say that the simplest way to reduce the malaria reservoir is to treat the patient quickly, which means the fact that the patient has malaria has to be identified rapidly.

This means we can’t wait for people to come to hospital displaying signs of advanced malaria symptoms, but instead we should continue with the mobile clinics. These go into areas which are malaria-prone and test the blood of the locals and identify if anyone is infected.

Sri Lankans are in danger of contracting the disease while in a foreign country, not their own. What do Sri Lankans need to do when they travel abroad to prevent being infected with malaria?

Anyone traveling to a malaria-prone country should take preventative medication.

If a traveler displays any symptoms of malaria while on travel, they should seek treatment as soon as possible.

Sri Lankans must now become aware of the possibility they can contract malaria outside Sri Lanka, and they can bring it back to the country.

Now that we are malaria-free, what kind of malaria awareness work is being done in the country?

We work through the media to inform people about malaria and its symptoms. I don’t think the level of awareness about malaria among the general public is still sufficient.

The current public focus is on dengue, another mosquito-borne disease. We believe that the kind of public effort and energy being given towards eradicating the dengue mosquito should be extended to the eradication of malaria too.

The malaria-free certification is an ideal time to talk about how to maintain the status, rather than allow it to become a forgotten disease.

The World Health Organization declared in 1955 that malaria could be eradicated by using DDT spray, and launched the Global Malaria Eradication Programme. In 1958, that program began in Sri Lanka, where it was successful. By 1963, there were only 17 malaria patients in Sri Lanka.

Health advocates celebrated this drop in malaria cases; antimalaria programs, including fumigation in some mosquito breeding areas and blood-test monitoring of people in high-risk areas, were gradually discontinued.

But the disease returned, and by 1969 there were more than a half-million cases reported. The health sector’s relaxed approach to malaria management in the mid-1960s led to a 50-year fight to control the disease.

Malaria can’t be forgotten, as there are still thousands who contracted malaria in the past. What are the long-term effects for those people?

Since we now have medication which can cure malaria completely, there are very few patients with lingering symptoms, especially if they received treatment in the early stages.

But if a patient has not been treated early and was only treated in acute stages, maybe even treatment in the intensive care unit, then recovery can take up to about a year, where he will feel weak.

Of course the worst-case scenario in malaria, where it is not detected in time and you don’t receive treatment, is death.

At its peak, how bad was malaria in Sri Lanka?

In 1934 and 1935, health records at the time show that around 1.5 million people contracted malaria.

An epidemic of malaria at this time had killed around 80,000 people within a seven-month period. This amounts to about 400 people a day dying of malaria. There are records of entire hamlets being wiped out by malaria.

The Anti-Malaria Campaign has been ongoing in Sri Lanka for more than 30 years. How will the work of the campaign change with this certification?

Just because there is a drop in malaria patients at present, that does not mean we can rest. In fact, there are lessons in the past when we have relaxed too soon and malaria has reemerged.

As a country, we shouldn’t plan to start any new programs because we have obtained this malaria-free certification, but instead we should continue the successful monitoring and quick-response work we have been doing.

We are constantly monitoring people in at-risk areas ─ and now people ask why they are being tested if malaria has been eradicated. Not only those who travel abroad, but also those who come into regular contact with foreign visitors from malaria-prone countries are being tested.

We have to continue to be vigilant.

So then is it too early to celebrate being malaria-free? When will we know for certain?

On the morning of Sept. 8, 2016, I received a call from a Colombo-based private hospital that a patient who had gone on pilgrimage to India had been detected with malaria. There were 60 pilgrims in that group. We immediately sought information about where the group had traveled and where the pilgrims were located after their return ─ we had all this information before the end of the day. Health authorities know it’s vital to inform the Anti-Malaria Campaign office the second they identify a malaria patient.

Through local doctors, we ensured that all 60 pilgrims were tested for malaria, and some were given low-dose medication as well.

I think the malaria-free certification not only proves we have eradicated the disease from our shores, but it is also a testimony to the effectiveness of monitoring and sharing information and acting with speed when a patient is found anywhere in the country.

What we need now is not to rest on this achievement, but to use it as a steppingstone to continue the work that has been done and to achieve more.