Skip to main content
The story you are reading was published on Thursday February 18, 2016. To read more recent stories click here. 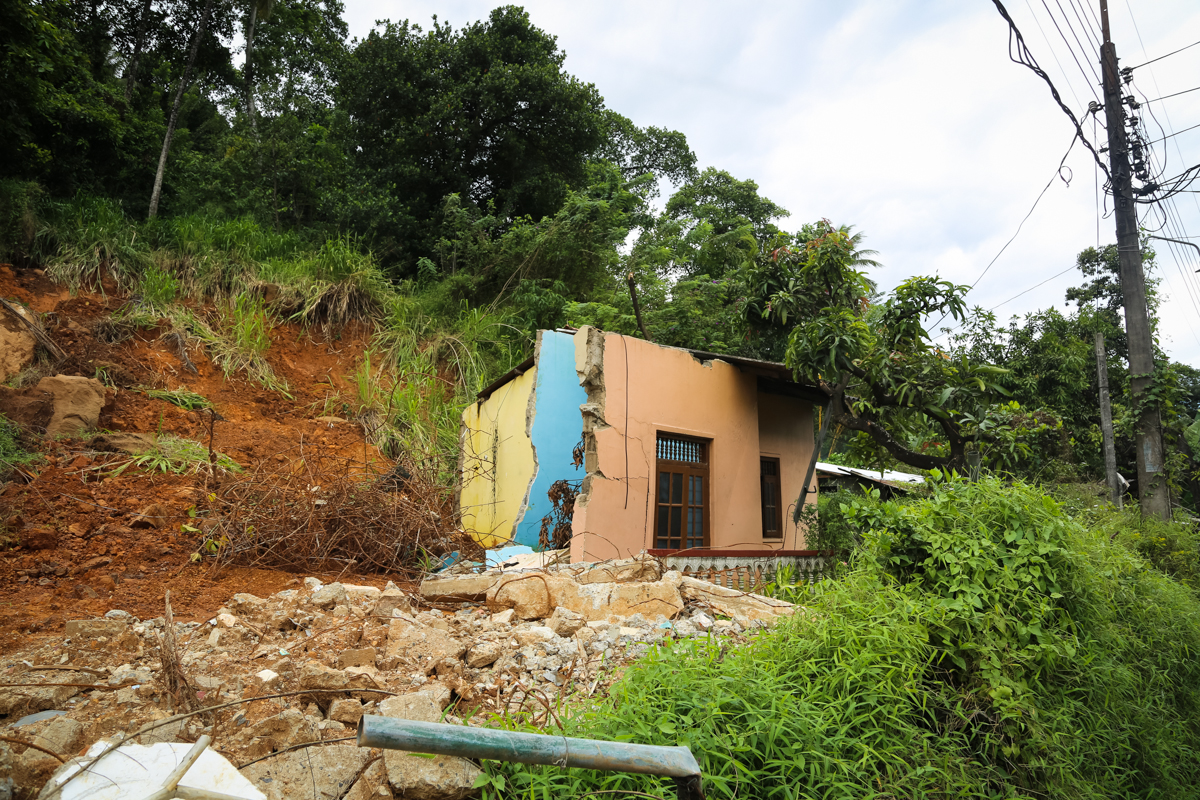 BOGAWANTALAWA, SRI LANKA — Jensley Franjis says she did not sleep peacefully for more than six weeks after heavy rains began in November 2015. She stayed awake listening for sounds of falling rocks or other debris.

Franjis, 32, lives with her husband and three children on Kew Estate, a tea plantation in the picturesque Bogawantalawa valley, about 150 kilometres (93 miles) from Colombo, Sri Lanka’s commercial capital.

The high elevation makes the area ideal for growing team, but the mountainous terrain also makes it prone to landslides and rockfalls.

Franjis says that after a night of rain, she often finds small rocks that fell near her home.

“Stones of different sizes have fallen down at dawn,” she says. “We are anxious about when the massive-sized rocks will collapse from the unstable slope.”

Franjis, like many estate workers, lives in one of the many small spaces carved from a single long building. Each living space is known as a “line room.”

There were minor landslides on Kew Estate in November and December, estate residents say. 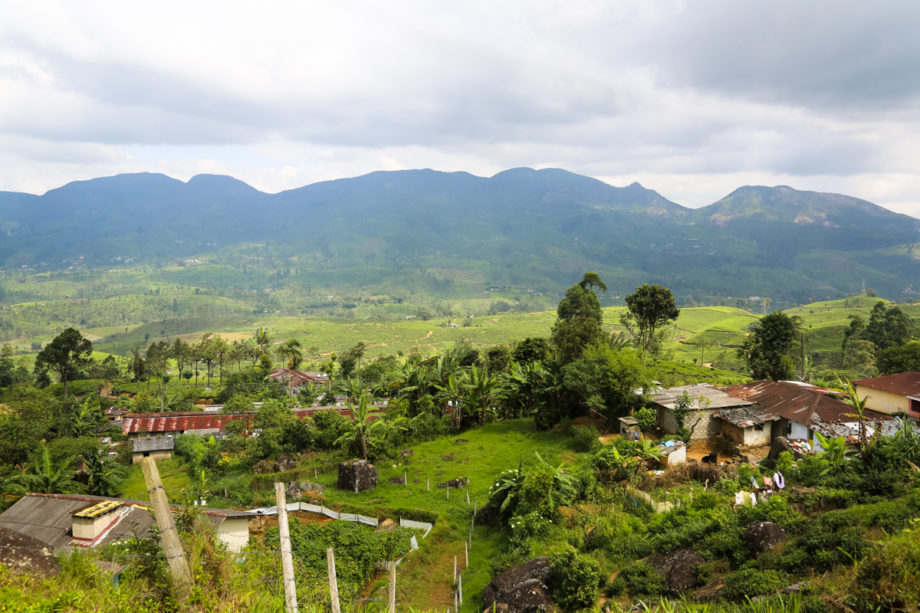 The line rooms, where workers live, are found in various locations around Kew Estate and are often built near small hills, some of which are in danger of collapsing.

Landslides are an increasingly common phenomenon in Sri Lanka. There were 75 recorded landslides in 2015 –a 40 percent increase compared to 2014, according to I. A. K. Ranaweera, assistant director of the Disaster Management Centre’s (DMC) Kandy District Office.

Until 2002, landslides were often considered a minor type of disaster and not a common occurrence throughout the country, says Kapila Dahanayake, a professor in the Department of Geology at the University of Peradeniya.  And in previous decades, landslides were very rare.

“Landslides were hardly reported 40 years ago,” Dahanayake says. “Now with the increasing population, people have started to build on unstable ground. That is how it has become a threat.”

But many people who live under the threat of imminent landslides do not have viable relocation options, and are forced to remain where they are. Government officials say some people also choose not to relocate because it costs too much, or for cultural reasons. 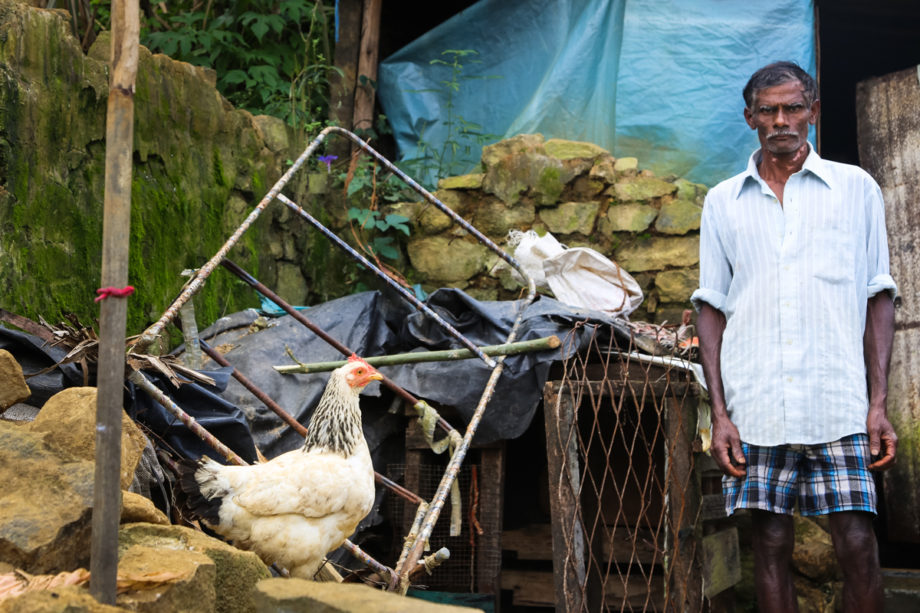 A. Savaariyar, 60, has lived on Kew Estate all his life. His house is continuously damaged by falling rocks during periods of heavy rain.

Landslides can be deadly. An estimated 37 people were killed in a landslide that occurred in October 2014 on a tea estate in the Meeriyabedda area in the mountainous Badulla District. More than 300 people were affected by the slide. The DMC records it as one of the worst landslides in recent times in Sri Lanka, Dahanayake says.

DMC officials who visited the line rooms at Kew Estate in late 2014, warned the people about the dangers of living in the area, says A. Marudhaveeran, 55, a resident and worker at the estate.

A similar landslide warning was issued in 1994 when a large landslide occurred, he says. Sections of a small hill on the estate became unstable resulting in several rockfalls, he says.

Workers on the estate weren’t given relocation options for either occasion, Marudhaveeran says.

“We were temporarily housed in a church and in a fuelwood store at this village,” he says. “After a few days, when things got back to normal, we returned to our line rooms.”

Workers at tea estates face particular danger from landslides. The mountain terrain ideal for tea cultivation is most prone to landslides, Dahanayake says. Housing in those areas is often selected based on land availability, rather than on stability, he says.

The line rooms on Kew Estate were built during the British colonial period more than 100 years ago, according to the estate management office.

Cracks in some walls in the line rooms appeared after the 1994 landslides, and others appeared over time, residents say. Now, almost every wall is scarred with cracks. Water floods into the rooms when it rains.

Savaariyar, 60, the head of a family with 11 members, has lived on Kew Estate all his life.

Each rainy season brings fresh fears of landslides, rockfalls and mudslides, he says. The rainy season once stretched from November to January, but the rainfall patterns have now changed and heavy rains happen several times a year.

Savaariyar says they know what to look out for: When there is continuous rain for many days, and the spring water turns muddy, they know the mud on the mountains is loosening.

“During the start of heavy rain, we move or live temporarily with our relatives until the weather settles back to normal,” he says.

When they return, they often find their houses are damaged by falling rocks and branches, Savaariyar says. 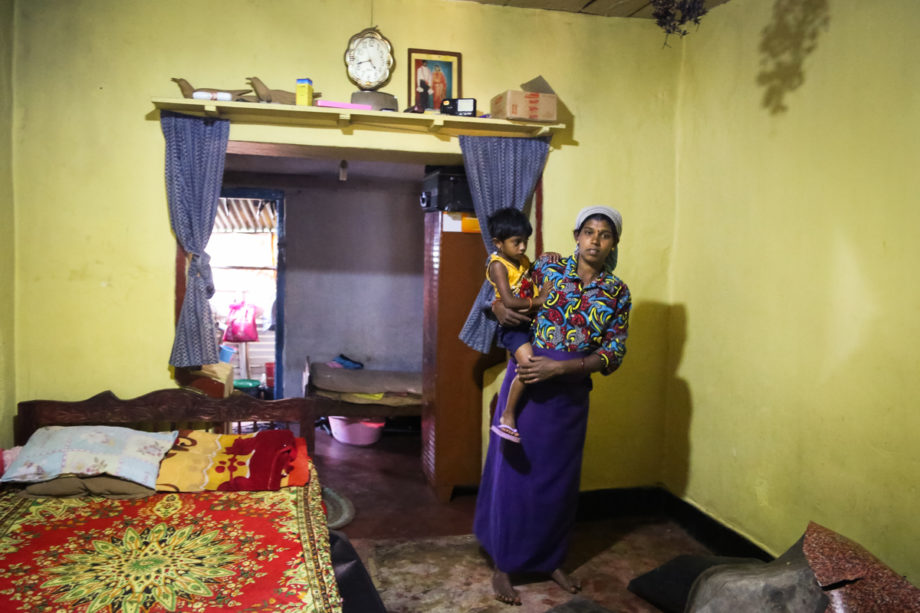 M. Selvi, carrying a child who lives with Selvi’s family, stands inside her father’s home which has severe cracks on the walls and floor. New cracks appear every rainy season, or when there are rockfalls nearby, says her father A. Marudhaveeran.

Arjun Perera, manager of Kew Estate, says the company is aware of the landslide threat and is taking action to relocate people. They have obtained advice from the National Building Research Organization, a government agency that monitors landslides and geological conditions, to identify land suitable for new housing. Land has been earmarked, but building hasn’t begun, Perera says in a phone interview.

But Marudhaveeran and other residents say the earmarked land is not suitable for housing.

“The plantation promised to provide us lands over another hill which also had no roads or passages, which included threats of leopards, so we refused and requested for an alternate solution but nothing happened, and we continue to suffer,” Marudhaveeran says.

A landslide in Digana on Dec. 26, 2014 damaged the houses, shops and fields of 25 families, says Ranaweera, of the DMC. Digana is a village about 17 kilometers (10.56 miles) from Kandy, a major city located in Sri Lanka’s Central Province.

Ranaweera says the first landslide warnings in Digana were given in 2011, and people were encouraged to relocate to government land in Diganathenna, about 3 kilometers (1.86 miles) away. This land is still available for the families to relocate, but instead they have done basic repairs to their damaged houses and continue to live in the area where the landslide occurred.

D. Gnanasiri, 56, runs a roadside shop and restaurant in the area. Both his house and his restaurant were damaged during the landslide, he says.

“The government has given us alternate lands where there are no roads or pathways and no funds to build a new house, so we continued living here,” he says.

The new land is isolated and away from any commercial activity, Gnanasiri says. He lives in his repaired house, but many families have moved out of their houses in fear they will collapse and live in rented houses. They come to farm the fields or manage their shops during the daytime and return to their rented rooms or houses at night, he says.

Ranaweera says there is limited funds available to build the infrastructure requested by the families.

“We have informed and requested the local authority to set a roadway to the provided lands,” he says. But he cannot say when the roads will be built.

Perera says Kew Estate residents are not under immediate threat of landslides. People became scared after hearing of other major landslides in nearby districts, he says.

The mountain on which the line rooms are located is safe at present, he says.

“There are some cracks, but at the moment it stands still and nothing has happened so far,” Perera says.

But Marudhaveeran says he is very anxious about the safety of his family and neighbors on Kew Estate.

“These rocks look highly unstable, and it doesn’t take much for them to slide down and create a huge landslide,” he says. “I think it’s urgent to start the relocating process now.”