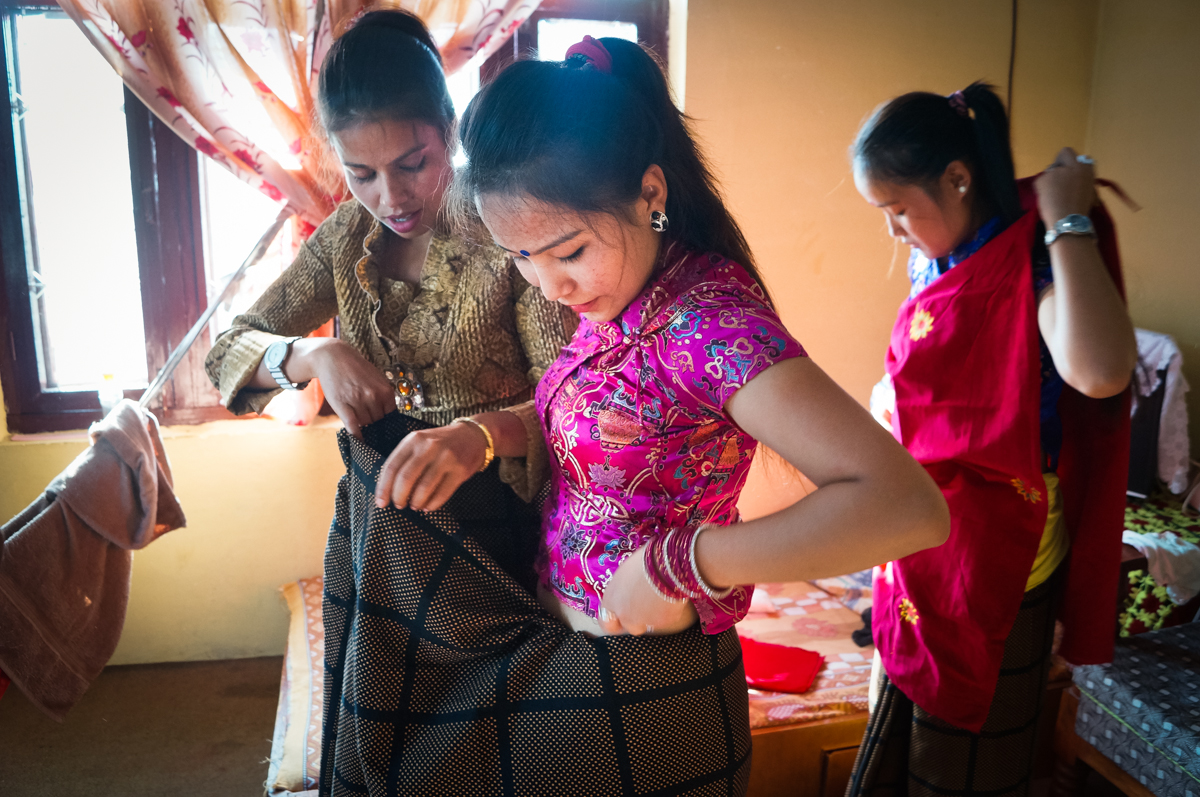 BIRENDRANAGAR, NEPAL – Excited laughter spills out of the small house as Sunita Rana Magar, 19, and a friend don the traditional dress of the Magar, the indigenous group to which the young women belong. The two are going to visit a market with friends in Birendranagar, a city in Nepal’s Mid-Western development region.

Sunita Magar wears a colorful blouse and “lungi,” a long Magar skirt, and then wraps a “patuka,” a bright yellow cloth, around her waist. Over this she wears a red “ghalek,” a long piece of fabric draped across one shoulder and tied at the waist.

Hair ornaments and traditional jewelry – selected from an array of ear and nose ornaments, necklaces made of silver coins or beads, and bangles of glass or gold – complete her Magar outfit.

“I feel very beautiful in this attire,” Sunita Magar says, a grin splitting her face.

“This dress helps me stand out as beautiful in a crowd, and I feel that it separates me from the rest,” Sunita Magar says. “It increases my self-confidence.”

Now she wears Magar attire only when visiting her family in Birendranagar. The rest of the time, while living in an urban area near Kathmandu, Nepal’s capital, and attending secondary school, she dresses in jeans, T-shirts and skirts.

But she hopes to soon start wearing Magar dress for festivals and formal events at her school in Lalitpur, a district adjoining Kathmandu, Magar says.  She still feels shy about wearing Magar attire on her own in Lalitpur.

“For me, wearing a Magar dress is not just for fashion,” Sunita Magar says. “It is a strong way to show my attractive personality.”

Magar women say they are proud to wear their traditional garb in public, and not only for special occasions and festivals, as was the custom in the mid-20th century. Their distinctive attire sets them apart and gives them an indigenous identity while enhancing their appearance and making them look beautiful, the women say.

One of the oldest indigenous groups in Nepal, the Magar trace their history to about 1100 A.D.

The Magar, who make up 7 percent of Nepal’s population, are the nation’s third-largest people group, according to the National Population and Housing Census 2011. Three percent of Nepalese speak the Magar language as their mother tongue.

The garb of Magar women underwent a major change in the mid-1940s, when tailoring became the norm, says Keshar Jung Baral Magar, an adviser to the central committee of the Nepal Magar Association.

Previously, women wore dresses composed of loose pieces of fabric draped over their bodies and tied at the waist, Keshar Jung says. Since tailoring began, seamstresses and manufacturers have retained traditional designs, colors and fabrics.

The custom of wearing Magar attire in public took root in the 1950s, when many Magar families migrated to urban areas as the men went abroad to work military and police jobs, he says.

After moving to the city, Magar women began to wear traditional attire for special occasions and festivals, says Nanda Kali Thapa Magar, chairperson of Nepal Magar Women’s Association in Surkhet, a district in the Mid-Western development region of Nepal. The association, which has branches across Nepal, promotes Magar identity and the preservation of Magar traditions.

“Migration to urban areas inspired people to preserve their ethnic tradition because we Magar women want to make our own identity, even in the urban areas, by wearing the Magar dress,” Nanda Kali says. “Otherwise, nobody can identify us as Magar women.”

In Nepal, Magar identity underwent a resurgence after 1990, when democracy was restored, Keshar Jung says. As democracy led to increased freedom, Magar associations were formed or reorganized.

“Before then, Magar women were not aware of their rights, culture and maintaining the personality,” he says.

Bal Maya Banshi, a housewife in Birendranagar who is Magar, started wearing traditional Magar dress at home soon after she married in 1985.

“I wanted to identify myself as a beautiful and mature Magar woman among the new family members,” she says.

Her husband worked with the Singapore Police Force. They lived in Singapore for 14 years, and then returned to Nepal in 2001, when he retired.

Bal Maya, 41, used to wear Magar garb in Singapore only during festivals and formal Nepalese events. She now wears it regularly when she goes shopping or attends special occasions like weddings and festivals.

“Being a Magar, I feel special, unique and proud because I have a separate dress style than other castes,” she says, referring to the other ethnic groups in the country.

However, some non-Magar women alter the dress, a habit that is unacceptable to the Magar community, Nanda Kali says. From the perspective of older Magars, one of the chief offenses is shortening the lungi.

“Women can use the fashionable designs for other dresses, but they can’t minimize the glory of the Magar dress, which always helps women to build their gentle personality and protect their body parts,” Nanda Kali says.

According to tradition, Magar dress is meant to convey a calm and serene outward appearance, and to protect a woman’s modesty by covering her breasts and the shape of her waist.

Niru Karki, 15, a secondary school student from the Chettri caste in Birendranagar, owns two sets of Magar clothes. She started wearing Magar attire in 2011 in concert with Magar friends.

“My friend always looks cool in Magar dress,” Niru says. “After that, I also started wearing it.”

She wears her Magar attire about eight or nine times a year, mostly at cultural performances or during festivals and celebrations, Niru says. She likes to wear the skirt short.

“There is no rule and regulation to prohibit making the lungi short, so I adjusted it,” she says. “Everyone makes it short, and it looks good, so I also made it short.”

She has many non-Magar friends who also wear Magar dress. They commonly shorten the skirt, Niru says.

“My Magar friends are OK with our short lungi because we are the new generation and we need to look as fancy in Magar dress as other dresses,” she says with a broad smile. “Only older Magar women don’t want us to wear short lungi!”

Gurung sells to many non-Magar girls, some of whom come to his shop with Magar friends. He takes that trend to mean that the larger population desires Magar clothing.

“It shows that non-Magar girls get jealous of their friends when they wear their traditional Magar dress, and they also want to look as pretty as their Magar friends,” he says.

Nanda Kali has five adult daughters, the youngest of whom is 21. All of them have enjoyed wearing traditional Magar dress for festivals and special occasions since childhood.

“I no longer fear that our daughters will lose interest in our traditional clothes and attire because of modernization,” she says.

“The young prefer new designs of their liking,” she says.

She is not worried about these changes because they do not affect the overall design of the Magar dress, Nanda Kali says. And young women continue to wear the yellow hip band, the most distinctive part of the dress.

Sunita Magar and her friend dressed in traditional Magar clothes to visit neighbors during the Tihar festival in October. Tihar, an annual five-day festival that celebrates Hindu gods and goddesses, is known as the Festival of Lights because homes are lit up with lamps and lights as part of the celebration.

Sunita Magar ordered a new type of blouse to wear for the festival. Made of a shiny fabric, it is fashionable and beautiful, and not in the traditional Magar fabric, she says.

“All I am trying to do is make the Magar attire a bit more modern,” she says.

Dressed in their Magar clothes, Sunita Magar and her friend walk proudly and confidently along the dirt road leading to the market in Birendranagar. People watch the two girls, Magar-styled colored threads in their hair swinging behind them as they walk.

“I am proud of being a Magar,” Sunita Magar says. “I feel very happy when I look beautiful in my traditional clothes that were also worn by my forefathers.”

No sources in this article are related to each other.