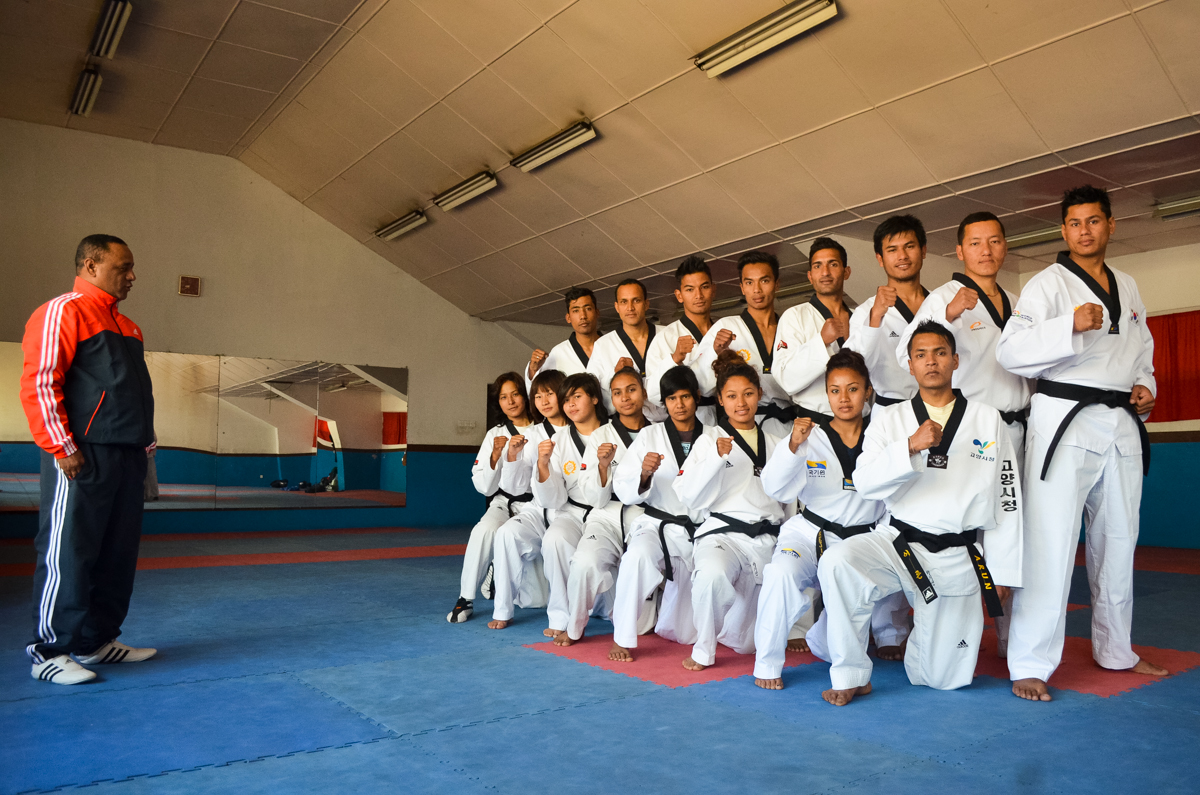 LALITPUR, NEPAL  ̶  Yan Kumari Chaulagain returns to her small rented room in Gwarko, a neighborhood in Lalitpur city, feeling exhausted and sore. It is 10:30 a.m. and she has just completed her daily four-hour taekwondo training session.

She sits on one of the two narrow beds in the room and gazes at the opposite wall, covered with a score of medals, citations and victory photographs marking her achievements. This wall of inspiration helps her to continue in a sport she loves, but which has left her almost destitute, Chaulagain says.

“I have been playing taekwondo since I was 13 years,” says Chaulagain, who takes a break from training only on Saturdays. “So far, I have won 55 matches nationally and internationally. But I have not experienced an easy life yet.”

Chaulagain, 29, was born and raised in Bara district, in the central development region of Nepal. In 2002, teachers who appreciated her interest in sports invited her to learn taekwondo, the Korean martial art that has been an Olympic medal sport since 2000.

Chaulagain, the first girl in her school to learn taekwondo, represented the school at regional tournaments. In 2005, two national taekwondo trainers spotted her potential and invited her to train with the national taekwondo women’s team in Kathmandu, the capital of Nepal.

While training, Chaulagain lived with a relative in Kathmandu. Unable to afford bus fare, she walked to the training center 5 kilometers (3 miles) away. She trained for 10 hours a day, often without food.

Her family thought she was throwing away her future.

“My parents said, ‘Don’t waste your life in this game,’” Chaulagain recalls. “The game is not going to improve your status, so get married like your sisters and have an easy life.”

Later in 2005, the Nepalese Army invited Chaulagain to join its taekwondo team, which consists of both soldiers and civilians. The army gave her access to training facilities and compensated her with 2,000 rupees ($20) and 23 kilograms (50 pounds) of rice every month, she says.

In 2013, the Army offered her a job as a taekwondo trainer at the Bijeshwori Gyan Mandir Sainik Mahavidyalaya, a secondary school in Kathmandu run by the Nepal Army Welfare Fund. She teaches for two hours every afternoon, six days a week. She is paid 19,000 rupees ($190) a month, she says. That’s not enough to live independently in an expensive urban area like Kathmandu.

Now, Chaulagain is stuck, she says. She left school at 16, embracing the opportunity to kick, spin and jump in the taekwondo ring. In taking that path, she gave up her chance to earn a final certificate that could have led to a better-paying job, she says.

“I feel disappointed with myself for not completing my education to do taekwondo,” she says. “If I had studied back then, I would have got a good job and a better life.”

Taekwondo competitors – called players in South Asia – have won international awards for Nepal since the government lifted a ban on martial arts in 1983.

But many people are leaving the sport because they don’t get the government sponsorship and support they feel they deserve. Female athletes face added social and family pressure to leave a sport that is seen as overly aggressive and masculine.

In response, government officials say it is unrealistic to expect the state to financially support all athletes.

New legislation, scheduled to be heard by Nepalese lawmakers this year, could mean more benefits for those who, like Chaulagain, have devoted their lives to their sports.

Taekwondo was introduced to Nepal in 1983, when the Nepalese army and police force began training in the art, says Hemanta Dangi, a trainer at the National Sports Council, an agency of the Ministry of Youth and Sports.

“As taekwondo is related to fighting, the government perceived the game as a medium that could cause fights, and an increase in gangster culture,” Dangi says.

Taekwondo has taken off in Nepal since it was introduced to civilians. It has become especially popular with young people, Dangi says.

The National Sports Council helped boost the sport when it decided in 1988 to invest in taekwondo. Thanks to that investment, taekwondo is now taught at 552 sites in 60 districts in Nepal, including schools, community centers and private training centers.

There are more than 4,000 national-level taekwondo players in Nepal, says Kamal Prasad Khanal, chief of the council’s Sports Tournament and Planning Department.

Although they grew up in a society in which girls and women are sometimes discouraged from engaging in sports, those women have brought Nepal international recognition.

In 1998, Sabita Rajbhandari won a silver medal at the 13th Asian Games in Thailand; that was the highest honor a Nepalese athlete has won to date.

In 2004, taekwondo player Sangina Vaidya qualified to compete for Nepal at the Olympic Games in Athens. She is now one of just four female taekwondo trainers in Nepal.

Vaidya, who works for the National Sports Council, believes the athletes don’t get enough government support.

“The achievements made by the players so far in international arena is solely based on their individual efforts,” she says.

Many Nepalese youngsters take up taekwondo every year, but 50 to 60 percent of them drop out after five or six years of training, he says, judging by his observations at state-run training centers.Gobinda Sharma, a national-level trainer and official of the Nepal Taekwondo Association, agrees.

Players are deserting the game because they cannot find financial security, Dangi says.

Because international taekwondo titles bring prestige to the country, the government has a responsibility to support its competitors, Chaulagain says.

“A sport is the medium through which a country is recognized all over the world,” she says. “A player spends his or her life for the sake of the country; therefore it’s important for the country to provide basic services to the players.”

“It is the responsibility of the government to provide basic amenities to the players who spend their lives to increase the prestige of their countries,” says Deep Raj Gurung, general secretary of the Nepal Taekwondo Association.

Taekwondo competitors often apply to work as coaches for the National Sports Council, Dangi says. They also try to land other government jobs.

But that strategy often fails.

“The players who have good relations with politicians are more likely to get jobs and services,” Gurung says. “There is a trend of offering jobs to players who are near and dear to the officials. Therefore, other players are discouraged.”

Government officials say it is unrealistic to expect the state to financially support all competitive athletes.

“The government cannot provide high-level services to the players based on a single medal they win,” Khanal says. “The government sends the players for international training and provides jobs once they retire from the game. Therefore, accusing the government of not doing anything is unfair.”

He acknowledges the Nepalese players do not have the same benefits as international players, such as housing, financial support, and access to training and equipment.

Only one or two Nepalese taekwondo competitors have been sent abroad to train for foreign competition, Chaulagain says.

Players and trainers hope changes to the law will mean more support for athletes.

The existing Sports Development Act, approved in 1992, isn’t relevant to today’s needs, Khanal says. The act focuses on introducing and developing sports; it makes no provisions for athletes.

The National Sports Policy, created in 2011, is more focused on the welfare of players.

Under the policy, the government is to provide national-level athletes with basic amenities, health insurance and jobs after they retire from their sports.

That policy can’t be implemented unless the Sports Development Act is changed, Khanal says.

The Ministry of Youth and Sports is drafting amendments to the act, Khanal says. It will present the draft amendments to lawmakers in July 2015.

In addition to the provision of jobs for athletes, the proposed amendments would decrease the politicization of sports, he says. The amendments also aim to raise awareness of sports across the country.

“The government cannot provide money to everyone,” Khanal says. “Instead of allocating money for each player, the new policy aims to uplift the lifestyle of national-level players by providing them job opportunities.”

Chaulagain continues to hope that her sacrifices for taekwondo will be recognized and rewarded with a better-paying job.

“Until now, I have played for my country,” she says. “My walls are covered with the medals I have won. But these medals do not give me food. I am very confused about my future.”