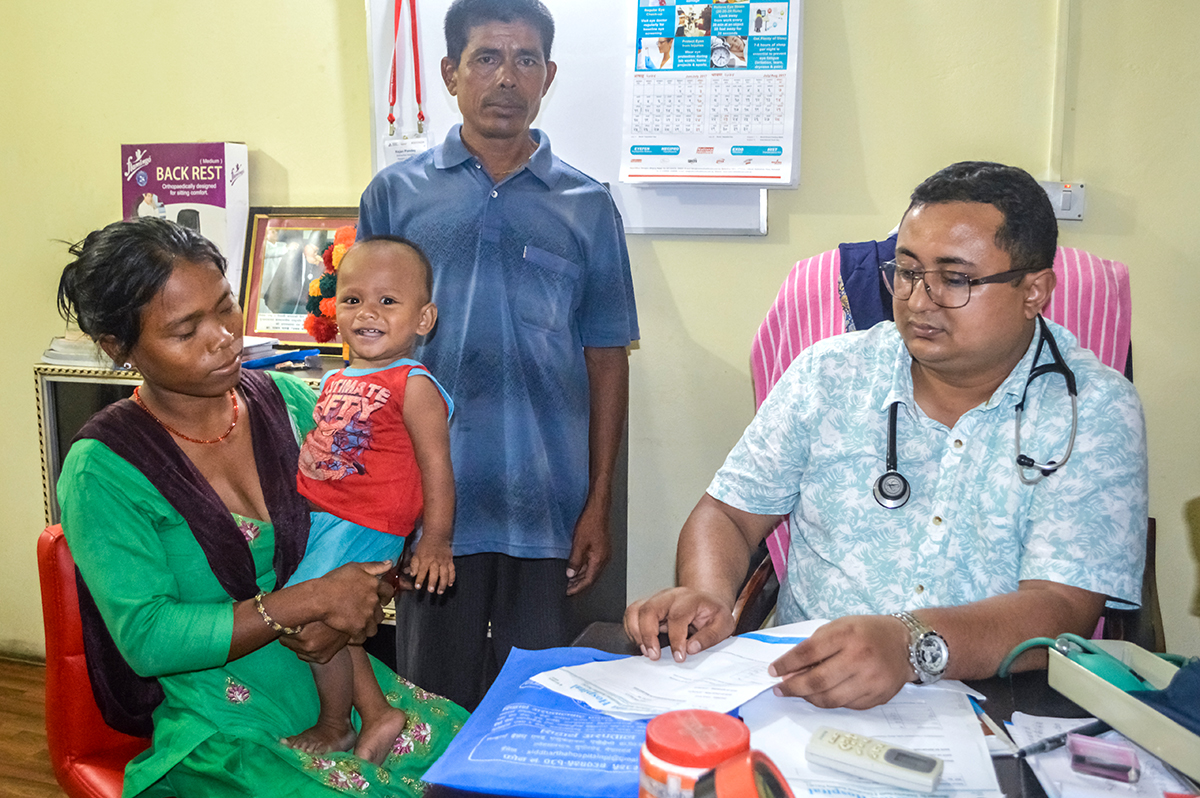 But Chaudhary, 21, who is thin with a fair complexion, says he has suffered from frequent aches in his chest, knees and other joints since he was 16.

When he could no longer bear the pain, Chaudhary says, he went to a hospital in Nepalgunj, a city on the Terai plains close to the border with India.

A physician prescribed pantoprazole, a medication to control extreme heartburn, he says.

But his symptoms persisted.

Two months later, after experiencing new pains in his knees and elbows, he visited an orthopedist.

That doctor couldn’t offer a diagnosis and simply suggested that he refrain from lifting heavy objects, Chaudhary says.

With his pain worsening and no concrete diagnosis, he decided to travel to Lucknow, India, in search of another specialist. This time, the doctor suggested he had a uric acid problem and prescribed a new round of medication.

But that didn’t work either.

The pain continued, and his legs were swelling, too. Other doctors diagnosed jaundice and arthritis.

“The medicine of any disease that I took did not relieve the pain,” Chaudhary says. “Rather, the pain became more severe. I went to many hospitals for this problem. All doctors did various tests on me. But nobody diagnosed the real disease.”

Finally, in 2015, back in Nepalgunj, Dr. Rajan Pandey, a physician at Bheri Zonal Hospital, performed a hemoglobin electrophoresis, a test that measures the different types of the protein in red blood cells, which carry oxygen to the body’s tissues.

Chaudhary’s test results were abnormal, and Pandey told him that there were various genetic mutations that can cause hemoglobin to be formed incorrectly. The doctor began exploring the possibility that Chaudhary was suffering from sickle cell anemia, also called sickle cell disease. Symptoms of the disease include pain in the chest, back, arms or legs, swelling in the hands and feet and excessive fatigue.

“I was shocked when I knew that I was suffering from this disease,” Chaudhary says. 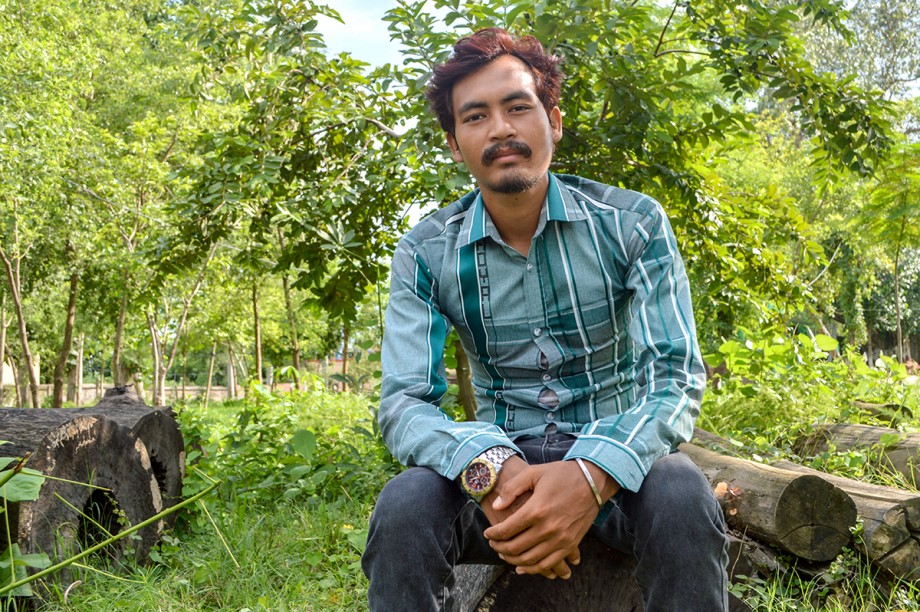 Ajit Chaudhary’s sickle cell disease was misdiagnosed for years. After the government made diagnosis and treatment of the disease a priority, he received a correct diagnosis. But his access to ongoing treatment remains limited.

Sickle cell anemia is a genetic disease that causes red blood cells, typically shaped like discs, to take on an abnormal crescent shape. The disease causes red blood cells to become sticky and rigid, making them more prone to getting trapped in small blood vessels, which in turn prevents them from reaching different parts of the body and causes pain, Pandey says.

Sickle cell anemia is a recessive condition, meaning a person must have two copies of the gene to have the disease.

Pandey says the symptoms that Chaudhary showed are not unusual. (Chaudhary is a common last name among the Tharu people.) Tharus, a group indigenous to Nepal’s Terai region, are prone to sickle cell disease, Pandey says. That’s how he knew what to test for when he met Chaudhary.

Tharus are seven times less likely to contract malaria than other Nepalese people, but more prone to sickle cell disease, confirms Dr. Bikas Devkota, a director at the Department of Health Services in Nepal.

As the number of sickle cell diagnoses continues to rise in rural parts of the country inhabited by the Tharu people, the Nepali government is training local doctors and nurses to staff health camps in 22 of the nation’s 75 districts. In the camps, staff members offer free blood tests and treatment options. Once patients are diagnosed, the health camps issue cards identifying them as having sickle cell disease. Patients can present their identity cards at hospitals and pharmacies to receive free medication.

The Ministry of Health estimates that 2,000 Tharu people have sickle cell anemia throughout the country, with heavy prevalence in the midwestern and farwestern regions of the nation, where more than 1,300 people have been diagnosed since 2011. According to the 2011 census, there are 1.74 million Tharus in Nepal.

Locals say the prevalence of the disease has grown among the Tharu people because custom requires that they marry within their tribe, and sickle cell disease is a recessive trait that requires both parents to carry the gene.

The first sickle cell patient was identified in Nepal in 2003, Pandey says. By 2014, the Constituent Assembly took up the issue of sickle cell disease, recognizing it as a health crisis in the nation and declaring the disease a public health problem.

Before 2014, Pandey says, the disease was considered rare and often misdiagnosed as arthritis or jaundice, as in Chaudhary’s case. Over the last two years, Nepal has also worked to be able to treat the disease in the country, without having to send blood samples to India for diagnosis, as was the case not long ago. Today, blood can be tested for sickle cell disease in 12 locations throughout the nation. 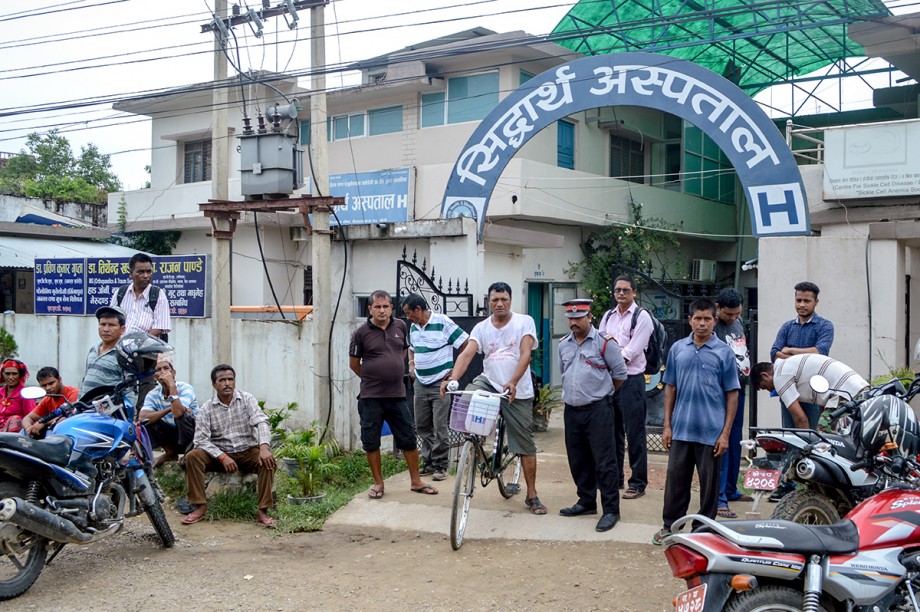 Patients wait for Dr. Rajan Pandey outside of the hospital in Nepalgunj, a city with a high prevalence of sickle cell anemia because of its large population of Tharu people, who are prone to the disease.

Chaudhary says it is a relief to have a correct diagnosis after so many years. But the Bardiya district hospital near where he lives doesn’t have the facilities for sickle cell treatment. He doesn’t yet have an identity card, so for now, he has to travel three hours to the Nepal-India border to purchase his medication.

On Pandey’s advice, he not only takes medication but also has added supplements of folic acid and has modified his diet to include meat, nuts and grains, Chaudhary says. The combination has reduced the severity of the pain but has caused a financial burden.

He is not alone. In other districts of the country, many people have been diagnosed with sickle cell disease but lack the identity cards to obtain the medication that they need.

Prabhu Chaudhary, general secretary of SCAS-Nepal, says it has diagnosed 70 sickle cell patients in three areas where Tharus live. But because the Bardiya district still lacks facilities, he refers patients to Bheri Zonal Hospital, near the Indian border, for further treatment. A total of 1,300 sickle cell patients have received treatment from Bheri hospital since 2011, according to the institution’s records.

Devkota, of the Department of Health Services, says one new patient is diagnosed at Bheri hospital every day, and five to 10 patients visit the hospital for follow-up treatment each day.

Nistha Dahit, 17, who is from the Bardiya district, says her father has been taking her to India since she was 9 to receive treatment for the pain from sickle cell disease.

She says she often falls unconscious because of severe pain in her hands and feet and stomach. 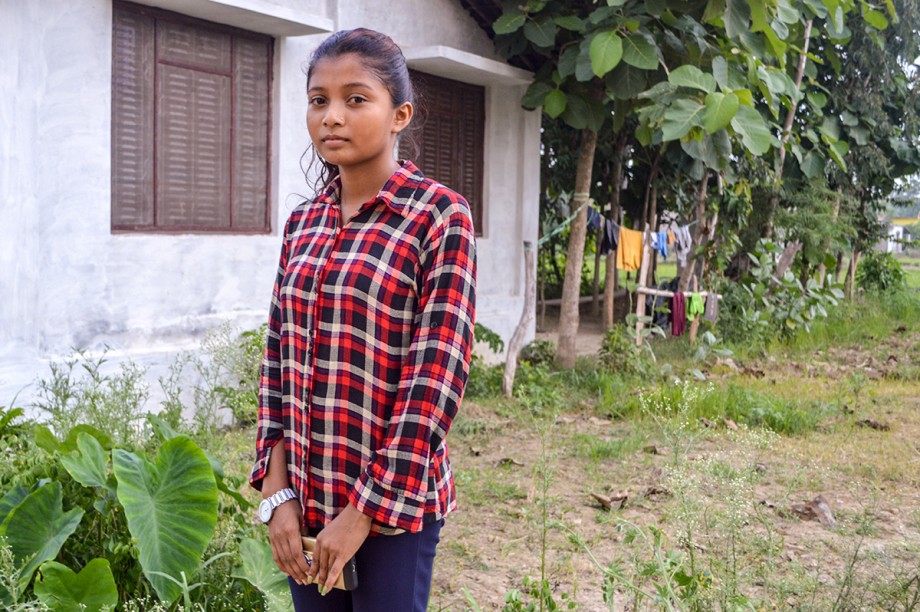 Nistha Dahit, 17, now has a sickle cell identification card that entitles her to free government care.

“The pain becomes less severe only after I take medicine,”Nistha says.

Her father, who earns just 8,000 rupees ($78.11) per month as an office assistant, says he is in debt from buying medication to treat his daughter’s pain.

Until one year ago, her family was receiving no assistance. Today, she is treated at Bheri hospital, thanks to her sickle cell identity card.

“The money that the government provided for the treatment has eased the burden for my father,” she says.

Pandey says he is committed to finding a permanent solution to address sickle cell disease among the Tharu people.

“For this, the blood of each member of Tharu community should be tested,” he says.