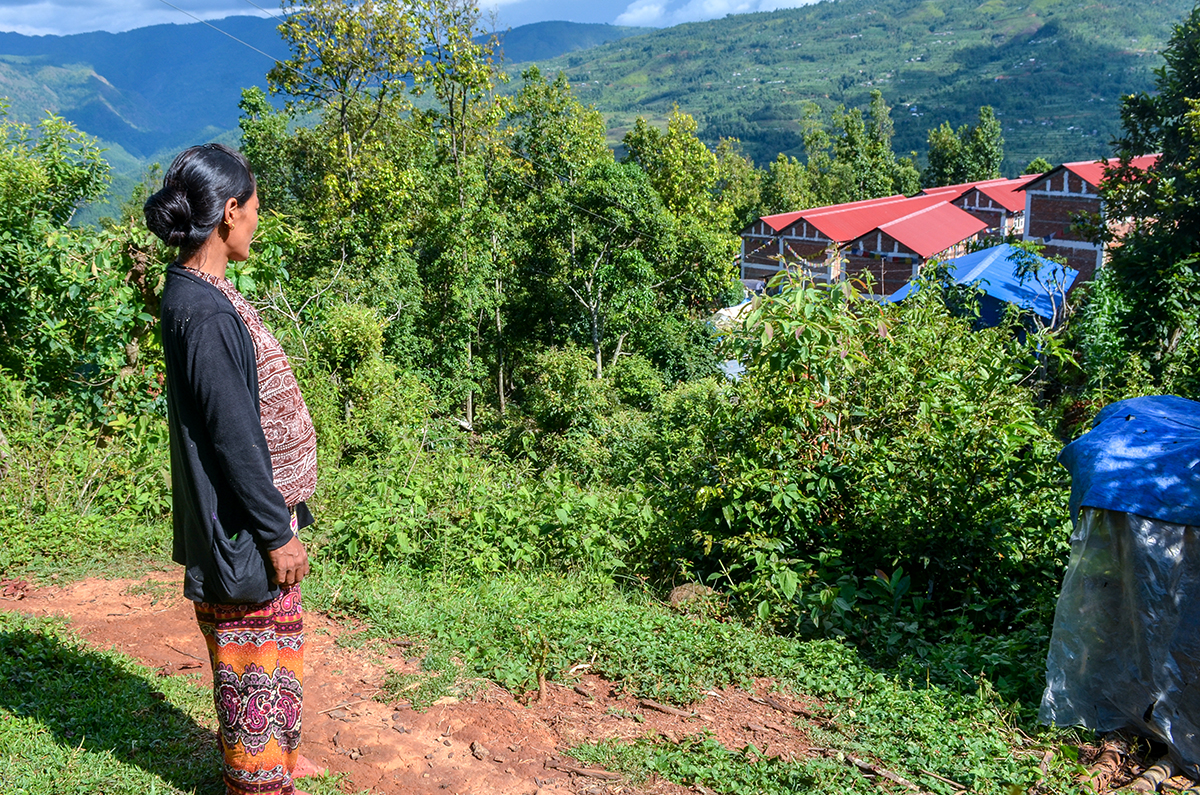 DHOLA, NEPAL — Nearly everywhere in this mountainous country, there are visible signs of an earthquake that happened more than two years ago: buckled roads, homes that are half-rubble, tents that are the living quarters of entire families.

Everywhere but here in Dhola, near the epicenter of the 7.8-magnitude quake.

Here, 55 new homes, situated in two clusters, are lined up in neat rows, each flanked with a set of tidy concrete steps and capped with a shiny red roof.

The whole community is governed by a set of rules posted on the golden gate at the entrance: No violence. No alcohol. No drugs or tobacco. No stealing, lying or using vulgar words.

Just beyond the sign is a brand-new stupa, a colorful structure that is a key place of meditation for many Nepalese Buddhists.

“It feels like we are in heaven,” says Kamishang Tamang, a 74-year-old Dhola resident lounging on her veranda with friends. 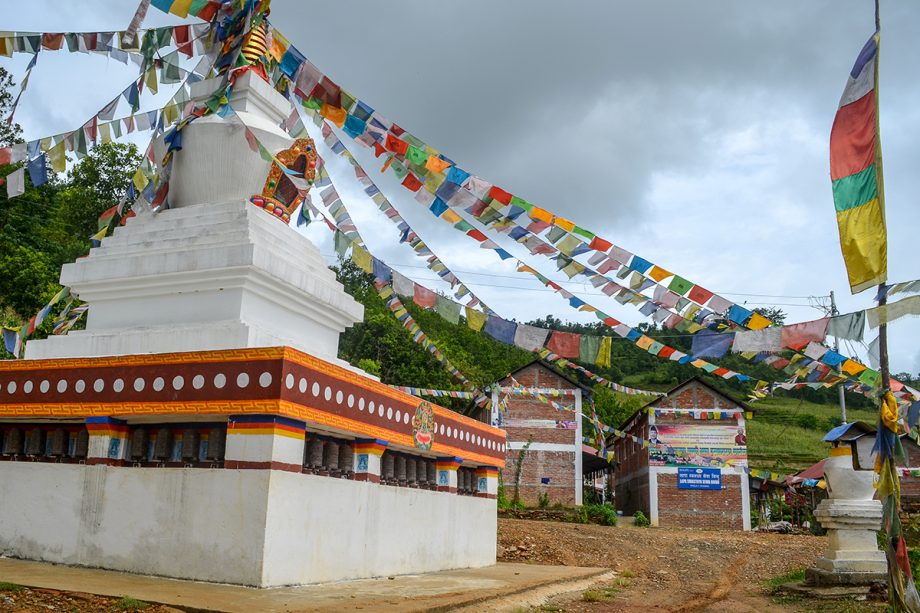 A colorfully decorated stupa sits prominently in the new community built in Dhola, in Nepal’s Dhading district. The community’s residents built the place of meditation, along with their own homes, after the 2015 earthquake destroyed their village.

The people of Dhola credit the rebirth of their village to one of their own: 36-year-old Dinesh Tamang, who singlehandedly secured plots of land for the homes, collected enough money to build the town, convinced everyone to relocate and managed the community-wide construction effort. (Tamang is a common surname in the village. Dinesh Tamang is not directly related to others quoted in this story.)

The 55 families, including Tamang and his family, are originally from the villages of Lapa and Kapur, in the isolated Ruby Valley highlands. When the earthquake came on April 25, 2015, the death and destruction were such that people described their weeping as unending.

After the quake came the landslides.

The cracked, crumbling remains of the villagers’ homes began to slip down the mountain slopes. More people died. Those who survived were desperate.

Tamang had left home to study to be a health assistant and was in Sindhupalchok district on a field study at the time of the quake. He was outside when it happened, and he watched everything collapse, he says.

Two friends died on the spot, Tamang says. Another was disabled. Some were buried under the debris, and Tamang did what he could to rescue them and transport them to a hospital.

“There was a feeling in me that I survived to do something and I must do something,” he says. 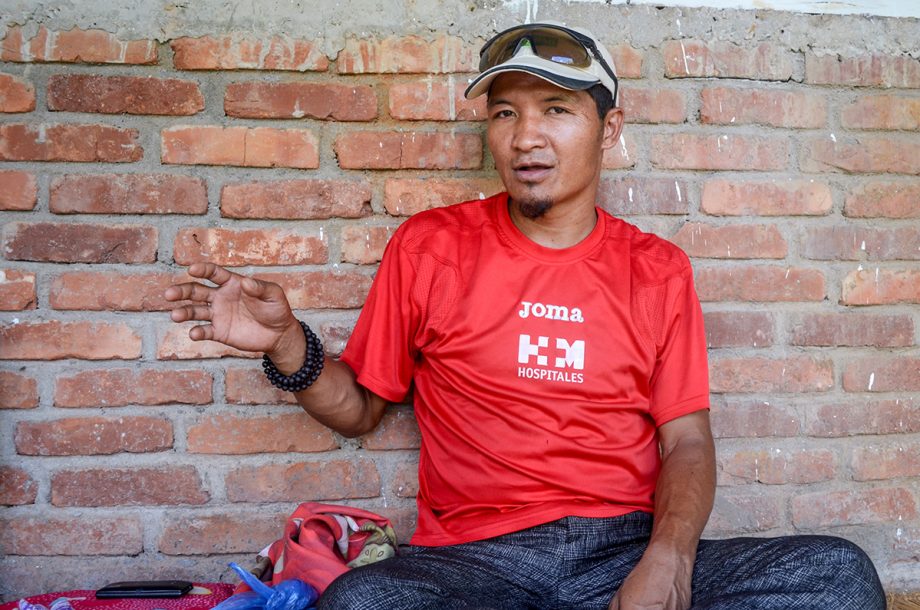 Dinesh Tamang relaxes in Dhola, in Nepal’s Dhading district, where he led an effort to build 55 new homes for families, including his own, who lost their houses in the 2015 earthquake.

Tamang returned to Ruby Valley and found what was left of his home.

“Children, elders and everybody started pleading for help,” he says.

Tamang got to work. He reached out to people in Nepal and all over the world and asked for money. Any amount helps, he told them. Donors included local Buddhist temples, religious leaders and Canada-based organization Child Haven International.

Soon, he’d collected enough money from donors – international and local – to buy 21 ropani (about 2.6 acres) of land in Dhola. The families from Lapa and Kapur pitched tents there and agreed to follow Tamang’s key rule during the building period: Everybody works together.

Tamang’s plan worked. The families labored for months, often playing music to spur them on until late into the night. Everyone contributed what they had, whether it was masonry skills, brute strength or by playing supporting roles, like preparing food or managing the bottles of water that Tamang convinced donors to give.

By March 2017, all the homes were built. Everyone moved in to the new community together.

And today, everyone is happy.

“I had not even imagined that I will live in a permanent house with my family,” says Sonimaya Tamang, who lives in a new home with her family. 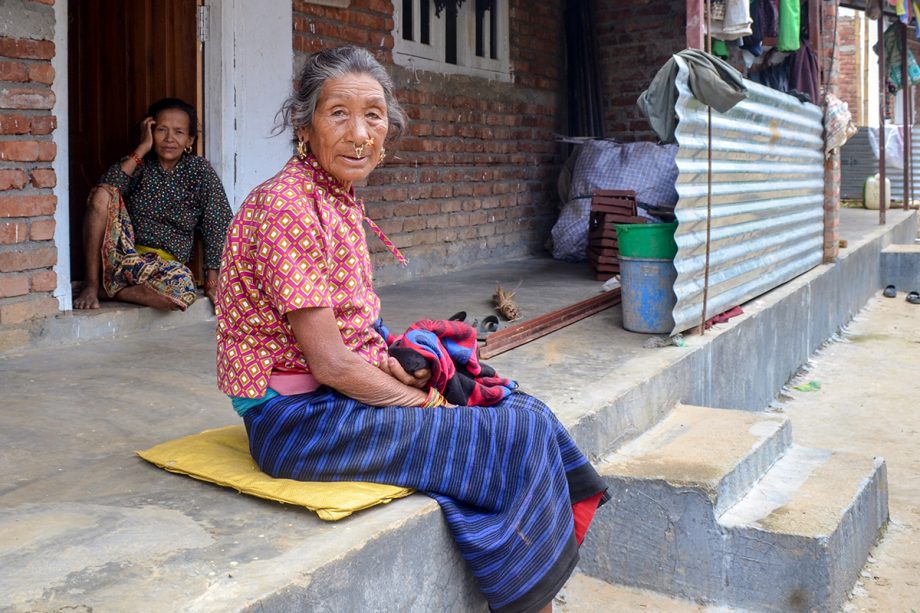 Kamishang Tamang, 74, in red shirt, relaxes on the veranda of a home built in Dhola, in Nepal’s Dhading district. Gyalmo Tamang, 50, is shown in background.

Some reconstruction officials, who have seen national efforts falter, view the success at Dhola with envy. Hundreds of thousands of families around the country are still struggling to rebuild their homes. The government hasn’t been able to adequately assist those families, either by providing technical building needs or getting grant money to families who were promised it.

By any measure, and especially in comparison to the reconstruction challenges around the country, Dinesh Tamang’s work is exemplary, says Rabi Chandra Panjiyar, coordinator of the National Reconstruction Authority for Dhading district, where Dhola is located.

“We can learn a big lesson from the work of Dinesh,” Panjiyar says.

Now, Tamang hopes to help other villages. He aims to buy 32 ropani (just over 4 acres) in another area of Dhading district and build 100 homes there.

“I will build houses quickly if everybody helps me,” he says.