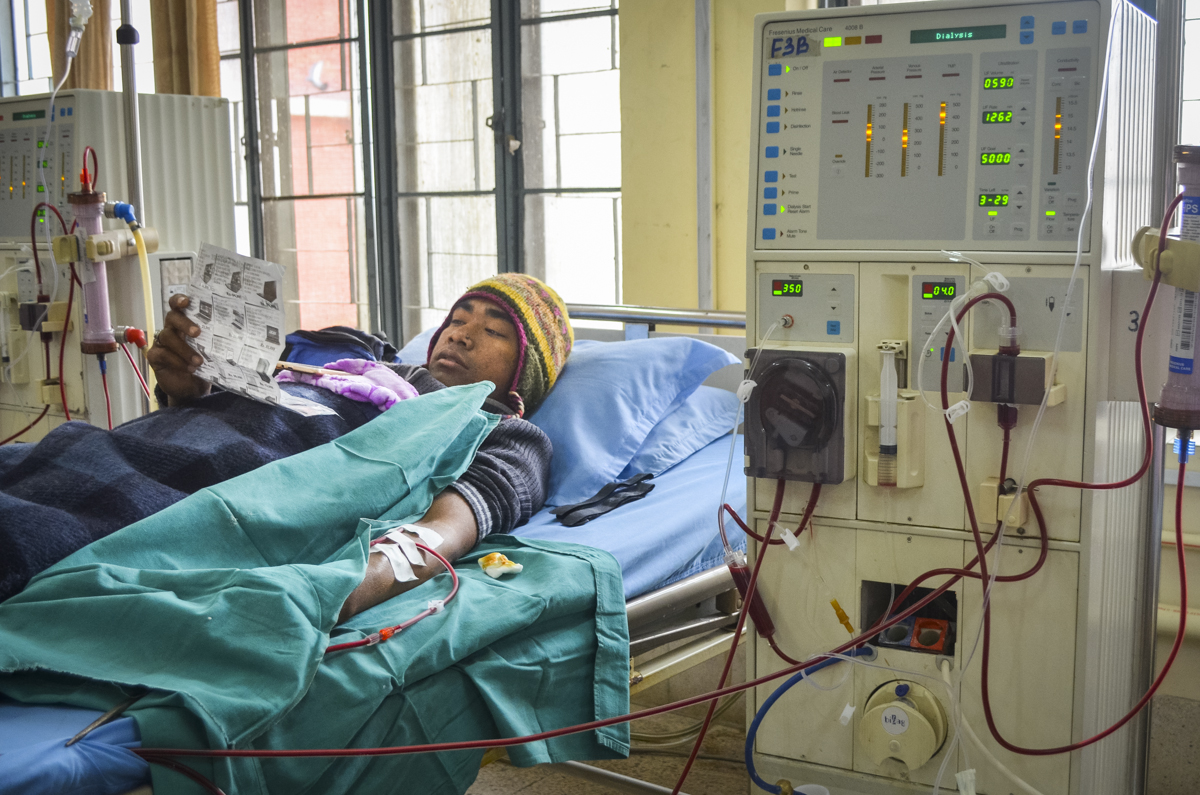 RAMECHHAP DISTRICT, NEPAL  ̶  Bishnu Bahadur Shrestha didn’t know he had kidney disease until one of his kidneys completely failed and the second was barely functioning.

In fact, the 38-year-old farmer from Bhirpani village area in Ramechhap district, says he didn’t even know about kidney disease, including that it hinders the ability of one’s body to filter waste, or that a poor diet can contribute to it.

Prior to his diagnosis, Shrestha says he went to a health post in his village in 2013 to get treatment for a spate of headaches. He was diagnosed with hypertension, but the medication didn’t bring any relief, he says.

INSIDE THE STORY: A reporter’s experience gives her an idea for an important story, but remaining impartial is difficult when she’s writing about something that deeply impacts her own family.

He was referred to Shahid Gangalal National Heart Centre in Kathmandu, Nepal’s capital, but doctors there couldn’t diagnose his condition. They referred him to Tribhuvan University Teaching Hospital, also in Kathmandu, where he was told he had near-acute kidney disease.

“I was shocked when the doctor at the teaching hospital told me suddenly that my kidneys have failed to work and I have to do dialysis for the treatment,” Shrestha says. “I have never imagined that I will suffer from such a serious disease.” 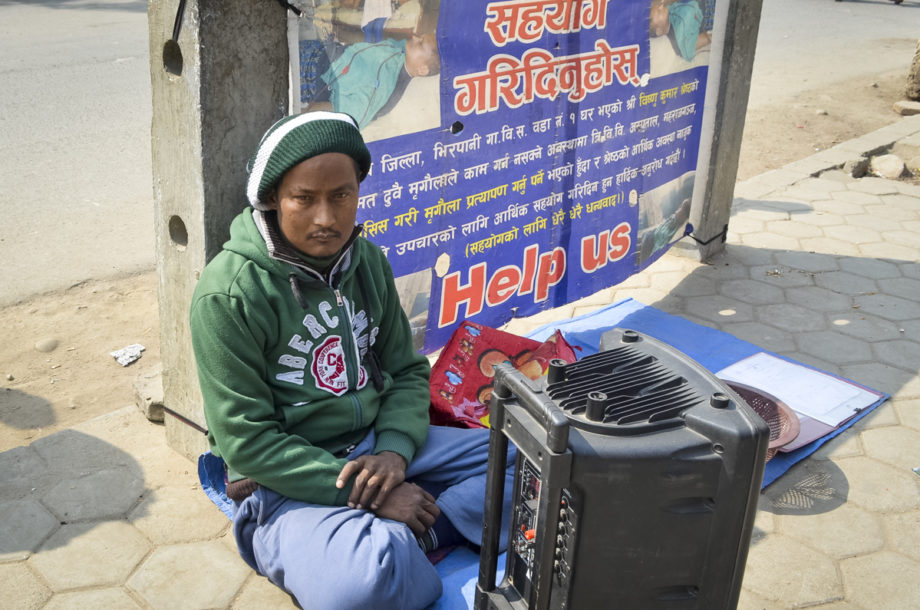 Bishnu Bahadur Shrestha, 38, was diagnosed with kidney failure in 2013 and receives dialysis treatment twice a week at Tribhuvan University Teaching Hospital in Kathmandu. Since he has completed the free dialysis treatment provided by the government, he begs at various locations in Kathmandu to pay for his monthly treatments.

Doctors and health advocates say kidney disease is on the rise in Nepal. Their evidence is anecdotal, as there’s been no national research on the disease. For most patients, one or both kidneys fail before they seek treatment, the experts say. Those people are forced to undergo dialysis, a treatment that supports kidney function, several times each week and, in many cases, wait for a kidney transplant.

But a proposed change to a law governing organ donations has given patients renewed hope. In January, lawmakers approved an amendment to the Human Body Organ Transplantation (Regulation and Prohibition) Act 1998 that would widen the pool of relatives who can qualify to donate organs.

The amendment would also allow organ donations from patients who are declared brain dead, without paperwork delays that render the organs unusable.

The government of Nepal, which pays for treatment for some low-income kidney patients for up to two years, provided treatments to 2,660 kidney patients between July 2013 and July 2014, according to the Annual Report of the Department of Health Services.

This is very dangerous disease. The patient is alive only until he or she has money. Dr. Pukar Chandra Shrestha, a transplant surgeon and executive director of the Human Organ Transplant Center

Dr. Shakti Basnet, founder and president of Nepal Kidney Foundation, says there are around 30,000 people with kidney-related problems. About 3,000 new patients are added to that list each year, he says. The foundation’s data is based on informal surveys and interactions with nephrologists and other healthcare providers.

The government’s program that provides treatment to some patients with total kidney failure includes 208 dialysis treatments over the two-year period, Acharya says. Each treatment costs the government 2,500 rupees ($23.48).

Many Nepalese who suffer from kidney disease don’t even know about their own illness, Basnet says. 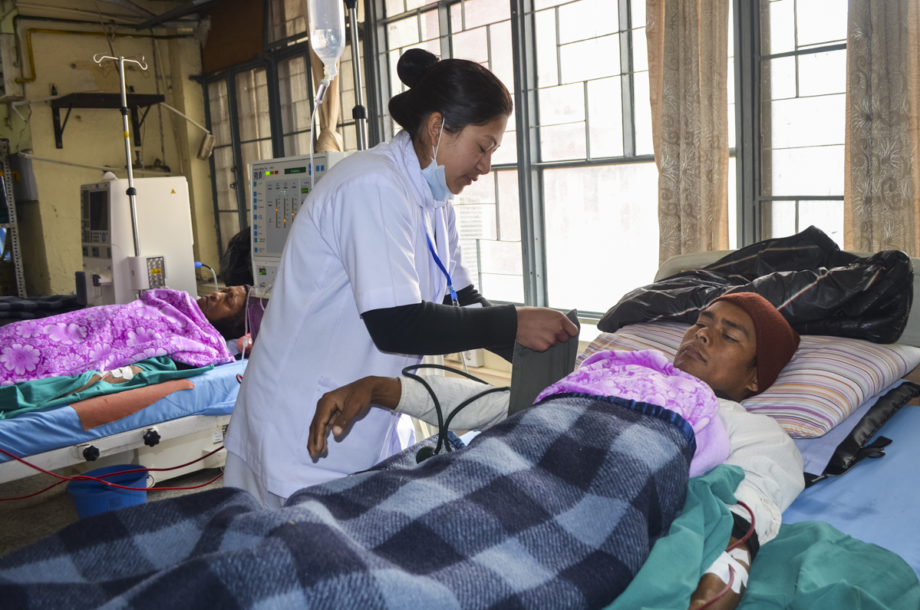 Ramila Dangol, 21, a nurse, measures the blood pressure of Badri Bahadur Bhandari, 32, during a dialysis treatment at Bir Hospital in Kathmandu. Bhandari’s two brothers have already died of kidney disease, and his family moved to Kathmandu to ensure Bhandari receives regular dialysis treatment.

The foundation, in partnership with DaVita Village Trust, held a chronic kidney disease screening camp over a five-day period in five Kathmandu Valley locations in late 2015. Of the 2,282 adults and children screened, 10 percent were diagnosed with symptoms that indicated possible kidney disease. Follow-up blood tests showed that 7 percent of them had chronic kidney disease.

“The study carried out among a small number of people found such a big number of kidney patients,” Basnet says. “This finding gives a dangerous signal of kidney disease in Nepal.”

But those aren’t the only causes.

The rising use of pesticides and chemicals in agricultural products, consumption of junk food and a drop in eating fresh and green vegetables can also lead to health problems which may gradually affect the kidneys, he says.

Even those who have lost family members to the disease are often unaware of its causes.

There is nothing left to do now for money to live, except to sit in the street and beg. Bishnu Bahadur Shrestha, a kidney patient

Bishnu Kumari Bhandari says her oldest and youngest sons died of chronic kidney disease. Now, her second son and son-in-law are being treated for kidney failure.

Badri Bahadur Bhandari, her son, says people in his farming village in the Morang district, about 549 kilometers (341 miles) from Kathmandu, believe that the deaths were fated by the gods.

Acharya, the director in the government’s health services department, says there are 39 medical facilities in Nepal that provide dialysis service. Of this number, two dozen are outside the Kathmandu Valley.

The 15 facilities within Kathmandu Valley include four state-run hospitals. The others are private hospitals and nongovernmental agencies, Acharya says.

Most dialysis patients must live in or relocate to the Kathmandu Valley area to get treatment, he says.

Bishnu Bahadur Shrestha says he rarely left his village until he was diagnosed with kidney failure. Since his diagnosis in mid-2013, he sold his house and farmland to finance his medical treatment. Now, he lives in a rented room in Kathmandu.

“I can neither die, nor does the disease allow me to live happily,” he says. 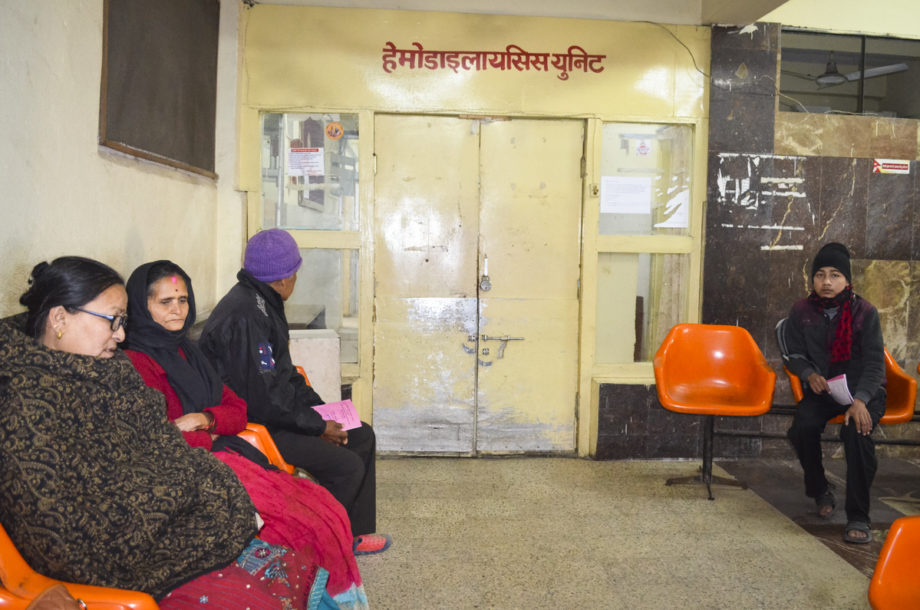 Family members of kidney patients wait outside the Hemodialysis Unit at Bir Hospital. Many families from rural areas have been forced to relocate to Kathmandu to be close to the hospital so their loved ones can access dialysis treatments.

Badri Bahadur Bhandari, Bishnu Kumari Bhandari’s son, says he, too, has sold everything he can to pay for his treatment. He says he’s spent more than 3 million rupees ($28,175) for his medical costs since 2006. He lives with his parents and six-year-old son in two rented rooms in Kathmandu, for which they pay 8,000 rupees ($75) a month, he says. The family also spends about 10,000 rupees ($94) a month on food.

Badri Bahadur Bhandari says his wife went to Saudi Arabia to work as an office cleaner in January to earn money. His parents sometimes beg at temples. His mother spends most of her time visiting neighbors, shops and schools to raise money for his treatment, he says. She raises about 20,000 rupees ($188) in donations every month, and if he is able to join her, he raises an additional 10,000 rupees ($94) a month. This is the only income they have for his medical expenses and their living costs.

Pukar Chandra Shrestha, the transplant surgeon, says treatment isn’t as expensive when kidney disease is diagnosed early. In that case, he says, some patients can be cured within months, and for as little as 10,000 rupees ($94).

Bishnu Bahadur Shrestha says he would have controlled his alcohol intake and paid attention to his diet had he known his lifestyle placed him at risk of serious disease.

“I would not have to face this situation if I knew earlier that my kidneys will fail,” he says.

He says he is in despair about how to cover the expenses of his treatment. He knows about the proposed law, but he doesn’t think he’ll benefit from it. He wouldn’t be able to afford a kidney transplant even if he had a donor, he says.

“There is nothing left to do now for money to live, except to sit in the street and beg,” he says.

Bishnu Bahadur Shrestha and Pukar Chandra Shrestha are not related.