Skip to main content
The story you are reading was published on Saturday August 27, 2016. To read more recent stories click here. 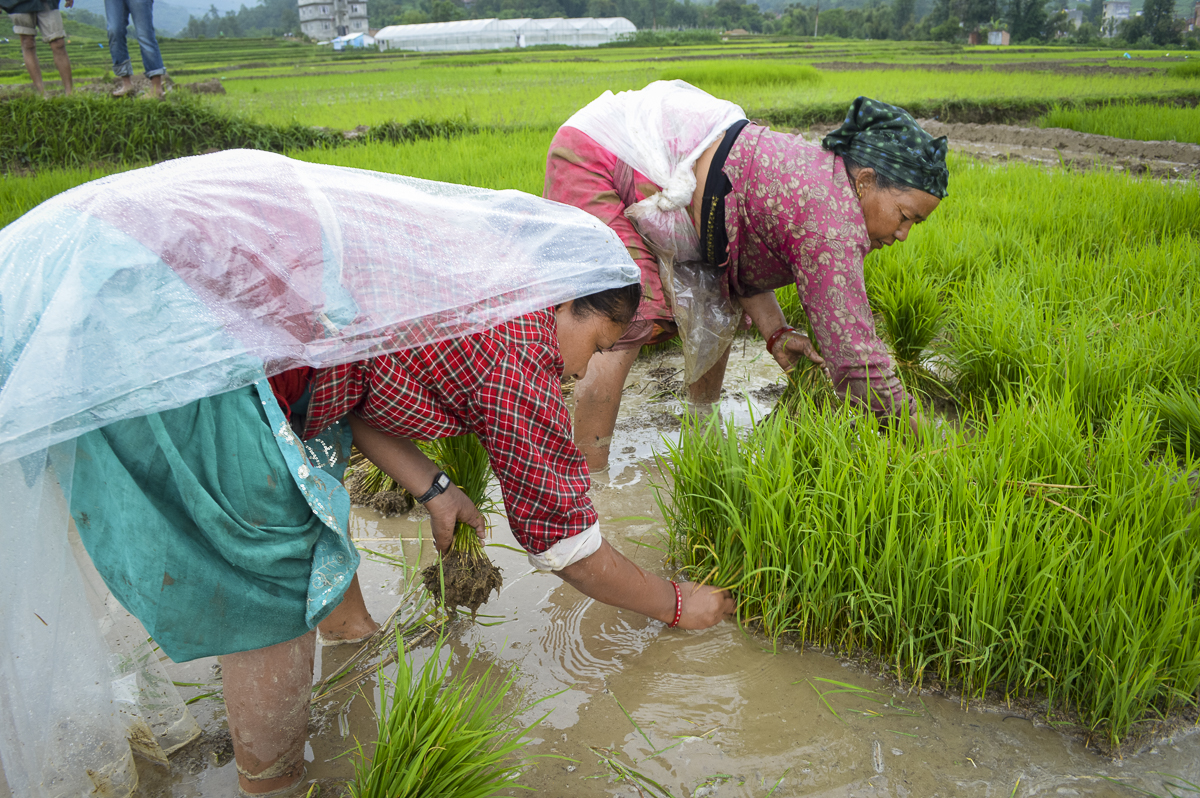 BHAKTAPUR DISTRICT, NEPAL — It was the first day for planting rice seedlings and an open-air celebration in Kautunje, a large village of around 20,000 people, was underway.

Farmers had for weeks plowed the land and prepared the seedlings. When it came time to plant, each small seedling was pressed into the tilled earth by hand, one plant at a time.

“This year was the first real planting of rice after the earthquake,” says Shanti Thapa, referring to the earthquake in Nepal in April 2015 that destroyed her home and hundreds of others in the village.

The agriculture sector in Nepal suffered massive losses due to the earthquake, according to a government report that assessed the impact of the disaster. The sector suffered losses of around 28.3 billion Nepalese rupees ($264.9 million), according to the same report.

Almost two-thirds of Nepal’s population was engaged in agricultural activities in the 2012-2013 fiscal year, according to the Ministry of Agricultural Development, the latest year for which data has been released.

The production of rice in the planting season immediately after the earthquake, dropped by 22 percent, according to the ministry. Corn production fell by 20 percent in the same period.

Yogendra Kumar Karki, spokesperson for the Ministry of Agricultural Development, says the ministry has observed an increase of rice farming, from 42 percent of available land farmed last rice planting season, to 53 percent of land being planted in the current season. The ministry  estimates  5 million metric tons (5.5 million short tons) of rice will be produced this year, he says.

For farmers like Thapa, the recovery process has been slow and arduous.

Thapa, 40, says her family, which includes two grown children, lost all its seed crops when their house, made of mud and wood, collapsed in the earthquake.

Before the earthquake, the family harvested about 18 muri (1,080 kilograms or 2,381 pounds) of rice every season, Thapa says. They sold some of the rice for income, as well as seasonal vegetables family members grew between rice seasons.

Rice farming occurs once a year, and is based on monsoon rains. The planting season is from April to August. 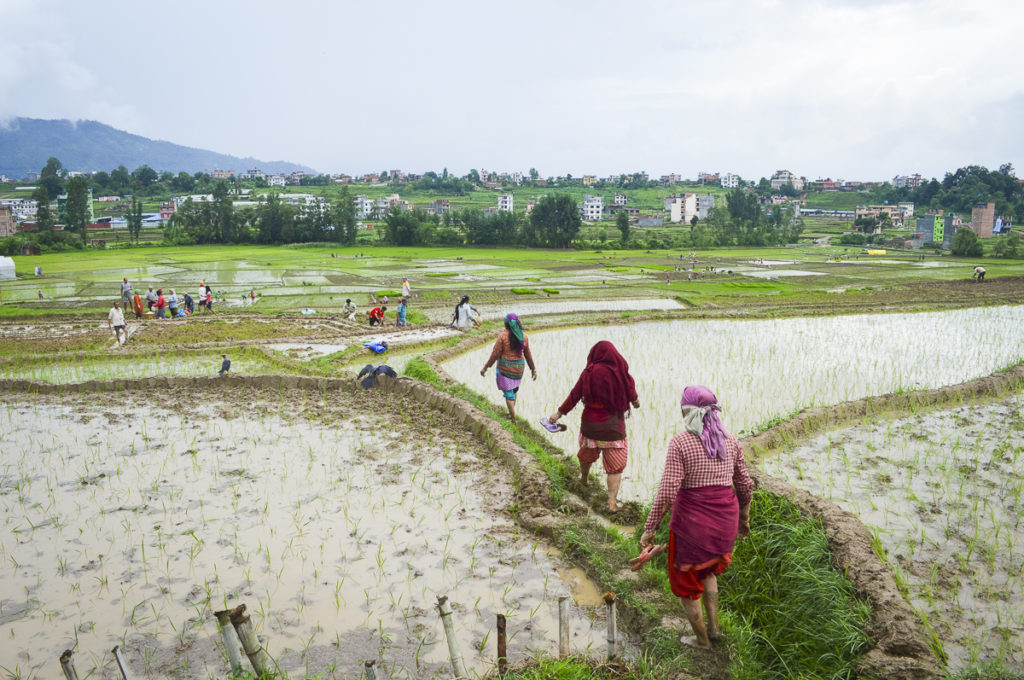 Farmers work in the paddy fields to plant rice seedlings. 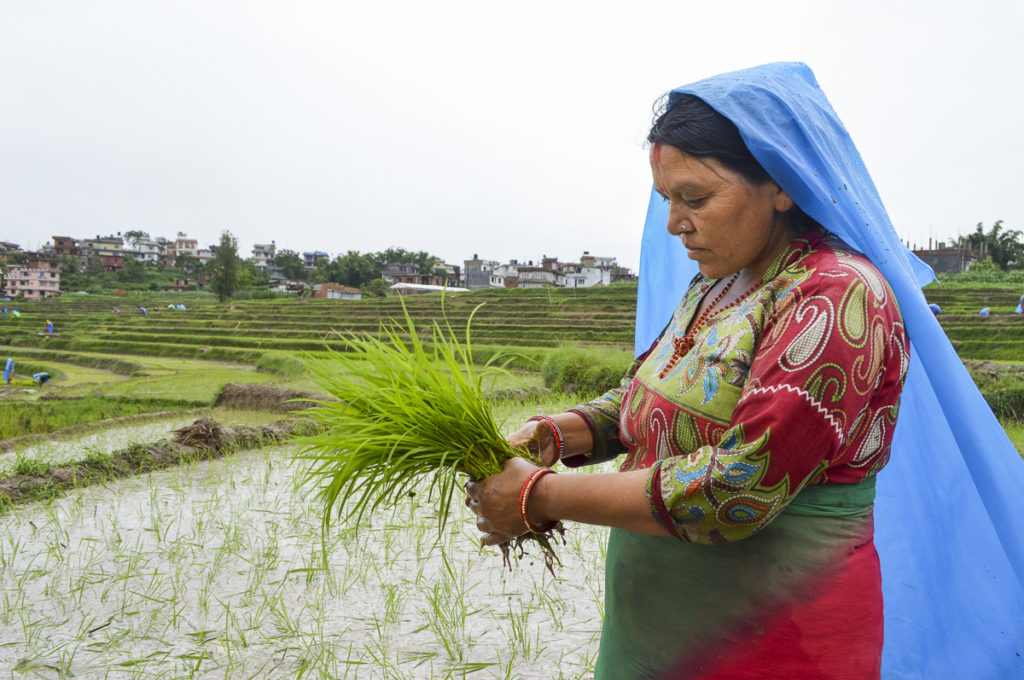 A farmer prepares to plant rice seedlings in the village of Kautunje. Rice production in Nepal fell after an April 2015 earthquake destroyed crops throughout the country. The agriculture sector suffered losses of around 28.3 billion Nepalese rupees ($264.9 million), according to one government report. 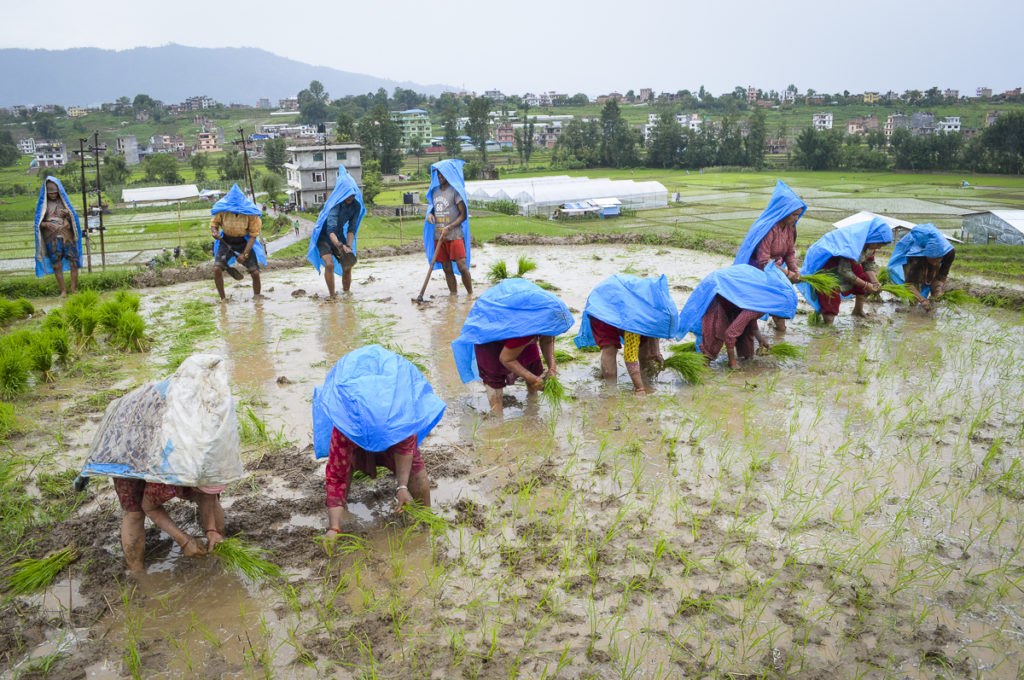 The farmers in Kautunje are among the two-thirds of all Nepalese who are engaged in agriculture, according to government data. 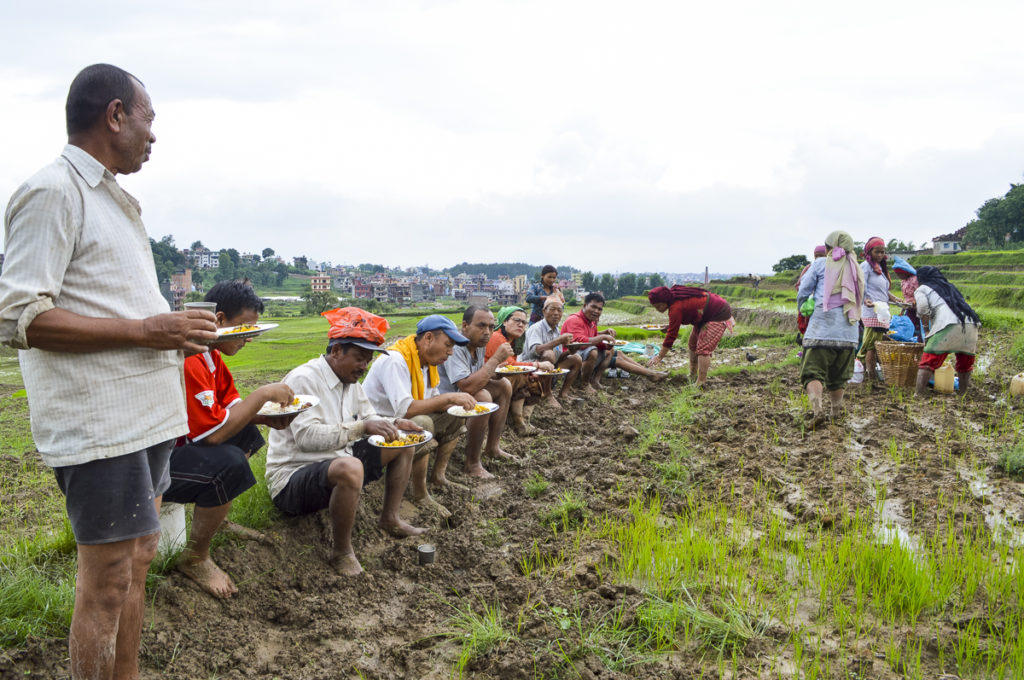 The first day of rice planting in the village of Kautunje took on the air of celebration as farmers returned to the fields. 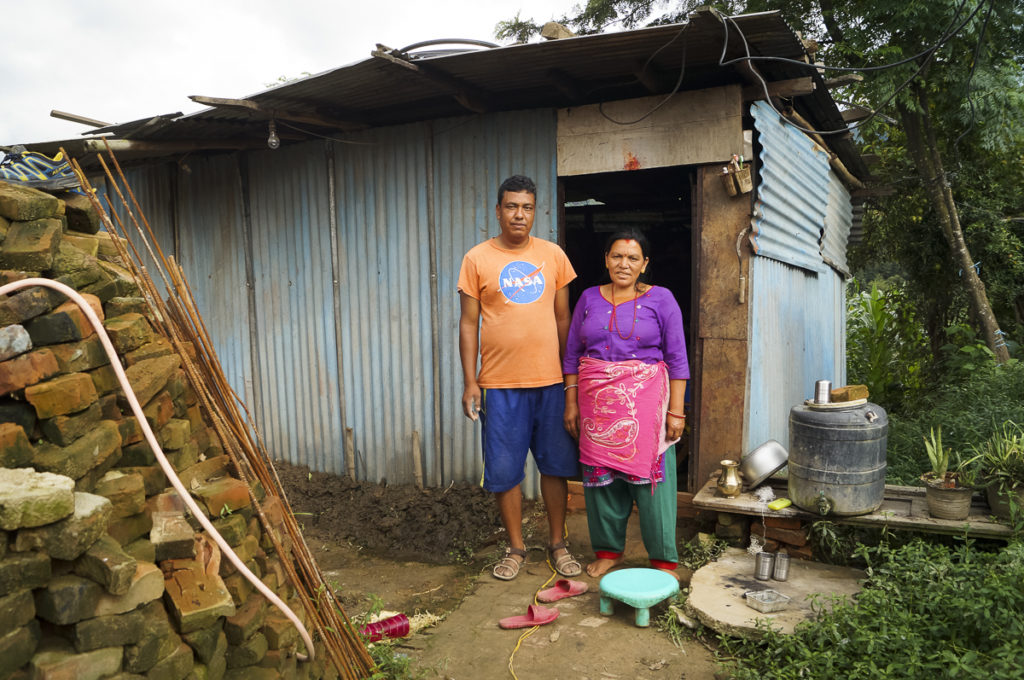 Shanti Thapa stands with her husband, Nani Ram Thapa, in front of their temporary hut. They haven’t lived in their home since the April 2015 earthquake, when it was destroyed. They’re in the process of rebuilding. 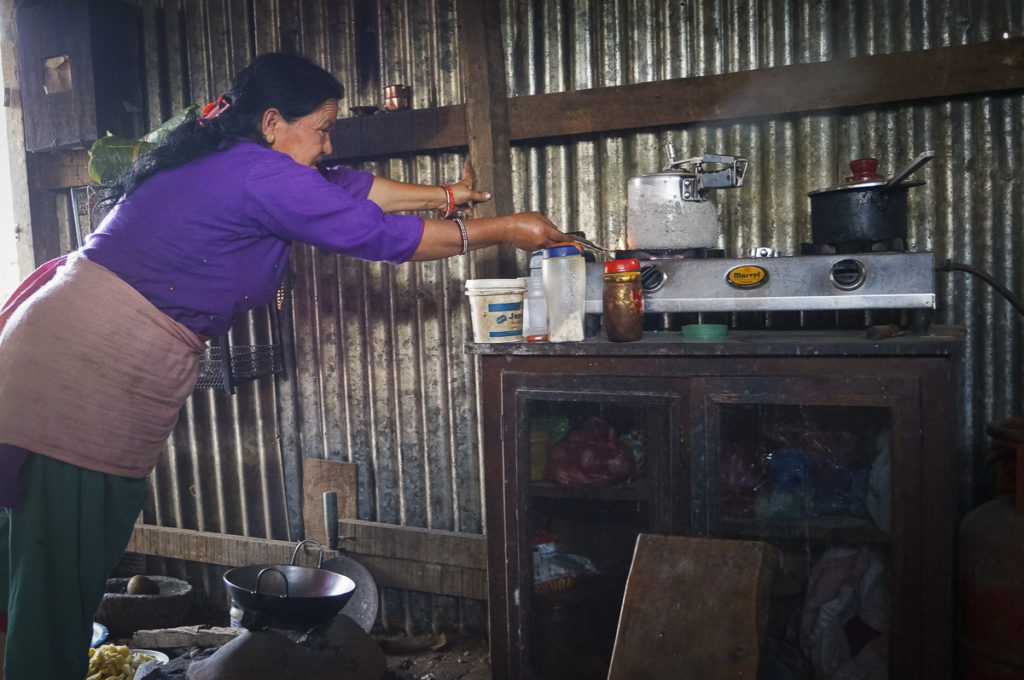 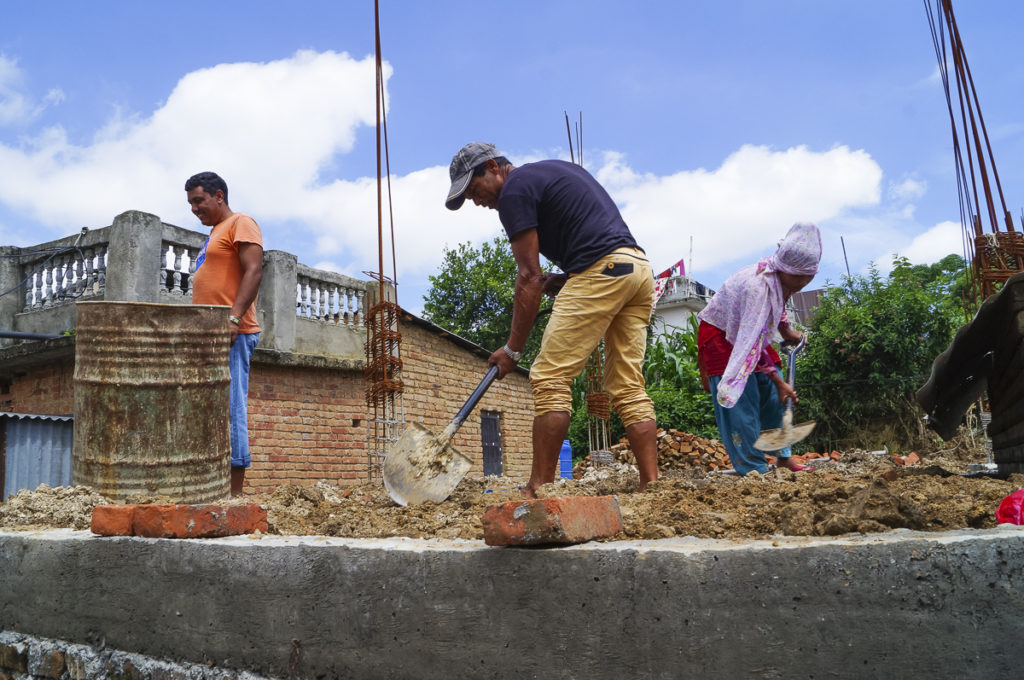 Shanti Thapa and her family are rebuilding their home, which was destroyed in the April 2015 earthquake. 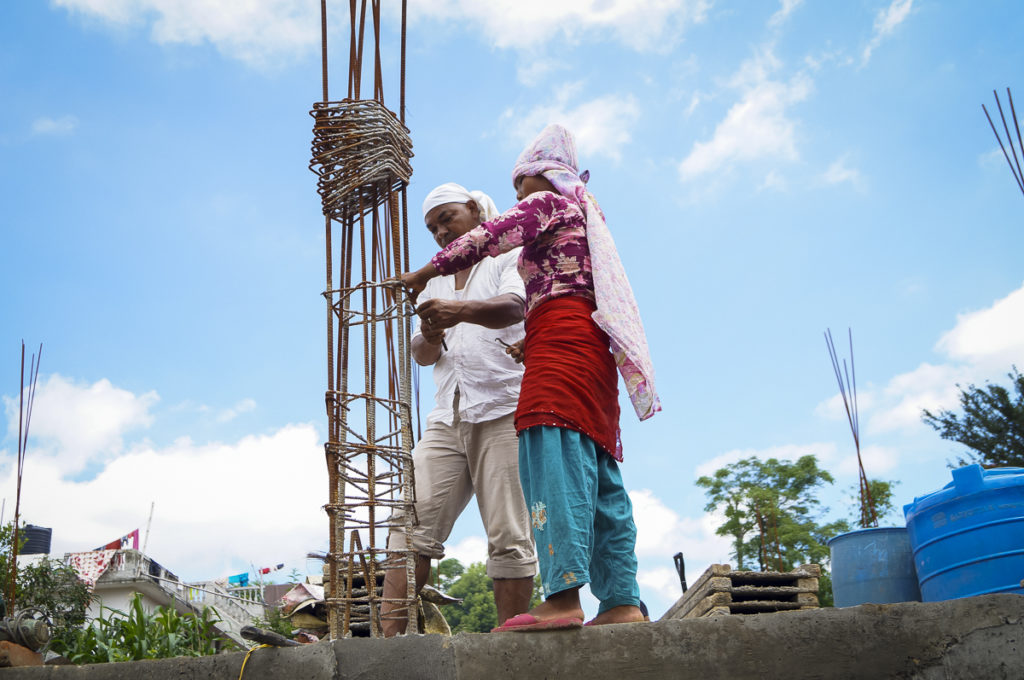 Shanti Thapa’s eldest son went to Qatar as a migrant worker to help the family save enough money to rebuild the family home. He sends home 15,000 Nepalese rupees ($140.) each month, she says. The family's original home was a traditional mud-brick structure, but the new house is being built with cement and kiln bricks. 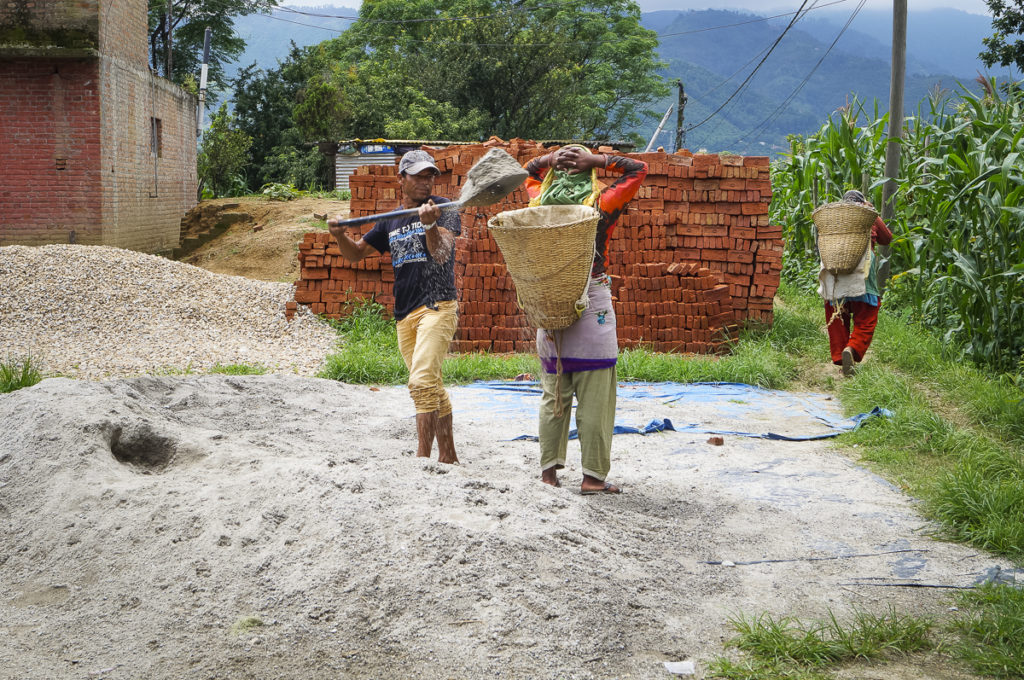 People in rural Nepal were hit hard by the April 2015 earthquake. Shanti Thapa and her family lost their stored seeds as well as their home. The home is being rebuilt, as shown here. 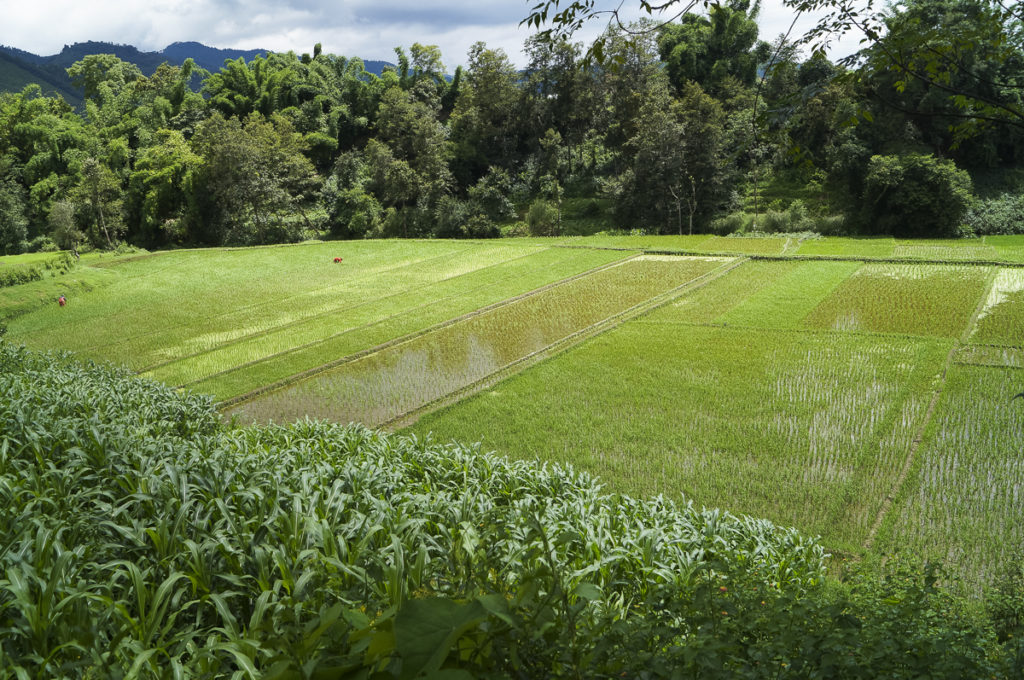 Rice fields provide a main source of income for many rural Nepalese, but rice production dropped by 22 percent in the year following the April 2015 earthquake, according to government reports.

After the earthquake last year, Thapa borrowed seeds from a neighbor whose store was not affected to plant half her family’s usual area of 2 ropani (about a quarter of an acre) of land, she says.

“If we had not planted a little paddy last year after the earthquakes, we would have had to live in hunger this year,” she says. “We would not have had any food to eat.”

The family has lived in a temporary hut since the earthquake.

“It has been difficult to eat, live, rear cattle and produce food due to the lack of a house,” says Nani Ram Thapa, 42, Shanti’s husband.

The family waited for almost a year after the earthquake to receive funds promised by the government to rebuild homes, Nani Ram Thapa says.

“After getting fed up of living in the shack for a long time, I started building the house,” he says. “But I have bitten off more than I could chew! Now I don’t have money, nor is there anybody to give me a loan.”

He was also motivated to begin rebuilding the house because, he says, he heard that the government would provide a loan of 2.5 million Nepalese rupees ($23,403) to each family. But the family hasn’t received that money.

A majority of families in their village are suffering the same plight, he says.

But now, with the new planting season, hope has come to the village. If all goes well, the farmers will harvest their crops between October and December.