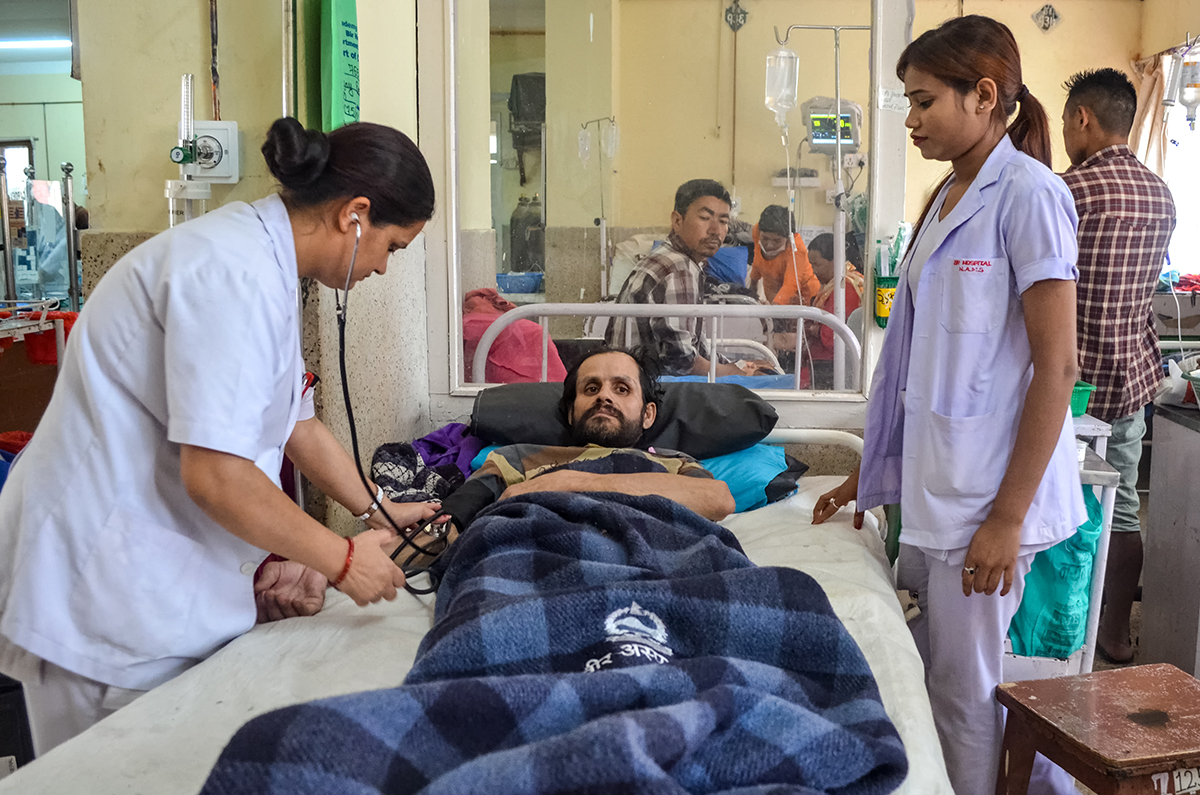 KATHMANDU, NEPAL — Lying on one side of his hospital bed, Bal Bahadur Tamang winces in discomfort. An enlarged prostate makes it difficult for the 58-year-old to urinate. He feels a burning sensation each time he uses the bathroom, he says. A week ago, Tamang was admitted to Bir Hospital, where he’s scheduled to have surgery to ease his symptoms.

But Tamang says he’d rather go home. He has reservations about the care he’s receiving and who’s giving it. While Tamang’s primary care physician is male, he says the nurses that look after him every day are all young women. He feels embarrassed when he exposes himself to them and describes the pain he feels.

“You cannot share all your pains with female nurses,” he says.

For years, the Nepal Nursing Council has only allowed women to enroll in nursing programs, leaving male patients such as Tamang with no choice but to be cared for and treated by nurses of the opposite sex. Local health care providers say most male patients feel uncomfortable or ashamed around female nurses.

But officials are trying to increase the number of men in this line of work. The Nepal Nursing Council, which issues licenses to all nursing graduates, issued an order in June requiring the country’s colleges to reserve for men 15 percent of available seats in their nursing courses.

In the late 1980s, only 10 percent of nursing students were men, says Goma Devi Niraula, president of the Nepal Nursing Council. At that time, that was the percentage the council had allotted for male students. But by the early 90s, Niraula says, the council no longer saw the need for male nurses and made the decision to scrap its quota system.

Today, nurses are the second-largest group of health care professionals in Nepal, but there are very few men in it.

The country’s nursing colleges graduate about 7,740 female nurses annually, says Roshani Tuitui, director of the Nursing and Social Security Division at Department of Health Services. There are 120 nursing colleges. National data on the number of male nurses is unavailable, she says.

At Bir Hospital, one of the oldest public hospitals in the country, there are more than 200 nurses – and not one is male, says Hira Niraula, the facility’s nursing administrator.

With a rise in communicable diseases in the South Asian country, and with many nurses moving overseas, Goma Devi Niraula says the Nepal Nursing Council made the decision to reinstate a quota system. As many as 3,000 nurses left Nepal between 2000 and 2008 for jobs in other countries, according to a study published in the medical journal Health Policy and Planning.

Some of those left behind think the reintroduction of a quota system is a good idea. Sumnima Singh, the nurse in charge of the male medical ward at Bir Hospital, says many of her patients would rather have male nurses.

“For example, if any patient is tested HIV-positive, we have to ask the patient about his sexual history,” she says. “At that time, it is difficult for us to ask, while it is more difficult for the male patient to share the history.”

Recently, an elderly man ran away from her ward.

“Not only him – there are many instances of patients running away,” she says.

The 15-percent allotment was introduced right before the 2018-19 academic year began in July. If nursing colleges comply, officials estimate that the country will graduate more than 1,000 male nurses by 2021, Tuitui says. Nursing programs last for 3 years.

Since the Nepal Nursing Council’s announcement, three male nursing students have enrolled at Iwamura College of Health Science in Bhaktapur, a city southeast of Kathmandu, says Sanu Maya Khadka, nursing director at the institution. This year, there were 40 spots available for the nursing program. While the college’s administration reserved six spots for male students this year, only six men took the entrance exam for the program and half passed, she says. Before this year, there were no male nursing students.

Roshan Tamang is one of the three new male students. He says he’s always wanted to be a nurse but never imagined that he’d be able to follow his dream.

Suman Sujakhu, Tamang’s classmate, had plans to go abroad to study nursing but couldn’t afford to do so, he says. He received a scholarship from the college to study what he loves, he says.

“I think of myself as very lucky,” he says. “I plan to serve patients after completing the course.”

Sujakhu feels fortunate, he says, but Nepal’s nursing sector is far from achieving gender parity. But the quota system is a step in the right direction, Khadka says.

“Female nurses alone cannot do all the work,” she says.