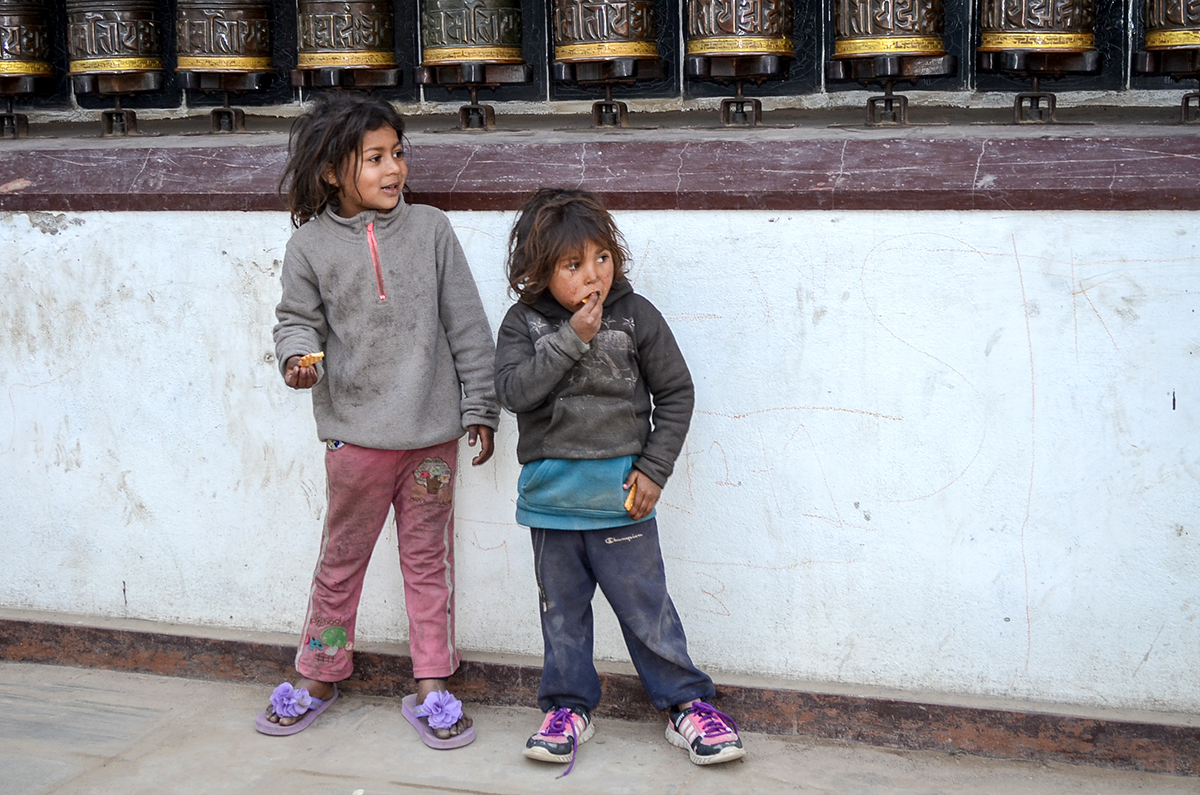 KATHMANDU, NEPAL — Six children, each with unkempt hair and dirty clothes, play in the dusty street of this capital’s Swayambhu area, which is best known for its ancient Buddhist shrines and temples.

Sabina, 7, turns away from the group, toward the main gate of the temple area.

“Keep on playing, but I am going to beg money to buy something to eat in the evening,” she tells her friends.

Global Press Journal is only publishing Sabina’s first name because she is a child whose guardian was not available to consent to publication of her last name.

Sabina lives with her family of eight in a rented room. They came two years ago from Jeetpur, a city in Bara district, along Nepal’s border with India. Her parents collect scraps during the day, but each night, she says, her father gets drunk. He scolds the children and beats their mother.

“It’s better to stay on the street rather than watching the show,” she says.

Sabina says she can earn between 100 and 200 Nepalese rupees (97 cents to $1.94) a day by begging. The street gives her what she needs, she says, but the police make her life difficult. They chase her and the other children, she says. Once, a police officer raised his baton at her and she fled home. But, as expected, there was no food there, and her parents quarreled.

“So, nowadays I hide immediately when I see police coming,” she says. “I come back on the street when they go away.”

There are an estimated 4,000 children living or spending most of their time in the streets in cities and towns across Nepal, says Madhav Pradhan, president of CWIN, a child welfare organization.

The government is working to find and rehabilitate the children who live on the streets in major cities. Between September 2015 and mid-May, 588 children entered into a program that placed them in a transit center with the aim of reuniting them with their families, says Sunita Shah, a child protection officer for the Central Child Welfare Board. 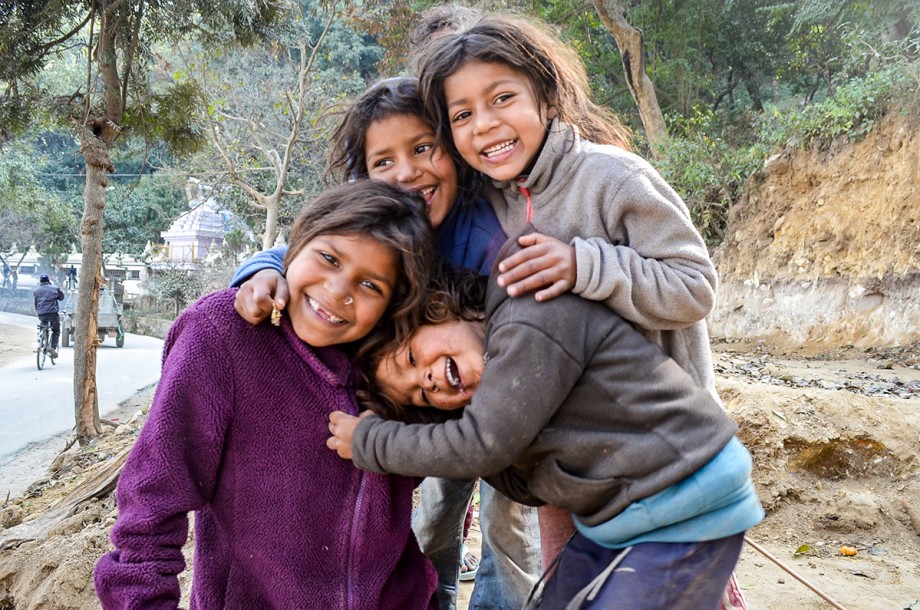 Children play in Kathmandu in February. As the government works to find and rehabilitate children living on the street, those children increasingly avoid public spaces during the day.

The Nepal Police, the Central Child Welfare Board, Child Helpline 1098 and other government and nonprofit organizations are all participating in the effort to find and help the children in Kathmandu as well as in the districts of Hetauda, Chitwan and Kavrepalanchowk, all of which are located near the capital.

The ultimate goal is to ensure that not a single child lives in the streets in the Kathmandu Valley, says Tarak Dhital, executive director of the Central Child Welfare Board.

But some children say they don’t want to return to their families.

Rabina, 6, and her sister Chhoti, 4, say they left home to get away from their stepmother. She beats them if they say they’re hungry, Rabina says.

The two little girls say they sleep in “patis” — small, public covered areas — if they’re not near home when night falls, but they’re often chased away by police.

“The police also do not allow us to live on the streets,” Rabina says. “Where and with whom we are going to live now?”

The girls’ last name is not being published because their guardian was not available to consent to that.

There’s no law in Nepal that prevents parents from hitting their children, says Prakash Mani Sharma, a senior advocate and executive chairman of Propublic, a social justice organization. In some instances, he says, parents hit their children so severely that the children wind up with psychological damage.

There would be fewer children on the street in the first place if parents loved and cared for them, Sharma says.

So, nowadays I hide immediately when I see police coming. I come back on the street when they go away.Sabina, 7, who spends most of her time on the streets to avoid violence at home

The country’s new constitution ensures the fundamental rights of children, says Santosh Adhikari, a planning officer at the National Center for Children at Risk. It specifically notes that helpless, orphaned or disabled children who are conflict victims or who live on the street should receive benefits from the state to ensure their futures.

Nepal’s 2012 National Policy on Children states that children living on the streets will be “systematically documented.”

The effort to keep children off the streets is multipronged. The National Center for Children at Risk, one of the agencies involved, monitors Kathmandu’s streets from 6 a.m. to 6 p.m., Adhikari says. The center began monitoring the streets last May as part of a collaborative effort with the government.

“Some of them would not prefer to live [off the streets] even if you offer the facilities of a five-star hotel,” Adhikari says.

The children are responding in their own way to efforts to help them. Often, they hide during the day and only emerge after 9 p.m., when they know police or people with centers like the one Adhikari represents are less likely to find them, he says.

Local people say the government’s efforts have been successful, even keeping the children from petty crimes during the day.

Sanumaya Tamang, 42, who operates a shop in a footpath in an area just west of Kathmandu, says there are fewer children on the street.

“Earlier, these street children used to steal stuffs from my shop and irritate people by begging money,” Tamang says. “These children would curse people if they do not give them money.”

Now, she says, the children have largely disappeared.