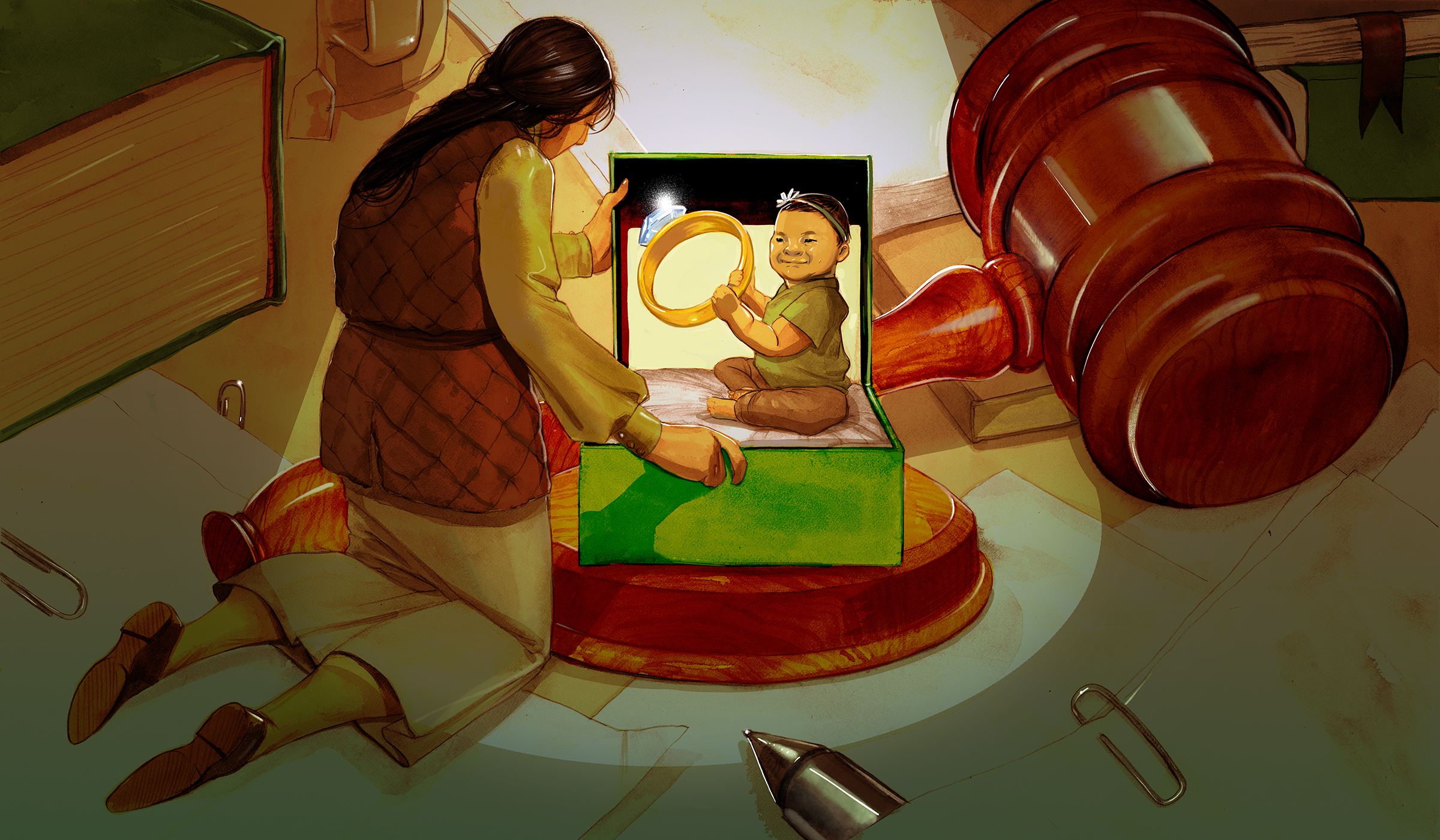 It was a relationship she now says ruined her life.

“The boy started getting closer to me. I was 16 years old at that time. My trust in him grew after seeing his affection for me,” she says.

Eventually, Rawal agreed to go out with him, but she says she didn’t want to have sex.

Seven months into their relationship, Rawal and her boyfriend went to a female friend’s house, where she says she was served a glass of apple juice.

After she drank it, she began to feel strange.

“I felt dizzy, and then I slept,” Rawal says. “Later, when I woke up, it was already evening. I was tired, so I stayed that night in her room and returned home the next day.”

It took a while for Rawal to realize what happened while she was asleep.

“My family members inquired about my growing belly,” she says. “In the initial days, I told them I was getting fat.”

But her belly continued to grow, and eventually her family took her to the hospital for a checkup. Even after a doctor informed her she was pregnant, Rawal says she could not work out how.

“After returning home, my father and older brothers interrogated me,” Rawal says. “They asked me the identity of the father of the baby in my womb. They beat me with a stick.”

She told her family the story of her friend’s house and the apple juice. Together, they deduced that she was raped while unconscious.

When the boy, who Rawal declined to name, was confronted, he admitted that he had raped her.
Soon after, he left town.

As a young woman unable to marry the father of her unborn child, Rawal says she humiliated her family and tarnished their reputation.

At the time, children born out of wedlock were denied legal status and could not obtain birth certificates, which causes countless issues, from hospital care to school registration. (That later changed, in part, with Nepal’s Citizenship Act of 2006.) Her family was furious.

She says her father and brothers beat her again and again.

Then, they took her to the doctor again. This time for an abortion.

She says she didn’t want one, but her father insisted.

“There was no one to raise their voice for my reproductive rights,” she says. “I wish no one in the next generation will face the misfortune that I ended up in.”

The way Nepal views sex and children out of wedlock is changing, though not in the way many expected.

Thanks to some recent – and controversial – changes to Nepal’s Civil Code, when a child is conceived out of traditional wedlock, the parents will be considered married in the eyes of the law, even if they are not.

The law passed in 2018 but is yet to be fully implemented, says Meera Dhungana, president of the Forum for Women, Law and Development, a local women’s rights organization that supports the new law.

She says she knows the new regulations will take some getting used to. But the law will also prevent long-term difficulties in citizenship, school registration and medical care, which are often denied to children born out of wedlock here.

“The implementation in society could be difficult in the beginning,” Dhungana says, adding that society is changing. She thinks in the long run it will increase women’s access to reproductive health options.

Now, some human rights defenders are calling for amendments to the law to clarify issues considered vague, like what circumstances would trigger the marriage provision or when a single mother would be allowed to have a child.

“The legal assumption of marriage has benefits,” Dhungana says. “This law provides legal status easily to those children born to women without a marriage.”

There is no government or NGO data to quantify how many women have given birth out of wedlock in Nepal. A 2014 Guttmacher Institute study, the most recent data available, estimated that some 323,000 women had abortions that year among women between the ages of 15 and 49.

While many have expressed discomfort with the new law – namely, the legal assumption of marriage that will automatically give citizenship to children born out of wedlock and force men to take financial responsibility for the child – others say the change will push society to update its definition of family and women’s rights.

“This law has become a powerful tool to establish my rights to my body,” she says, adding that in Nepalese society, family planning has traditionally been solely up to men.

Maishara Joshi, 44, says it’s going to be difficult for society to accept the legality of children born out of wedlock.

“The birth of baby without the father is not good. One can walk in society holding her head high only if she gives birth to her child after her marriage,” she says, adding that the consequences can be severe in village areas.

Many women who give birth outside of marriage are ostracized by their communities and forced to leave their villages. In some rural areas, a family may be so desperate to find a husband for a single pregnant woman that they will marry her to an older widower or other man typically considered unsuitable.

Even though Rawal’s pregnancy was terminated, she suffered severe social consequences anyway.

Three months after her abortion, she was married off to an alcoholic. “Despite knowing all about me, [his] family agreed to the marriage, with the hope I could correct his bad habits,” she says.

“After the marriage, my husband and his family members started to taunt and beat me, saying that I was a characterless girl because I had affairs with a boy,” she says.

She says her husband sexually assaulted her, too.

“He used to claw at my body,” she says. “If I said I wanted to sleep, he would beat me more. I used to leave the bed for work the next morning with bruises on my body.”

Rawal had four children with her husband, who beat her at the mention of contraception. She says the year of sexual and physical abuse made her suicidal.

She has attempted to take her own life multiple times.

Now divorced, which carries further social stigma, Rawal says if her first pregnancy had been recognized by the state and society, she could have avoided a life of pain.

“If the law was changed earlier, I would not have had to have an abortion,” she says. “I would have given birth to the child, even [if I had to] fight with society.”

There is no update on when the new law will go into effect.