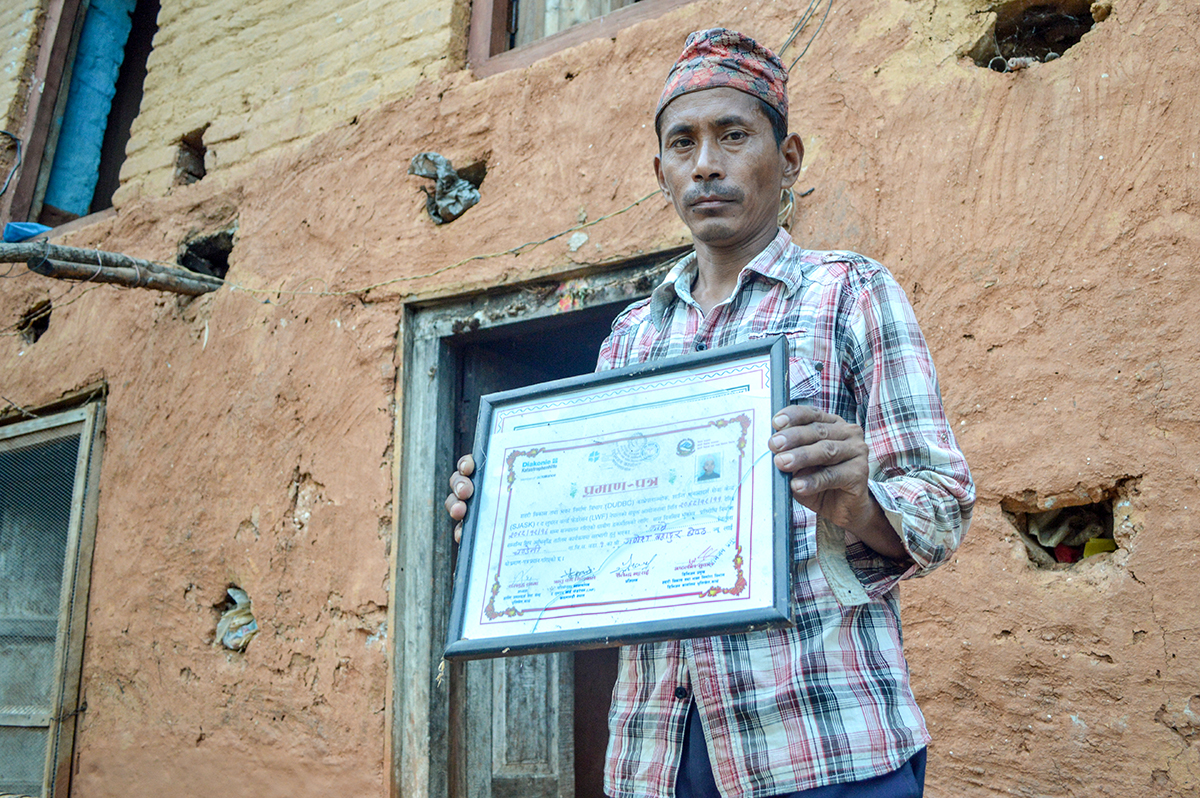 MANDANDEUPUR, KAVRE DISTRICT, NEPAL — It’s often cheapest to do something yourself, so when Tilak Prasad Dhakal lost his home in the 2015 earthquake, he took a 12-day masonry course offered by the government and built himself a new house.

He hoped, too, that his training would give him a steady job for years. Nearly 800,000 homes were damaged or destroyed in the quake. The government’s plan to train people in earthquake-resistant construction techniques was meant both to prepare people to help themselves and also to help others.

The government even promised 300,000-rupee ($2,895) grants, in three tranches, to landowners who lost their homes, so Dhakal, a freshly trained mason, should have plenty of work– in theory.

But no one has hired him.

The government shelled out 49.5 billion rupees (about $455 million) for reconstruction efforts in the 2016-17 fiscal year alone, according to top government officials, but there’s very little to show for it. More than 765,000 families were approved for home-reconstruction grants, but far fewer than 100,000 homes have actually been rebuilt, according to data collected by the National Reconstruction Authority (NRA), the government agency tasked with managing rebuilding efforts.

The situation is a disaster for the NRA. It has spent 60 million rupees (about $578,500) to train more than 44,300 masons and engineers, either through its own programs or through programs run by other organizations, but few of those trained are active in the reconstruction effort.

Far fewer than 100,000 homes have actually been rebuilt, according to data collected by the National Reconstruction Authority.

Meanwhile, there are more than 1,000 vacancies for NRA engineers. There are widespread complaints that the pay is low and the work is hard. Engineers often take their skills to the private sector.

But without government engineers, reconstruction stalls. Government grants come in three installments and the money must be used according to government guidelines in three phases. If work for the first phase isn’t approved by an engineer, a grantee won’t get the next installment of money.

But most Nepalese say the grant isn’t nearly enough to buy construction materials and pay workers. If they get the grant money at all, they say it’s depleted before they can hire trained builders. (Read our story about problems with reconstruction grants here.)

That frustrates Bhisma Kumar Bhusal, a spokesman for the NRA. People need to be willing to work hard to rebuild their lives, he says.

“They think the government should build houses for them,” he says.

But even for people who do the work themselves, it’s difficult to find an engineer who can come inspect their construction sites.

The goal is for each government engineer to oversee the construction of 750 homes, including approving initial building plans and inspecting ongoing work, says Suresh Kumar Wagle, who earlier this year was senior divisional engineer at the Urban Development Ministry. (He’s now at a different ministry.)

On average, Wagle says, there are five engineers deployed for each village and seven engineers for a municipality.

But for engineers, the pressure is too high, and the pay is too low, especially when deployed workers don’t get travel stipends to cover their costs while they’re away from home, says Vijaya Rana, an undersecretary at the NRA. When they find out just how little their pay is worth when compared with travel costs, they quit, Rana says.

It’s a “chronic problem,” he says.

Purushottam Thapa, an NRA engineer, says he walks 12 hours per day, on average, when he heads out to monitor home reconstruction. In most cases, his travel, food and lodging costs add up to about 1,500 rupees ($14.46). With so much travel required to even make a dent in the list of construction sites he’s supposed to inspect, his salary disappears quickly, he says.

He keeps the job, though, out of a sense of duty.

“I feel responsible for the nation during this difficult time,” he says.

If Thapa decided to seek a better-paying job, he wouldn’t have to look far. Employment agencies in Nepal constantly market overseas jobs to strong workers, particularly those with specific skills.

I feel responsible for the nation during this difficult time.Purushottam Thapa, an NRA engineer who says he’s underpaid

While many Nepalese who go abroad wind up in dangerous jobs that don’t pay as much as advertised – and some are even trapped by employers who refuse to let them return home – others earn good money and send much of it home to their families. People with specialized training have even greater potential to land a job that pays well, if they leave Nepal.

And even those workers who stay in Nepal say their chances for a good job are better in the private sector.

Ganesh Bahadur Shrestha, 38, went through specialized masonry training through the Lutheran World Federation in 2016, but he couldn’t find steady work after he completed the program. He wasn’t even able to build his own home, because he doesn’t have enough money, he says.

Now, Shrestha works as a general laborer, often as a porter, carrying goods for people.