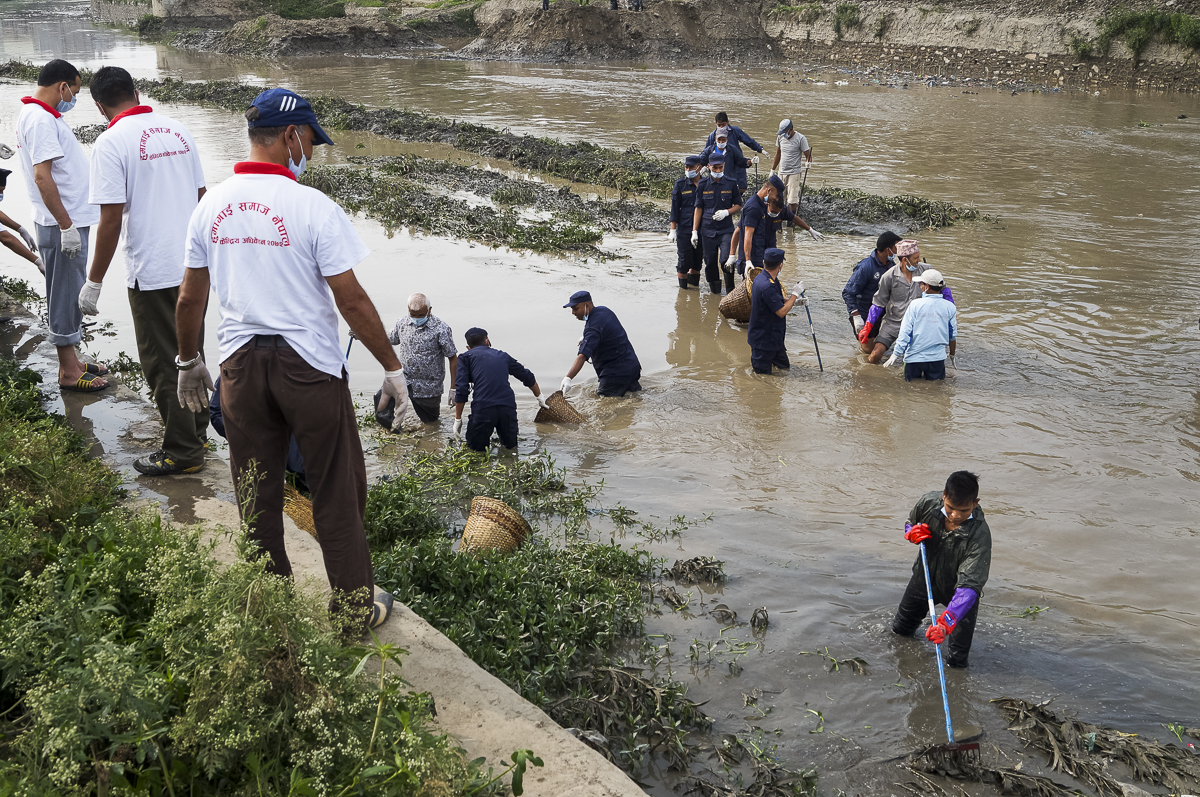 KATHMANDU, NEPAL — Dozens of people line the banks of the Bagmati River, which flows through Kathmandu city, the capital of Nepal. Wearing gloves and plastic boots, their faces covered with masks, volunteers collect heaps of garbage from the river and carry it into a nearby truck. Truck after truck is filled with the collected garbage.

This is a familiar sight every Saturday in Kathmandu, says Pashupati Neupane, a youth activist who has helped with the cleanups nearly every week since they began in 2013.

“While cleaning up the river as a group, we get a satisfaction that drives away the stench of the Bagmati,” Neupane, 31, says.

The Bagmati River is an important source of water, as well as a religious and cultural symbol in Nepal. But garbage and sewage pollute the river, making it stagnant and bringing disease to those living on its banks.

The Bagmati River Cleanup Campaign, initially a joint effort between 30 government and nongovernment groups with a focus on the Bagmati, now counts 2,000 organizations as its partners, including 400,000 people who have signed on to help clean four rivers in the Kathmandu Valley, says Purushottam Kanel. Kanel is part of the High Powered Committee for Integrated Development of the Bagmati Civilization, the state-appointed management committee for the river. 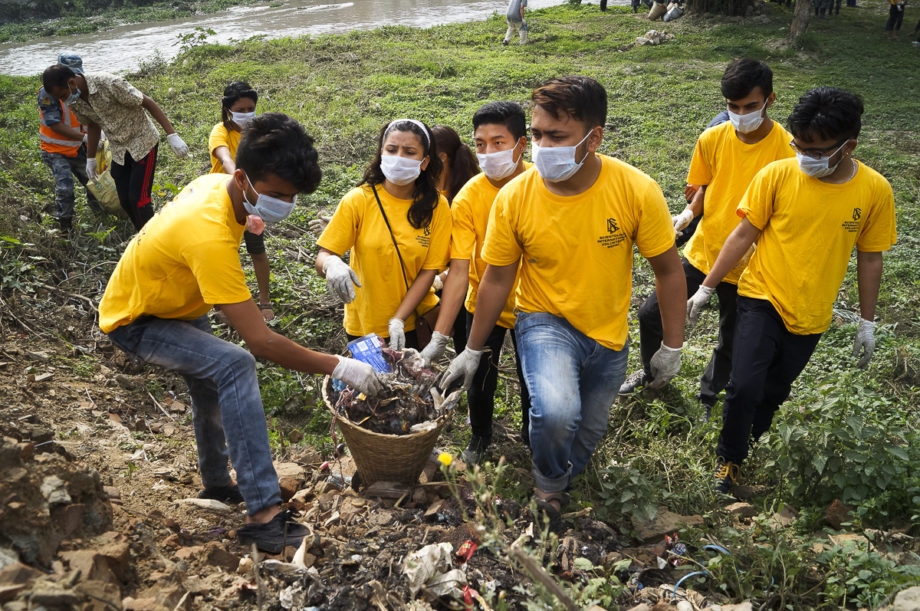 Volunteers use masks and rubber gloves to protect themselves as they clean up the garbage. Youth groups, school groups and other community groups often help out.

The four rivers included in the larger project are the Dhobi Khola, Karmanasa, Bishnumati and Bagmati, Kanel says.

More than 6,000 metric tons (6,614 US tons) of garbage have been collected since 2013 from the Bagmati River alone, Kanel says, citing the campaign’s estimates.

Even so, some activists say the cleanup on its own isn’t effective. It must be paired with government efforts to resolve ongoing water treatment and sewage problems, says Toran Sharma, technical director of Nepal Environment and Scientific Services, an environmental organization.

One man, who asked not to be named because his actions are illegal, says he tosses his garbage near the river when it’s not collected in his Kathmandu neighborhood.

“Though I don’t throw the waste into the Bagmati River, I throw it near the riverbank,” he says. “This is because I know the municipality truck comes to collect the garbage there.”

The pollution in the Bagmati became so bad, and the stench so unbearable, that people involved in the cleanup campaign felt compelled to take action.

“The river is our life, it is our civilization, our culture,” says Leelamani Poudel, former chief secretary of the Nepal government and a leader of the campaign. “So, it was necessary to clean up the river to make the life and culture lively, and awaken the people.”

Two years ago, just as the river cleanup project was gaining steam, a settlement of more than 200 homes on the Bagamati riverbanks were covered in sewage, says Hari Maya Jimba, who lives there. People were sick all the time, she says.

“I also suffered diarrhea many times,” Jimba, 40, says. “It was hard to live here due to the stench. It was difficult to breathe. The municipality used to bring garbage in rickshaws and throw it near our houses.” 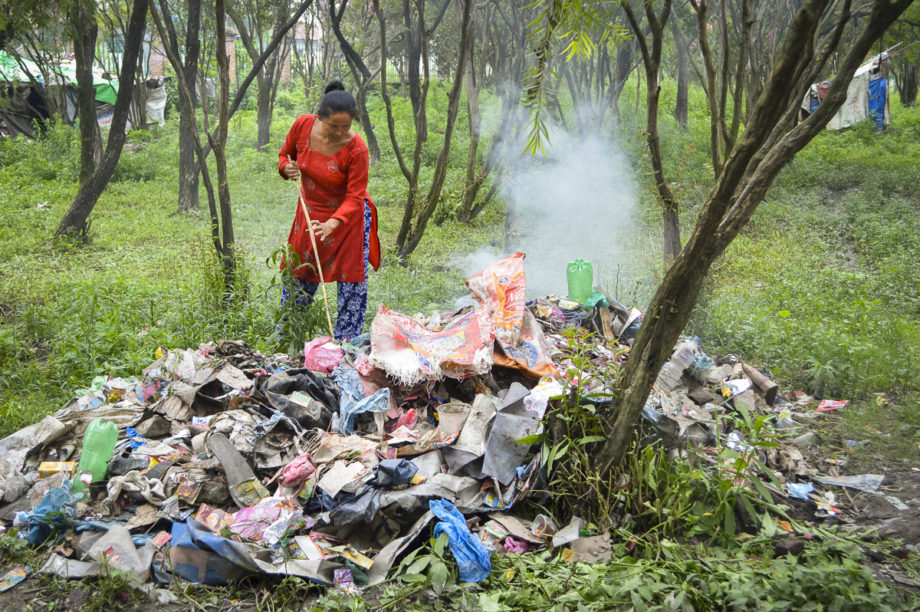 Hari Maya Jimba, a community leader, collects garbage to burn at her settlement near the banks of the Bagmati River.

In addition to health risks, the dirty river posed a problem for people practicing religious rituals. The Bagmati River is sacred for many Nepalese, and its waters have long been considered to have curative properties.

People thought to be in the final stages of life were once brought to the Bagmati to have their feet dipped in the water, says Satya Mohan Joshi, 96, an author and scholar on Nepalese culture.

According to local lore, some sick people have been completely cured after such rituals, Joshi says.

“But now it has become impossible as the Bagmati has become polluted,” he says.

Poonam Karmacharya, 40, a vendor at the Guhyeshwari Temple near the riverbanks, says she stopped bathing in the river during her prayer rituals to the god Shiva and the goddess Parvati about 20 years ago, when sewage and solid waste appeared in it.

“If I offered the water of Bagmati River, I would be cursed,” Karmacharya says. “How can I knowingly offer such water to the goddess?”

Conditions at the river were so bad at one point that people were reluctant to join what might have seemed to some to be a losing battle.

“At the start, it was difficult for people to believe that the river would ever become clean,” says Poudel, the campaign leader. “But since the water in the river started flowing when garbage was removed, people are now joining the campaign spontaneously.”

The campaign’s successes are piling up. Six thousand trees have been planted along the riverbanks, which prevents those areas from being used as dumping grounds, Poudel says. 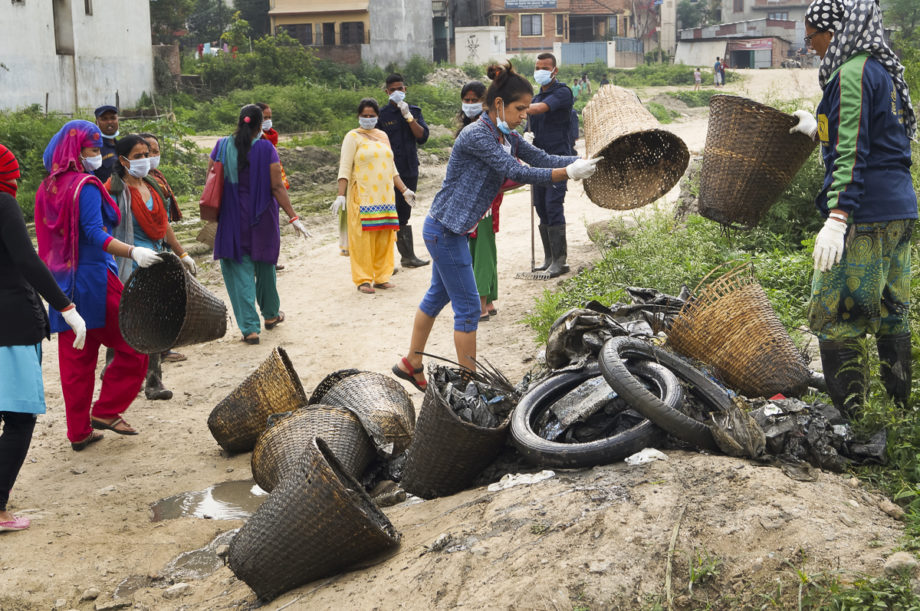 Volunteers use traditional woven baskets known as Doko to collect garbage from the river and its banks. They create a garbage pile that is later cleared away by city trucks.

Jimba, the resident of the once-sewage covered settlement near the river, is chairperson of the Kalika Womens’ Community, a group involved in the Bagmati River cleanup campaign. Today, the neighborhood has a ditch where garbage is collected and burned weekly. A sewage drainage system now ensures that there’s no stench, she says. And residents take initiative to clean the riverbanks themselves, she adds.

“The settlement is now clean,” she says proudly.

Karmacharya, the temple vendor, says the stench that was once too strong to bear is now gone.

“The river has stopped stinking in recent days due to the Bagmati cleanup campaign,” she says. “Though the water flowing in the river is still dirty, there’s no solid waste in the river as before.” 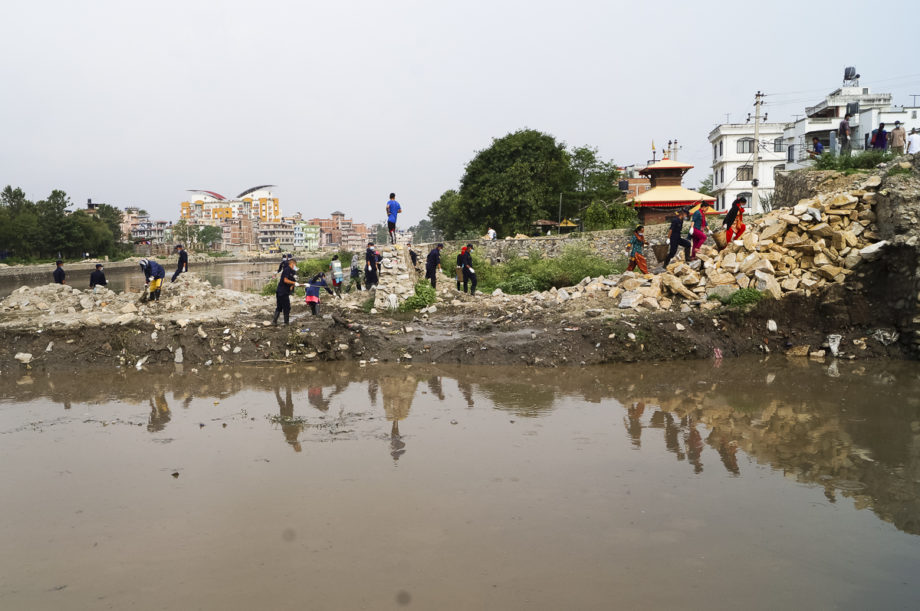 But still, more needs to be done.

The campaign is pushing the government to plant trees and build wastewater treatment plants, parks, public toilets and pipelines for drainage, Poudel says.

Rabin Man Shrestha, chief of the Environment Management Division at the Kathmandu Metropolitan City Office, says the city is doing its best. The division is battling a shortage of human and financial resources, he says.

The office supports the Bagmati River Cleanup Campaign by providing trucks to pick up the garbage gathered from the river and disposing it at landfills, Shrestha says.

Meanwhile, Kanel is casting his sights beyond the Bagmati. He hopes to extend the cleanup to 19 water sources that feed into the river.

As the campaign grows, participation from local people is key. People living near the Bagmati need to take responsibility, says Karmacharya, the temple vendor.

“Everybody should collectively clean up the Bagmati to keep it clean for a long time in the future,” she says.