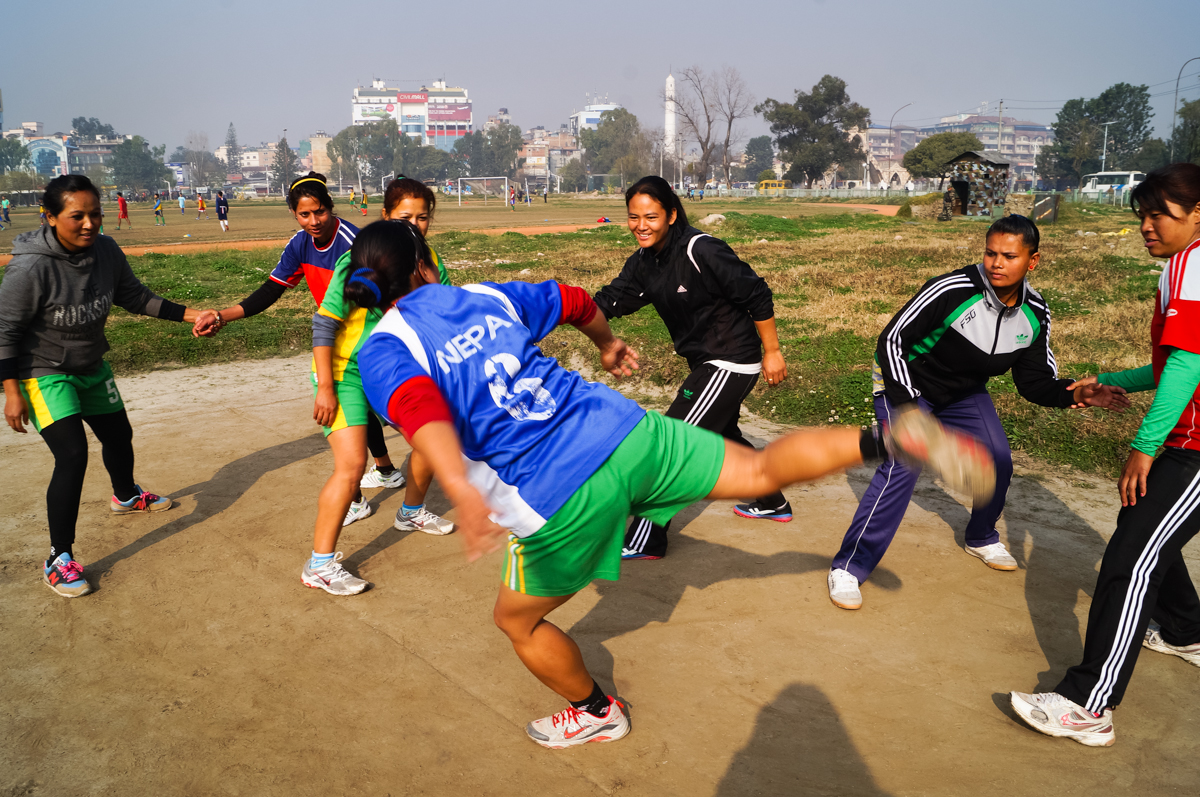 KATHMANDU, NEPAL – The morning sunshine falls softly on the players gathered at the sports grounds of the Tribhuvan Army Club in Kathmandu, Nepal’s capital. Sushila Magar, 29, is the tallest of the players on the kabaddi court.

Fierce determination on her face, Magar watches attentively as an opposing team member approaches Magar’s side of the open-air court. The opponent, called a raider, chants “Kabaddi-kabaddi” as she enters Magar’s side of the court. Magar swiftly moves toward the raider, grabs her and pulls her to the ground. Magar holds the raider until she stops her chanting to take a breath.

Magar has won a point for her team. Spectators respond with loud applause and shouts of encouragement.

Magar was only 5 when she started playing kabaddi, a game of tagging and tackling that rewards exceptional lung capacity, in her hometown in Dhanusha district, in the central development region of Nepal.

She has always loved the game.

“Back in school, when anyone called me to play kabaddi, I would forget to eat,” she says.

Today, Magar is a decorated kabaddi player. She has played all over Asia, even paying her own way when necessary.

Magar sold her gold jewelry to help fund her 2010 trip to Dhaka, Bangladesh, where she competed on Nepal’s team in the 11th South Asian Federation Games.

“We put in hard work to excel in the game, but we do not get to show our skills in international matches representing our country,” Magar says.

Aficionados have long considered kabaddi, a popular form of athletic entertainment, the national sport of Nepal. But players and coaches say government support for the game has declined.

A further blow to the game may come in April 2015, when the Ministry of Youth and Sports receives the results of a national survey aimed at identifying the national sport. The Constituent Assembly of Nepal will grant the chosen sport recognition and support.

Nepal’s kabaddi players fear newer sports, such as cricket and football, will garner greater public support, winning the national survey and making kabaddi a game that will live only in memory.

Kabaddi originated in India. It is not known exactly when it was introduced to Nepal, says Keshab Raj Gautam, Nepal’s first kabaddi trainer.

In kabaddi, two teams of 12 players compete by touching or capturing opposing players. Seven of each team’s players are on court at a time. A match, played on a court divided into two sections, lasts for about 40 minutes.

The team that wins the opening toss sends a “raider” into the opposing court chanting, “Kabaddi-kabaddi.” The raider’s aim is to touch any or all players on the opposing side while continuing to chant and return to her team’s court before she draws another breath. Members of the opposing team try to stop the raider and hold her on their side until she inhales. If the raider stops chanting before getting to her home court, she’s out.

The teams alternate sending players into the opposing court.

The game is popular in rural areas. It is played for entertainment as well as competition in Bangladesh, Sri Lanka, Japan and Pakistan.

The All Nepal Kabaddi Association, the sport’s governing body, was established in 1978 and began holding national tournaments in 1980. The tournaments were initially limited to men; women’s competition was added in 1982, Gautam says.

Many Nepalese came to think of kabaddi as the national sport because of its widespread popularity, Gautam says.

However, the game is not attracting as many players as it once did.

Some 600 kabaddi players, 250 of them women, are now registered with the association, down from about 3,000 male players registered in 1980, Gautam says.

The Nepalese government wants to formally recognize a national sport by the middle of this year, when the country’s new constitution is revealed, says Chuda Mani Paudel, joint secretary of the Ministry of Youth and Sports.

“Our nation will have an identity in the field of sports and get an opportunity to showcase the sport in an international sporting arena,” Paudel says.

In December, the ministry appointed a three-member committee to oversee the selection of the national sport.

Public opinion surveys were conducted, and district sports organizations and citizen groups discussed options in December and January, Paudel says. The National Sports Council coordinated many of the discussions at the district level.

The committee will weigh public input and present its recommendations to the Constituent Assembly of Nepal, he says.

The Constituent Assembly is expected to announce the national sport in April.

Cricket appears to be the top contender for the title, Paudel says.Once the government settles on a national sport, it will increase investment in the sport and make it compulsory in schools and colleges, Paudel says.

“If it is played since a young age, talented players will emerge who can perform well in the national and international arena,” Paudel says.

Government investment in the national sport could lead to victories in the Olympics and other international tournaments, he says, contributing to national pride.

Magar hopes kabaddi will become the national sport. Without government support, the game will die, she says.

Already, it’s becoming a thing of the past, she says.

“During our school days, everyone wanted to play kabaddi as soon as they entered the school playground,” she says. “But now children want to play cricket or football.”

Magar has contributed to the sport’s history.

Magar’s team won the championship in Dhanusha district in 1999. In 2005, Magar was on the national women’s team that competed in the Fifth Asian Kabaddi Championship in Hyderabad, India.

In the same year, she was recruited by the Nepalese Army and played on the first Army team of female kabaddi players when it was formed in 2007. Today, as a lance corporal, she plays for the Tribhuvan Army Club.

Nearly all professional players of Nepal’s major sports are members of or supported by the armed forces, says Prakash Timilsina, a senior sports reporter with Nagarik Daily, a national newspaper.

“Nepalese sports has developed with the active participation of three security agencies – the Nepalese Army, the Nepal Police and the Armed Police Force,” he says.

Accomplishments in the sport, such as Magar’s, are diminishing in cultural importance, says national kabaddi player Mahesh Bohara, 31.

“If some other game is declared as the national game, I am sure kabaddi will certainly vanish from the country,” he says. “Nobody will know this game in the future; they won’t even know whether it was played in the past.”

Bohara, who played kabaddi as a child, became a professional kabaddi athlete after he joined the Nepalese Army in 2003.

“Kabaddi is my life and passion,” he says.

Bohara hopes the game will still be alive when he retires from the army so he can work with young people to popularize it, he says.

But kabaddi trainers and players say the government is not investing enough to develop the sport in the country.

With such a small budget, it’s not possible to organize even small kabaddi championships to encourage the sport, Paudel says. It would cost about 50,000 rupees ($500) to organize a championship in one district.

Lal Kumar Lama, president of All Nepal Kabaddi Association, says it would cost around 500,000 rupees ($5,000) to organize a national-level tournament.

The only regular kabaddi championship in Nepal is the annual Kabaddi Tournament in Kathmandu, which the National Sports Council has organized since 1980.

Fans of kabaddi say they will be saddened if the game is not selected as the national sport.

Umesh Singh, 24, a student in Kathmandu who comes from Sarlahi, a district in southern Nepal, has been a fan of kabaddi since boyhood. He fears the sport will not be taught to new generations.

“If newcomers do not learn the game, it will gradually become extinct,” Singh says.

Timilsina, the sports reporter, says it’s best Nepal choose a game with international recognition, such as cricket, as its national sport. Cricket is popular in Nepal, and the national cricket team has performed well in international tournaments.

“Cricket has a good future in Nepal, more than any other sport, and it has the support of the young generation,” he says.

Kabaddi is not an Olympic event.

It should remain a traditional sport, Timilsina says.

“Kabaddi is an interesting local game,” he says. “All Nepalese like this game, so we do not have to spend money to promote it. As it is played in a team, the game plays a positive role in encouraging team spirit.”

Sujan Lal Shrestha, executive secretary of the Nepal Olympic Committee, agrees that kabaddi commands less recognition in international competition because it is not an Olympic sport.

“The game can be listed in the Olympics only if it’s made popular among American and European nations,” Shrestha says.

The Nepalese Army has included kabaddi as a sport in the Chief of Army Cup tournament to be held in August. This is the first time kabaddi has been included in the annual sporting competition.

“People in remote areas of Nepal have a common interest in kabaddi, so this game should be developed as a national game,” Magar says. “Otherwise, it’s worthless to play the game without getting any benefit.”