Skip to main content
The story you are reading was published on Wednesday June 15, 2016. To read more recent stories click here. 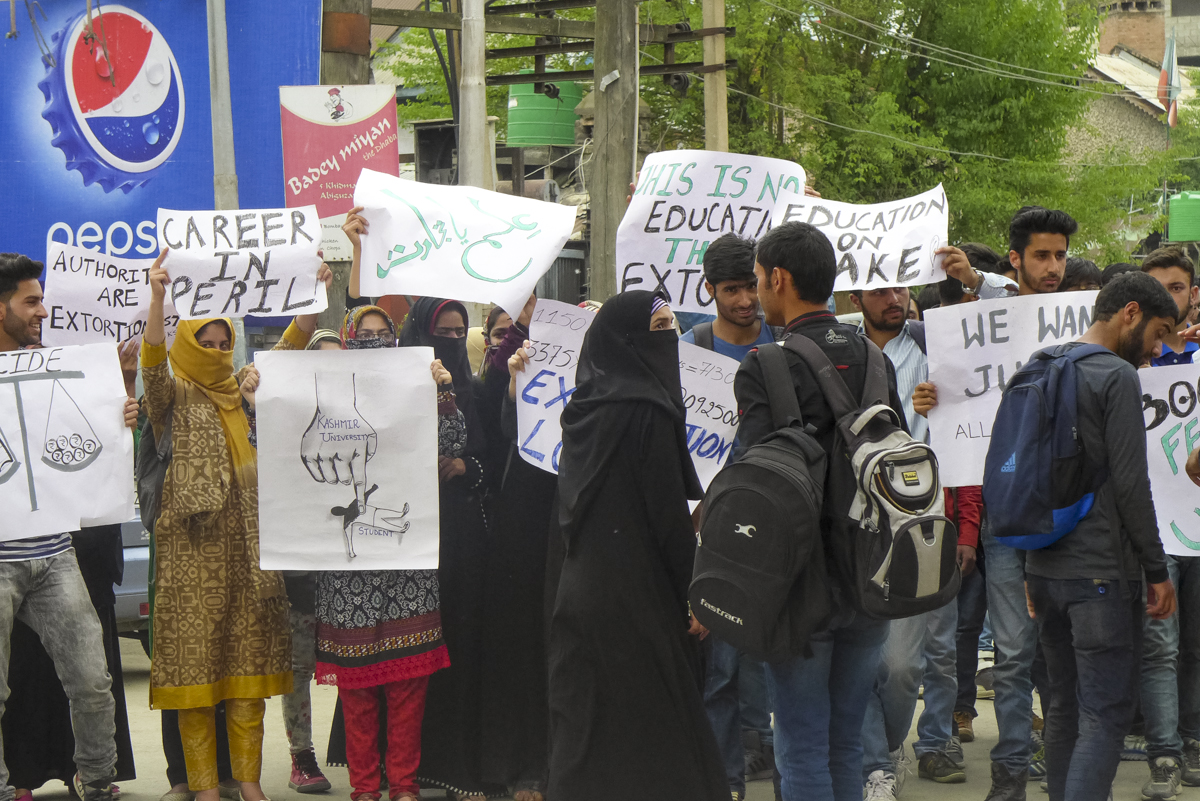 SRINAGAR, INDIAN-ADMINISTERED KASHMIR — Street protests are nothing new in this area, where the land has long been contested and many Kashmiris believe they should govern themselves.

Nayeem Ahmad Khan, the 51-year-old chairman of the Jammu Kashmir National Front, a political party in Kashmir, says protests have been common since the 1980s. Most focus on liberation from Indian governance, he says.

The trend has captured the fascination of academics and other researchers, as well as human rights organizations.

INSIDE THE STORY: A GPJ reporter learns the hard way that sources aren’t always available as planned. Read the blog.

Recent demonstrations turned deadly in April, when several protesters were killed by Indian security forces, according to widespread news reports. The rally was sparked after an alleged sexual assault of a girl by an Indian soldier. The incident, known locally as the “Handwara killings,” named for the town where the violence occurred, escalated when thousands of Indian troops were sent to the region, according to news reports.

This was only one recent incidence of violence in the face of protests in Kashmir. Local and international news reports note regular, public demonstrations by Kashmiris and consistent quelling efforts by Indian troops. Tear gas, batons, gunfire — according to widespread news and human rights reports, those are all common tools used to manage protesters.

And yet the protests continue.

Countless people have taken to the streets over the years. One of the largest recorded protests in Kashmir happened in 2008, when an estimated 500,000 Kashmiri people demonstrated against the handing over of state land to a Hindu religious organization.

Human Rights Watch reported a decade ago that at least 20,000 Kashmiris had died since 1989 in the violence and tens of thousands had been injured; the situation hasn’t changed since then.

Khan has been involved in protests from a young age. He says he and his family have never accepted Indian rule of Kashmir.

Global Press Journal’s Raihana Maqbool met with Khan to discuss the culture of protests and strikes in Kashmir. This is an excerpt from that interview. 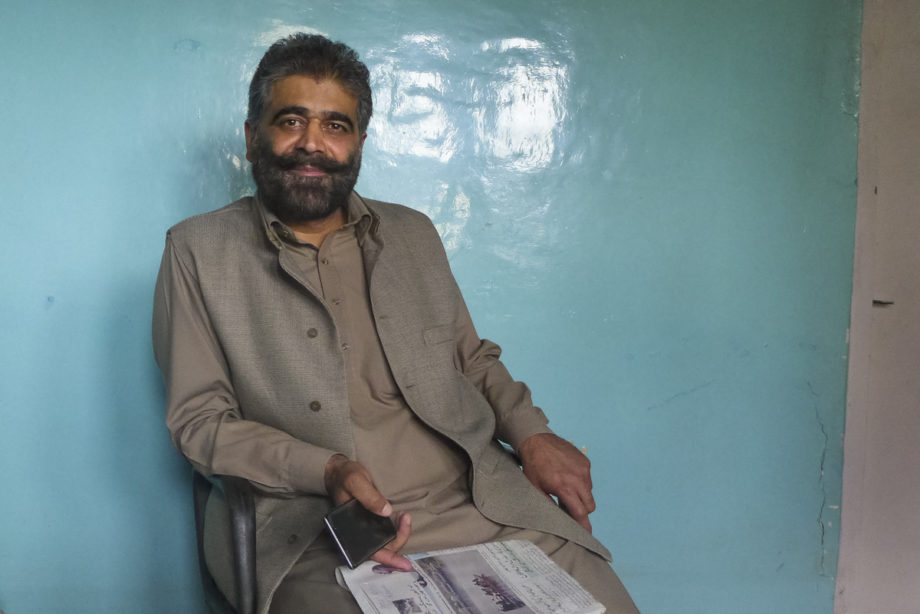 Nayeem Ahmad Khan sits in his Srinagar office. Khan, chairman of the Jammu Kashmir National Front, has been involved in protests and other activities in Indian-administered Kashmir since he was young.

Why are there such frequent protests and strikes in Kashmir?

It is important to hold demonstrations, protests and strikes because they are the only means through which we can make our voices heard to the world and show our dissent to India and the human rights violations taking place here.

There have been gross violations by the Indian army against the people of Kashmir. Thousands were killed and thousands disappeared. The violations still continue. The Handwara killings are the latest example of that. If people do not protest against such autocracies, many such incidents would take place.

When India choked the political space of the Kashmiris in early and late ’80s our youth were forced to pick up the gun.

How has the nature of protests changed over the course of time?

Look, if we talk about [the] 1980s and before that, there was a limited set of people who used to protest against illegal occupation [by] India, but now there have been a number of changes.

Now we have a mass movement on the ground. It is a public movement where the people are actively involved in it. People in the valley know the truth now, and they always protest and resist now. People are not ignorant now.

In 2008 and 2010, the whole Kashmir valley got together and expressed their dissent against India and the violations. Now we see protests via social media and graffiti as well. 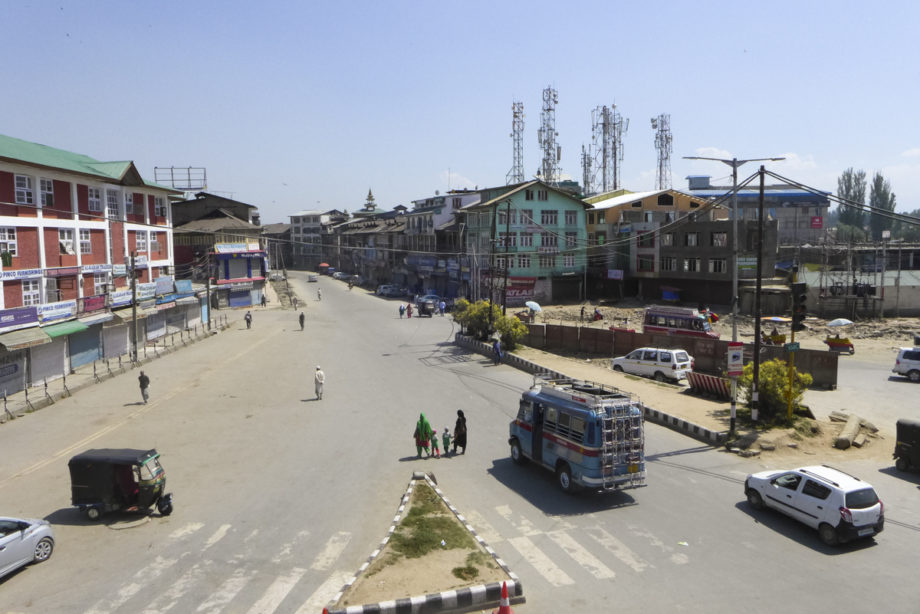 The streets of Srinagar are deserted as people commemorate two Kashmiri leaders who were assassinated during the month of May in previous years.

Do you believe the people of Kashmir have benefited from the strikes and protests?

It is not about the benefits, but we are running a freedom struggle against the mighty power of India. We are resisting Indian aggression [and] militarization through political means. We do not have any other option. What else can we do?

Yes, the protests and strikes have affected the economy of Kashmir, but, as the saying goes, in order to gain something we have to lose something. And the people of the valley are not against strikes and protests. They have always supported the protest and strike calls. It is a movement of the Kashmiris.

In your opinion, what have been the positive outcomes of the protests so far?

The whole world has come to know about what is happening in Kashmir. Kashmir has become a global issue now. Basically, our movement is a multipronged movement which comprises three fronts which include diplomatic front, militant front and political front.

Kashmir is an internationally recognized dispute, and it is important that our response to the illegal occupation of India has to be political. Even the United Nations recognized that Kashmir is a disputed region. In 2008, when the Amarnath land row happened, it is only because of such mass uprising that the plan of government to transfer land to the shrine board was stopped.

What have been some of the negative effects of the strikes and protests, in your opinion?

No, I don’t think there have been negative effects, and why should there be? It is a movement of freedom where the people are with us.

The strikes and protests often lead to closure of shops, businesses and offices in areas of the protest. These frequent closures affect small businesses and may impact the overall Kashmiri economy. Have you or your party taken into consideration the impact of protests on the local economy?

We are not habitual and we do not want our people to suffer. But it is India who is responsible for this. India has unleashed economic terrorism on Kashmir to break the political will of Kashmir. We are fighting for our fundamental and basic rights, but India is denying all this.

We are concerned about the people, and it is a people’s movement. We are only representing the movement. 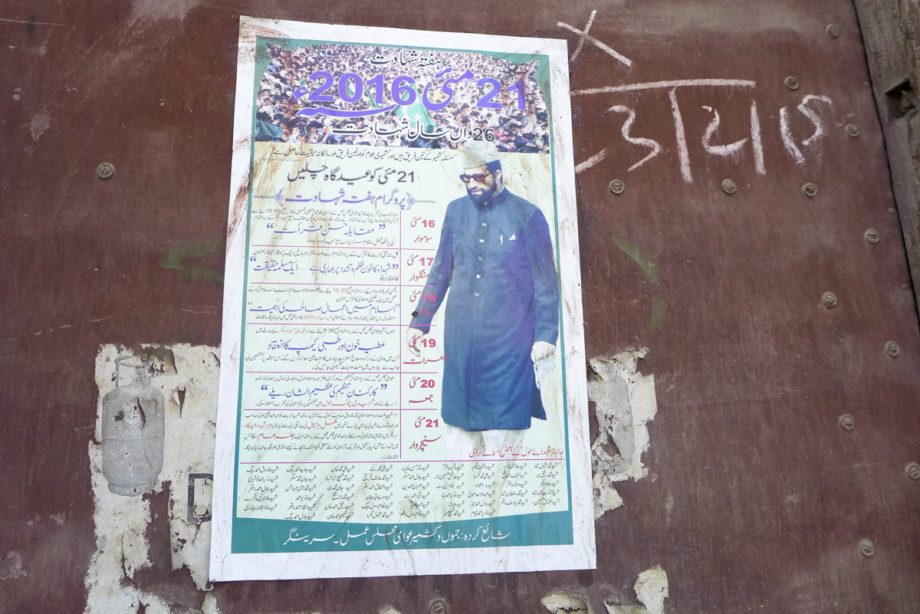 A poster announces events to commemorate the assassination of Mirwaiz Maulvi Muhammad Farooq, who was killed in 1990.

Some protests lead to violent clashes. Is there a way that protests can be peaceful?

Strikes and protests are globally known as the most peaceful forms of protest. India has to change because they are using the pellet guns on humans which are used by the rest of the world on wild animals. They answer the throwing of stones by firing ammunition on the protesters. India always crushes the peaceful protests by using pellet guns on our innocent youth.

What triggers the protests in the valley?

When the genuine right of the Kashmiris is not recognized, when there are a large number of human rights violations, the people come out and raise their voices. Recently in Handwara, five innocent people were killed by the army, and why should people not protest at such a time?

In order to achieve an objective, we turn to protests and strikes, as we have no other way. Due to the mishandling of the protesters by the Indian army, more protests follow. The army simply fires on the unarmed protesters.

In your opinion, will the frequent protests and strikes in Kashmir continue in the foreseeable future or will they draw to an end?

As long as there is illegal occupation [by] India in Kashmir and the presence of the Indian army, we will continue to resist them. We are not tired, and our nation is not tired.

[The protests] will only end when the army is sent back, the Armed Forces Special Powers Act is lifted from the valley, and we will gain freedom. We are hopeful and confident that the day is not far when we will be free.

Raihana Maqbool, GPJ, translated parts of this interview from Urdu.