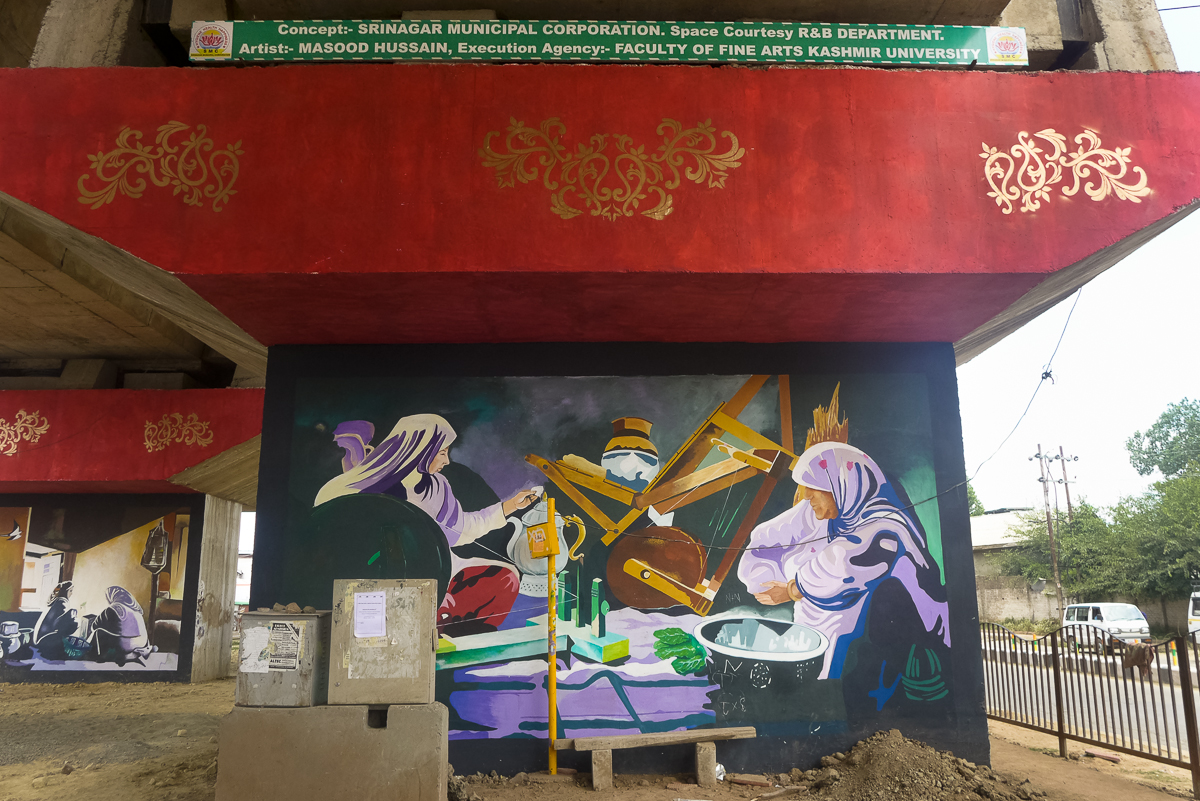 SRINAGAR, INDIAN-ADMINISTERED KASHMIR — People walking under an overpass in Srinagar, the summer capital of Jammu and Kashmir state, stop to look at colorful art on four pillars. The murals show Kashmiri women cooking, children playing and other scenes typical of rural life here. Some passersby take photos of the murals or selfies in front of them. Others silently gaze at the paintings.

The Hyderpora overpass connects Srinagar to the national highway linking Kashmir to Jammu — and the rest of India. Below it is a busy city intersection.

One of the pillars supporting the overpass was once covered in another type of art: Graffiti decrying a 2013 peace concert featuring Zubin Mehta, an Indian conductor. For many Kashmiris, an Indian presence of any kind is an affront to their quest for sovereignty. The graffiti artist read, “Go Zubin, Go back!”

But that graffiti is gone now.

Saqib Bhat and five other artists were commissioned in May 2015 by the Srinagar Municipal Corporation to paint murals showcasing Kashmiri culture on the pillars. They have completed four murals to date, and the fifth is planned for the Humhama area, which is near the airport in Srinagar. Officials at the municipal corporation hope to, over time, scatter murals throughout the city.

What they are slowly trying to do is to paint all the walls of Srinagar, where the messages of anger against the occupation are written. They want to erase it all and are giving it a name of culture, but I believe it is a colorful censorship. — Mudasir Nazir, 29, Srinagar resident

“A number of people appreciated us for the project,” says Bhat, 22, noting that people stopped to watch the painters at work. “It feels good.”

But others see the murals as a passive form of censorship.

“What they are slowly trying to do is to paint all the walls of Srinagar, where the messages of anger against the occupation are written,” says Mudasir Nazir, a 29-year-old Ph.D. student. “They want to erase it all and are giving it a name of culture, but I believe it is a colorful censorship.”

The Srinagar Municipal Corporation plans to expand the mural project throughout the city. But as more murals are produced, some Kashmiris worry that more graffiti will be covered.

The corporation’s officials deny those allegations. The murals are part of a plan to make the city more attractive, officials say. The six student artists, all native Kashmiris, say they are not depicting any controversial images, only scenes depicting traditional Kashmiri life.

Residents of Indian-administered Kashmir are divided on who should govern them. Some accept Indian rule and some push for Pakistani rule. Others seek establishment of an independent state. Militant groups in areas bordering the Line of Control have fought Indian security forces for decades.

The new murals are located in the uptown area of Srinagar, where there are usually fewer protests compared with the downtown area.

“The walls of the city look dull, and the project was created in order to beautify them,” says Tufail Matoo, commissioner of the Srinagar Municipal Corporation. “People who see the Kashmiri culture painted on the walls will definitely learn about the culture here.”

It’s not clear whether future murals will cover graffiti, but Matoo and others involved in the project all reject the idea that the mural project is intended to censor graffiti artists.

Graffiti is usually present in the places where suppressed youth are not able to express their feelings freely, says Tariq Ahmad Rather, a sociologist at the University of Kashmir.

“In conflict hit zones, youth become the first causality and in order to express themselves, they take up such tools like graffiti,” Rather says.

Indian-administered Kashmir has experienced media censorship, too. During 2008 and 2010, times of crisis, some newspapers were banned and the Internet was blocked, he says.

Graffiti has been present in Srinagar for a long time, but it wasn’t a common sight until around 2008, Rather says.

“Graffiti became a new medium of expression after stones and arms,” he says.

Several graffiti artists were detained by police during the 2008 and 2010 uprisings, Rather says. 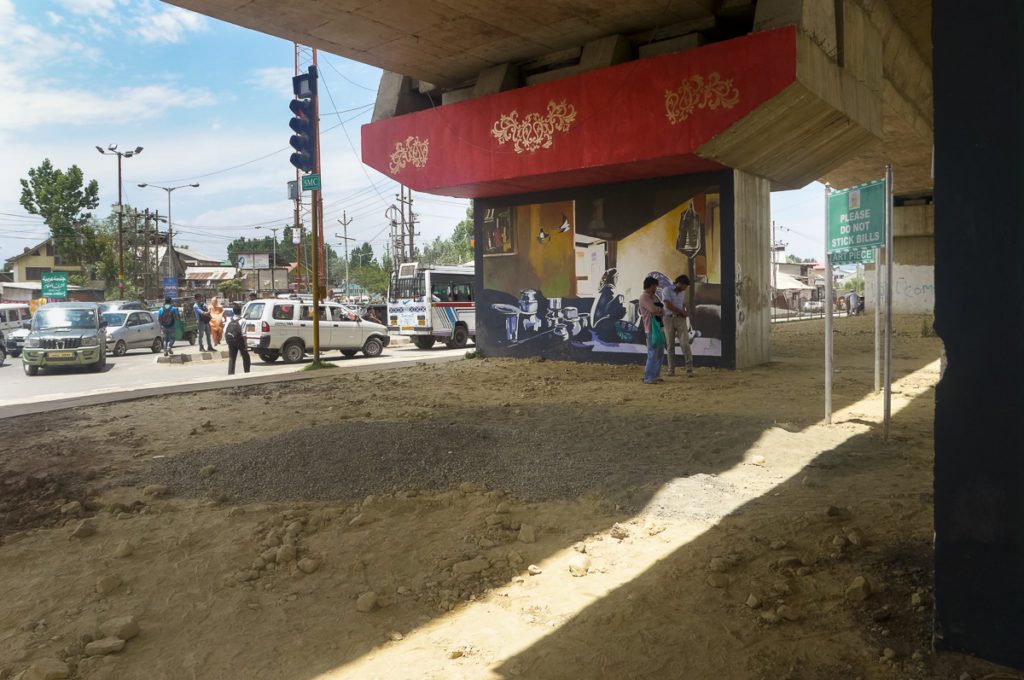 The Hyderpora overpass is the first location for a series of murals intended to beautify sections of Srinagar. 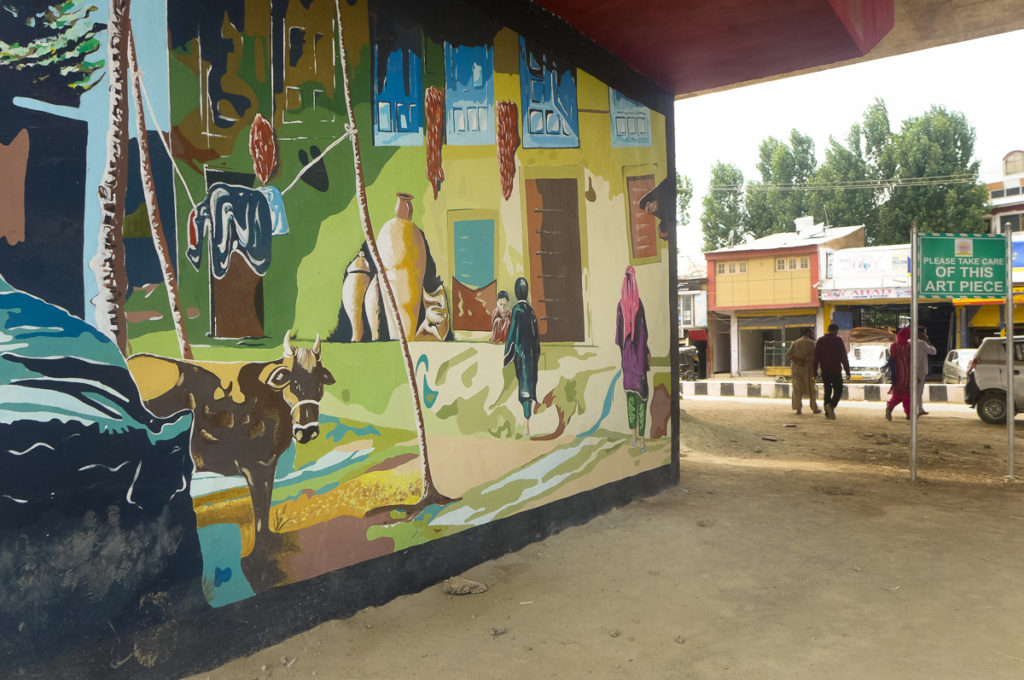 Four murals have been completed, and a fifth, set for a separate location, is scheduled for completion in August. 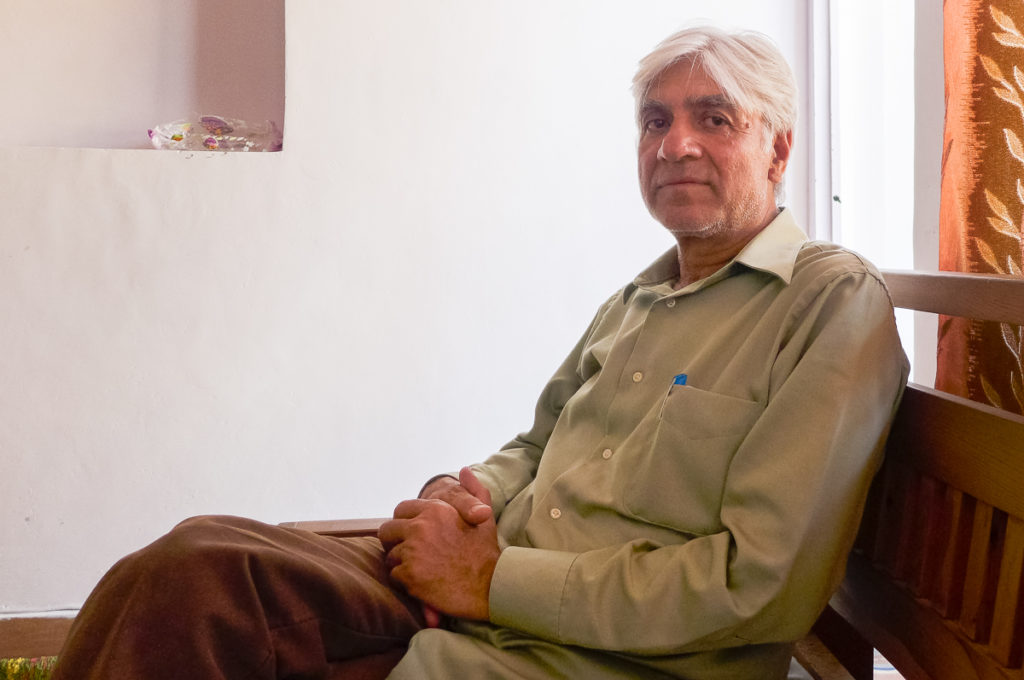 Masood Hussain, a renowned Kashmiri artist, led the mural project, which some Kashmiris see as a form of censorship because the new art covers anti-Indian graffiti. 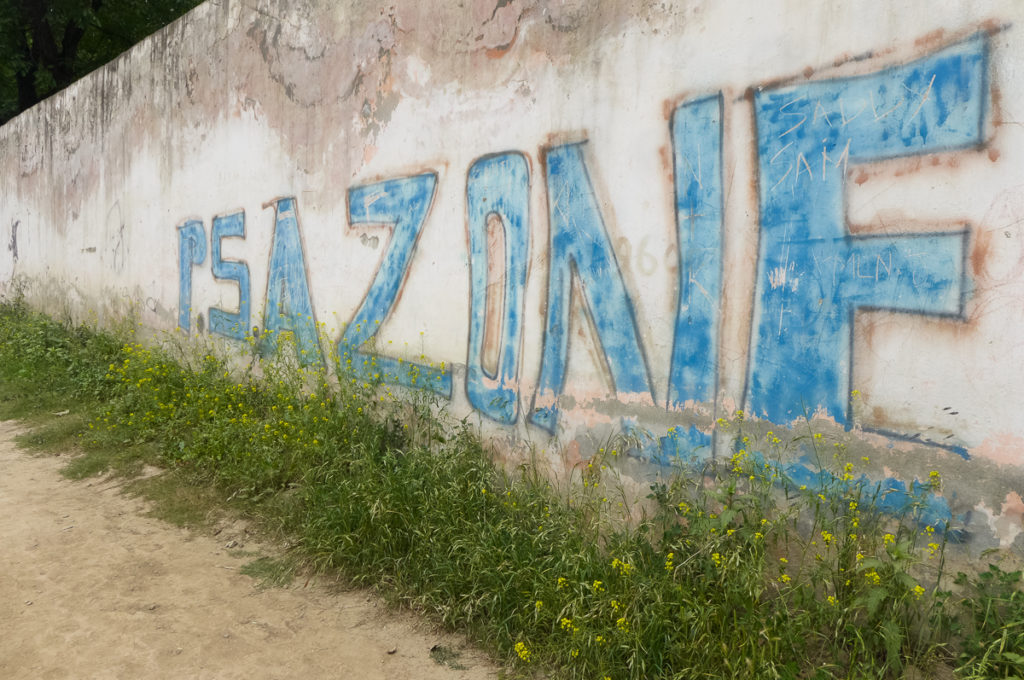 Graffiti is common in Srinagar, where young people use it as a form of protest against Indian rule.

Officials at the Jammu and Kashmir Police headquarters in Srinagar say they do not have a record of those arrests, and that many of the protestors arrested during those insurgencies were released after being issued warnings. Police records don’t indicate why individual protesters were detained, officials say.

In the downtown area of Srinagar, messages including “Go India, go back,” “Indian Dogs Go back,” and “We Want Freedom” are seen on public and private walls. The graffiti is written in English and Urdu.

Sarmad Zargar, 34, lives in the old city of Srinagar, where graffiti is common. He says he has faint memories of seeing graffiti in the 1990s, but anti-Indian slogans later began to spread.

“During the course of time, graffiti appeared in other parts of the city and Kashmir,” he says.

Masood Hussain, a well-known artist in Indian-administered Kashmir and a former faculty member of the Institute of Music & Fine Arts at the University of Kashmir, was selected to lead and coordinate the project. Hussain identified six young artists from the Institute to work with him.

Bhat, Sumaira Majeed, 22, Maria Fayaz, 22, Zaid Bhat, 21, Suhail Sofi, 21, and Bushra Mir, 21, were commissioned to paint the murals. None of the artists are open about their political views.

Hussain chose the Hyderpora overpass as the location of the first four murals because it is a prominent intersection. It’s on the road linking the city to the airport and is seen by tourists.

“The people who visit the valley will leave with beautiful messages when they see the beautiful graffiti,” Hussain says.

The trouble for Daniyal Ahmad, 23, a university student, is that the murals’ message is not the one many young Kashmiris are desperate to send.

“I feel that slowly the government is trying to restrain our freedom of expression by painting the walls,” he says.

Ahmad says he wants Kashmir to be an independent state, one that is not ruled by either India or Pakistan. Kashmir’s graffiti reflects the true emotions of the Kashmiri people, he says.

“The walls, which are full of the messages of freedom, are a means for us to protest against the occupation. The government is trying to do it in a way so that people do not start opposing the paintings,” he says.

But some of the older residents of Srinagar appreciate the murals.

Mohammad Hanief, 61, is a retired teacher who lives in the Peer Bagh area of Srinagar, close to the Hyderpora overpass.

“Before this painting was done on the Hyderpora flyover, the walls looked shabby,” he says. “But now they look so beautiful.”

Saqib Bhat and Zaid Bhat are not related.