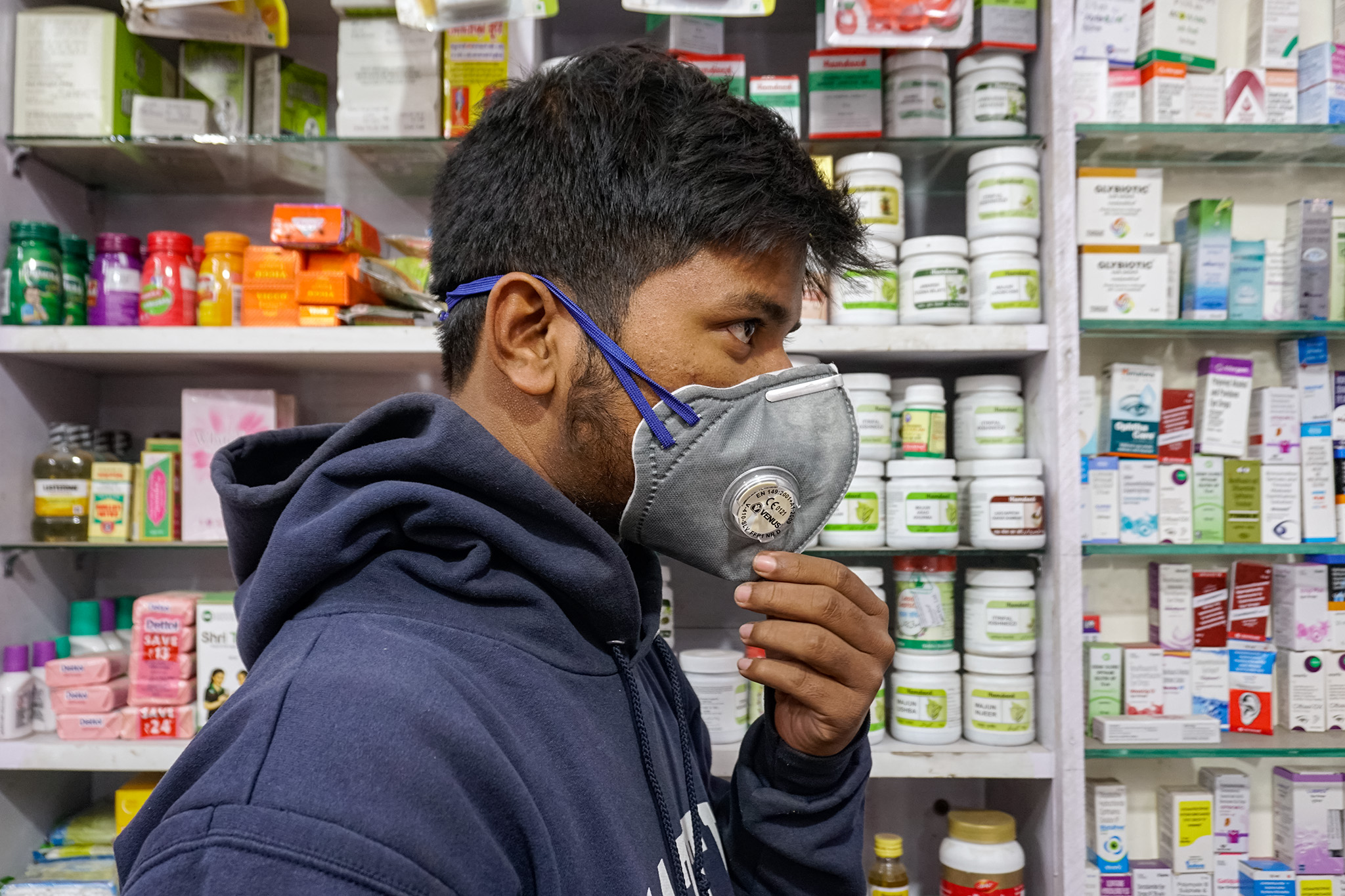 NEW DELHI, INDIA — When the pungent smell became unbearable, Babita Kumari, 32, left her one-room home in Ambedkar Colony in R.K. Puram and headed for the pile of garbage outside her door.

Grabbing a plastic shovel, Kumari scooped up the main source of the foul odor – a decaying dog carcass on the pavement. A few meters away, a neighbor warmed himself by spilling petrol onto a bonfire of garbage. Sooty smoke floated from the embers, and a blanket of foul air engulfed her house, making it hard for Kumari to see her way home.

Kumari, a domestic worker, was recently diagnosed with a severe respiratory infection. Two of her three children – Sunny Kumar, 10, and Sahil Kumar, 9 – have complained of headaches, chest congestion and itchy eyes and skin many times in recent months. She worries enough about sending them into Delhi’s polluted streets, but then there’s her 5-month-old son, Saurab, to consider.

“I took my youngest son to the hospital many times for oxygen,” Kumari says. “The doctor has advised to keep him home all the time. But I can’t afford to do that.”

Kumari can’t stay home because her children need medicine to help them function until the weather and air quality improve. She works morning and evening shifts, and because her husband, Sant Veer Kumar, works as an electrician, Kumari takes her infant son with her to work.

“I was paid extra money during recent festivals by my employer for working extra hours, and I couldn’t say no to work,” Kumari says. “My husband is a daily laborer, and we have to work hard to meet our needs every day.” 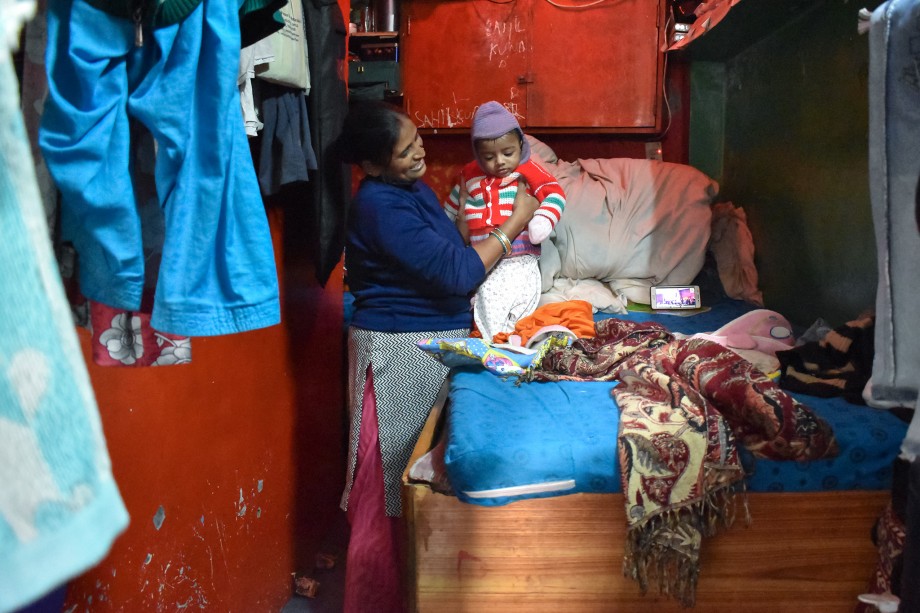 Babita Kumari and her 5-month-old son, Saurab, spend as much time as possible inside their two-room house in Delhi. But because she has no day care, Kumari must take him to her job as a domestic worker.

Kumari’s dilemma is typical in New Delhi, which has endured a globally recognized air pollution crisis for many years. The World Health Organization frequently lists the Indian capital among cities with hazardous air quality levels.

On November 1, the Environment Pollution (Prevention and Control) Authority (EPCA), India’s Supreme Court-mandated anti-pollution authority, declared a public-health emergency in Delhi’s National Capital Region (NCR). The pollution levels in the region were ranked in the “severe plus” category.

The ongoing emergency has taken a heavy toll. A paper released in 2018 by the India State Level Disease Burden Initiative, published in The Lancet, states, “Of the total deaths in India in 2017, 12.5 percent (1.24 million deaths) could be attributed to air pollution.”

In September 2019, officials announced that they would reintroduce a plan to control vehicular emissions by mandating that, in the busy days following the Diwali festival, cars with odd- and even-numbered license plates could only operate on alternate days. The plan was in effect from November 4-15, and the government announced in late November that it would be in effect permanently in 2020. In November, Delhi’s Chief Minister, Arvind Kejriwal, described the city as a “gas chamber” due to smoke and announced that 5 million pollution masks would be distributed to students across the capital.

Schools were closed, and construction work was stopped.

But these solutions haven’t eased concerns. A survey of 17,000 people who live in the Delhi NCR by the Local Circles, a private consultancy firm, found that 40% of those surveyed wanted to leave the region, specifically due to the administration’s inability to control pollution.

And a statement by Harsh Vardhan, the Union Minister for Health & Family Welfare, Science & Technology, Earth Sciences, only made matters worse. On November 3, Vardhan tweeted that people should eat carrots to avoid pollution-related harm, invoking widespread anger and criticism. 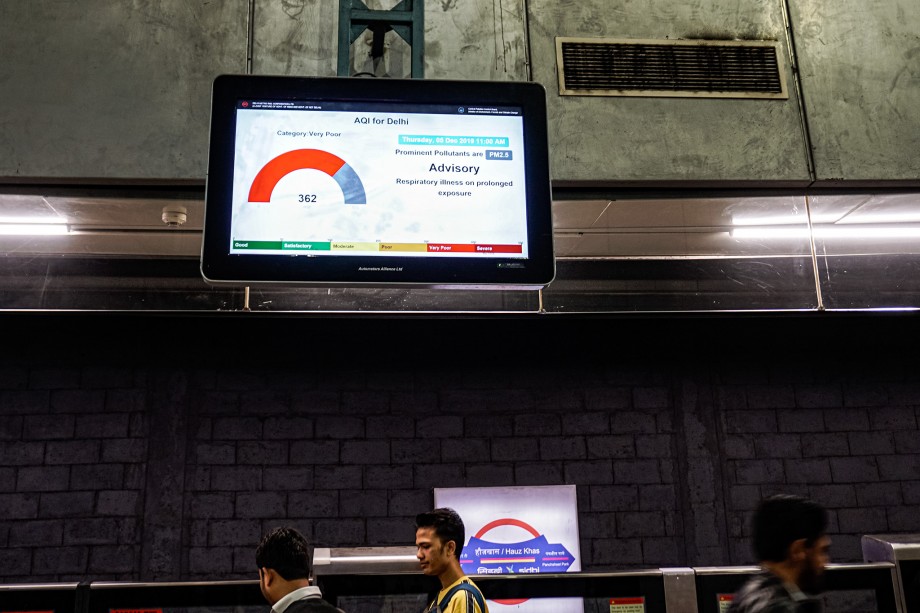 A television monitor displays the dangerous air pollution levels in Delhi. Officials declared a public-health emergency and closed schools at one point in recent months.

For the average citizen, options for surviving the pollution crisis are few. Faisal Khan, a pharmacist at Health Point Pharmacy, in New Delhi’s Okhla area, says that sales of cotton masks – made from medical anti-bacterial fabric with several filters – have sharply increased since October.

“We have a different range of masks available from 15 to 1000 (Indian rupees) (20 cents to $14), and we have sold at least 10 masks a day in the past more than a month,” he says. “People also complain of burning sensation in their eyes and buy eye lubricants.”

But Dr. Gyan Bharti, a pulmonologist at Columbia Asia Hospital in Ghaziabad, says the protection these masks offer varies. “Masks like N95 and Masks N99 also avoid the inhalation of particular materials. But then you must frequently change them after a week, which usually gets expensive for people,” Bharti says.

“Unfortunately, we don’t have any sustainable solutions available at the moment to combat hazardous pollution,” he says. “But if we can become a little responsible towards garbage burning, carpooling and planting trees at our own levels, we can contribute our little bit.”

But most people in New Delhi don’t have the luxury of considering sustainable and eco-friendly solutions to the air pollution crisis. Survival is their focus.

Ram Mati, 75, works as a domestic worker with ASHA Society, an organization in New Delhi, to support her husband and the two of their three children who live at home. Her husband contracted tuberculosis, which keeps him at home. Mati has battled a respiratory illness over the last two years.

“I no longer know what a healthy chest sounds like, as I cough all the time, especially when the air here is unbreathable,” she says.

Despite her illness, Mati, as the family’s sole earner, works as many shifts as she can get.

“The polluted air in New Delhi has become a part of our reality, like poverty,” Mati says. “It does affect our health, due to everyday exposure to it without any shield. But we can’t do anything about it other than not to thinking about it and carry on.” 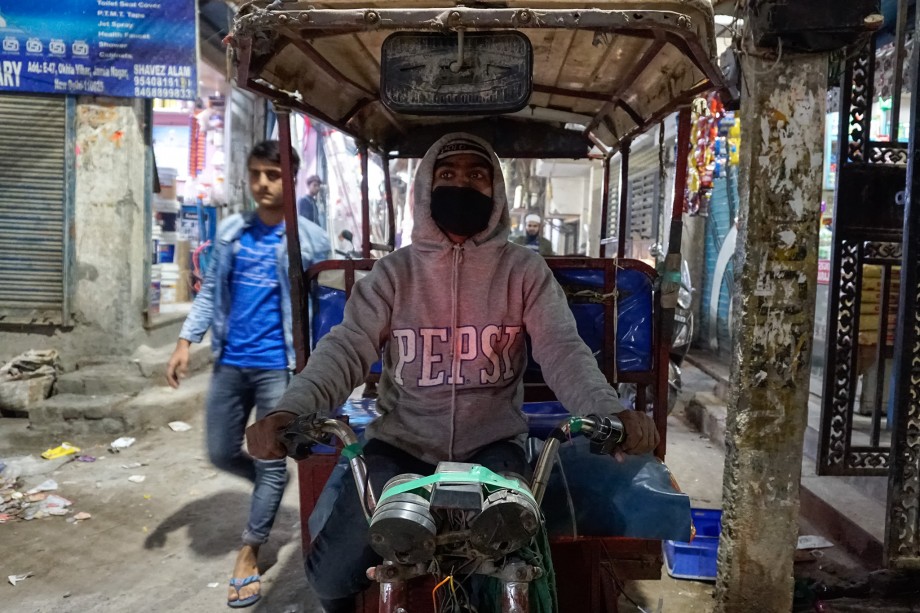 Mohammad Ahsan, an autorickshaw driver, says he has had a serious cough for more than a month and missed a week of work during Delhi's most recent air pollution crisis. He wears a face mask every day but can only afford a new one twice a month.

For the well-to-do, there are expensive options.

“The sessions are advisable to do once or twice a month,” says Irengbam. He admits that the bar is not a sustainable solution to the pollution crisis for the larger population.

Pulmonologist Bharti says air purifiers are only effective to a certain level and should only be used for a few hours at a time. Rising levels of exhaled carbon monoxide can make even purified air toxic, he says.

Ultimately, most people figure out a way to keep going, despite the daily challenges to their mental and physical health.

Babati Kumari and her husband don’t use masks, because she says they feel shy about wearing them. Her children refuse to wear the masks provided at school. Kumari thinks it’s a meaningless gesture anyway, because they don’t really block out the foul, smoggy air.

Besides, with a monthly income ranging from 8,000 to 9,000 rupees ($112-$126) and no savings, a regular supply of face masks for Kumari and her family is almost as much of a dream as going to an oxygen bar or having a unit at home to clean the air.

“We haven’t ever heard of air purifiers,” Kumari says with a sarcastic smile. “We are too poor even to dream of such facilities.”