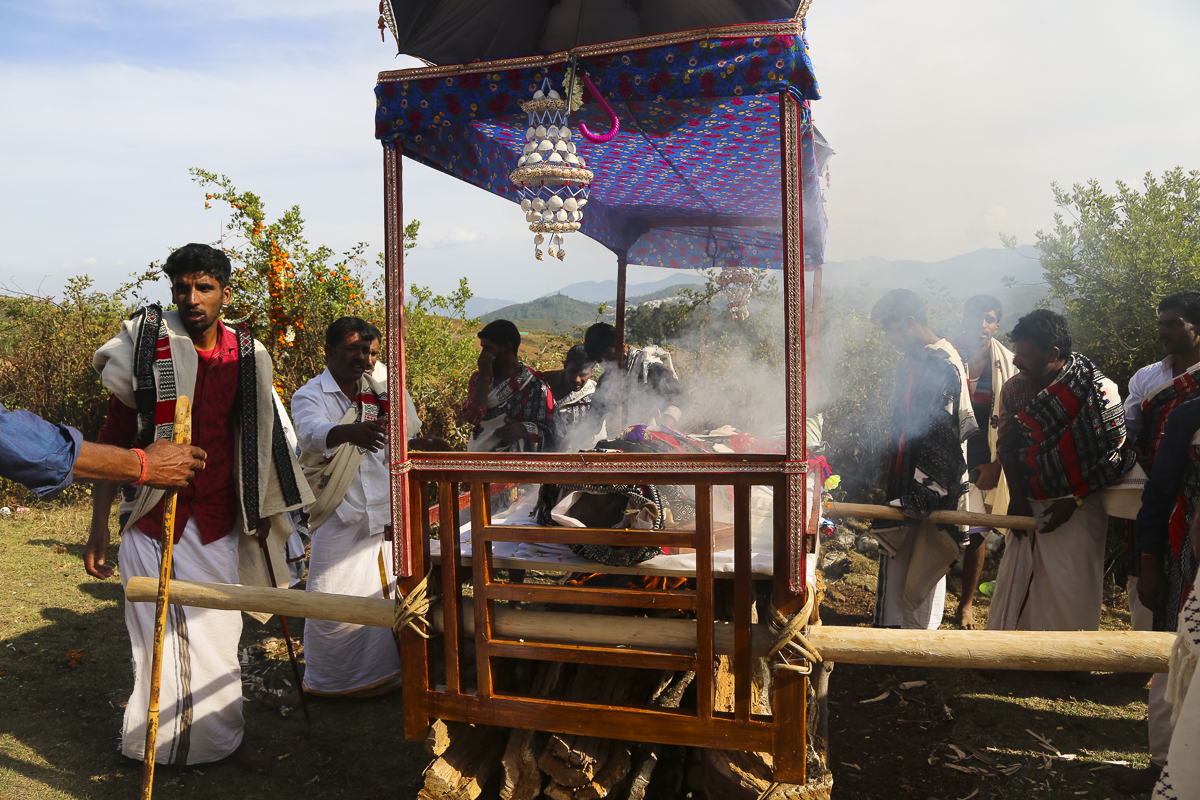 UDHAGAMANDALAM, INDIA — More than a hundred men and women gather on a hilltop in the Nilgiri Hills of Tamil Nadu, a state in southern India. They’re barefoot and each wears a white cotton-and-wool shawl embroidered in red, black and white. They gather around a small palanquin draped in flower garlands.

The people are from the Toda tribe, from the Karikadu Mund, a settlement near Udhagamandalam, and they’ve gathered for a funeral ceremony for Thees Gooden.

Gooden died at home after suffering a high fever. He didn’t have a birth certificate, but his family estimates that he was between 75 and 80 years old.

A funeral is a key cultural celebration for the Toda, whose traditions are at threat of slipping into history. The tribe was once nomadic, but as dams and other development changed the land, it settled into the Nilgiris district in Tamil Nadu. The tribe continues to graze buffaloes for income.

After that shift to pastoralism, the tribe grew from 714 people in 1961 to more than 2,000 in 2011, according to the most recent census taken in India. That 2011 census also found that a small group of 147 Toda people were living in Karnataka state, which borders Tamil Nadu.

INSIDE THE STORY: The Toda tribe in South India holds a sacred nature-inspired funeral for tribe members who have died. Outsiders are not usually allowed to participate, but a GPJ reporter was granted special access. Read the blog.

Carrying out the funeral rituals in keeping with the customs and traditions of the Toda people is important, according to Vasamalli Kurtaz, a Toda tribe member who, due to her graduate-level education, often negotiates with the government and other agencies on behalf of the tribe. Higher education is a rarity among the Toda, and some say Vasamalli, who goes by her first name according to Toda tradition, is the only tribal member to have completed it.

Gooden’s funeral has brought together members of the tribe, young and old, from near and far, Vasamalli says.

A Toda funeral is like a glue that binds the community together, says Thor Dey Gooden, 35, who attended the funeral.

“You can make excuses for other events, but you have to come to a funeral and also it’s a great chance to meet all the relatives who live far away,” he says.

Traditionally, the Toda have two funerals, several months apart, when someone dies. Both ceremonies incorporate elements of nature, Vasamalli says.

The first ceremony is named “Patchai Kedu” or green funeral. Among the many rituals is one in which one or two buffaloes are killed, after which the deceased’s hand is made to clutch the buffaloes’ horns three times. Once the rituals are completed, the body is cremated and buried so it decomposes to become one with nature.

The second funeral is referred to as a dry funeral, where a bone or some ashes of the deceased are used in the ceremony.

Vasamalli says the second funeral is rarely celebrated today, as it is based on individual family preferences. It’s not considered essential, she says.

Bala Subramanian is an environmentalist and a social worker who has lived near a Toda community for many years, and experienced their funeral ceremonies and other aspects of their culture.

“They are very nature-friendly,” he says. “The way they handle the dead body is not gruesome or unpleasant at all.”

In fact, he says, he admires Toda practices. 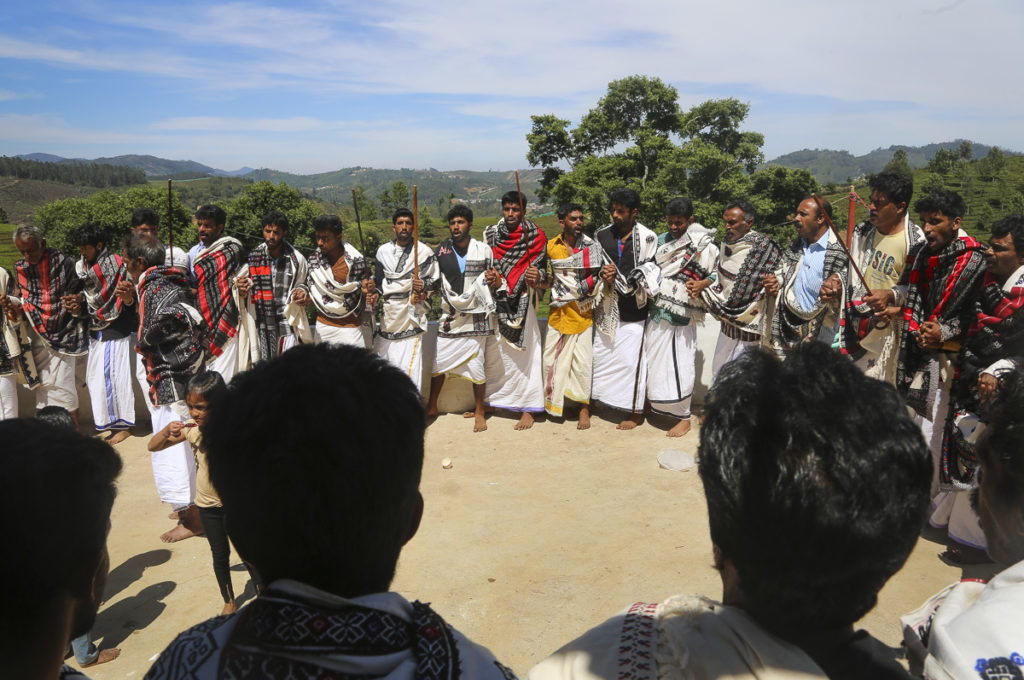 During a funeral ceremony for Thees Gooden, Toda men dance in a circle and sing about the deceased’s life and achievements. Funerals bring together the Toda community in the Karikadu Mund in the Nilgiri Hills of southern India. 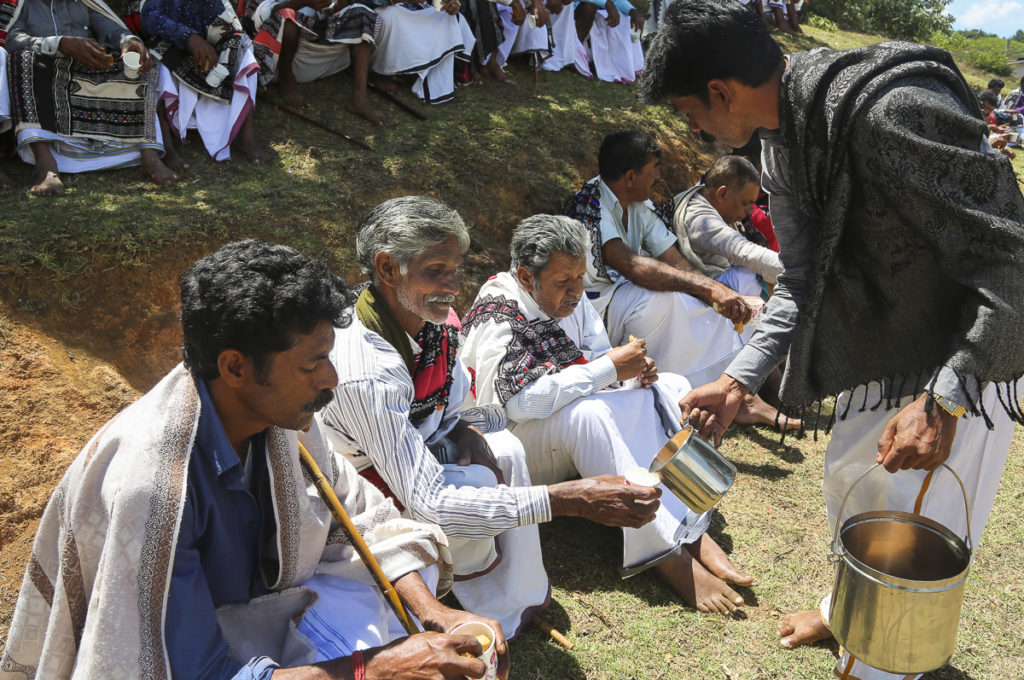 Men from Gooden’s clan offer refreshments to members of another clan during the funeral ceremony. The Toda tribe is divided into two clans. When a person from one clan dies, the other carries out the funeral rites. 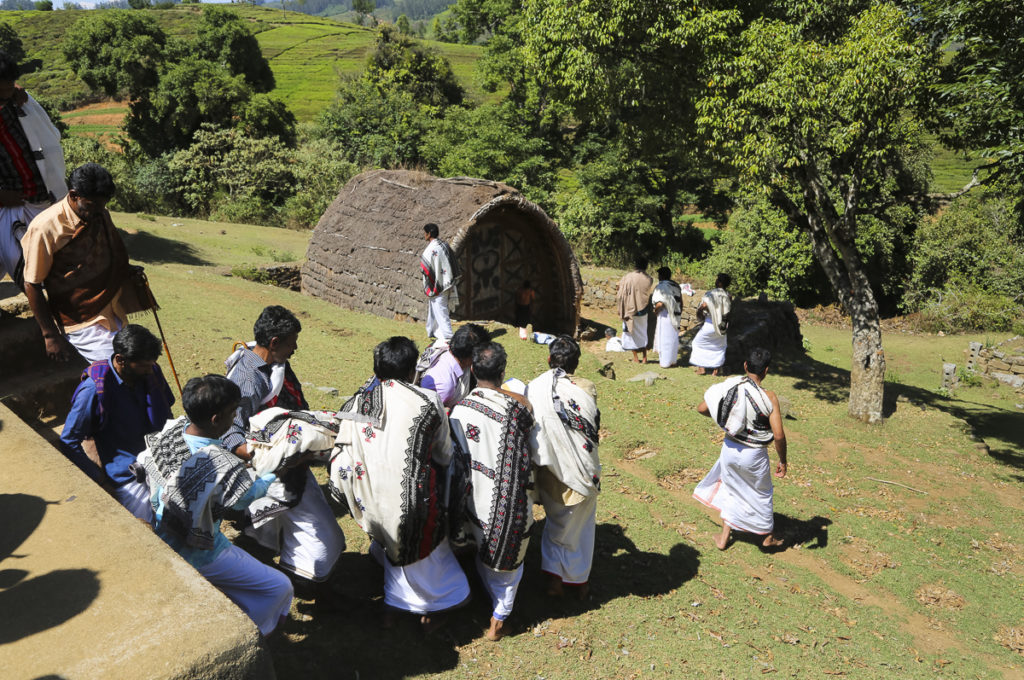 Toda men carry the deceased’s body to the temple to perform final rituals. Only Toda men are allowed near the temple. 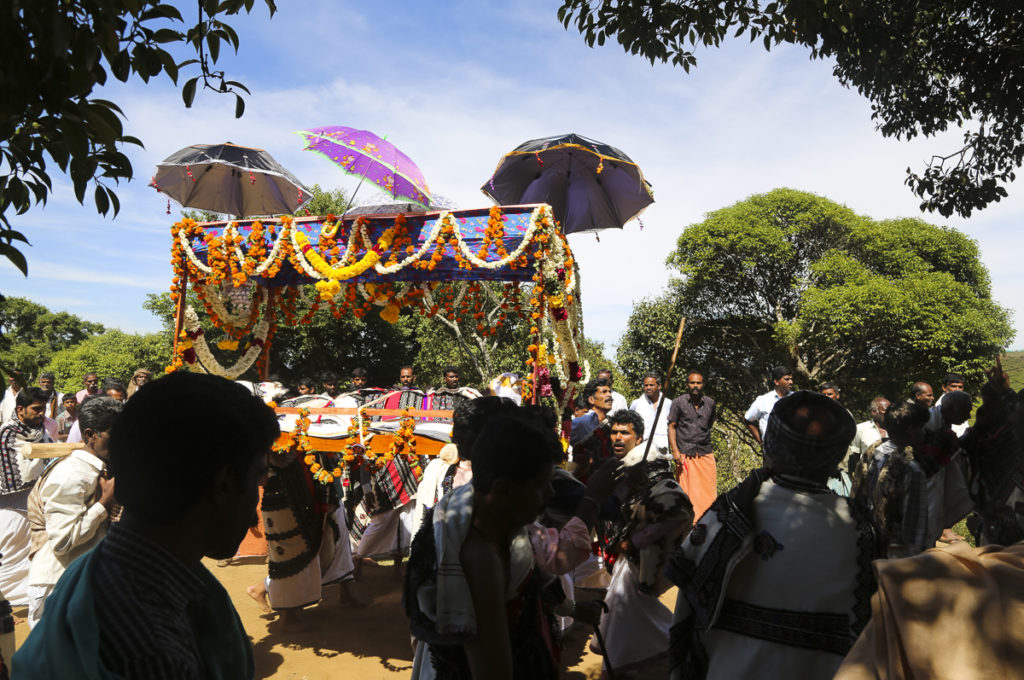 Men carry the deceased’s body to where it will be cremated. 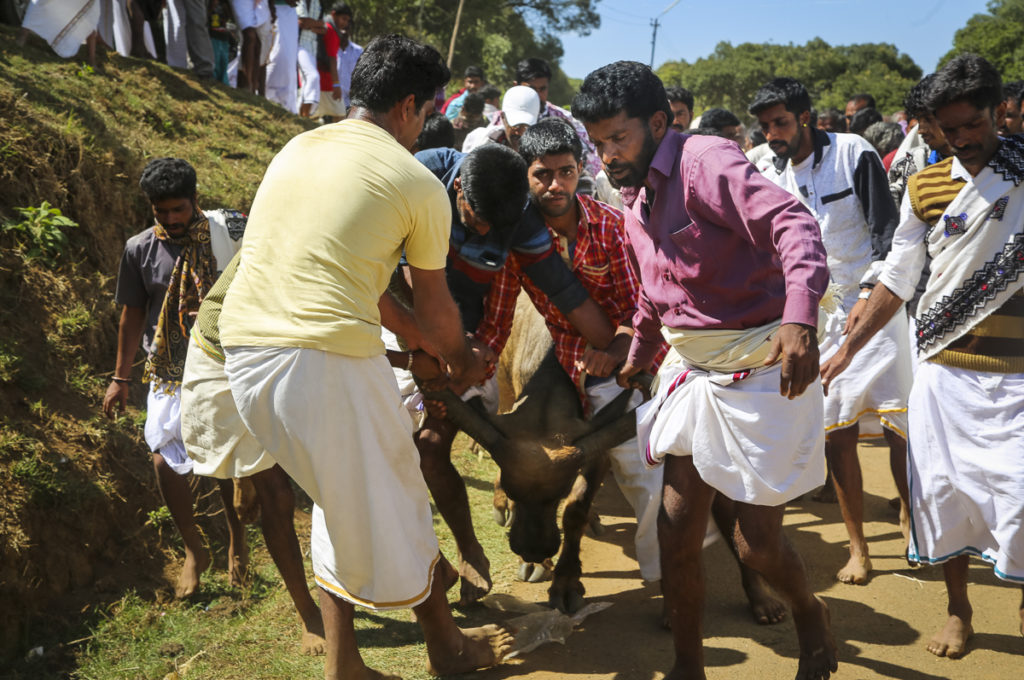 Men bring a buffalo, selected for sacrifice by a relative of the deceased, to the funeral site. Buffaloes are an important part of Toda beliefs and daily life. 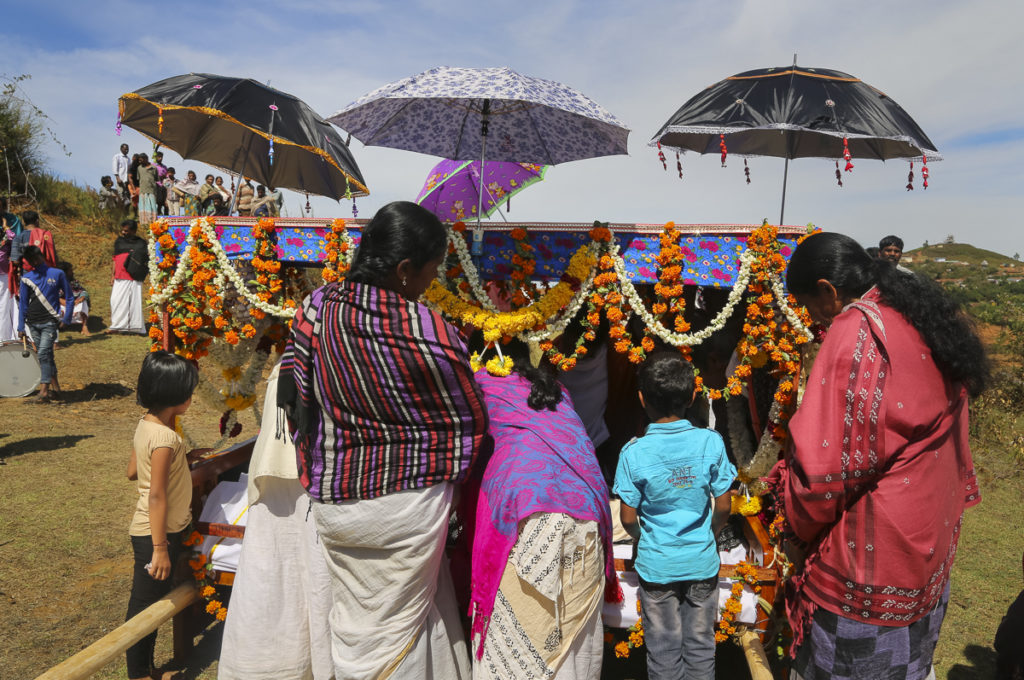 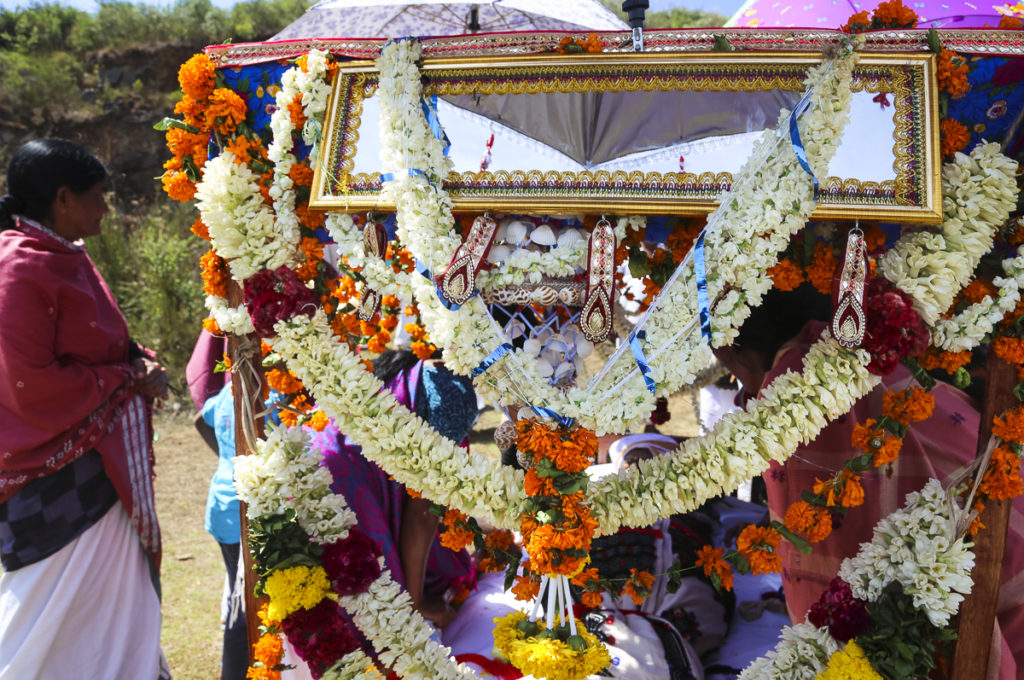 Women circle the palanquin, which is decorated in flower garlands. 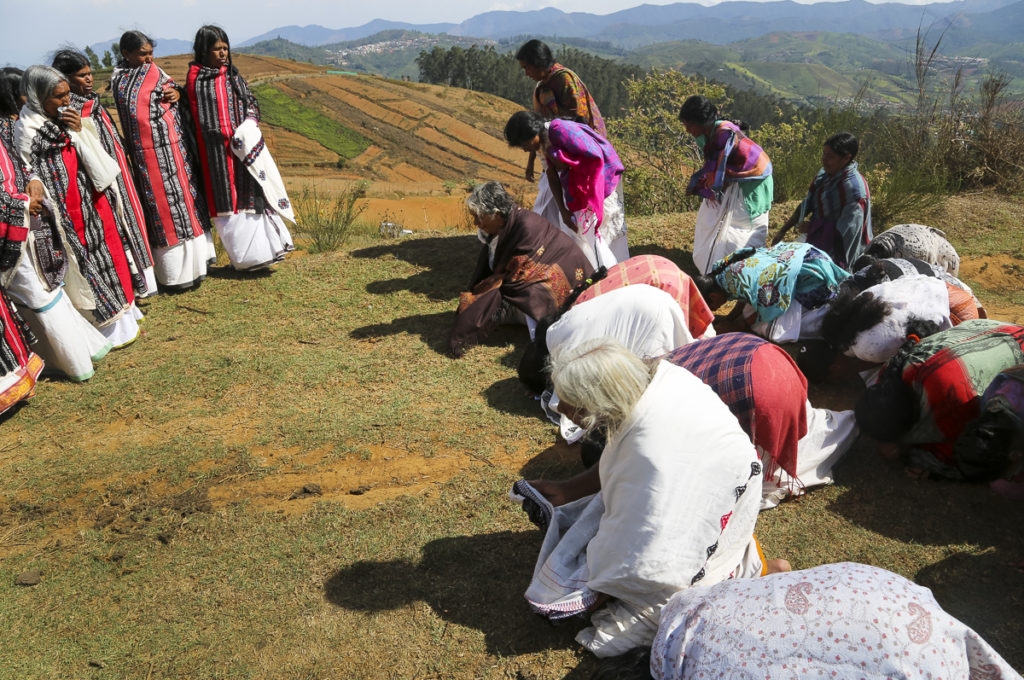 Men from the Gooden’s father’s family anoint the horn of the buffalo with butter before it is killed by a single blow to the head. Close male relatives salute the buffalo after its death. 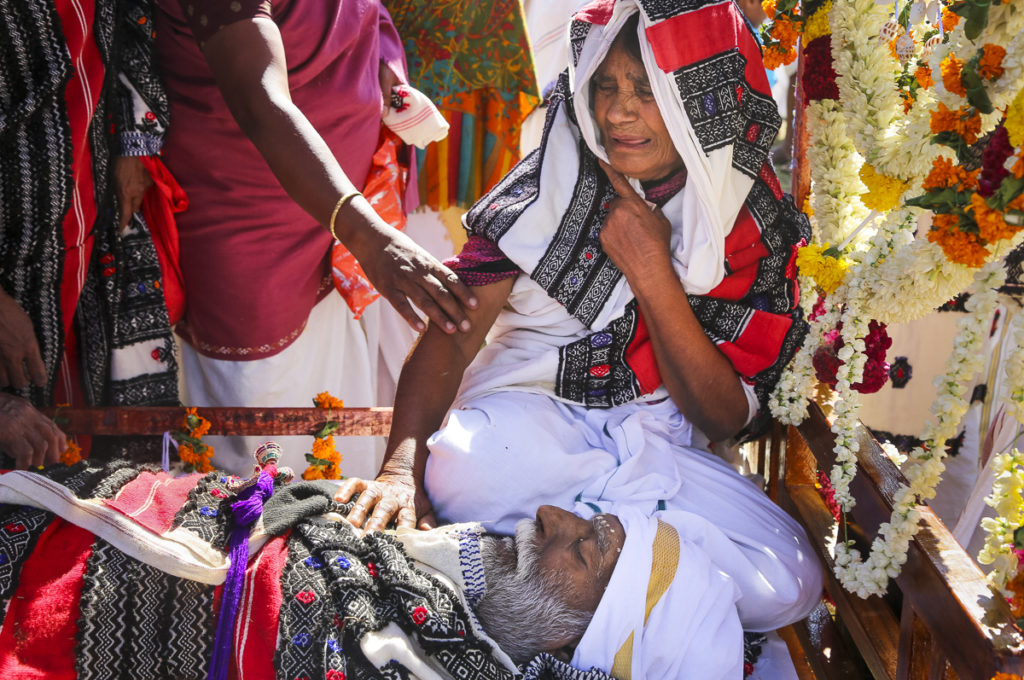 Gooden’s wife mourns her husband. The family estimates he was between 75 and 80 years old. 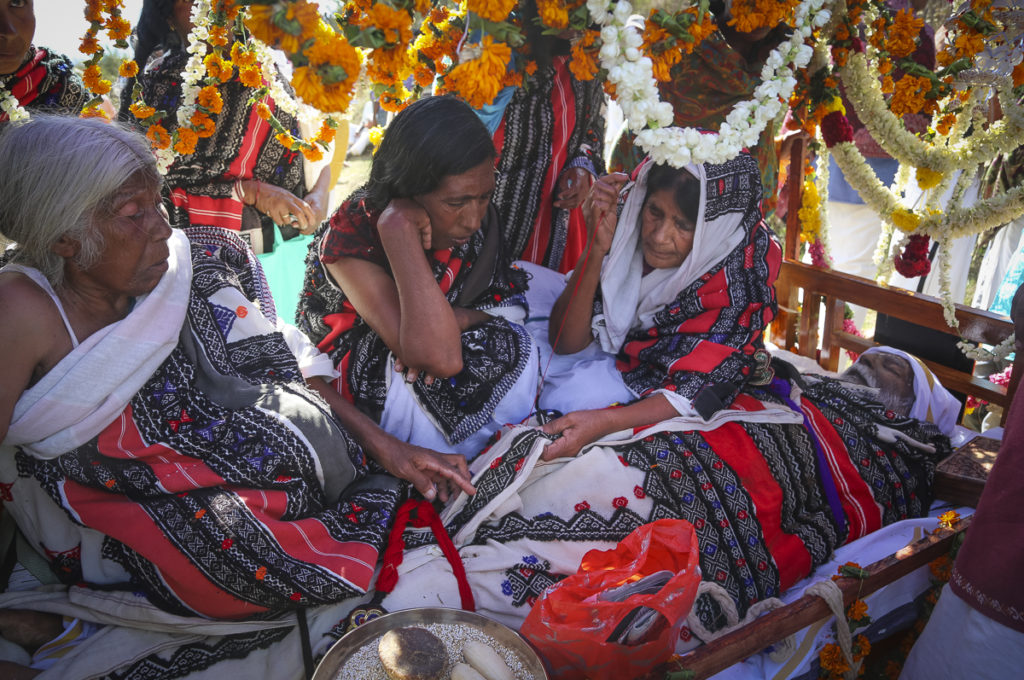 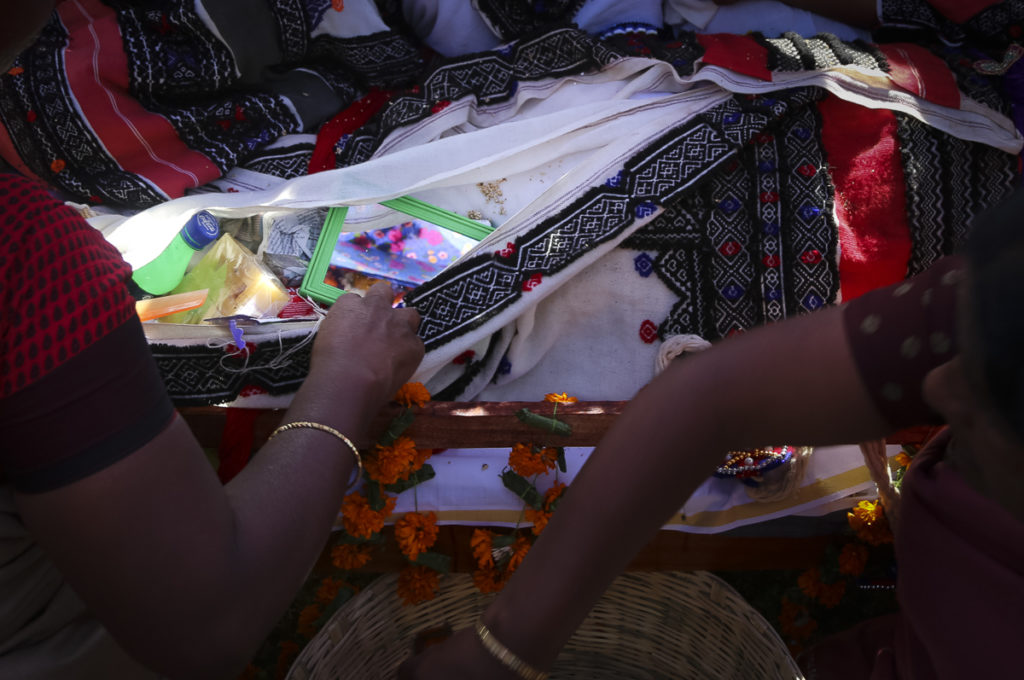 Gooden’s wife and sisters-in-law stow things they believe are necessary for his journey to the afterworld in his “poothkuli,” a hand embroidered shawl. Items include grains, milk, tobacco and a mirror. 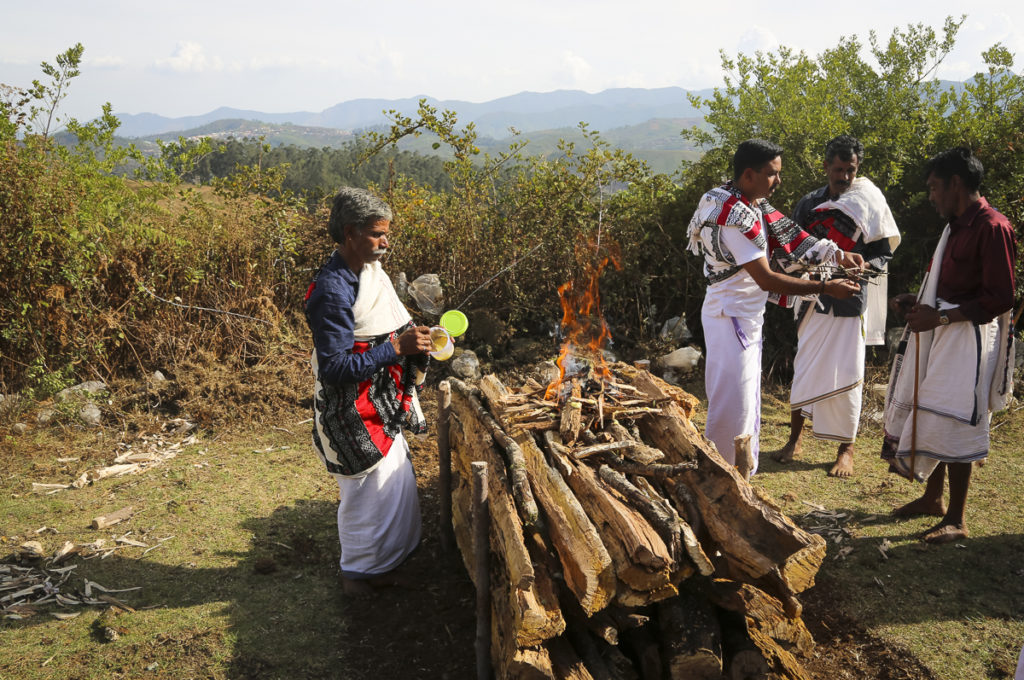 Toda men start the cremation fire from the top using a traditional method. Ghee is poured on the wood. 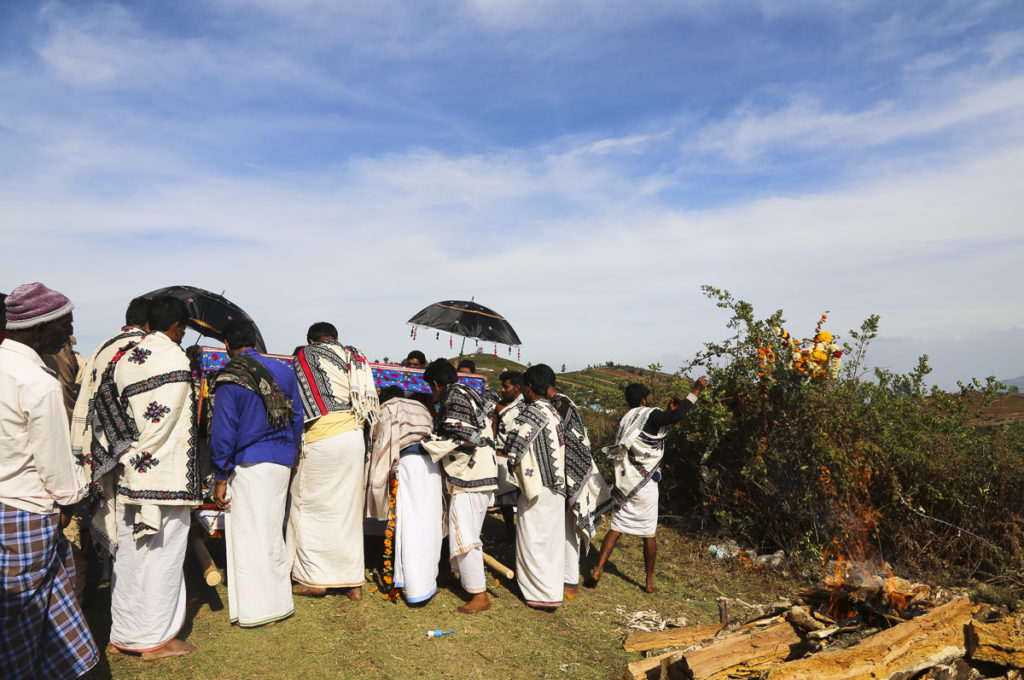 Toda men swing the palanquin holding Gooden’s body over the fire three times before setting it on the fire. 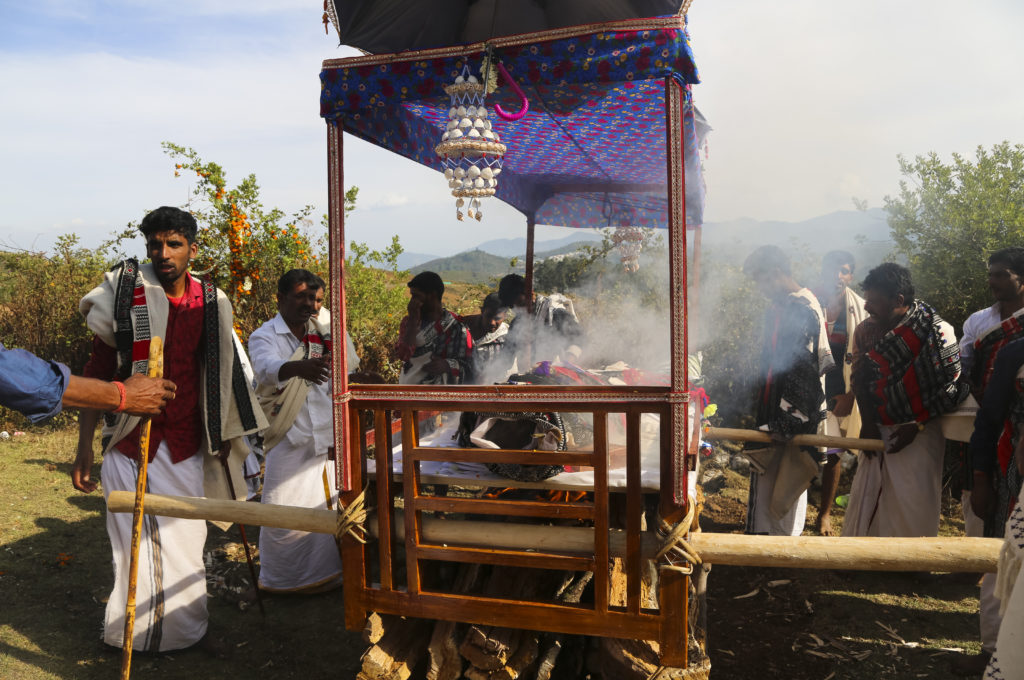 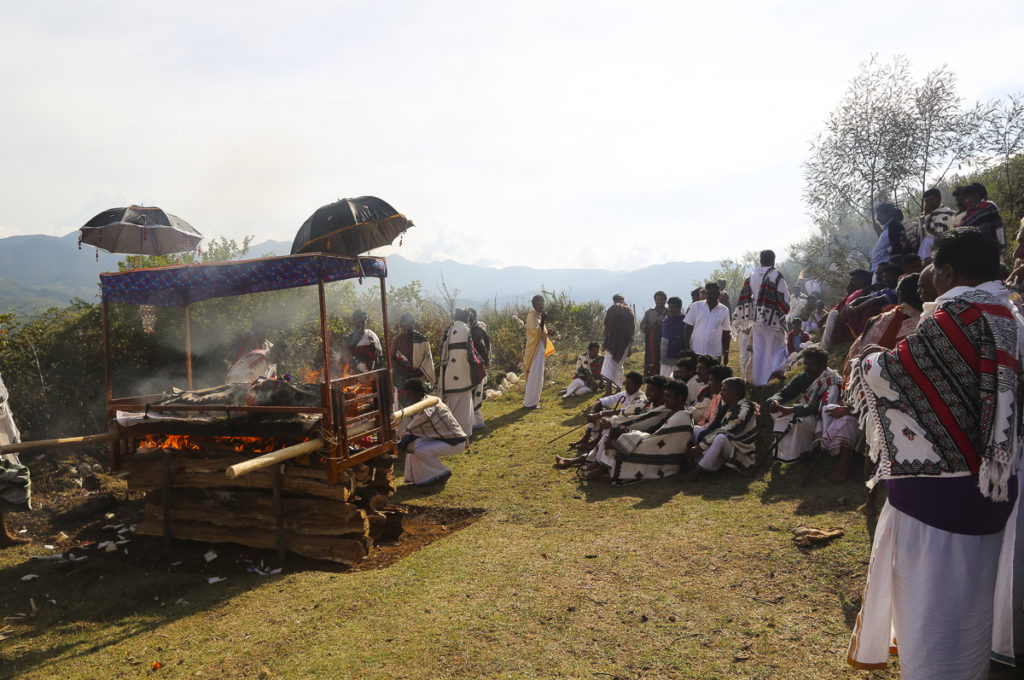 All members of the Toda tribe in attendance stay nearby the pyre initially. After some time, they slowly start to leave.

“On a personal level, as an outsider, I really admire and take some comfort in their funeral rituals,” he says.

The Toda people speak their own language, but that language doesn’t have its own script, Vasamalli says. Many of their history and cultural traditions are passed on orally from one generation to the next in the form of stories, songs and teachings, she says.

Toda religion is also unique to the community.

“We believe we were created along with our buffaloes by our Goddess Terkeshi,” Vasamalli says. “We don’t have other gods except Goddess Terkeshi whom we worship for our protection and health.”

But the Toda community’s nature-focused culture depends on the conservation of that nature. Vasamalli says she’s not sure how long traditional Toda funerals will be possible.