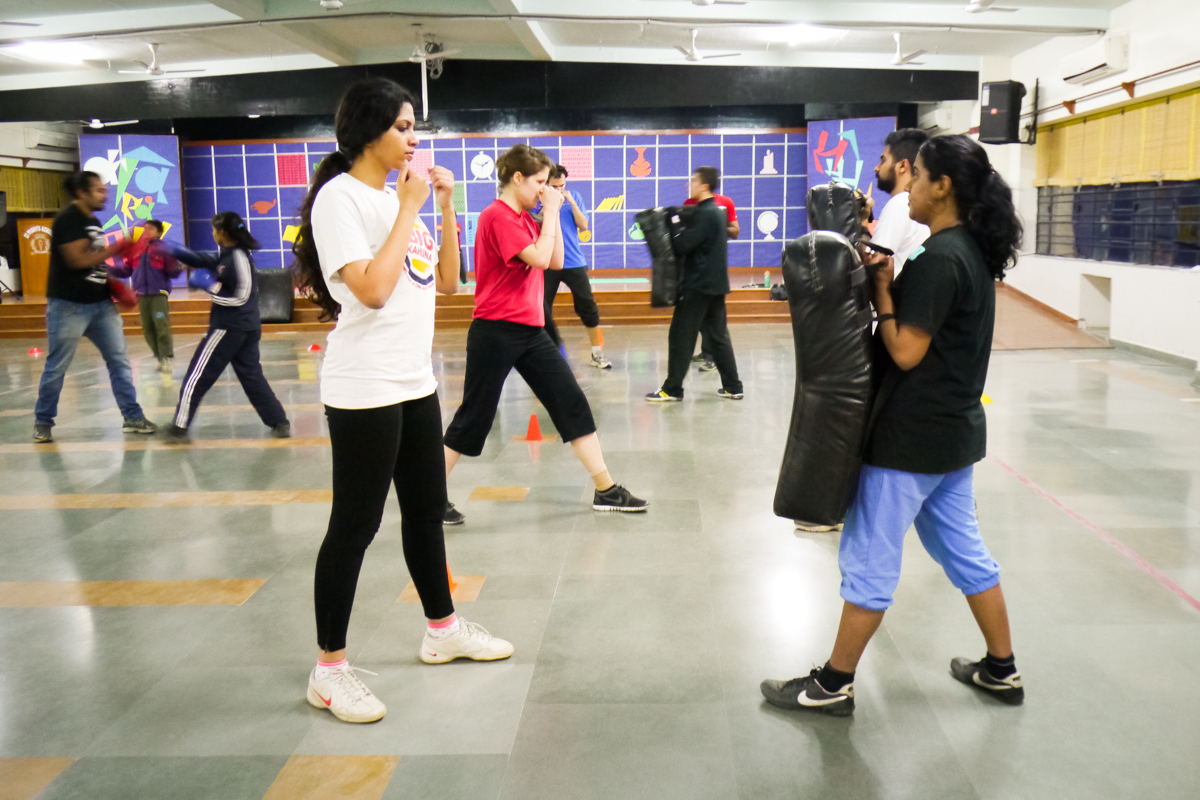 NEW DELHI, INDIA – Snehlata Sharma, 48, swiftly strikes a punching bag in a corner of the Martial Art Academy of India in Andrews Ganj, a suburb in south Delhi. She pants as she punches the bag with her red boxing gloves. On her trainer’s instructions, she keeps at it until she has delivered the 20th punch.

Over the past few years, New Delhi, India’s capital and the largest city in the National Capital Territory of Delhi, has been rocked by brutal rapes and other assaults against women in public places.

“I can now disarm an attacker by launching an attack targeting pressure points in the body,” Sharma says with a giggle. “I can even hit his sensitive areas.”

Sharma was moved to learn self-defense by something she witnessed on a bus. She saw a man grope and rub himself against the only other woman on the bus, a woman she took to be about 30. When the woman resisted and tried to move away from the man, he looked her in the eye as if expecting her to be silent, Sharma says. The woman then protested loudly.

The other passengers looked on without intervening.

“It was there that I got scared and thought about self-defense,” Sharma says.

She signed up for self-defense training three days later.

“Women face different kinds of harassment at public places,” Sharma says. “Be that Eve teasing, provocative comments on her dress or way of walking, or harassment, despite of any age group or any specific background.”

Eve teasing, a reference to the biblical first woman as temptress, is an Indian term for public sexual harassment or groping.

Sharma lives alone in the southwestern part of Delhi, 10 kilometers (6.2 miles) from her workplace in New Delhi. She travels mostly by bus and gets home about 8:30 p.m. The cost of the class, 1,000 rupees ($16) a month, is worth the feeling of security she is acquiring, she says.

“I am learning effective skills that are easy to learn and remember, and do not merely rely on physical strength or age bar,” she says. “It made me much less afraid.”

Violent sexual assaults have commanded public attention in recent years. In December 2012, a 23-year-old woman was gang-raped on a bus in Delhi as she returned home with a male friend. She and her friend, who was beaten unconscious, were thrown from the bus. The woman died of her injuries 13 days later.

All six of the assailants were arrested. Four adult men were convicted of rape and murder and sentenced to death; a fifth died in custody before going to trial. The sixth assailant, a teenager, was sentenced to three years in juvenile detention.

The brutal attack spurred protests across the country. In response, the government formed a committee to hear suggestions and recommend changes to the law and judicial system. An ordinance adopted in 2013 on the committee’s recommendation allows for the imposition of the death penalty for a rape conviction.

But rapes and other sexual assaults in public continue. An Uber driver is awaiting trial in the December 2014 rape of a passenger, a 26-year-old woman.

Not relying on the police to protect them, women are taking up boxing and other forms of self-defense.

Reported incidents of rape in India increased 35 percent from 2012 to 2013, according to the National Crime Records Bureau.

In Delhi, 1,636 rapes were reported in 2013. That means about four women were raped every day in Delhi.

In 2014, the number of reported rapes in Delhi increased to 2,166 – nearly six a day, says Rajan Bhagat, Delhi police spokesman.

It is difficult to say whether the number of rapes is rising or women are reporting rape at a higher rate, Bhagat says. Some women still refrain from reporting rapes because they fear stigma and lack support from family and society.

Nearly one in four men in Asia Pacific admitted to having committed a rape in a 2013 study by Partners for Prevention, a United Nations regional joint program to prevent violence against women and girls in Asia and the Pacific.

Worldwide, 35 percent of women have experienced either intimate partner violence or non-partner sexual violence, according to the World Health Organization.

Many of these centers have introduced self-defense classes since the notorious 2012 gang rape, Sharma says.

India is going through a critical stage of sexual violence against women, as shown by an unprecedented nationwide surge in the number of rapes, says Ranjana Kumari, director of the Center for Social Research, a nonprofit institution for the empowerment of women and girls in New Delhi.

Kumari believes India’s culture is partly to blame for the rising violence.

“The biggest challenge that needs to be addressed is the persistence of the patriarchal norms and the chauvinistic mind-sets,” she says.

According to a 2012 survey conducted by the International Center for Research on Women, nearly 75 percent of the 2,000 female respondents said they had faced sexual violence in their own neighborhoods in New Delhi.

Nine out of 10 had experienced sexual aggression or violence in a public space in their lifetimes. Women face high levels of sexual harassment at public transit sites, including roadsides and buses, the survey found.

Ritika Sharma, a 29-year-old human resources manager in Noida, a city in the National Capital Region, says there is no place where she feels safe.

“I don’t feel safe even in my own car or even my workplace,” she says. “Wherever there are men, there are chances of facing violence in one or other form.”

“There are disturbing attitudes in the form of economic as well as sexual frustration among youth,” he says. “The emotional response is often poured open on the opposite sex due to rising poverty, illiteracy, population explosion and unemployment.”

Among Indians ages 18 to 29, the unemployment rate in 2013-2014 was nearly 13 percent, according to a Ministry of Labor and Employment report.

In the same age category, up to 28 percent of Indians with higher education degrees were unemployed, according to the report.

The surge in violence has alerted the women of New Delhi to guard themselves, Kumari says.

“Women are becoming more confident than ever in reaction to what they face,” she says.

Before the 2012 gang rape, women considered themselves weak, Kumari says. But those who learn self-defense grow confident of their ability to escape harm.

“Feeling of freedom is extremely important for women,” she says. “Self-defense training is one such facet where women feel free to defend themselves.”

Women of all economic and social backgrounds are vulnerable to attack, but affluent women are most apt to train in self-defense, Kumari says.

“Usually educated, middle-class women are more empowered, along with their family support, independent nature and education backgrounds,” she says. “They are also aware of their rights.”

Women from lower economic backgrounds often do not have the support of their families to learn self-defense or fight for their rights, Kumari says. They tend to shy away from situations that might subject them to stigma.

Women who study self-defense also acquire the confidence to report rape and other forms of violence, she says.

For the past three months, Ritika Sharma has been taking kick-boxing, boxing and basic self-defense training at Invictus.

She feels physically and emotionally strong. And she has let her co-workers know it.

“I have told everyone in the office that I am learning boxing,” she says. “So, any male colleague would think twice before approaching me with any negative attentions.”

Invictus has trained about 200,000 people in Delhi over the past 12 years, Ankur Sharma says.

“In the beginning, we had a 10-to-2 ratio for men and women,” he says. “But, following the increase in incidents of violence against women during the last three years, the ratio has increased to 10-to-6.”

At Invictus, about eight students perform boxing steps together and then engage in mock fights with two trainers. The trainers show them how to respond to various forms of aggression.

Finally, the trainers show students how to fight off attackers using handbags and other belongings, and how to raise a public alarm.

“Women also need to take some preventive measures,” she says. “Like dressing modestly in public places and avoiding vulnerable situations like going out alone late at night or trusting strangers blindly. That can make things easier.”

Any woman who works late should avoid deserted or poorly lighted streets and be ready to phone the police, Abha Sharma says.

“One has to be extremely cautious and can’t merely rely on physical fights,” she says.

Ritika Sharma, however, says daylight and modest clothing do not necessary prevent attacks.

“There are innumerable incidents of rape incidents that have been reported by media where women were wearing simple clothes and were even school-going children, but still they were molested,” she says.

The crime has more to do with the criminal mind-set of the attacker, she says.

The Delhi Commission for Women sees self-defense training as a positive trend. It plans to introduce training for female students in schools and colleges beginning in mid-2015, Negi says.

It also plans to train men to respond sensitively to reports of sexual harassment, and to speak out against violence. It will teach men to challenge the attitude that women bring violence on themselves by dressing provocatively or living independently.

“Delhi should be a safe place to live for both men as well as women,” Negi says.

“Without expecting others to rescue us, we have to fight for our own rights, if we want to walk free without any boundaries,” she says.