AGUADILLA, PUERTO RICO — Over half a century has passed since Domingo Cortés got the call that changed his life.

At the age of 22, while expecting his first child and training as an X-ray technician, he received orders to report for duty in the United States Army. He obediently left for the Southeast Asian jungles, 10,000 miles away from his 10-day-old son.

“When I returned, he was already 1 year old,” Cortés says.

He came home in 1968, wounded and with a Purple Heart medal, a military honor for those killed or injured in action. He knows he was lucky to make it back alive — unlike the 345 Puerto Ricans killed in the conflict, some of whose tombs he visits as a volunteer at the Atlantic Garden Veterans Cemetery in Aguadilla on Puerto Rico’s northwestern edge. But the post-traumatic stress disorder from his combat experience still plagues him, decades later.

Cortés was among an estimated 48,000 Puerto Ricans who fought in the Vietnam War, a conflict that involved more than 2.7 million U.S. troops before the U.S. draft was abolished in 1973. This aging population now battles PTSD and the region’s lack of long-term inpatient mental health facilities, which means they must navigate bureaucracy and delays, and travel to Florida and other states for long-term treatments at U.S. Department of Veterans Affairs (VA) medical centers.

After years of advocacy by the local chapter of the Vietnam Veterans of America and other organizations, construction of a new facility is underway in San Juan — a victory for the region’s younger veterans, as well.  Scheduled to open in September 2023, the VA Heroes Domiciliary will have 40 beds for patients experiencing mental illness, homelessness, drug addiction and PTSD. At this type of residential rehabilitation facility, the first of its kind for the region, the average stay is three to six months long, according to the U.S. Department of Veterans Affairs.

This facility is part of a series of efforts to improve mental health care for the more than 66,000 U.S. veterans enrolled in the system in Puerto Rico, about one-third of them from the Vietnam War era. The VA Medical Center in San Juan, Puerto Rico’s capital and largest city, serves over 18,482 Vietnam-era veterans, including 6,291 mental health patients, according to data provided by the VA. 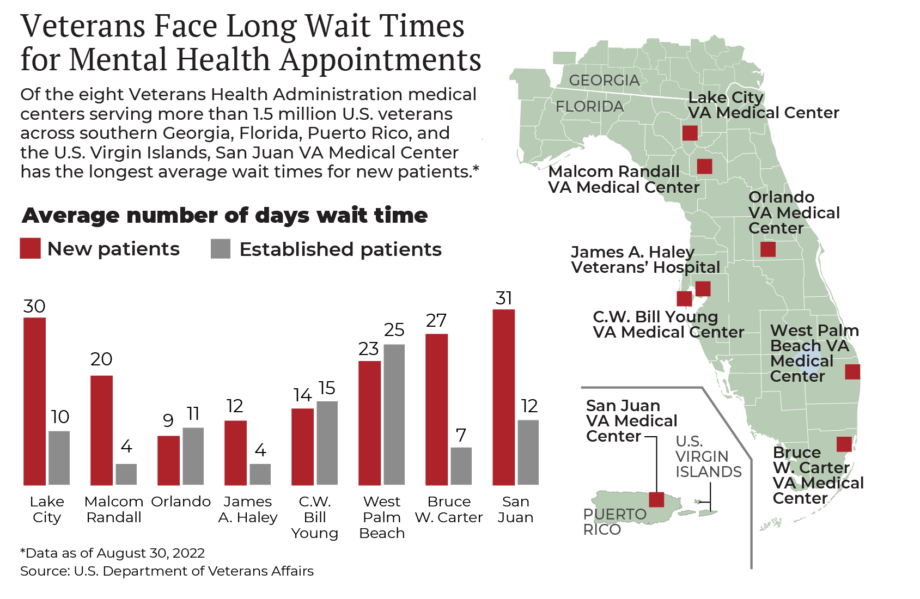 For mental health services, the demand is nearly double what the system can provide. On Aug. 30, 2022, patients had to wait an average of 12 days — 31 days if they were new — for a mental health appointment at the San Juan VA Medical Center. Since October 2021, at least 122 mental health patients have received long-term care treatment in facilities outside of Puerto Rico, according to data provided by the VA.

Progress can’t come fast enough for patients and advocates like Jorge Pedroza, head of Puerto Rico’s Vietnam Veterans of America chapter, who has fought for decades for access to health care that his peers get in the 50 states. In 1992, he helped win a successful lawsuit against the VA to restore federal disability benefits for neuropsychiatric conditions; he is now involved with a resolution to demand eligibility for TRICARE Plus, a premium health insurance plan offered to veterans elsewhere in the United States.

“We went to the same war, we wore the same uniform, we went through the same traumas,” Pedroza says. 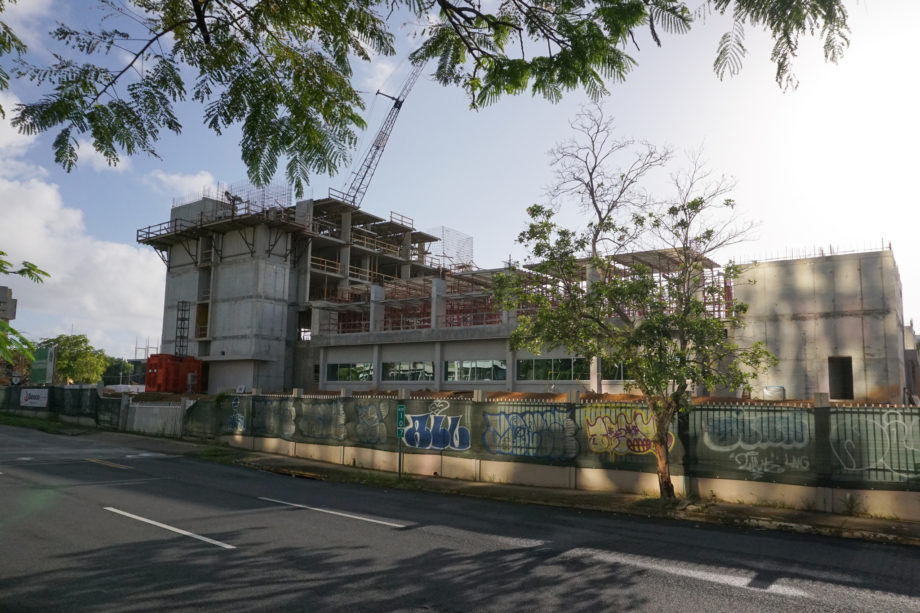 Pedroza, who served as an infantryman and paratrooper in Vietnam, says he had been eager to follow the example set by his father, a World War II and Korean War veteran. But even a family legacy could not prepare him for the psychological toll of his own experience, he says.

“Vietnam was a very aggressive and stressful thing,” he says. “A year in Vietnam was a lifetime. When I came back, I felt like a 40-year-old man.”

As with Vietnam veterans across the United States, those who came home to Puerto Rico faced social stigma and employment discrimination over having fought in an unpopular war, prompting many to avoid talking about their service for years.

Studies estimate that close to one-third of Vietnam veterans have experienced PTSD. A 2016-2017 study of Vietnam veterans, published in March 2022 in the Journal of Traumatic Stress, concludes that the mental health effects of their wartime experience have persisted over the decades — and “Hispanic participants showed significantly higher odds of reporting of PTSD, depression, psychological distress, and lower MCS [mental component summary score] compared with White participants.” 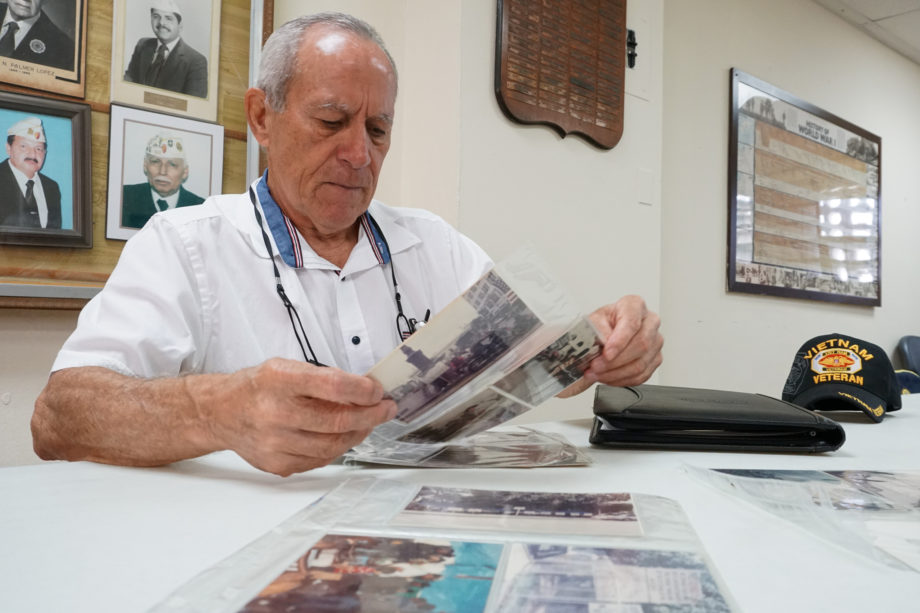 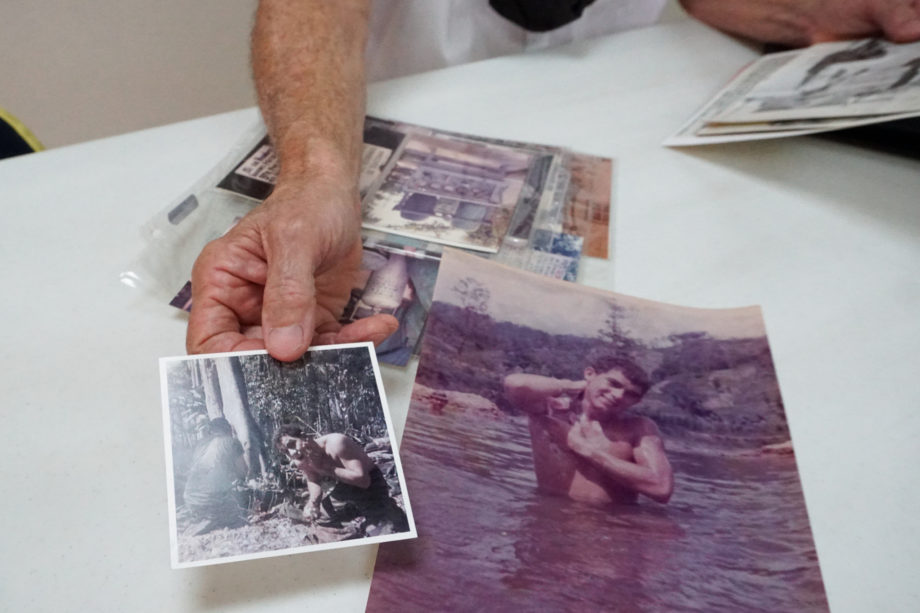 Jorge Pedroza, head of Puerto Rico’s Vietnam Veterans of America chapter, reflects on his service during a meeting at the American Legion office in San Juan.

Carmen Rosario was a 19-year-old newlywed when her then-husband left for Vietnam in 1972. The man who came home felt like a stranger.

As she raised their three children, she says she could only watch helplessly as he struggled with combat-related hearing loss, then a drug addiction that led to their divorce.

“He was a more aggressive person. … He was angry with the whole world,” she says, adding that he refused to discuss his trauma with her or seek psychological help. “He didn’t want anything more to do with the Army.”

Now a veteran herself, an enlisted military nurse serving as the first departmental commander of the American Legion in Puerto Rico, Rosario says lack of access to mental health services is a crisis throughout Puerto Rico and the United States. “Everyone here needs mental health treatment, not just us veterans,” she says, although she agrees that Vietnam veterans were disproportionately stigmatized. 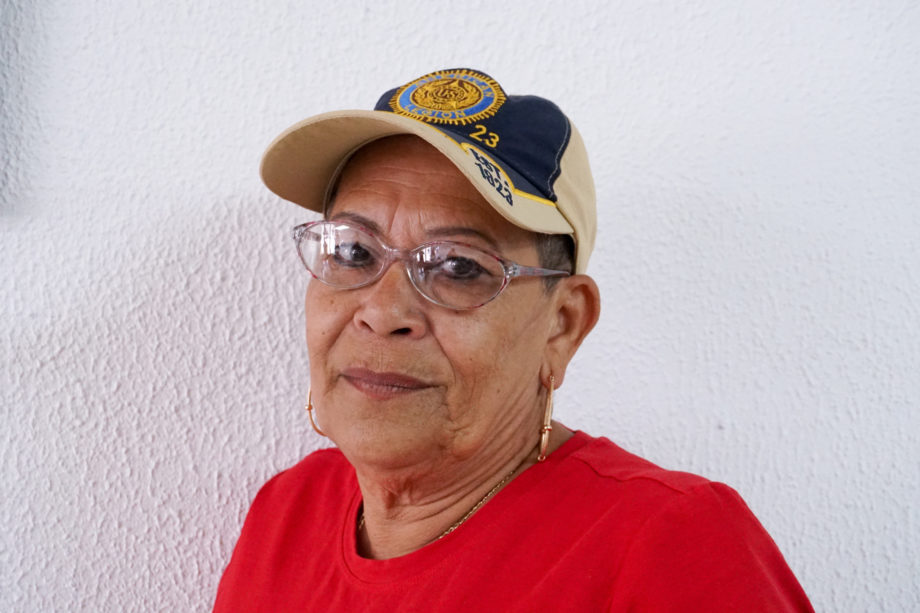 Once married to a Vietnam veteran who refused to talk about his combat trauma, Carmen Rosario enlisted as a nurse at the age of 40 and now serves as the first departmental commander of the American Legion in Puerto Rico. 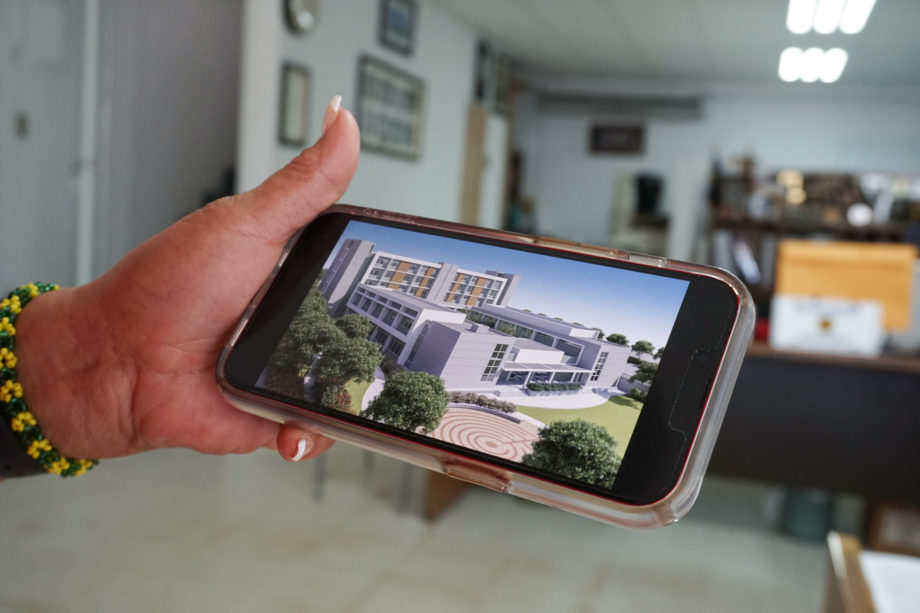 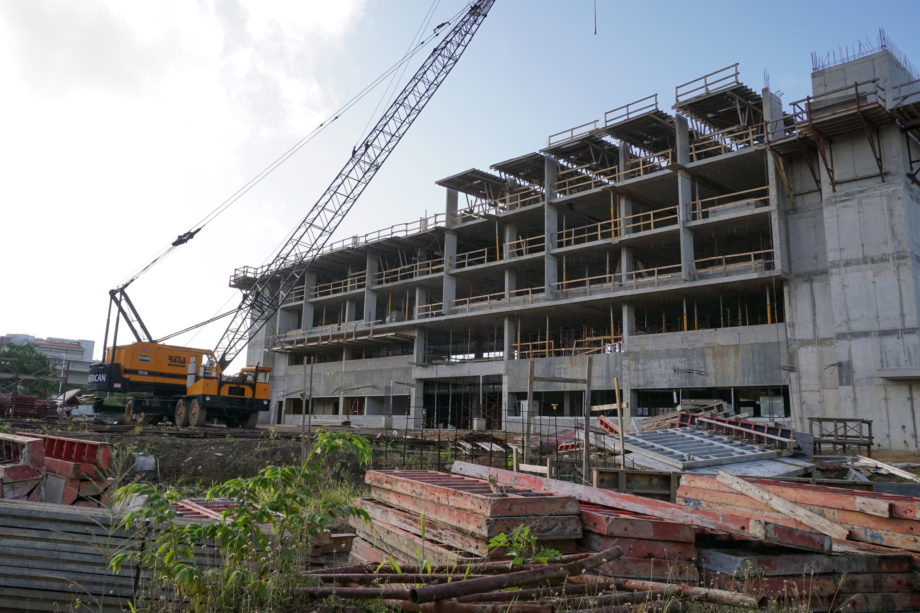 Without local counseling options geared toward veterans, many tried to bury their trauma as best they could — only for it to roar back to the surface years later.

“They only sent us to the hospital, to the psychiatrist, because there was no psychologist. And so it was, ‘Give him medication,’” Cortés says of his attempts to get treatment after returning from Vietnam.

In 2011, Cortés suffered a PTSD relapse; the VA sent him to a facility in Florida, where he was hospitalized for seven weeks. While he completed his treatment cycle and returned home in better health, other veterans from Puerto Rico cut their stays short due to the stress of being so far from their support systems.

“We are sending them to places that are far from their country and far from their families,” Arroyo says. “If we kept them here, we could facilitate their integration into the community more.” 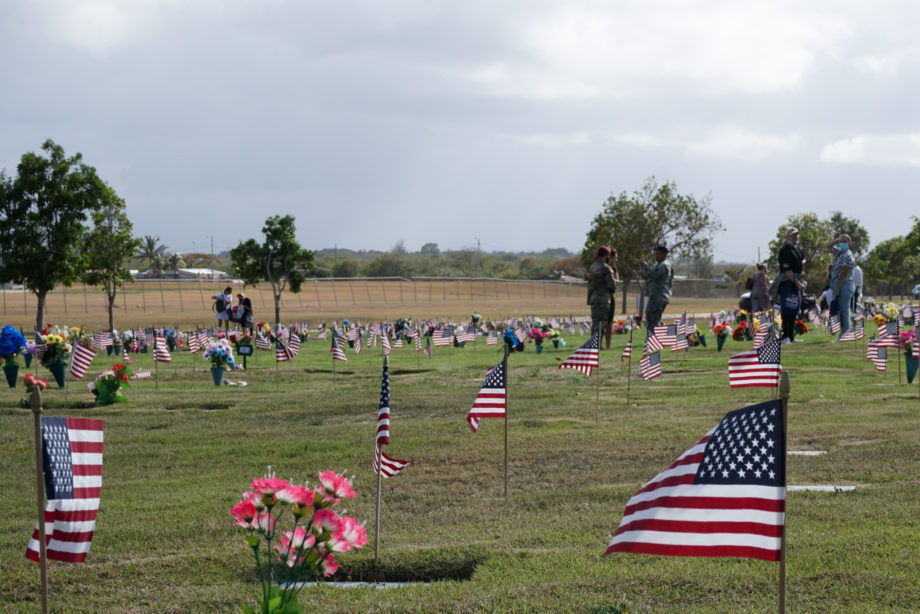 U.S. flags fly during a Memorial Day ceremony at the Atlantic Garden Veterans Cemetery in Aguadilla earlier this year.

Frankie Pérez, 42, a U.S. Army veteran, agrees. His own struggles with PTSD — including an eight-week stay in a Florida clinic — inspired him to found the Post Traumatic Art Foundation, Inc., a volunteer organization that offers art therapy activities for veterans across Puerto Rico.

“We need these types of facilities here in Puerto Rico so there can be fewer families destroyed, fewer suicides,” he says.

One belief comforts Cortés as he visits the military cemetery: His generation has blazed a trail with their demands, making sure that today’s veterans have better access to the mental health care that can help heal their hidden wounds.

“It has changed. Now, there are different types of therapy. It’s not all pills,” he says. “That’s something that the new veterans are benefiting from — something that we Vietnam veterans have achieved.”