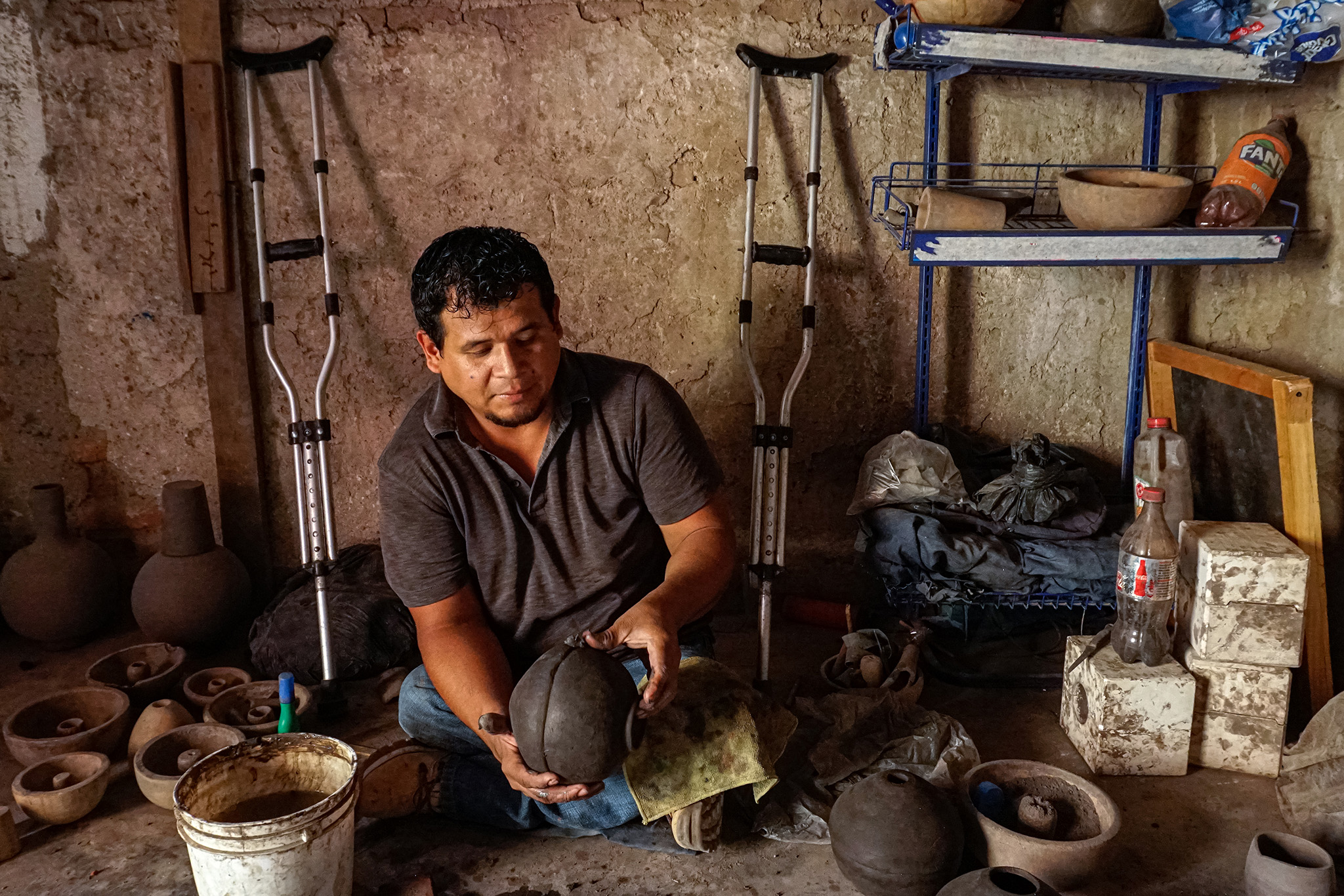 TONALÁ, MEXICO — Ismael Fajardo Díaz sits on the floor of his small, tidy house one afternoon to work on the last collection of his ceramic pottery for 2020, using a technique that features burnished cinnamon-colored clay, intricate designs and terra cotta colors. His plum-cheeked, 3-year-old son stands at his side, shaping the balls of clay.

The technique is known as “barro canelo” — literally, cinnamon clay — and it dates back thousands of years to pre-Hispanic times. Fajardo, who lives in the El Rosario neighborhood in the municipality of Tonalá, hails from a long line of barro canelo potters.

“I was reminiscing about it with my great-uncle Fidel, and we got lost in the seventh generation,” says the handsome, friendly artisan. “There are more, but we don’t remember the names. There are several historic families here in El Rosario.”

But it may all end with his generation.

Traditionally, barro canelo potters use clays from local soils in neighborhoods like El Rosario. But the expansion of nearby Guadalajara, one of Mexico’s largest cities — nearly 16 kilometers (about 10 miles) northwest of Tonalá — has gradually buried the area’s clay banks under cement. 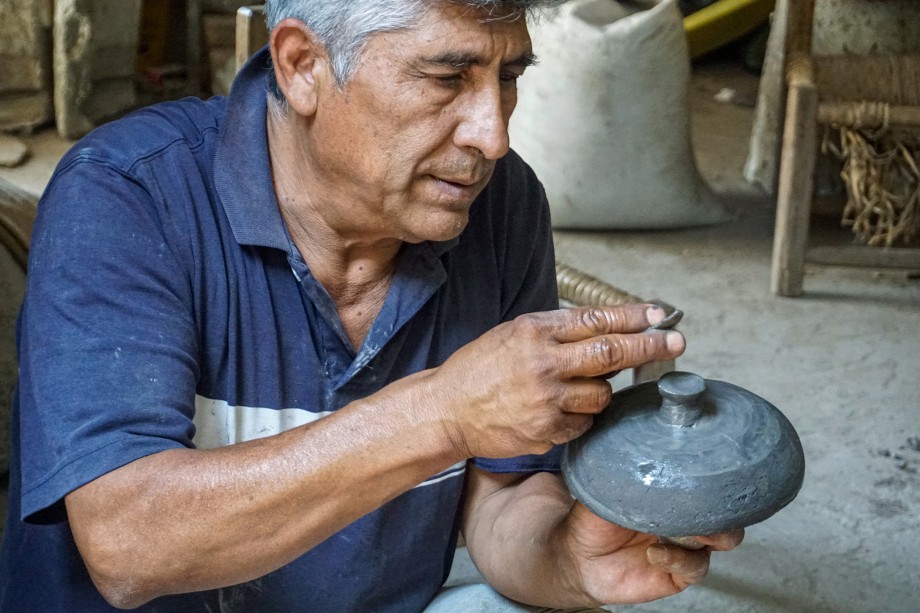 José Isabel Pajarito, one of the most recognized barro canelo potters, uses a hump mold to create this clay piece. Pajarito, sitting on the floor of his home workshop, places a piece of clay on the mold and, while holding it with one hand, he uses the other to hit it until it forms the desired shape. Then he smoothes it with a river stone.

The growth that endangers the generations-old livelihood of barro canelo artists spotlights the quiet but profound losses that sometimes accompany urban progress.

“The [clays] are running out, and that’s the point in which my lineage will be cut,” says Fajardo, 39. “My son is 3 and might be able to work on it some, but not as much as he’d like.”

Urban development of Tonalá, in Jalisco state in western Mexico, began with the expansion of Guadalajara. In the 1970s, Tonalá saw its population skyrocket by nearly 112%. Even then, experts noted that the flexible clay used by barro canelo artists was being covered, according to the Mexican government’s Cultural Information System.

As Guadalajara grew in the 1970s, many of the metropolitan area’s communal lands — property owned and used by local communities — were sold on the open market, says Gerardo Monroy, director of Land Regulation for the municipality of Tonalá.

Then in the 1980s, Mexico’s embrace of neoliberal economics, which allowed for deregulation of the marketplace overall, accelerated such dynamics. Unprecedented urban growth occurred, according to a study in the journal Economía, Sociedad y Territorio, published by El Colegio Mexiquense, A.C., a research center in the State of Mexico. 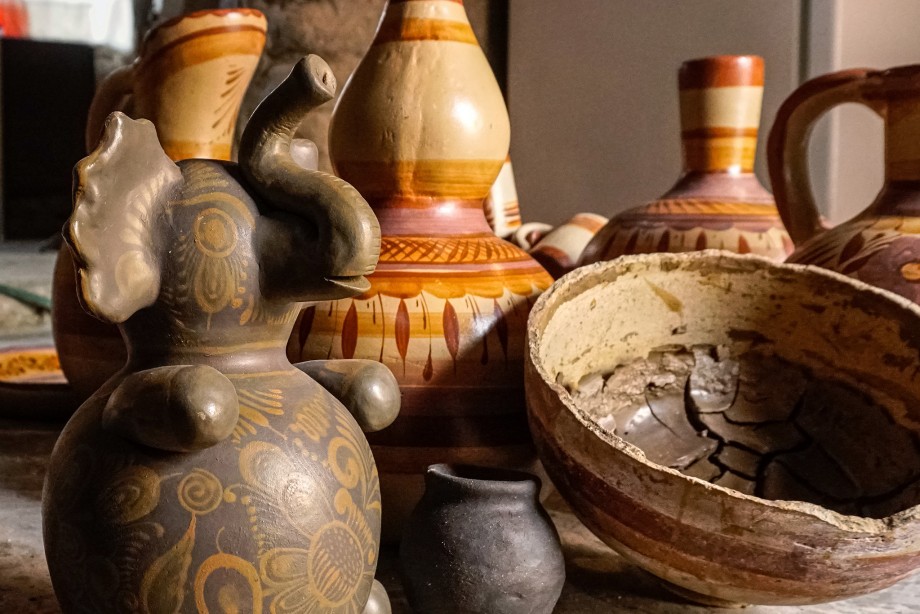 These pieces illustrate the barro canelo technique. After the elephant (foreground) has been put in the oven, its colors will transform and it will acquire the tone of the pieces in the background. Inside the container next to the elephant is a clay called “nuance,” used to paint the pieces. It is one of the hardest clays to find, since the veins of nuance have been buried under cement in Tonalá.

Guadalajara’s gain was barro canelo’s loss. The four types of clay used in the art gradually gave way to the concrete that dominates the urban landscape.

As deposits of their natural materials diminished, potters had to buy lesser-quality clay, which ultimately meant their pieces were missing some of barro canelo’s finer features.

Fajardo says he misses the high-quality clays from El Rosario.

“They were sturdier,” Fajardo says. “When you worked with them, they felt comfortable in your hands. The smell was unique. When you filled a jar with water, the entire room smelled of wet earth, and the brown color was very pretty.”

In El Rosario, about a third of the homes feature a barro canelo workshop. Ceramic pieces — mostly vases depicting flora and geometric patterns in red, white, gray, yellow and ochre tones — sit on tables on the sidewalks. Artisans produce the vases in a series, ready to sell. Only a few artists get all their clays from El Rosario’s soil. 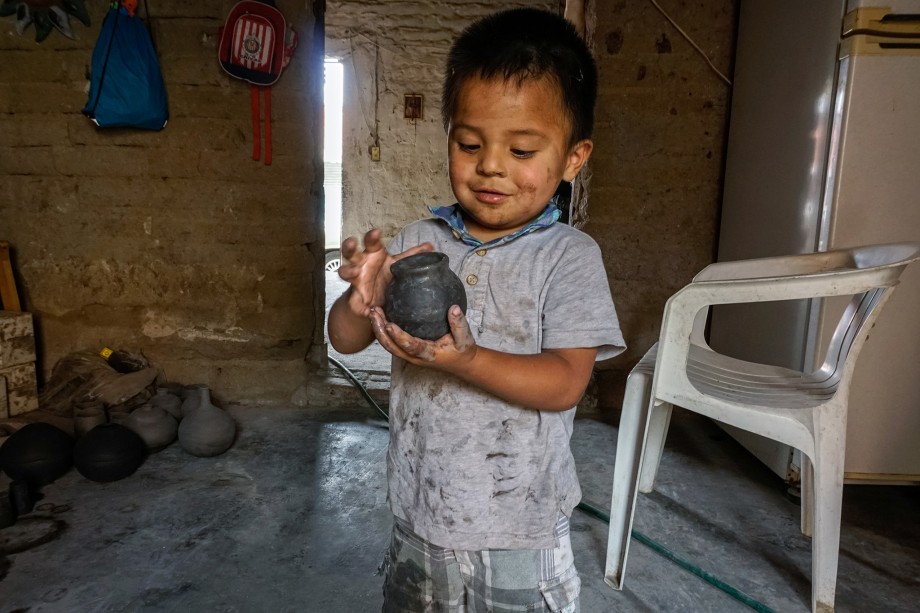 Ismael Fajardo Díaz’s son, also named Ismael, enjoys playing with some of the clay that his father is using to make barro canelo pieces. The boy was born to a long line of potters, who have fashioned local clay in the distinctive style since pre-Hispanic times.

This “must be considered cultural heritage,” says María Guadalupe Zepeda, a researcher at the National Institute of Anthropology and History, and general secretary of the International Council of UNESCO Monuments and Sites, Mexico chapter. In 2018, together with organizations and local activists, Zepeda held a public event in which she argued that the vanishing clay deposits are a major loss.

Miguel Arelis, a local expert in art and culture, says barro canelo potters would be better served if they joined with other artisans.

“There should be a labor and community guild established, not just among barro canelo artisans, but with the entire ceramics population,” he says. “That generates a voice for the cultural heritage specialists, and for that to be promoted at an institutional level.”

José Isabel Pajarito, one of the most recognized barro canelo artisans, says that for the past nine years, the potters, working with Tonalá officials, have tried to generate a “denomination of origin,” wherein the government officially identifies a product with the name of the place where it is produced. (Tequila, made in the Tequila region in Jalisco state, is an example.)

Artisans and activists say this would protect El Rosario’s precious clay and, by extension, barro canelo.

“We’ll see if we can do it this year, and if we do, there would be more support — to leave a few hectares of clay for the people,” Pajarito says.

Fajardo recalls that when he was a child, his parents awoke at 6 a.m. to knead the clay, and by 8 a.m. they were forging pieces. They would toil until 10 p.m.

Fajardo and his nine siblings made their own works. Some polished their pieces with river stones. Others sanded. And still others prepared pieces for painting.

Barro canelo now frames Fajardo’s outlook on the world. When he sees a beautiful landscape, for example, he tries to remember it and then capture it in a piece.

“I want to continue working as long as I can, as far as there are the resources that the earth gives us,” he says. “And that is what I intend to do with my son, so that he learns the trade. When he grows up, he can choose his career, but he should never forget his roots.”