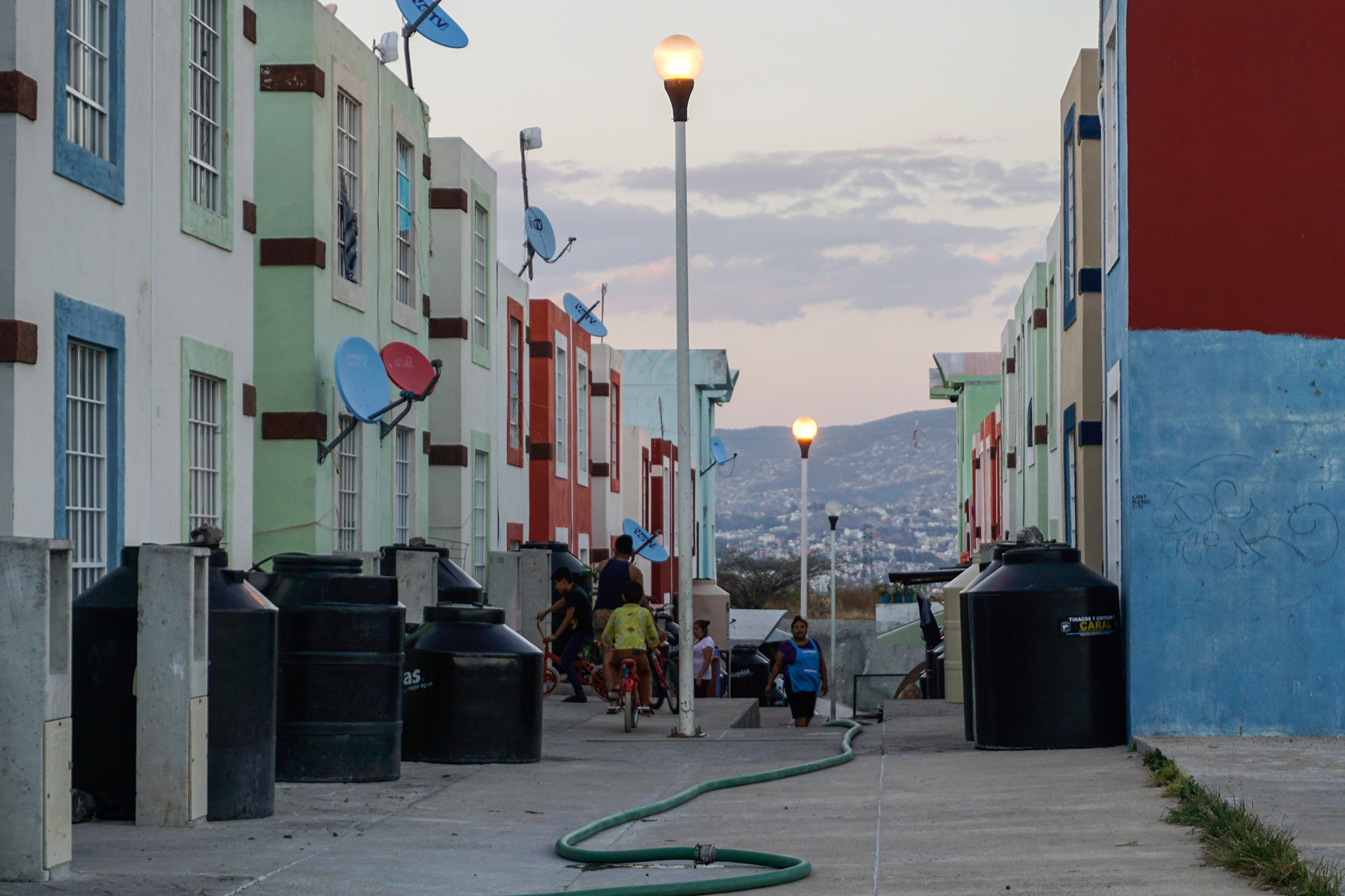 CHILPANCINGO DE LOS BRAVO, MEXICO — Rain thudded against the tin roof. Rosa Bucio Infante trembled from cold and fear. She gathered her five children in the corner of their wood house and watched the nearby Chuchululuya ravine fill like a bathtub.

It was September 2013, and in a rare weather event, both a hurricane and a tropical storm were menacing the coastal state of Guerrero. Bucio lived north of the capital, Chilpancingo de los Bravo, in a community that local officials said was at high risk of flooding. Yet most homes there, with their sheet metal roofs and dirt floors, were unlikely to withstand an onslaught of water.

Bucio’s teenage daughter got up to find a sweater. A wooden joist snapped off the roof and struck the girl’s back. She was unharmed, but Bucio realized they needed to flee. They crossed a stream and made it to safety as the rising water – and the landslide looming on the other side of the property – threatened to swallow their home.

“It took my plants, it took sandbags … a little more, and it would have taken us, too,” says Bucio, a slim, resolute woman, her voice breaking and her eyes wet with tears.

That day, Hurricane Ingrid and Tropical Storm Manuel decimated Guerrero, which is south of Mexico City and home to Acapulco and other tourist destinations. Thousands of people were affected. But a second disaster awaited: a botched attempt to relocate them. 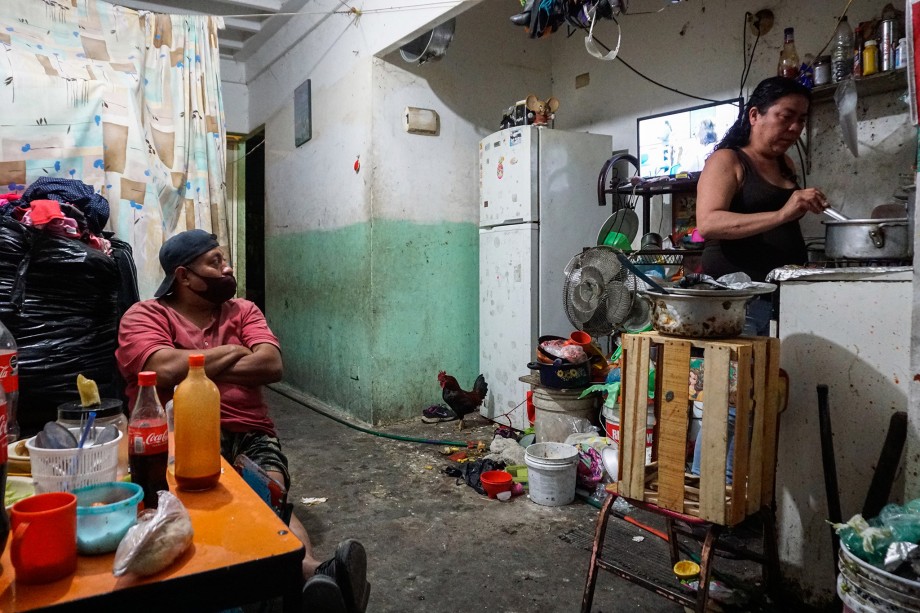 Concepción Reyes Flores waits as his wife, Rosa Bucio Infante, prepares dinner in their Nuevo Mirador apartment. The couple say they miss the openness and freedom of their old community near Chilpancingo’s Chuchululuya ravine.

When landslides and floods ravage Mexico, the government sometimes responds by building communities for the newly unhoused. That’s what happened after the double storm. The government oversaw the construction of close to 600 dwellings south of Chilpancingo and named the complex Nuevo Mirador. Families, including Bucio’s, began moving there in 2015, but it didn’t bring them security.

Nuevo Mirador lacked so many basic services that Valter Emmanuel Damián Bautista, the general coordinator of civil protection in Chilpancingo, estimates that more than two-thirds of residents moved back to the flood-prone hillsides. The bungled relocation shows the daunting challenges Mexico faces as it adapts to the likely tempests – and human misery – of a warming world.

Nuevo Mirador is about a half-hour from Chilpancingo by cargo van, which is less expensive than a cab. Half the drive is paved, the other half, dirt. From a distance, the pink, yellow, green and blue buildings appear cheery, but the prefabricated apartments are cramped for a family of four. According to a study in the journal Espacio y Desarrollo (Space and Development), which is published by Pontifical Catholic University of Peru, the contracting process was plagued by payoffs and corruption.

The apartments are habitable, and the families who moved there face less risk than they did in the ravines, says Roberto Arroyo Matus, an engineering professor at the Autonomous University of Guerrero. But there is no drinking water, so residents purchase water or collect rain, and no garbage collector, so they pay private trucks. The public schools are closed. There are no parks or playgrounds, just three poorly lit basketball courts that kids abandon at dusk. Parents slog to Chilpancingo to shop and work, but the cargo van system is unreliable. 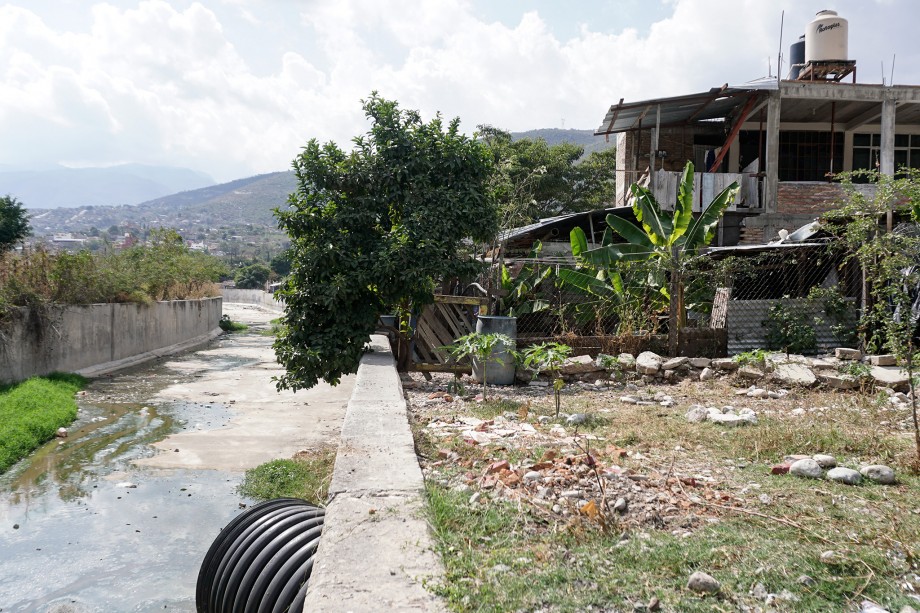 The Huacapa River snakes through the El Amate neighborhood in Chilpancingo. This is one of the areas that the 2013 double storm flooded, displacing a number of families.

The state Ministry of Agrarian, Territorial and Urban Development, which oversaw Nuevo Mirador, declined to comment, saying the complex is now the federal government’s responsibility. Federal officials didn’t respond to a request for comment.

When Bucio and her family arrived, they’d spent more than a year in shelters. Though grateful for a home, they felt boxed in – the space was smaller than their ravine home, and they missed waking up to roosters crowing. They couldn’t keep dogs, cats and chickens outside. They couldn’t cook with firewood. They didn’t feel safe walking around, and they often argued with their neighbors. In the ravine, “we did have problems with people,” Bucio says. “But we talked about it, and here people don’t like to talk.”

It’s unclear how many times Mexico has relocated residents after a disaster, but Guerrero is not the only state where efforts have fallen short. In 1999, a landslide in Teziutlán, Puebla, east of Mexico City, stranded more than 200,000 people. The government resettled a fraction of them in a community of cinder block buildings that, initially, had neither electricity nor running water. A decade later, despite improvements, residents still felt unmoored, according to a study in the undergraduate research journal Explorations: “Many do not want to live there, but it is, for many, their only option.”

In Nuevo Mirador, most residents gave up and moved out. But they weren’t wealthy enough to buy a house elsewhere; many work intermittently cleaning homes, or selling empanadas, cracklings or newspapers. (Bucio is a homemaker and her husband a police officer.) So they returned to the high-risk areas they’d fled; some patched up crumpled houses, while others bunked with old neighbors. 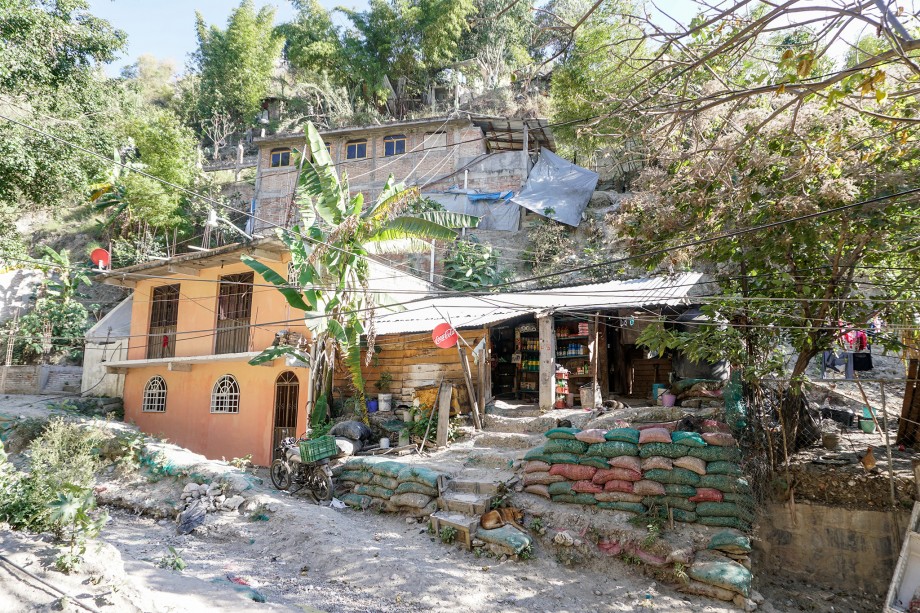 The outside of Santa García Catarino’s home, near the Las Calaveras ravine in Chilpancingo. She and her family lasted only a month in Nuevo Mirador before moving back – the government complex was too far from her husband’s work and their children’s schools.

“We work at the market, and it’s better for us to live here,” says Santa García Catarino. She, her husband and their two children abandoned Nuevo Mirador after a month and returned to Chilpancingo’s Las Calaveras ravine. “There, we have to pay for transportation to get here and back.”

About 5,000 people now live in 21 ravines throughout the city. These are the same areas the double storm submerged. The settlements risk further degrading the soil, making floods and landslides more likely, says Uriel Cabrera, a biologist and environmentalist. In his view, the government needs to better enforce laws that limit where people can build homes, and help those in high-risk areas relocate before disaster strikes.

While Bucio’s family hasn’t abandoned Nuevo Mirador, they still don’t have a deed to their apartment, as they were promised. They hung onto their land near the Chuchululuya ravine and, until recently, spent nearly every weekend there. Some neighbors rebuilt their wooden dwellings; cement is more stable but also more expensive. When it rains, they stay awake through the night, listening for danger.