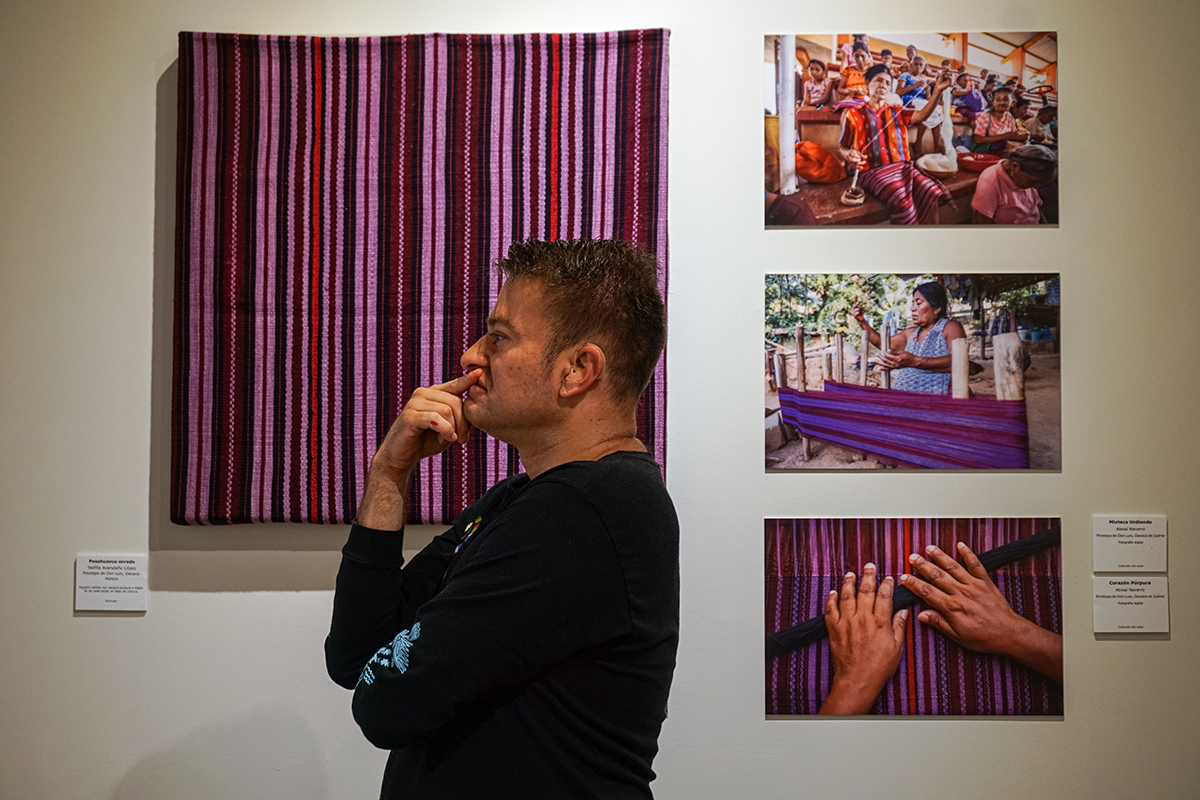 MEXICO CITY, MEXICO — When Julio César Carballido saw online that there was a Mexican Sign Language(LSM)interpreter at Mexico City’s Popular Art Museum, his face lit up.

“When I was a boy, there were no interpreters and I couldn’t understand the exhibitions,” Carballido says. His parents tried to explain the exhibits to him, but their limited sign language made it difficult. Still, his love for art and history compelled him to return.

Now 44, Carballido follows the hands of Brenda Morán Durán, an LSM tour guide, through an exhibit of colorful textiles and clothing pieces. It’s his first time touring the art museum with an LSM interpreter, and he can’t stop smiling.

“I feel happy that there is an interpreter,” he says. “[LSM is] part of my identity as a deaf person; it is my language.”

Increasing accessibility to Mexico’s art museums has been “a labor of many years,” says Sofía García, who leads the educational and public services at the Estanquillo Museum. “It’s not as easy as publishing an activity and having 50 people arrive — it’s little by little.”

The Estanquillo Museum, known for housing the collection of celebrated Mexican journalist Carlos Monsiváis, began offering specific accessible activities such as art workshops and exhibitions with braille text in 2008. This year, the museum installed its first all-inclusive exhibit, “Scenes of Modesty and Lightness,” with guided tours in LSM and audio detailing Carlos Monsiváis’ writings on female performers in Mexican theater. 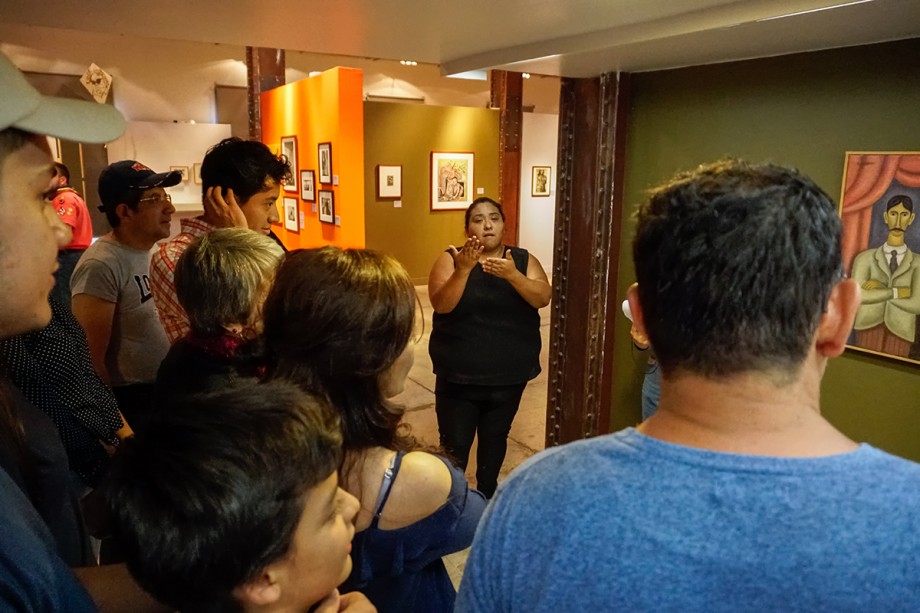 Miriam Cuellar, 30 (facing the camera), leads a free guided tour in LSM at the Estanquillo Museum. “I have seen an increase in attendance in recent years,” says Cuellar, who learned LSM to better interact with three of her colleagues who are deaf. “When there are new exhibitions they are slow to come, but as time goes on, more deaf people come.” She leads the tour on the last Sunday of every month as part of a joint effort between the museum and Creative Inclusion, a collective she created that supports the Night at Museums program.

“All the activities have been thought through in order to allow any person to be able to do them,” says García, adding that braille text has been included at the museum’s exhibits for the past three years. For some exhibits, replicas of displays are made so patrons can even touch the art.

But the Estanquillo Museum isn’t the only museum in Mexico City taking steps to ensure exhibits are accessible and enjoyable for all patrons.

More than 50 cultural venues collaborate to create museum guides and design inclusive activities through a network called The Network of Museums and Cultural Spaces for the Attention of Persons with Disabilities.

“We see disability from very far away when we don’t suffer it or have it nearby,” she says. “We don’t give importance to the fact that they are people and they have a right to culture and traditions.” 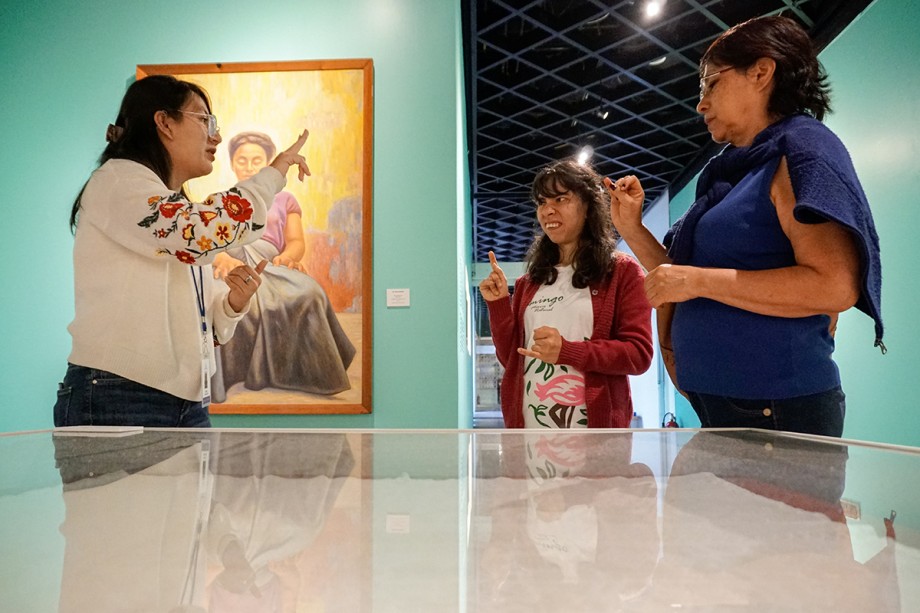 Brenda Morán Durán (left) gives Erika García (center) and her mother Rita García a tour of a temporary exhibit in LSM at the Popular Art Museum in Mexico City. Rita García is learning LSM to better communicate with her daughter who has a hearing impairment. She learned about the tour through Facebook.

Rita García, whose daughter, Erika García, is hearing impaired, says she’s seen the number of activities for people with disabilities increase over the years. When she read on Facebook that the Museum of Popular Art offers guided tours in LSM during their Night of Museums program, she and her daughter decided to go.

“There is more inclusion in museums and it seems wonderful to me,” says Rita García who is learning LSM to better communicate with her daughter.

Ana Belén Paizanni, who leads the education programming for Mexico City’s Carrillo Gil Art Museum, says the museum has hosted an annual inclusive activity proposed by people with disabilities since 2017.

“Inclusive activities are important because we sensitize the general public to the fact that people with disabilities don’t get a reduced offering with just specific activities for them; but rather that they can have everything the museum has to offer,” she says.

The museum works with the network to provide free LSM interpreters for visitors who request the service year-round.