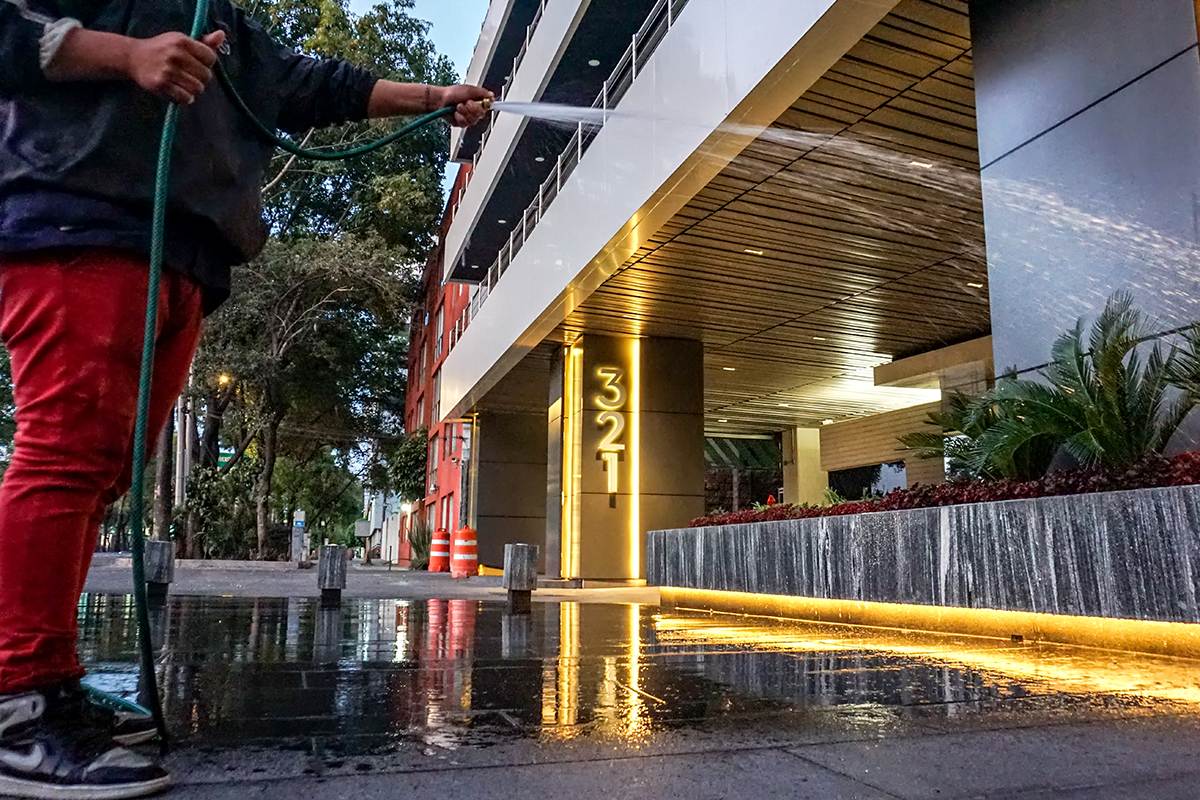 Verónica García, who has lived in the neighborhood since the 1990s, says Portales Sur has transformed within the past five years, changing the way people live. Now some of the homes are condominiums, squeezing more dwellings into the same space.

On top of the crowding is a more fundamental problem: there is not enough water.

At first, García says there were water shortages for a few days at a time – a problem the neighborhood solved by buying water tanks. But the shortages became more frequent.

“Sometimes it took two tankers a month,” she says. “Later on that turned into three tankers.”

This is a story that’s playing out all through the Benito Juárez delegation, south of Mexico City’s urban core. The area is a favorite for developers, who are filling every available space. The new developments, most of which are luxury properties, are easy scapegoats for the water problems. Locals say that when the buildings go up, the water pressure goes down.

The trouble is that no one can prove that for sure. Mexico City’s government is opaque about its water system maintenance and whether the system can withstand ongoing urban growth. Developers who seek permission to build receive some information on water capacity in the areas where they hope to build, but those details aren’t publicly available. Information on the city’s water infrastructure, including whether certain sections have been updated in recent years, isn’t readily available.

In the absence of information, luxury developments in the Benito Juárez delegation are eyed by many longtime residents with extreme suspicion.

In the Xoco neighborhood, next to Portales Sur, water shortages started about six years ago after massive new development began, including seven towers and space for a hospital, offices and more. 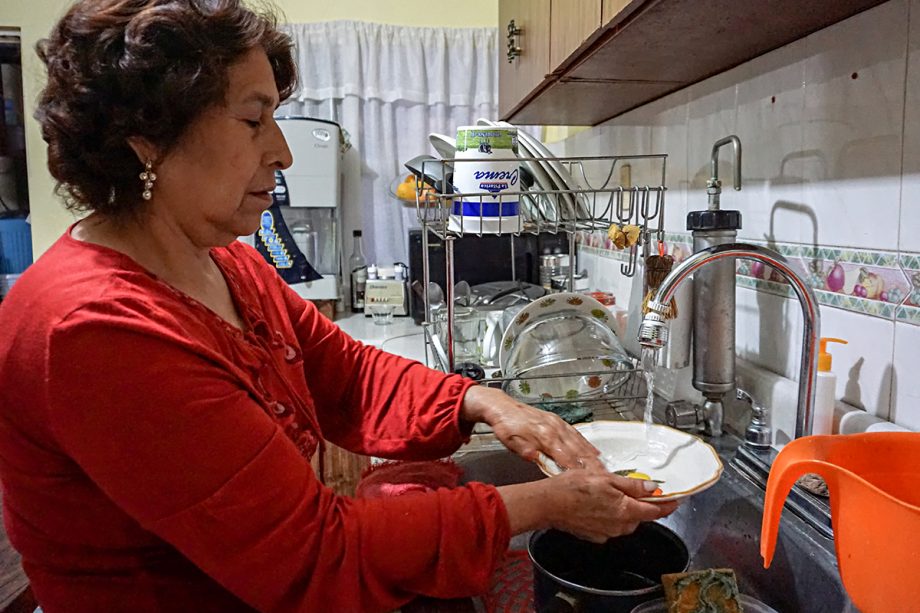 Lidia Suárez, 70, says water pressure in her home has been inconsistent over the past six years. She blames the problem on new developments that have been built in her neighborhood in Mexico City’s Benito Juárez delegation. She fills plastic containers with water to have on hand in case the tap suddenly goes dry.

Lidia Suárez, 70, who has lived her whole life in the neighborhood, says she never knows when water will be available. Sometimes her tap goes dry without warning.

A few streets away, José Cosme Valle Ortiz, who has lived for 50 of his 64 years in the neighborhood, says the water supply at his house has been inconsistent. Some months, he can set his watch to the moment when the problems begin.

“At three in the afternoon the water pressure ends,” he says.

Now, he says, that problem has disappeared. But he doesn’t know if or when it will begin again.

The Benito Juárez delegation is not the most populated area in Mexico City, but it is the fastest-growing. In 2010, 385,439 people lived there, according to official city statistics. By 2015, the area’s population was 417,416.

“Contrary to the perception the citizens have, the new buildings improve or make the consumption of water in the city more viable,” says Alejandro Kuri Pheres, national president of the Mexican Association of Real Estate Professionals, which represents tens of thousands of real estate agents.

The real problem, Kuri Pheres says, is that the city doesn’t properly maintain its hydraulic system.

Many pieces of the hydraulic infrastructure are obsolete, according to records kept by Sistema de Aguas de la Ciudad de México, also known as Sacmex. Sacmex manages the water that gets to Mexico City and ensures that it reaches the city’s 16 delegations. Some show sedimentation or cracks and others have exceeded their capacity.

Meanwhile, the aquifer that supplies 44 percent of the city’s water is over-exploited, according to a 2016 Sacmex document.

The Benito Juárez delegation is not the most populated area in Mexico City, but it is the fastest-growing. In 2010, 385,439 people lived there, according to official city statistics. By 2015, the area’s population was 417,416.

The city’s water supply is like a blanket, says Elena Burns, coordinator of Centro para la Sustentabilidad Incalli Ixcahuicopa, an agency that promotes management of natural resources in threatened areas.

“You move it over here and you cover something and then you can cover another thing, but the blanket is smaller than what we are looking to cover,” she says.

The city hasn’t entirely ignored the problems. In July 2017, then-Mayor Miguel Ángel Mancera Espinosa announced a program to repair water leaks that would begin in the Benito Juárez delegation.

But in January of 2018, Héctor Manuel Reyes Martínez, a Sacmex official, told GPJ that budget cuts scuttled the program before it began.

It’s not clear exactly where the city’s most pressing water problems are. Details about water infrastructure are released in a piecemeal way. Information about how new building projects might impact the existing water supply are unavailable.

When a developer proposes a project, Sacmex collects water feasibility information noting whether the area has adequate water infrastructure to support it. That information is required for developers who seek to get proposals approved for construction.

Those reports aren’t publicly available in order to protect developers’ privacy, according to the city’s guidelines.

In some cases, Sacmex asks the developer to improve the immediate water system by adding in larger pipes, changing plumbing equipment or rehabilitating a well, Reyes Martínez says.

Many of the new developments avoid the problem of water supply altogether by using water tankers.

María de los Ángeles Rodríguez, president of a neighborhood association in General Pedro María Anaya, lives in a condominium that relies on a huge water tanker. She says she doesn’t experience any water problems.

But the delegation has a new, multi-tower luxury development, collectively known as City Towers, which includes amenities like swimming pools, spas, gyms, office space and rooms for parties.

Since that development was built, people who live in older homes in the area have suffered, she says.

Manuel Juárez, 78, is one of those people. He lives in an older condominium building nearby. Water pressure isn’t what it used to be, he says, but there’s no sign that the government plans to take any action to improve the situation.

“We have been living with fear for a long time,” he says. “Another, another, another and another building. They are sprouting like fungus.”

This story was published with support from Instituto Prensa y Sociedad and the Lincoln Institute of Land Policy.