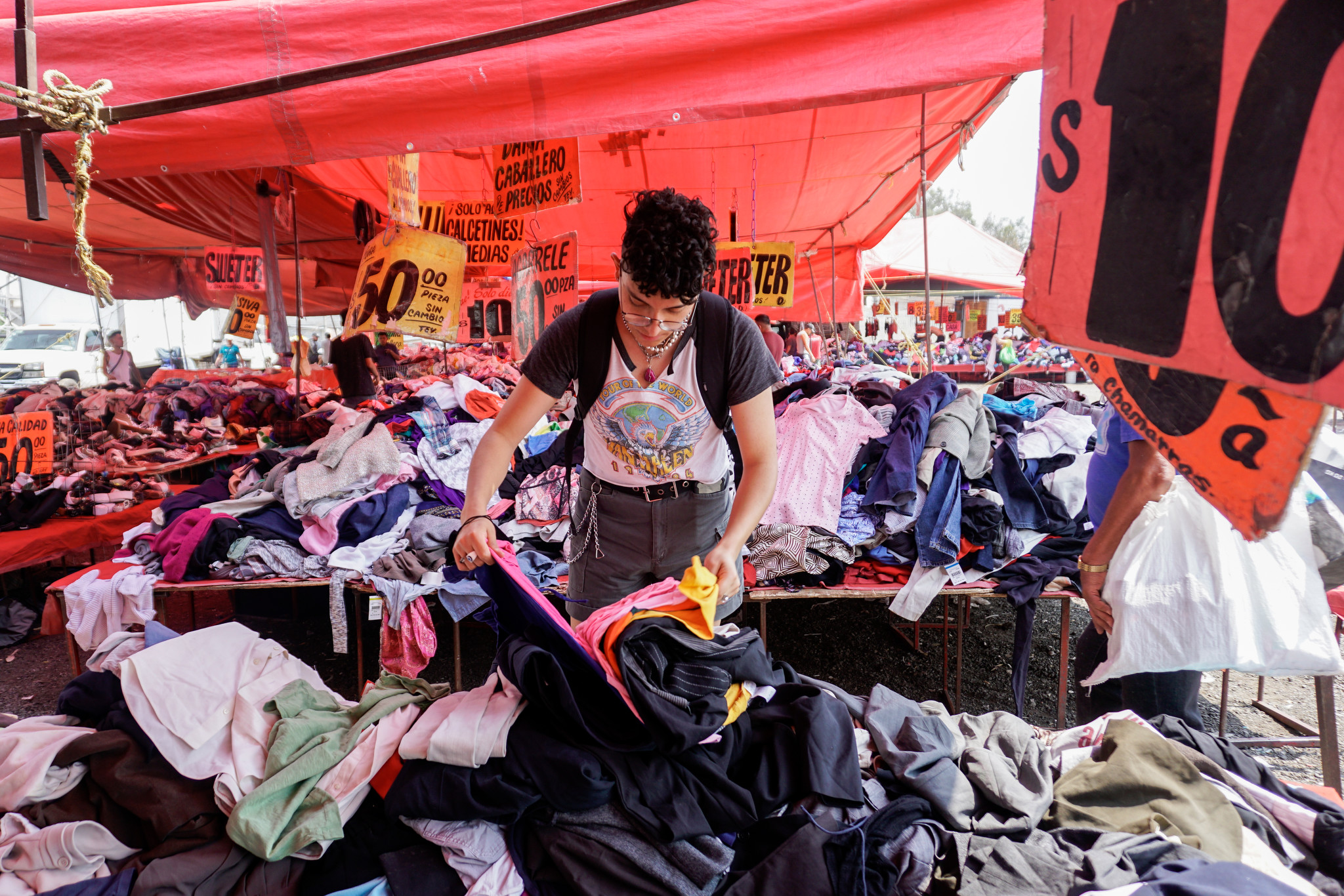 MEXICO CITY, MEXICO — The shouts of vendors mingle at the hodgepodge of stalls selling food, fruit and household items at the tianguis Las Torres, a flea market in eastern Mexico City. Beneath the tents, heaps of clothing are mounded on containers, planks and tubes. People examine garment after garment, holding them up to judge their size and draping their choices over their forearms and shoulders. The vendors watch from above, yelling prices and watching for occasional theft.

Bale clothing, or secondhand clothes, often called “ropa americana” (American clothing) here, is widely available at stalls in the open-air markets, or tianguis, of Mexico City and the State of Mexico. These garments, often illegally smuggled from the United States, used to be an affordable apparel option for Mexican families.

No longer. Around the world, internet-savvy young consumers are embracing secondhand clothes as a hip fashion alternative. At Depop, one of the largest clothes resale platforms in the world, about 90% of its 26 million users are under 26 years old. Young Mexicans are behind the growing trend too.

“I think it’s representative of our generation, casting aside ‘Oh no, what will people say if I wear bale clothing?’ in favor of ‘I want to wear bale clothing,’” says Moisés Molina, 21, who’s seen the transformation up close. He grew up amid the city’s tianguis as his mother ran a bale clothing stall, attended at that time, he says, mostly by middle-aged housewives.

Now, Molina has more than 80,000 followers on TikTok, where he models — with lots of frolic and a dash of the camp aesthetic — the secondhand pieces he meticulously picks up at tianguis every month. “The ideology of my content is to look expensive with cheap clothing, that you can look incredible but without spending more than 500 pesos [around $25],” Molina says. “I don’t want to spread a message of consumption, to be consuming clothes on a massive scale, just the power to have your own style at low cost.”

“I don’t want to spread a message of consumption, to be consuming clothes on a massive scale, just the power to have your own style at low cost.”Moisés Molina, 21, who models secondhand clothes on TikTok

What Molina and influencers like him do is curate — pick up the most unique and offbeat garment from the bale and create chic, fashionable looks. In their hands, bale becomes vintage, retro, preloved. As Efrén Sandoval, an anthropologist who specializes in border economies, puts it, curating involves cleaning the clothes — literally and metaphorically: “The garment is dirty because it’s from the bale, and it’s dirty in a social sense.”

Nadia Reyes, 26, began selling bale clothing on Instagram and TikTok out of her bedroom in Mexico City five years ago — but unlike Molina, she also resells it for a small profit. Twice a week, she tours the tianguis, both big and small stalls, where she spends up to three hours carefully selecting garments. When she gets home, she washes, irons and styles them. On Fridays, she delivers orders to customers around the city.

“In the beginning, I would sell 15 to 20 pieces a week, but now I’m selling 80 to 100,” she says. Her account has just over 16,000 followers, but some videos reach over 2 million views. “Before, it was taboo. People were ashamed to say they bought bale clothing, [that] it’s poor people’s clothes, that it has bedbugs,” she says. “And now it’s fashionable.”

Reyes isn’t the only one looking to make a profit in the resale market. Aided by technology, established brands and retailers are betting big on secondhand apparel by setting up their own resale and rental shops, according to a 2022 report by thredUP, a United States-based resale platform. The same report predicts that the global secondhand clothing market will grow 127% worldwide by 2026, most of that driven by North American consumers.

GoTrendier, a Mexico-based online marketplace for secondhand clothes founded six years ago, has tripled its user base during the pandemic, says Ana Isabel Orvañanos, the company’s country manager for Mexico. Its 6 million users, both in Mexico and Colombia, upload an average of 20,000 garments per day on the platform, she adds. Driving up sales are what Orvañanos calls “heavy sellers”: “those who already have lots of garments and are very good at using the platform.”

But with so much opportunity for profit, what happens to those customers who relied on Mexico City’s tianguis to dress themselves and their families?

“I always used to buy clothes for myself and my children at the tianguis, but I don’t buy as much anymore because the price has gone up,” says Anabel Gutiérrez, 40, a mother of four children between the ages of 9 and 16, and a resident of the municipality of Tecámac in the State of Mexico.

“Before, I would find T-shirts for 5 pesos [25 cents], but now they’re selling for 50 [$2.50]. Imagine shopping for my children, for me and for my husband,” Gutiérrez says. She says she doesn’t know why bale clothing prices have risen. Now, she resorts to stalls that sell what some call “thirdhand clothing” — perhaps those garments young Mexicans and influencers have rejected.