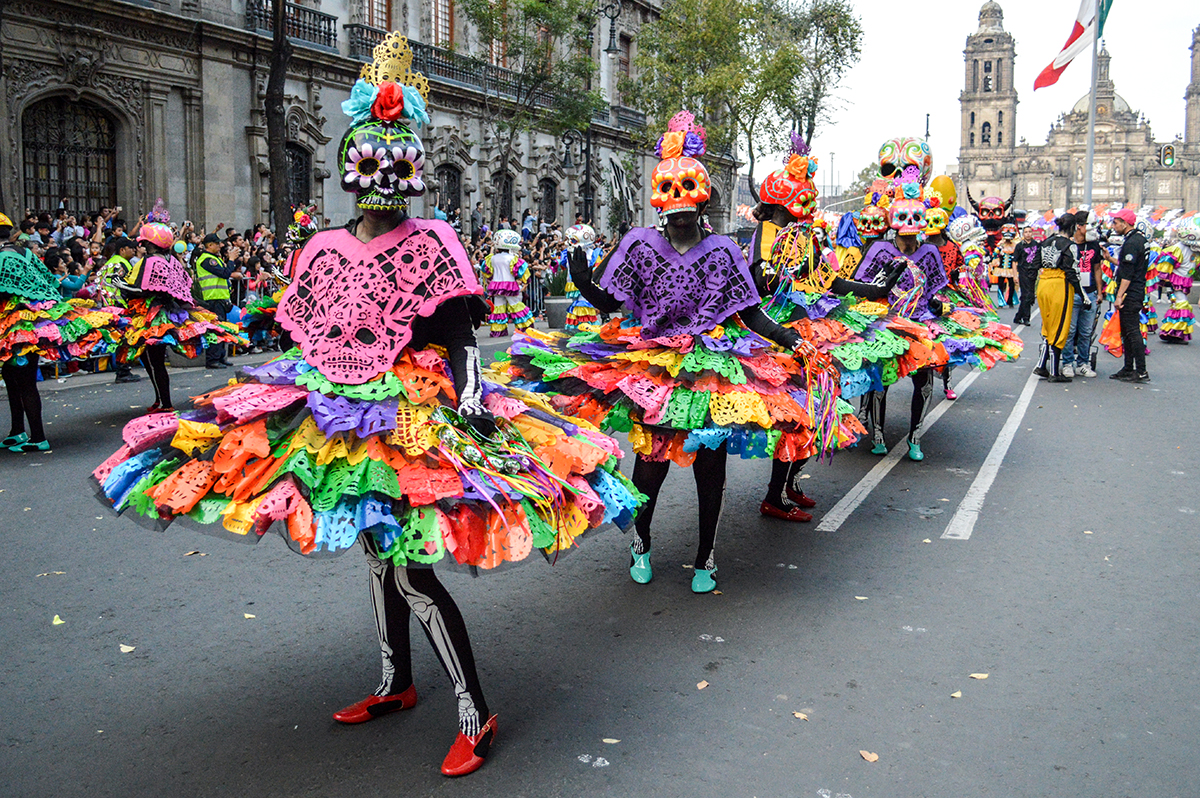 MEXICO CITY, MEXICO — Residents of Mexico City poured into downtown on Saturday to celebrate Día de Muertos , the holiday that celebrates life by venerating death through the memory of those who have passed. Onlookers waited anxiously behind metal fences and along the city’s streets for each float, puppet and balloon. Many in the crowd dressed up as some of the iconic characters of Day of the Dead – the colorful and bewitching, floral and elaborately adorned skeletons and zombies.

A large sculpture, shaped like a raised fist and covered in hard hats, opened the parade, paying tribute to the 471 people who have died as a result of two major earthquakes that struck the nation last month. 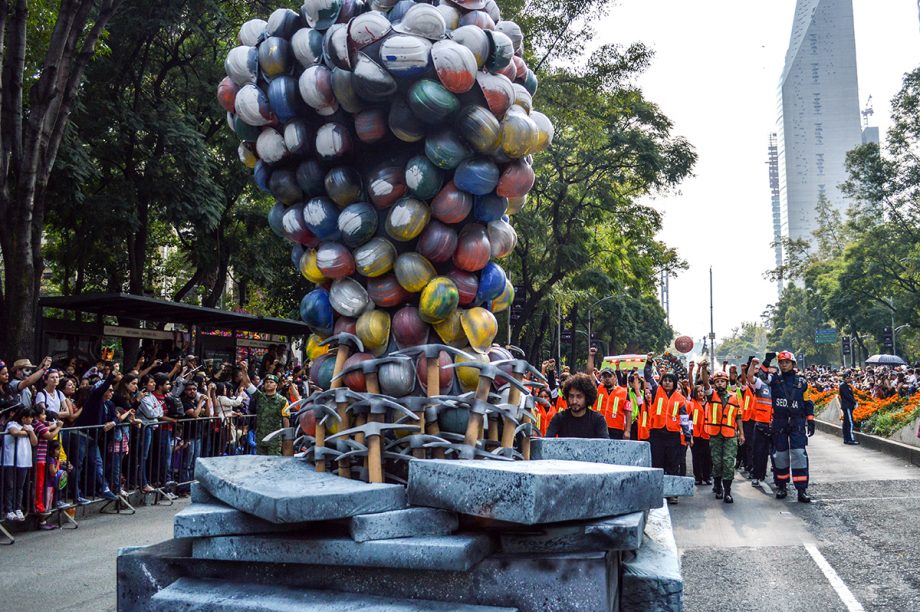 The first float of the day was designed as an homage to the rescuers and volunteers who searched for survivors after the Sept. 19 earthquake in Mexico City.

A 7.1-magnitude earthquake hit central Mexico, which includes Mexico City, on Sept. 19. Over 200 people died in the capital city. Just two weeks earlier, on Sept. 7, an 8.2-magnitude event was measured on the southern coast, the most powerful earthquake to strike the country in a century.

The raised fist represents hope . As rescuers searched for survivors in the rubble, they would raise their fists to ask everyone to be silent so they could listen for signs of life. Seeing the fist at the parade struck a nerve with onlookers, such as Mayra Teodorez . 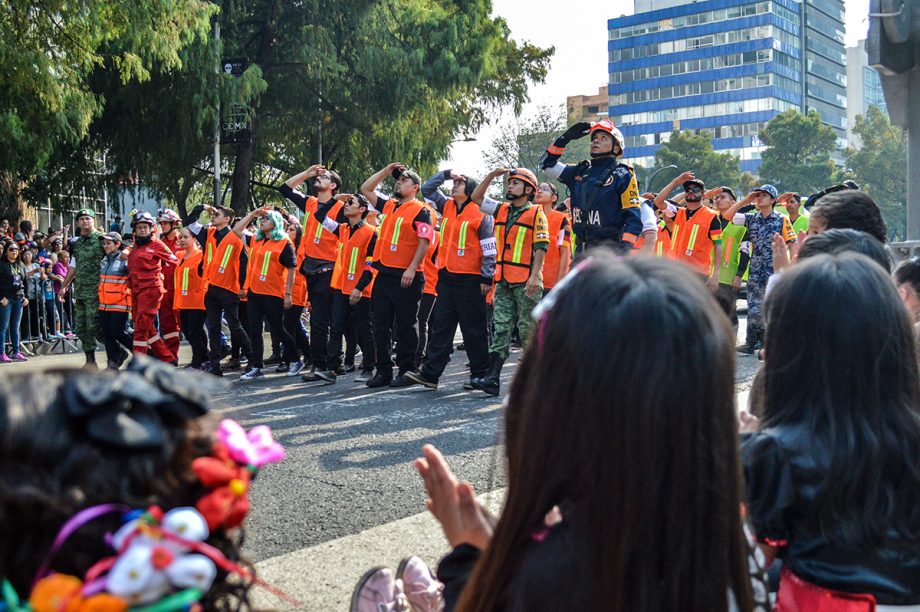 The group that led the parade wore search and rescue gear to honor the volunteers and civil servants who helped search for survivors and clear the city after the devastating earthquakes that struck the country last month.

The group that led the parade wore search and rescue gear to honor the volunteers and civil servants who helped search for survivors and clear the city after the devastating earthquakes that struck the country last month.

“It felt very emotional,” Teodorez says. “It struck sensitive nerves of an event that unfortunately reiterated how fragile life is when it is dependent on nature. And for that reason, we venerate it more these days.”

The parade began at Estela de Luz, a monument erected in 2010 to commemorate the bicentennial of Mexico’s independence, and continued along the Paseo de la Reforma, a thoroughfare where onlookers could watch performers march 7 kilometers (about 5 miles) through the streets to reach the Zócalo, the main public square and center of the city’s historic district. 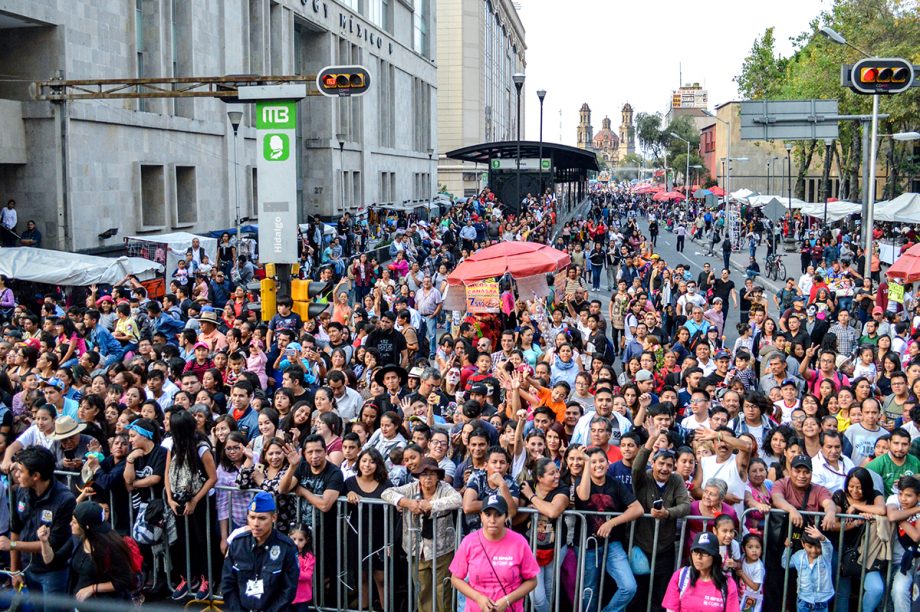 Hundreds of thousands of people gathered in downtown Mexico City to watch the parade’s performers and floats. Here, onlookers wait for the next float at the corner of Calle de Balderas and Avenida Juárez.

Parade organizers began planning for the event over six months ago with a different focus, says Eréndira Toledo, 28, coordinator of Callejón Salao, the organization managing the first segment of the parade. But the earthquakes compelled organizers to ensure the tragedies of the past month were front and center during this holiday that pays homage to the dead.

“To honor the people who helped those who died was the least we could do,” Toledo says. “A week after the earthquake we met again with the same desire to do something and to honor. We couldn’t not [do something], because we lived it.”

Among the changes to the parade were six large skull constructions created by the Última Hora collective. Each were made of papier-mâché and decorated in the traditional clothing of some of the Mexican states where the earthquakes struck. The collective has been exhibiting artisanal decorations for the Mexico City parade for over 10 years, says Marco Osorio, 37, a coordinator. 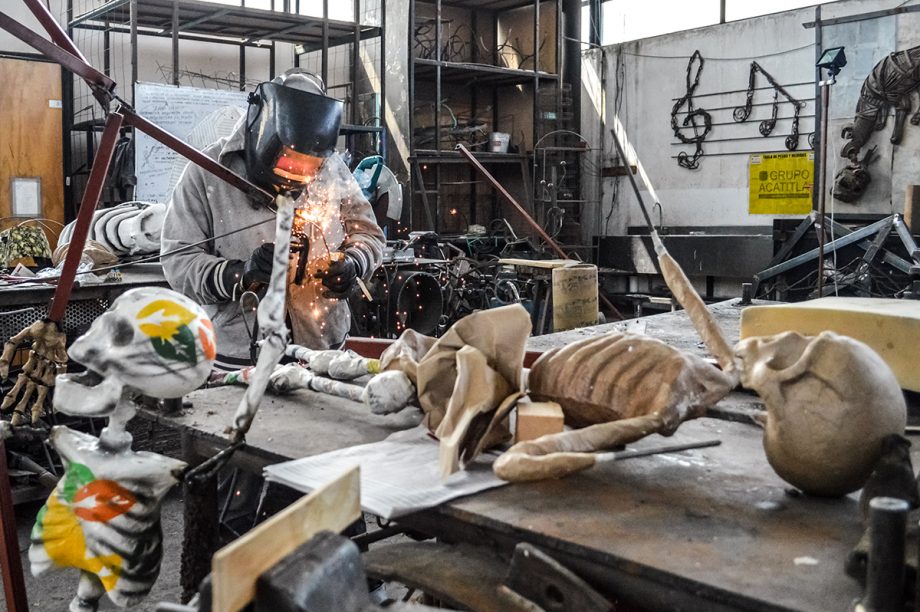 Joaquín Segundo, 30, a member of the Última Hora collective, welds metal that were formed to shape skulls about a week before the parade. The skulls were later covered with papier-mâché.

Magnolia González, 32, a member of the Zion Art Studio, says her collective was originally working on floats of the Xoloitzcuintli dog, which, according to Aztec legend, were the dogs that guided the dead to the afterlife.

“[After the earthquake,] we wanted to provide this meaning, combined with the rescue dogs that helped rescue people from the rubble,” González says. 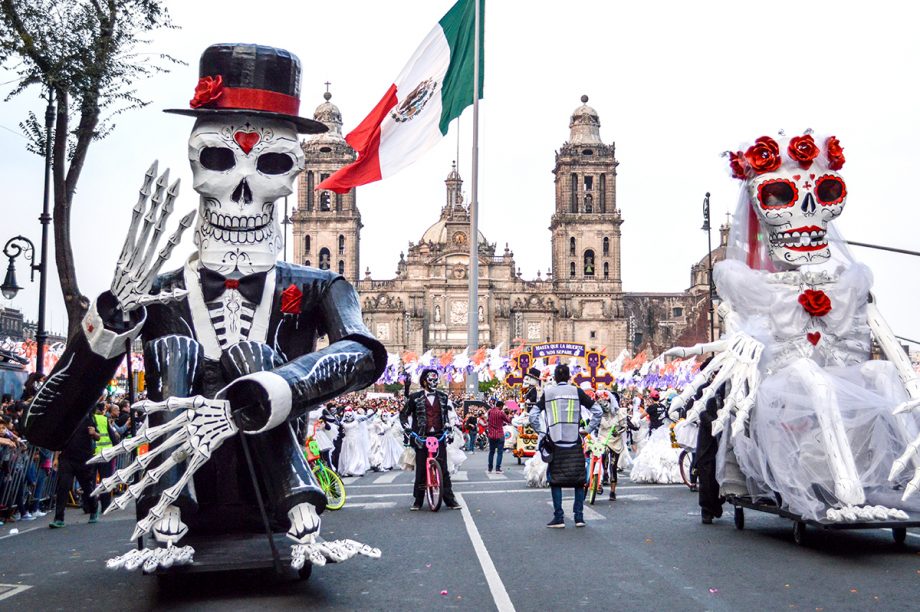 Skulls are iconic symbols of Día de Muertos. Here, two large floats that honor couples who died in the earthquakes reach the Zócalo public square during the Oct. 28 parade in Mexico City.

The earthquake delayed production for many of the parade performers and designers. Malena de la Riva, 45, lead designer for the costumes on one of the city government’s floats, says the groups and neighborhoods where she usually sources her materials experienced drastic structural damages. Nearly 40 buildings  have collapsed in Mexico City as a result of the earthquake.

The final form of the city government’s float highlighted the history of Mexico’s indigenous people, from the Aztec empire to modern Mexico, and featured people wearing costumes to represent the countries that provided aid to Mexico. 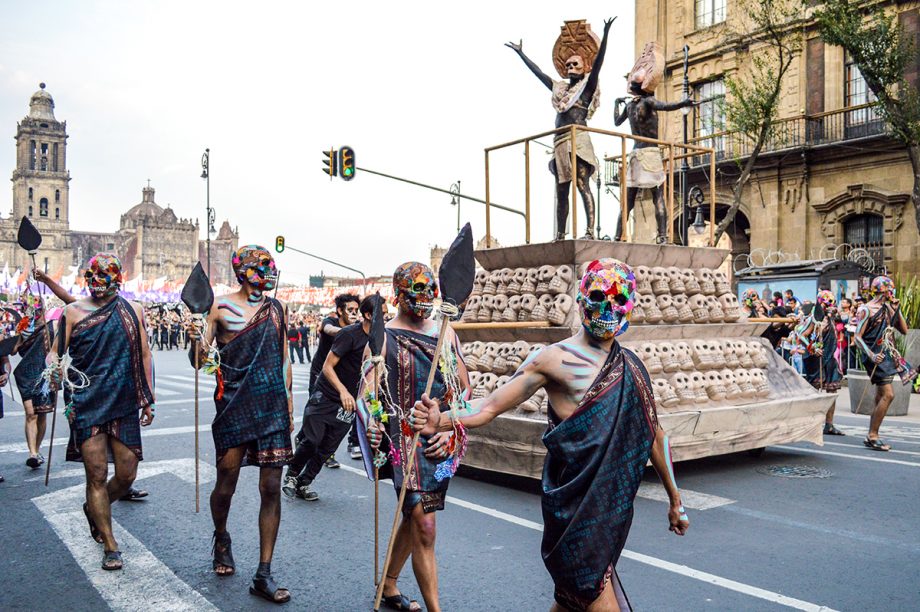 Many floats celebrated the origins of Day of the Dead, a tradition that traces back to the ancient Aztec people.

Historians trace Día de Muertos back to the Aztecs, an indigenous people who moved to present-day central Mexico in the 12th century. These Mesoamerican people celebrated the lives of their deceased family members with month-long rituals. The tradition today incorporates this core indigenous principle with elements of Catholicism: the holiday takes place on the first two days of November, coinciding with the Catholic holidays of All Saints Day and All Souls Day. In Mexico, Nov. 1 is dedicated to deceased children, and Nov. 2 to adults.

Miguel Ángel Mancera Espinosa, mayor of Mexico City, in a press event on Oct. 18 discussed the changes to the Día de Muertos parade, reinforcing the unity Mexicans felt as they immediately moved to help their neighbors in the minutes after the tremors.

“We celebrate through death,” he said.

In a country still mourning, it’s a sentiment that many say is still needed. 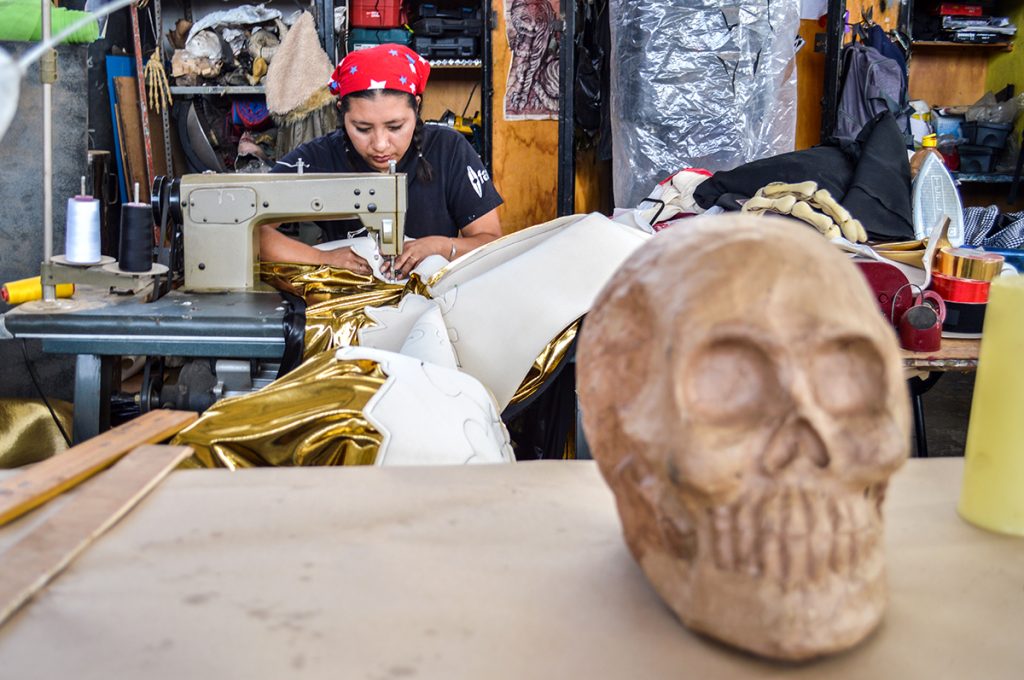 Irani Bustamante, 41, sews the clothes that will dress the skulls created by the Última Hora collective. 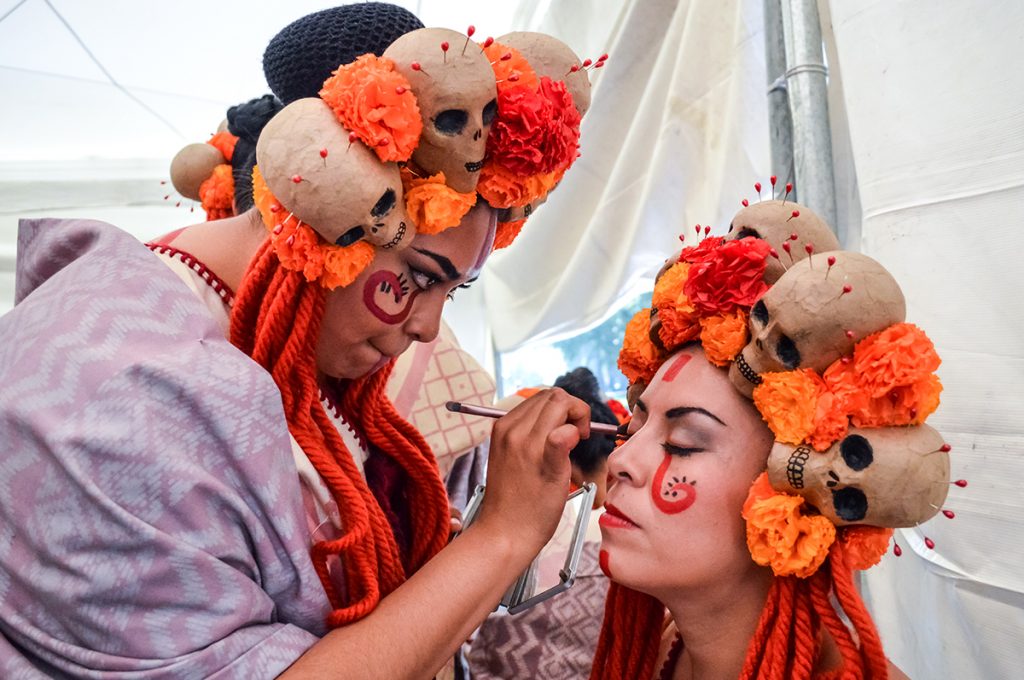 Hours before the parade, performers gather in nearby tents to apply elaborate costumes and makeup. 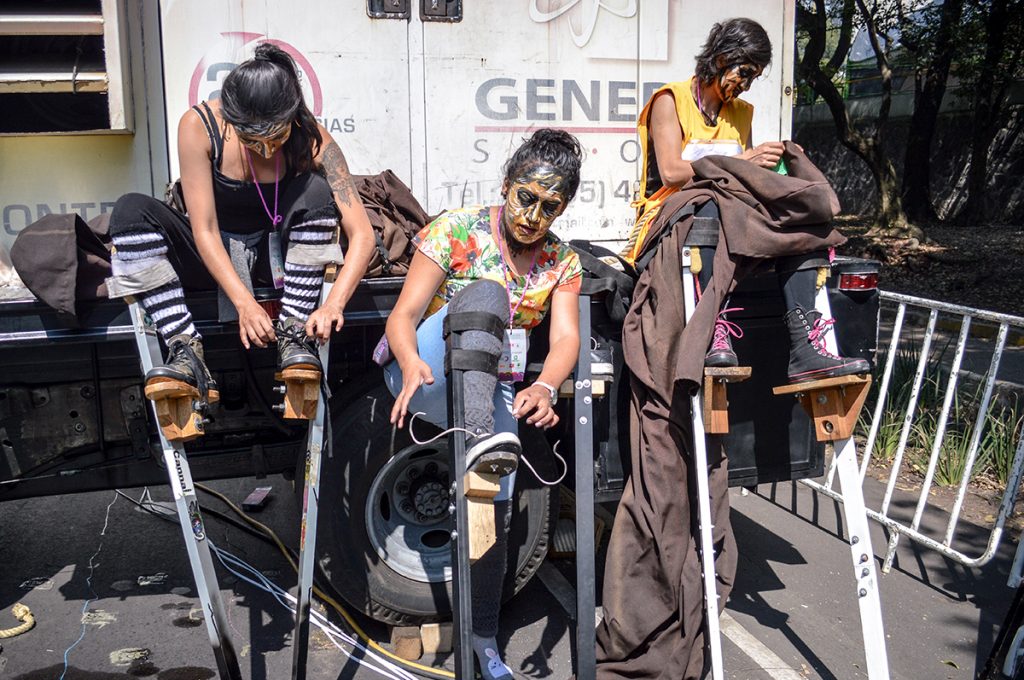 Performers get into their stilts to perform during the Oct. 28 Día de Muertos parade in Mexico City. 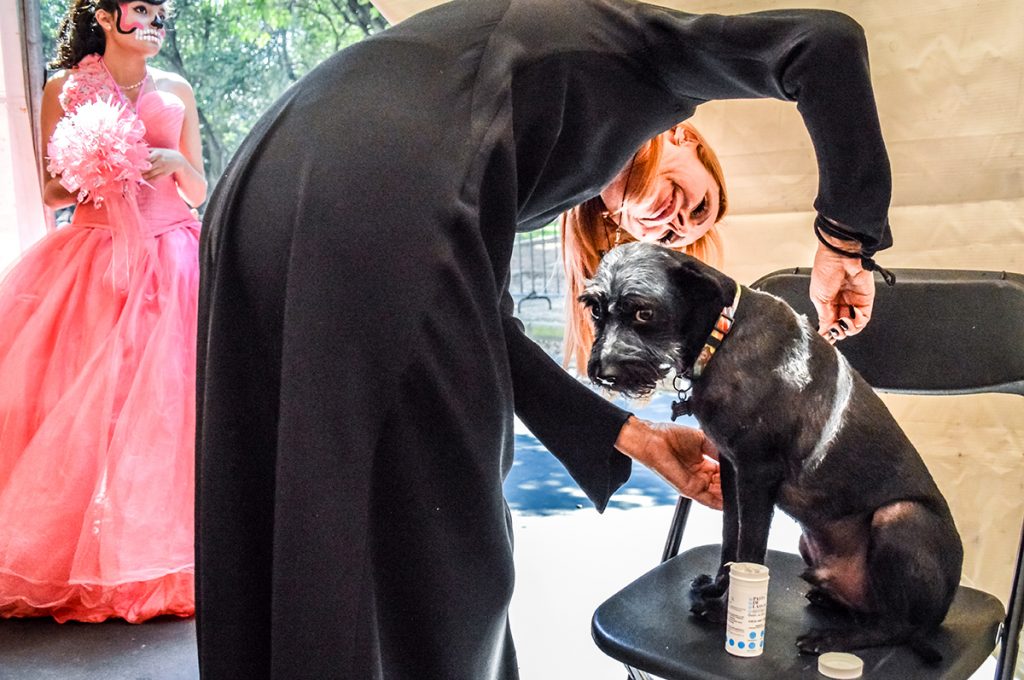 A member of the Callejón Salao collective walks the parade with her dog, which she decorated as a skeleton. Dogs are a prominent feature of the parade, in memory of the ancient dogs revered by the Aztecs for guiding them to the afterlife, as well as the dogs that helped with search and rescue efforts during the earthquakes. 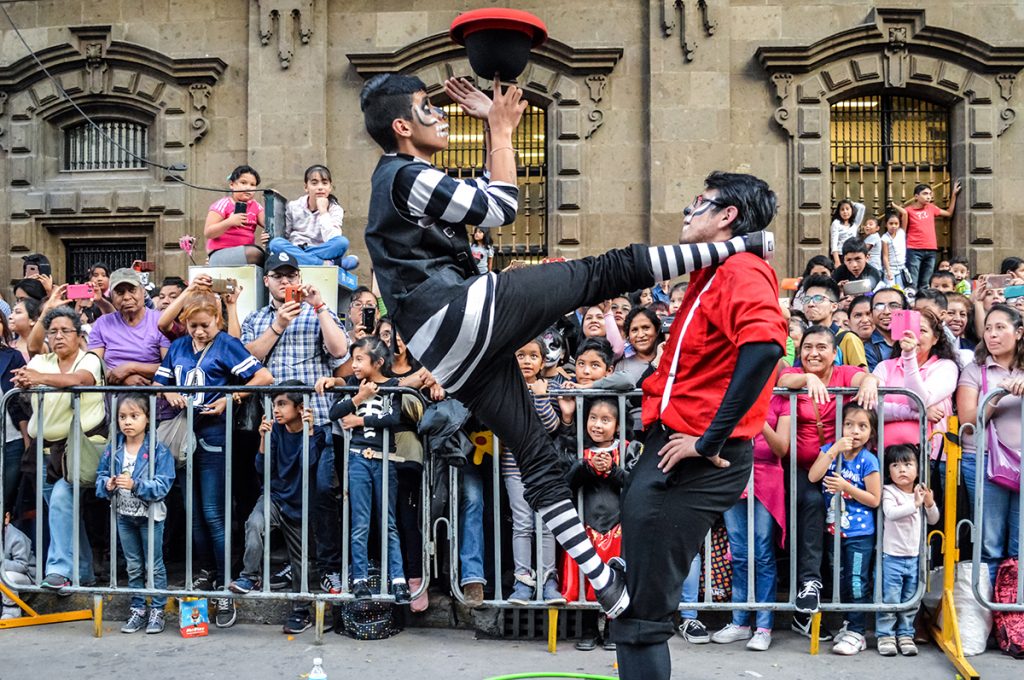 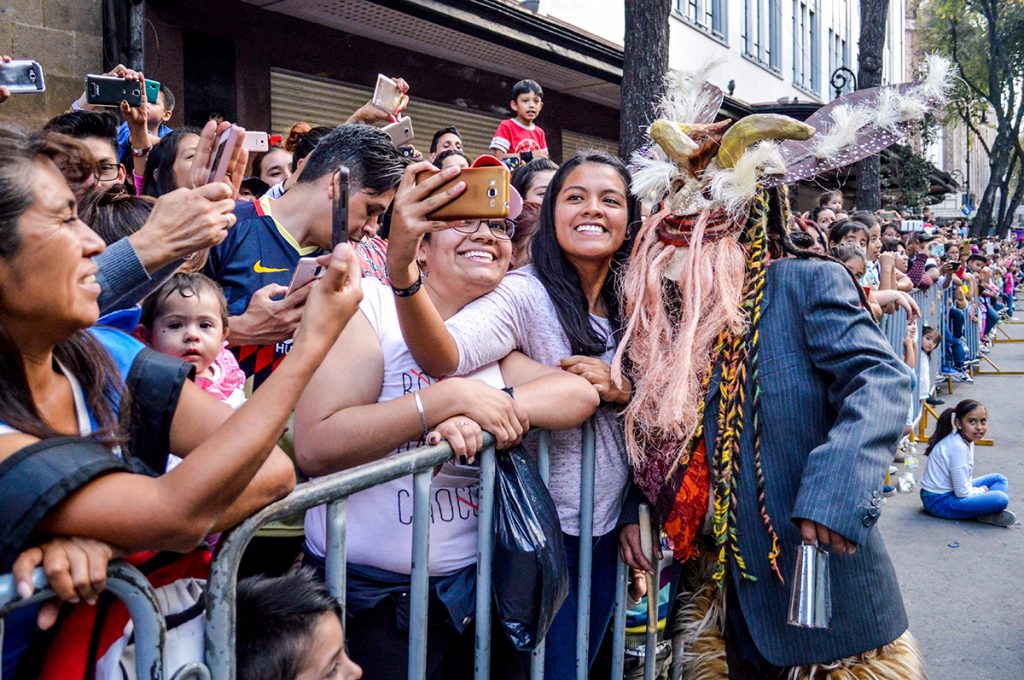 Performers interact with the crowd, dancing with them, taking photos and trying to spook them.