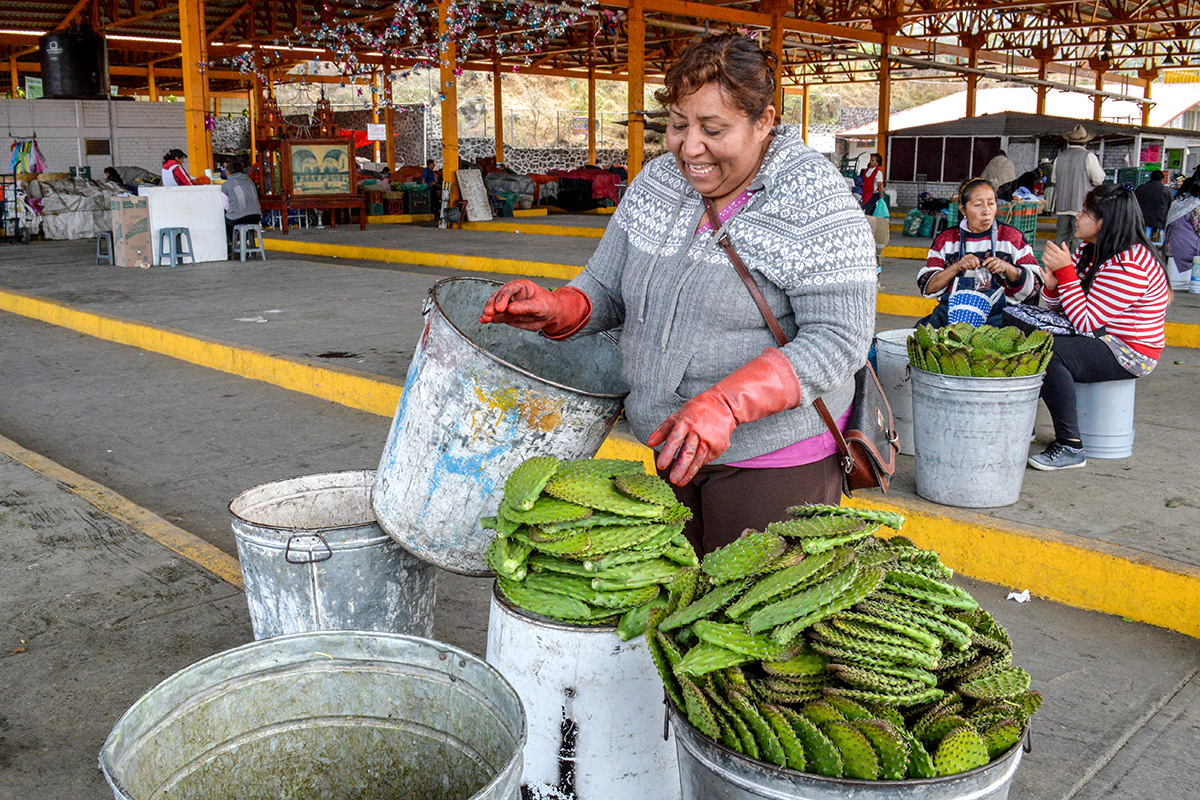 MEXICO CITY, MEXICO — There are no supermarkets in Mexico City’s second-largest delegation, and the residents want to keep it that way.

With cobbled lanes that wind up and down steep hills, Milpa Alta’s center feels like a small town. Instead of plastic bags bulging with processed foods, people carry plastic and metal containers of nopal, the prickly pear cactus that grows abundantly here and is known for its medicinal benefits.

Nopal is often served with lamb, which is also raised in this neighborhood. Growers sell both to their neighbors. It’s an old-fashioned system that draws lackluster reactions in travel guides that suggest there’s not much to the place, but for the people who live here, an aversion to the modern supermarket is a sign of commitment to local food and healthy living. Supermarkets are often valued for the broad choices they offer to the neighborhoods where they exist, but for Milpa Alta residents, such stores are a sign of dependence on a diet devised by businessmen. Plans to construct them have always been met with fierce opposition, for as long as anyone here can remember. 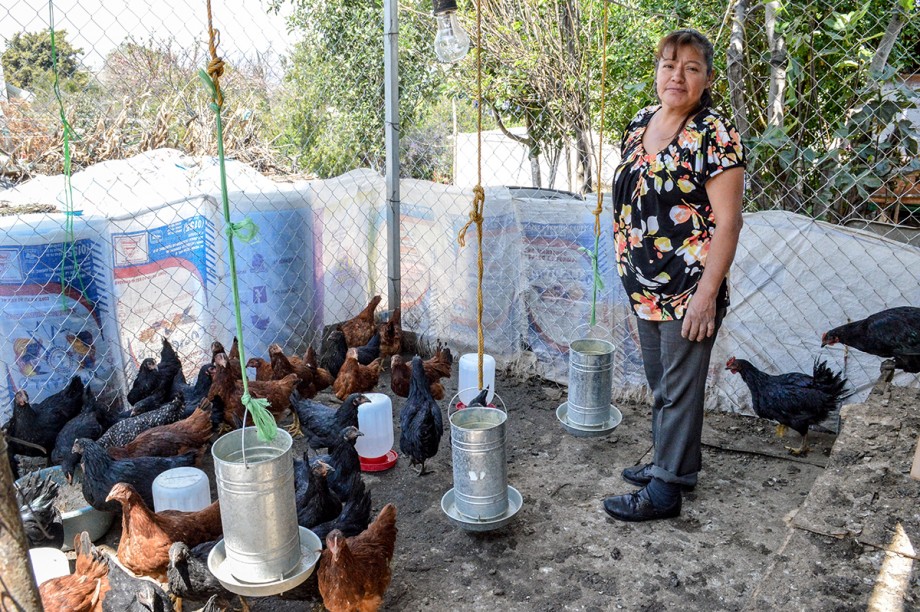 Herminia Ibáñez Cadena, 49, stands near the chickens she received from a government program that supports urban agriculture and healthy eating. Ibáñez sells chickens and eggs.

“The community is 100 percent healthy,” says María del Carmen Rogel, 48, who has lived in Milpa Alta for 30 years. “We know the growers and from there we consume.”

Like her husband, del Carmen Rogel is a farm worker who goes five days each week to the neighborhood’s market area to sell her cactus pads and, with the money she earns, buy fruits and vegetables that are also grown locally.

“The community’s economy is based precisely on this cycle of production and sale of local products,” says Alejandra Campos, 62, the deputy director of the Milpa Alta government. “[At the local market,] 100 percent of the tenants are area residents.”

Milpa Alta, with 137,000 residents, is the second-largest delegation in Mexico City, but with corn and nopal fields covering sloping hills, it looks and feels more like a rural area than a part of one of the world’s largest metropolises. Milpa Alta produces 90 percent of the nopal consumed in the Mexico City area, according to government data.

Nopal is traditionally served with barbacoa, a special barbecue-style preparation. Here, the barbacoa is made from lamb that is raised in the neighborhood.

Javier Meza, 50, has raised sheep in the region for 20 years. He sells them live for 700 or 800 pesos ($36.56 – $41.79) each. Meza also harvests nopales and sells them three times a week at the Centro de Acopio y Comercialización de Nopal-Verdura en Milpa Alta, an outdoor market. Afterward, he checks trash cans for fruits and vegetables that aren’t sold due to their appearance and feeds them to his sheep. 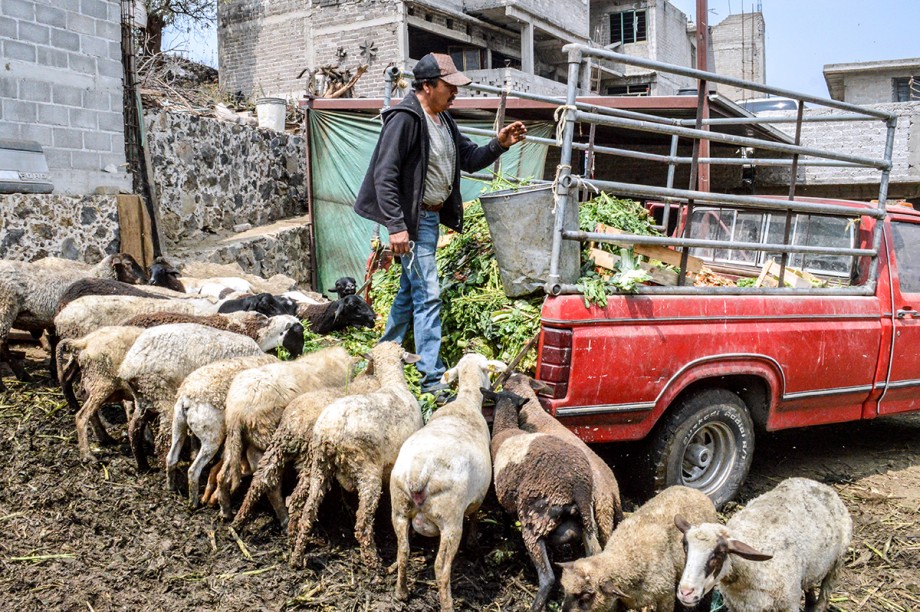 Javier Meza, 50, feeds his lambs the produce that is discarded after the Milpa Alta neighborhood market ends.

The delegation has recently received help from the city government to ensure that this way of life continues. Two years ago, the government created a small-scale sustainable agriculture program, formally named the Agricultura Sustentable a Pequeña Escala de la Ciudad de México “Mejoramiento de Traspatios” program, to help farmers within the city limits. The program is active in seven of the city’s delegations where zoning allows farmland. Through it, people can get quails, rabbits, turkeys and chickens as well as supplies to build greenhouses.

Italia Soria Ordóñez, 26, one of three local monitors with the program, says its goal is to foster a healthy food culture that can also financially benefit families. Herminia Ibáñez Cadena, a 49-year-old Milpa Alta resident, received 40 hens, two food packages and materials for a chicken coop from the program.

“I will rely on them for sustenance, and make the most of the eggs,” Ibáñez says. “And I’ll collect the chicken dung for my nopalera (as fertilizer).”

There’s very little waste, and bartering is common, Ibáñez says. She often asks her neighbors for corn, lima beans, peas or pumpkins in exchange for eggs or the nopales and apples that she grows in her garden.

“That’s the good thing about us, that among us we share,” Ibáñez says.