Skip to main content
The story you are reading was published on Saturday January 16, 2016. To read more recent stories click here. 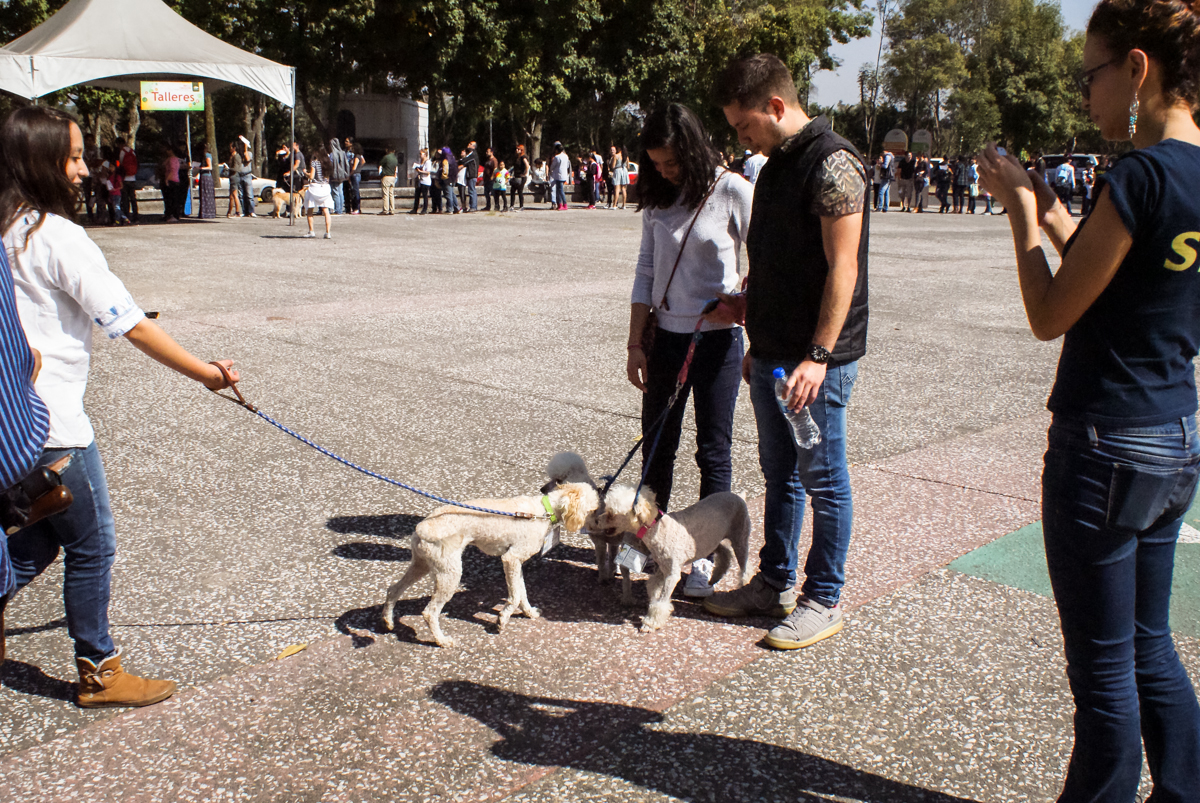 MEXICO CITY, MEXICO – People stood in a long line on the promenade of the National Autonomous University of Mexico. One by one, they inched toward the sign-in table, and found themselves closer to the dogs they were eager to see. The dogs, grouped in black kennels, stare at the people, wagging their tails and panting in anticipation.

There were so many people at the dog-walking and adoption event that the line was closed an hour early.

This scene has repeated itself in various locations throughout Mexico City on the last Sunday of each month for the past three years, all for a chance to walk a rescued dog for 30 minutes. The event is called “Domingo en 4 Patas,” which translates to “Sunday on 4 Paws.”

“The only thing we ask from people is their time,” says co-founder Aroón Rivera.

The event promotes dog adoptions from local shelters, Rivera says. However, he says, the main goal is to raise awareness and provide care and affection for lonely and forgotten shelter animals.

“I think we provided a bridge to be able to educate a little bit, or at least open people’s eyes so they can be interested and learn about it,” Rivera, 37, says.

But now, the event that animal welfare advocates say pioneered a new way of connecting people to dogs could end for good. Sunday on 4 Paws doesn’t have the money to continue, Rivera says. Event organizers suspended the event, alerting volunteers and shelter officials in late November.

“We do not see it as the end of Sunday on 4 Paws,” Rivera says. “It is just a break in which we will find the way to obtain resources to continue with the project. It was a very hard decision, but we knew that we couldn’t continue without the money.”

Each event cost between 4,500 and 5,000 pesos (about between $263 and $292), Rivera says. He and a friend funded the events together, and sponsors provided event space and supplies.

Sunday on 4 Paws was unique because dog-walkers aren’t asked for donations, Rivera says, but instead learn more about the lives of shelter animals, including how the animals are caged and lack exercise.

“I think that exposing them and the invitation to resolve this, in some way, is what made people turn to see this initiative as a noble and different option,” Rivera says.

Volunteers from Sunday on 4 Paws also visited shelters to bathe animals and help with general upkeep.

Rivera was inspired to start this event after he adopted his own dog, Fausto, in 2011 from “En Busca de un Hogar,” which translates to “In Search of a Home,” a local animal shelter.

He adopted one dog, but felt he needed to do more to find homes for the many other animals who were stuck in cages. He partnered with the In Search of a Home shelter in June 2012, and with the help of his friends and family, hosted the first Sunday on 4 Paws event with 40 dogs.

Rivera and the other event coordinators were surprised to find long lines before the first event even began.

Since then, Rivera says the event has partnered with up to shelters located across Mexico City. All the participating dogs are vaccinated, dewormed, sterilized and have identification badges. Each shelter is responsible for the transportation of their dogs.

An estimated 300 dogs have been adopted because of the monthly events, Rivera says.

There are more than 2 million homeless dogs in the city, according to a 2009 report by Humane Society International/Mexico.

Many people are unaware of how to care for dogs, and end up abandoning them at the first signs of problems, she says.

“There are still many people who have this way of thinking, that animals are machines, and they continue thinking that animals are here to serve us, and if they do not serve you, you must throw them away,” Edwards says.

Because Sunday on 4 Paws allows participants to spend time with dogs to get to know their names and personalities, Edwards says it educates people on how to care for dogs.

“In fact, I’m already interested in two of them,” Avalos says, referring to dogs she walked during the events.

In addition to shelters, Sunday on 4 Paws has also worked with individuals who rescue dogs. This is the case of Margarita Sandoval who has participated in the event since January 2014.

On her own time, she rescues dogs she finds on the street and works to find them a home. By working with Sunday on 4 Paws, she says she has completed more adoptions as a result of participating in the events. In 2014 and 2015, she has placed 23 dogs in homes through the initiative, she says.

For some volunteers, dog-walking had unexpected benefits.

“Sunday on 4 Paws has been a milestone in my life,” says Rodrigo Alvarado, 24, a member of the Sunday on 4 Paws volunteer team. “When I arrived I was going through a complicated situation. I was depressed and I didn’t know what to do with my life. I made very good friends, (this) pulled me out of the depression and I realized I was not alone.”

Alvarado says he is now studying veterinary medicine and zootechnics at the National Autonomous University of Mexico because of the work he has done with Sunday on 4 Paws since 2012.

Rivera says he hopes to host Sunday on 4 Paws events again. But in the meantime, he hopes local shelters and community members are inspired to make changes in their own lives or start their projects to continue advocacy for the caged and alone shelter animals.

“The nice thing would be that they had initiatives to realize something similar, or something that helps them promote their animals, behaving in the way in which we worked in that time,” he says. “That would be something wonderful. Not to wait for someone to come and push them.”