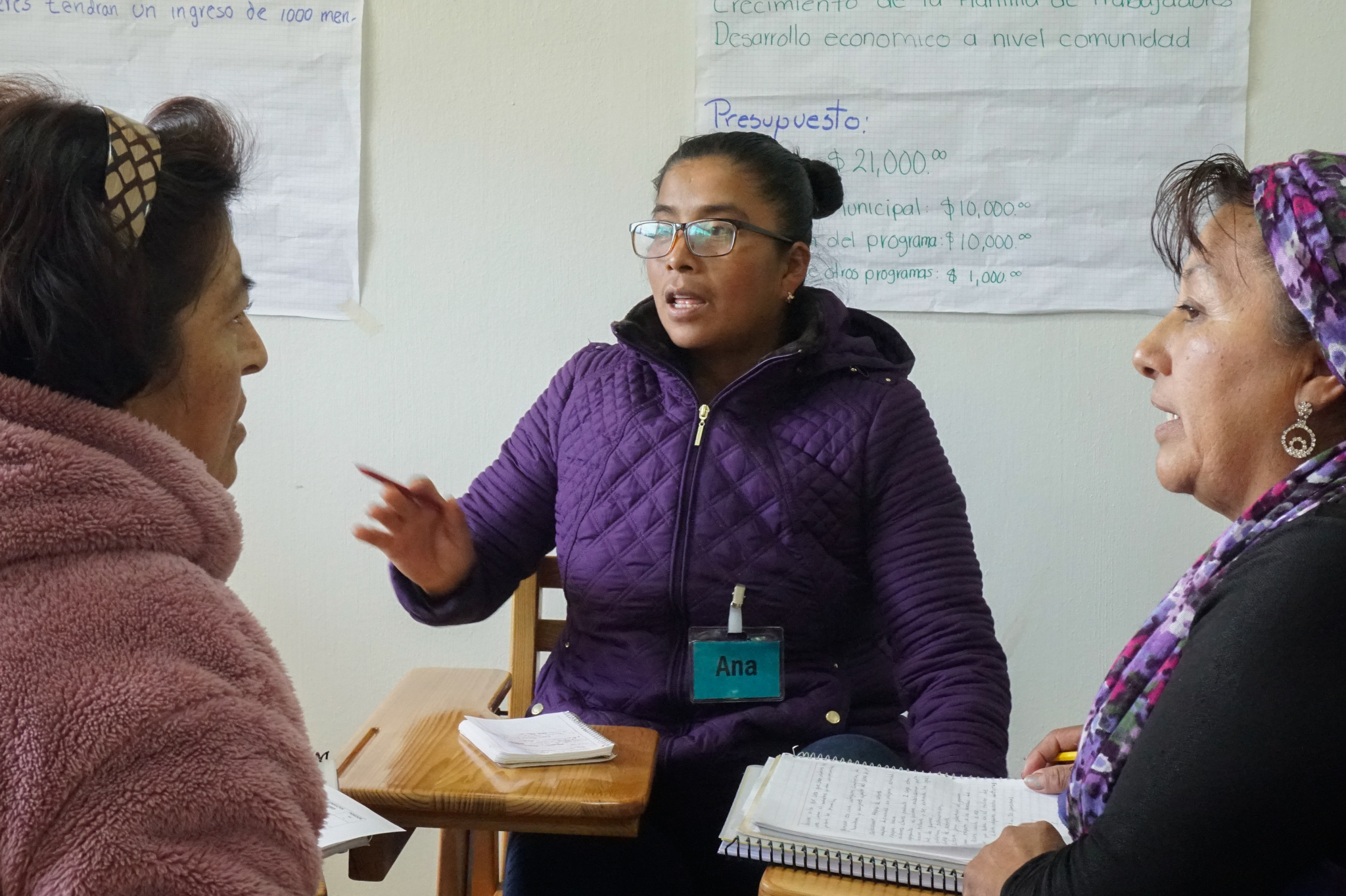 IXTLÁN DE JUÁREZ, MEXICO — When Ana Ramírez first took office on a municipal council in 2016, she didn’t think she was supposed to speak.

“It was the men of the council who would talk and make decisions,” says Ramírez, who oversaw health and education on the Santa María Yavesía council in the Ixtlán district of southern Mexico’s Oaxaca state until nearly the end of 2019. “No one within the council helped me to understand what it was I had to do.”

A member of the Zapotec indigenous people, Ramírez was far from alone in her struggle.

“In 2016, we found some women that had been elected to the council seated outside of the town hall while the council meetings were going on inside,” says Blanca Castañón Canals, founder of Espiral por la Vida (Spiral for Life), a civic organization aligned with the University of Sierra Juárez in Oaxaca that has trained Zapotec women elected for political office.

In indigenous communities, many female officeholders found themselves shackled by a lack of legal knowledge, little preparation and gender discrimination. But through training and perseverance, Zapotec women in the Sierra Norte region of Oaxaca state bulldozed those obstacles. They learned how to get things done, even as they gradually reshaped the attitudes of men who have long controlled power in indigenous regions.

Their journey began in 2014, when an amendment in Mexico’s Constitution forced municipalities to nominate or elect at least one woman for local office. In Oaxaca, the law was enacted in 2016.

This was a dramatic change in Oaxaca’s indigenous communities, where so-called customary law held sway. Within this system, men lead the household and women depend on them, says Esmeralda Bolaños, research professor and head of the gender project at the University of Sierra Juárez. Men inherit land, and women, when they marry, live with their husbands’ families. 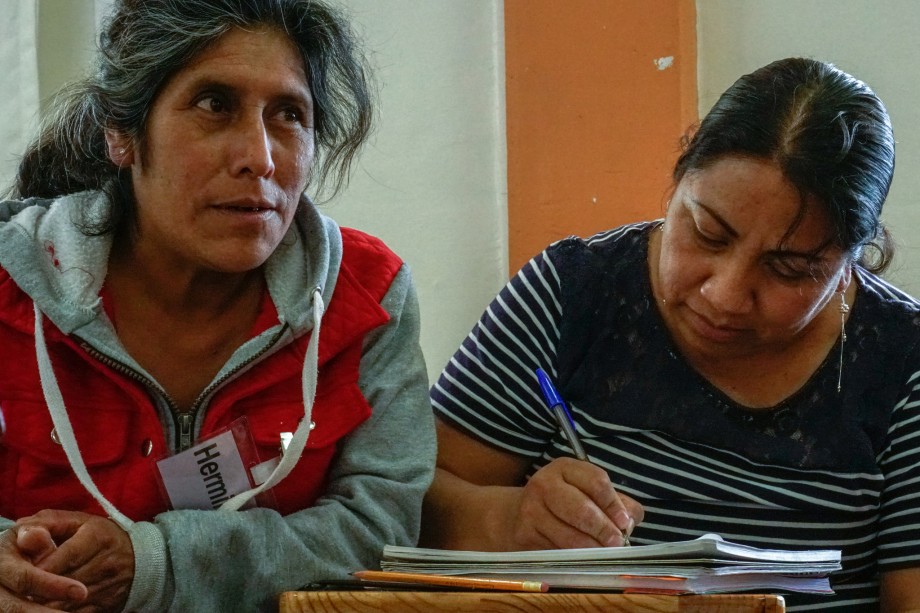 Susana Torres, right, and other new women politicians learn how to execute projects and build their network at a January 2020 training in Ixtlán de Juárez in Oaxaca state.

That system allowed men to dominate community assemblies, the powerful governing councils in municipalities. Women, meanwhile, were funneled into lesser community roles, such as running the schools committee or organizing the annual feast for the town’s patron saint.

Into the gap stepped Espiral por la Vida. In two-month courses and online follow-up sessions, the group teaches female politicians how to analyze budgets, leverage male allies, execute projects for constituents, create networks with each other, and more.

Susana Torres, municipal council member in Santa Catarina Ixtepeji in Ixtlán, has overseen the treasury since 2019.

“The members of the council have complained because I ask them for clear and detailed accounts,” says Torres, who completed the training in January 2020. “They tell me that women are too complicated.” 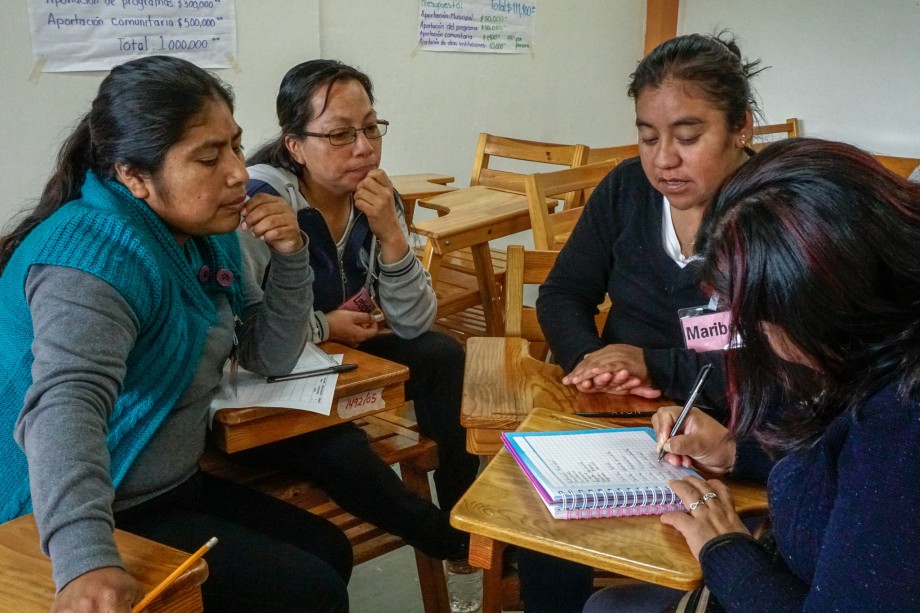 During a January 2020 training in Oaxaca state, Concepción Felipe, far left, tells fellow women politicians about the challenges of working while taking care of her family.

The training taught her that domestic violence is a crime. “Before, women would come to the town hall, and some authorities would even tell them to go back home to work things out with their husbands,” she says.

“Sometimes, they even asked them, ‘Well, what did you do to make your husband mad?’ Now, when an abused woman comes to the town hall, I ask the municipal police to locate the aggressor so that he can be processed.”

Mayra Ramírez (no relation to Ana Ramírez), who runs the public works portfolio as a council member in Santa Catarina Lachatao in Ixtlán, helped repair a drinking water network and install solar lamps in areas with no public lighting.

“Exercising my position has been complicated,” says Mayra Ramírez, who did the training in January 2020. “It is not common [in the community] for a woman to give orders. Many times I don’t insist and just look for someone to help carry out the activities of the position, as we were taught in the trainings.”

After the coronavirus pandemic erupted, Concepción Felipe, who oversees health and education as a council member in San Juan Chicomezúchil in Ixtlán, organized a checkpoint to limit access to her municipality. She ran it herself for four months before turning it over to families who take turns managing it.

But José Guadalupe Santiago, a trustee and one of the top officials in Santa Catarina Lachatao, worries that some council tasks may overwhelm women. Sometimes, for example, council members must dig ditches, guard their towns and do other physical labor in their communities.

“I don’t disagree that women should hold political posts,” he says. Nevertheless, he continues, “I don’t feel comfortable because sometimes we have to guard our land, and I wouldn’t want my wife to have to confront violent neighbors.” 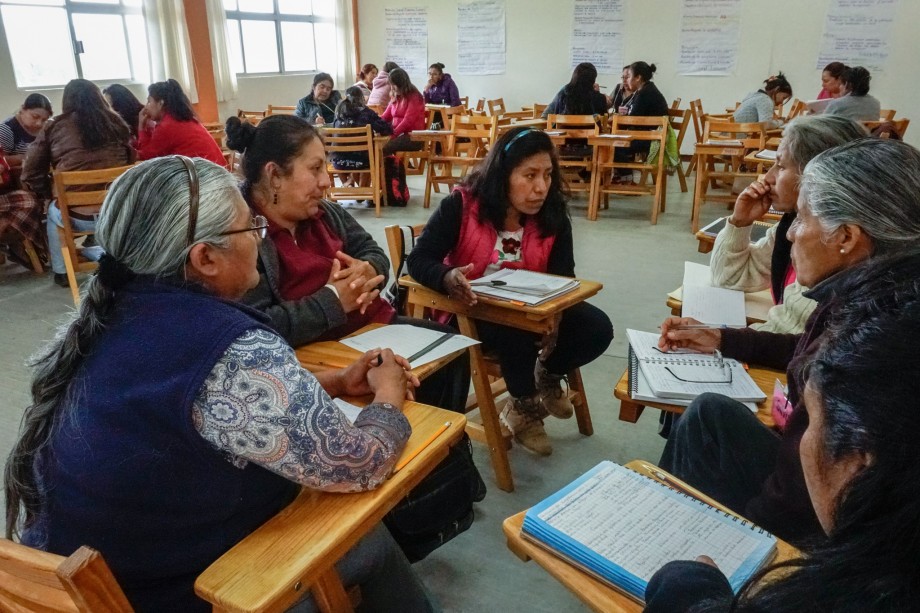 Women who are first-time officeholders in Oaxaca state gather in January 2020 for a training where they learn a range of skills, from budgeting to self-care.

In 2019, all of Oaxaca’s 570 municipalities had at least one woman on their councils. Rodolfo Hernández, a trustee in San Juan Chicomezúchil, thought it would be hard for women to work on the council. He has changed his mind.

“Now I have a female colleague on the council, and I realize that, just like us, she can organize and carry out tasks too,” he says.

By the next municipal elections – scheduled for 2022 – 50% of elected officials must be women.

“While men build roads for transport,’’ she says, “women look for ways to light dark streets where they walk.”