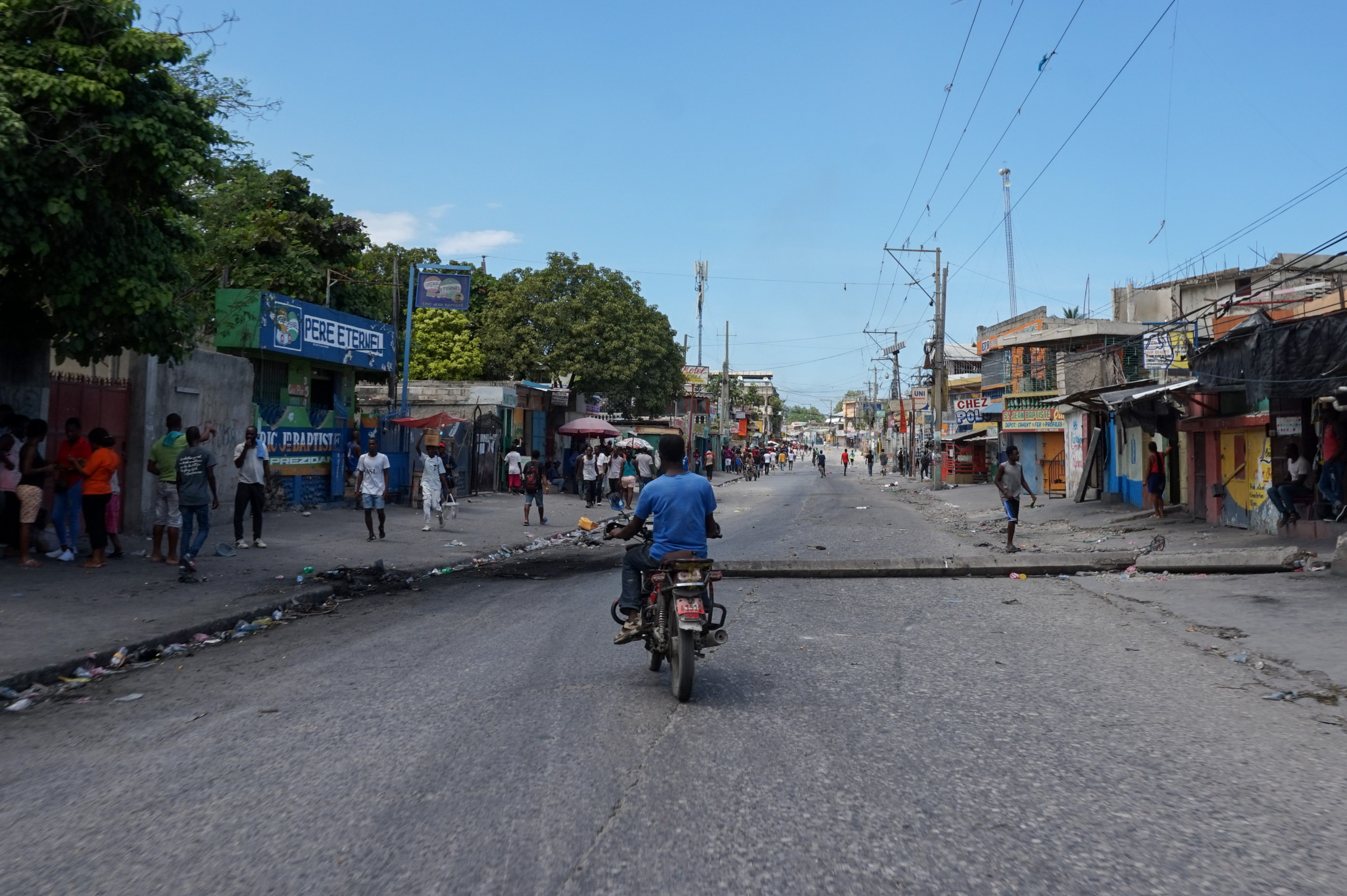 PORT-AU-PRINCE, HAITI — For the last five years, Wilner Jean-Vil has worked as a motorcycle cab driver to support his wife and two children. He used to rely on a daily stream of regular customers, but with the country paralyzed by fuel shortages and protests, finding any business is a struggle.

“There is no work, no social security. We try creating jobs for ourselves, but today, we are tired,” Jean-Vil says. “There is no fuel available in the pumps.”

With no gas to fuel his motorcycle, he has no choice but to stay home and help his wife with their children. He now relies on food donations from friends to feed his family.

“I have nothing to give my children,” he says, becoming agitated when the topic switches to them. “This is no way to live.”

In recent years, Haiti has experienced disruptions to its fuel supply. The Caribbean country relies entirely on imports, which have not met demand due to the government’s inability to pay on time. Now, with Russia’s invasion of Ukraine putting even more pressure on fuel supplies, Haiti’s pumps are practically empty. Black market dealers are most residents’ only option.

Jean-Vil is one of over 800,000 motorcycle taxi drivers in Haiti who are struggling to make ends meet. His family can no longer rely on his earnings of around 200 to 1,500 Haitian gourdes ($1.45 to $11) a day. The government was subsidizing the cost of fuel, but after Prime Minister Ariel Henry’s announcement in September that these subsidies would end, prices more than doubled, sparking demonstrations and roadblocks across major cities with calls for the prime minister’s resignation. Criminal gangs blockaded the main fuel terminal in Port-au-Prince, preventing fuel trucks from getting through. Many businesses and schools remain closed as civil unrest and fuel scarcity bring the country to a standstill. 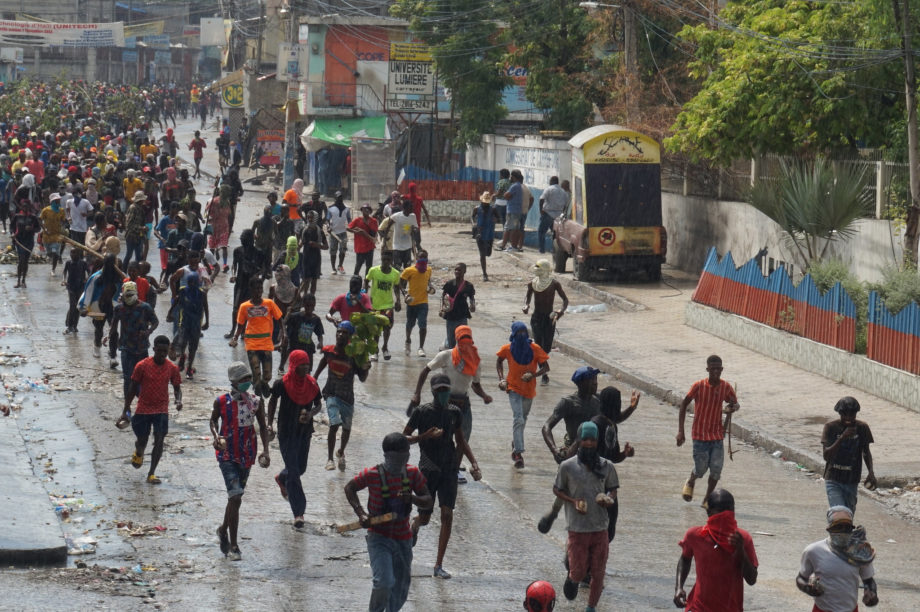 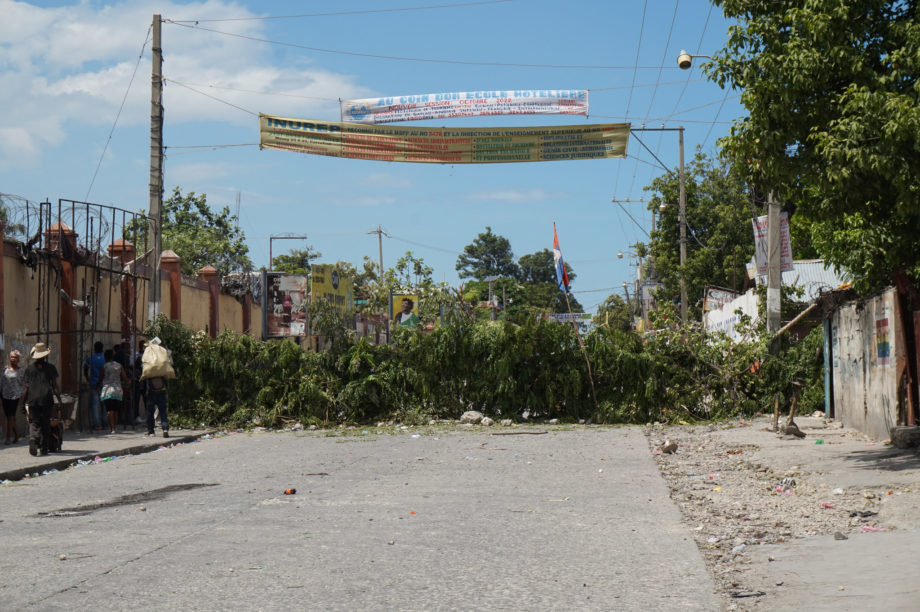 Protesters take to the streets to voice their anger over the doubling of fuel prices. Some use trees to block a street in Port-au-Prince.

Local experts warn that the country must take serious measures to prevent riots, but government moves to distribute fuel during the second week of November have done little to quell anger or lower prices.

“Three months ago, I spent more than a day at the pump to get 5 gallons of fuel at the price fixed by the state. I paid 250 gourdes [$1.80] a gallon,” Jean-Vil explains. “Even though it was difficult and it took me a long time, it was available.”

With fuel so scarce, residents turn to the black market, where dealers set prices as high as 3,500 gourdes ($25.50) a gallon.

In November, Haiti’s Ministry of Commerce and Industry, which refused requests for comment, announced a “disciplined distribution of gasoline in the interests of the entire population,” after gas was supplied to “various gas stations.” It is thought that police were able to regain control of a major fuel terminal previously blocked by gangs.

Dieunaire Jean Charles is a former motorcycle taxi driver and coordinator of Plateforme des Associations de motocyclistes taxis d’Haïti, an association of over 37,000 members, which has helped oversee motorbike taxi drivers, supplying them with jackets so they are more visible on the road and promoting safer riding practices. He says the additional fuel won’t alter the situation.

“We are still asking for a decrease in fuel prices,” Jean Charles says. “The state announced that fuel will be available in gas stations but has not announced a decrease in price. We are still dealing with increased prices, which isn’t to the advantage of the population.” 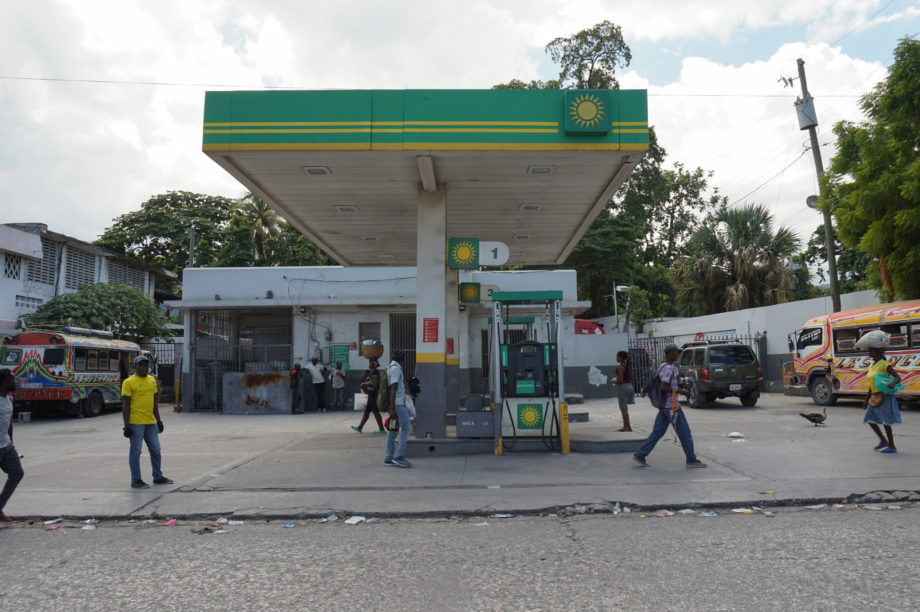 Néonce Antoine, a gas station manager, says even if they did receive a supply of fuel, he fears attacks from protesters should he try to sell it at the new, higher price.

“I think the government has acted very badly, doubling the price of fuel in a country where the unemployment rate is very high and the minimum wage is very low,” Antoine says. “This will further suffocate the people, who are already living in increasing insecurity because of gangs.” He says the rise in gas prices also affects the cost of food, construction materials and health care.

Food prices have been steadily rising. Haiti doesn’t produce enough food to meet demand, so it relies on imports, mainly from the United States and neighboring Dominican Republic. Haiti imports all of its cooking oil and 80% of its rice, the country’s biggest import and a product whose price has increased by more than 30% over the last year. The dramatic rise in food prices, together with the fuel crisis and roadblocks, threatens food access in a country where about a third of the population is already food insecure. 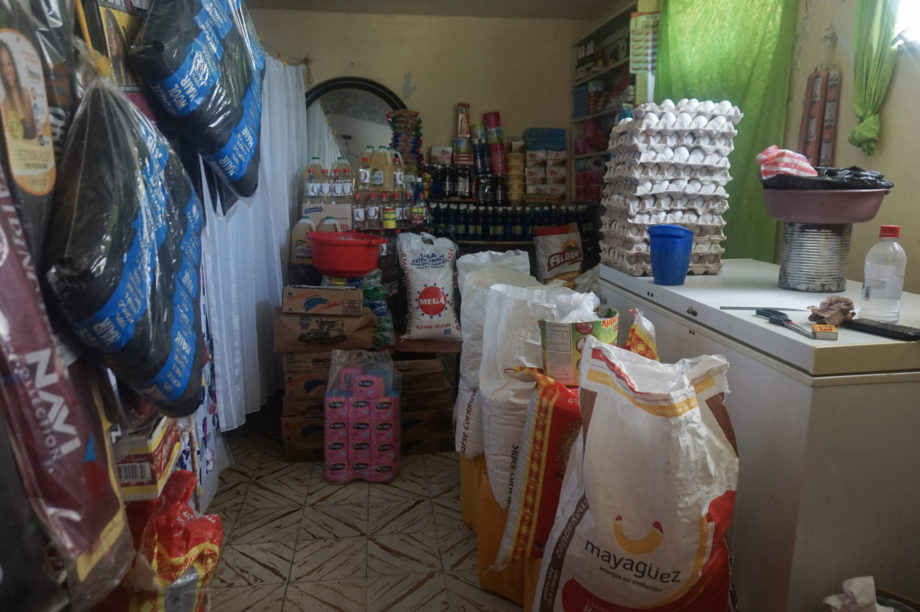 Haiti imports all of its cooking oil and 80% of its rice, the country’s biggest import, whose price has increased by more than 30% over the last year.

Jeannie Brice’s husband drove a motorcycle cab until the crisis forced him off the road. “The situation is disastrous,” she says. “When you don’t work and when your husband can’t work, and you see your children suffering, needing to eat, and you can’t give them food — you can understand my suffering as a mother.”

Sabine Lamour, a professor of sociology at the State University of Haiti, says people who work in the informal sector, such as cab drivers, street vendors and merchants, are struggling to make a living because of the instability. People who work on the street are seeing their working space reduced with the growing insecurity, she says.

“What is happening today in the country is the result of social imbalance existing within the Haitian population,” Lamour says. “Serious measures must be taken to avoid riots.”

Jean-Vil can only wait to see if the latest fuel delivery will help him earn a living.

“Fuel must be available in the pumps, so that we can work and provide for our families,” he says. “It shouldn’t be too much to ask.”