Skip to main content
The story you are reading was published on Monday February 9, 2015. To read more recent stories click here. 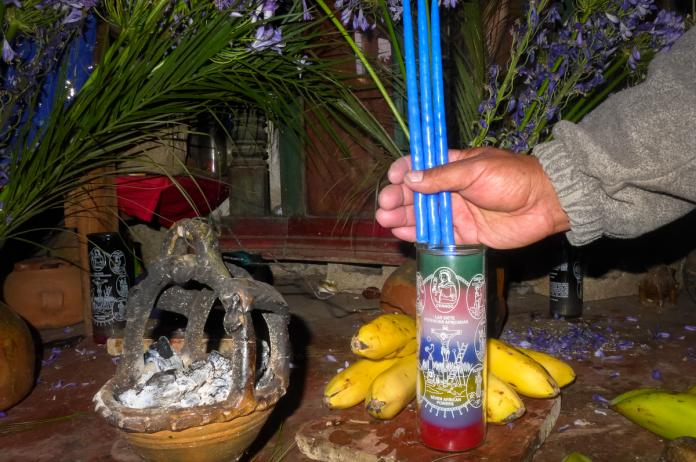 SANTA MARÍA EL TABLÓN, GUATEMALA – The spiritual guide arrives at the site of the ritual in this western Guatemalan village bearing his materials in a plastic box. He supplies participants with ensarte – an incenselike material used to make fire.

The participants peel and gather up the ensarte and hand it back to the guide. He adds ocote (pine trees), bread and laurel leaves to the tinder in Santa María el Tablón, a village in the department of Sololá. After distributing colored candles to the participants, the guide lights the fire while making the sign of the cross and proclaiming the blessings of Ajaw, the Mayan creator-god. He invokes the 13 energies and 20 nahuales, spirits that Mayans believe inhabit nature.

This guide belongs to an association that, determined to prevent the commercialization of Mayan culture, forbids its members to talk about their sacred activities. He declines to give his name.

Spiritual guides have long faced persecution, especially during the armed conflict that raged in Guatemala for more than three decades.

However, the guide feels the time has come to talk about the importance of Mayan spirituality. This is the first time someone from his spiritual association has spoken to the media.

“This gift of being a spiritual guide, I didn’t choose it, but rather my nahual decided it like this,” the 39-year-old guide says, breaking from Kaqchikel to use the Spanish word for “gift.”

Spiritual guides have figured prominently in Mayan culture for thousands of years.

Today, guides seek to preserve Mayan spirituality and move past a long history of fear. Despite opposition from people who hold differing religious beliefs, spiritual guides hope to inspire others to take up this work.

Mayan spirituality is rooted in the civilization that spread throughout Mesoamerica, which comprised present-day southern Mexico, Guatemala, Belize and western El Salvador and Honduras, some 1800 years B.C.

The Spanish killed many spiritual guides when they conquered Mesoamerica in the 16th century, but the oral tradition has kept their beliefs and practices alive through the centuries, says José Roberto Morales, a social science teacher at the Latin American Institute of Social Sciences, an intergovernmental research and teaching institute.

Mayans were often attacked during the armed conflict between the Guatemalan government and guerrilla groups, from 1960 to 1996.

Over 80 percent of the 200,000 people who died at the hands of government troops were Mayan. The state saw Mayans as supporters of guerrilla groups, according to the Historical Clarification Commission, an independent body established in 1994 to catalog human rights violations committed during the war and recommend ways to encourage national healing and harmony.

“In the war, they killed many different types of guides,” Morales says. “One of the elements was to decimate the population because they were a danger to the system.”

Because of the targeted killings, Mayan leaders went into hiding, says Morales, who is also a spiritual guide in Rabinal, a town about three hours southwest of the department of Sololá.

Morales estimates there are thousands of spiritual guides in Guatemala. There can be as many as 300 in a single village, he says.

This story’s guide believes he was chosen for his vocation. When he was 16, he suffered an infection that conventional medicine could not cure, he says. His parents consulted their village’s spiritual guide, who said their son’s life mission was to become a guide himself.

According to Mayan spirituality, guides are born with their gift; astrology plays a key role. They discover their mission through dreams and visions when they suffer from a sickness or accident.

At first, his family did not encourage him, considering the calling very difficult, the guide says. But now his family supports him.

“It was not a person, not even my family,” he says, sitting in a room in his small home. “It was the creator who chooses. Because a spirituality is not desired, nor is it bought, it is not sold. It is worked for.”

The calling of a spiritual guide is to help people find the meaning of their lives through offerings and Mayan ceremonies, most of which are conducted in secret.

The guide is available day and night, he says. He attends to eight to 10 people a day and can see up to 300 people in a month. Other spiritual guides serve far fewer people.

The guide performs his ceremonies at a 2-meter-diameter (6-and-a-half-foot-diameter) altar at the center of an 8-meter-square (26-foot-square) room. He charges for the materials he uses in a ceremony, but not for his services; he lives on alms.

The simplest ceremony, such as something related to employment, costs 140 quetzales ($18). Larger ceremonies can cost 300 quetzales ($39), as they involve more elements, and the guide will transmit a message to the family from Ajaw.

Weddings, home blessings and ceremonies attended by hundreds of people can cost up to 3,000 quetzales ($392) because they require more materials.

Paulina Chiyal, who has been consulting this guide since 1999, loves to tell the story of how he saved her newborn son’s life.

Three days after giving birth, she fell ill and went to the hospital. While she was away, her son got sick. Doctors were unable to diagnose his illness, she says.

She decided to seek out the spiritual guide for help.

“He had to do three Mayan ceremonies to stop what was happening to my son,” Chiyal says in Kaqchikel.

The effectiveness of the ceremonies depends on the faith of the participants, Chiyal says.

They consider him a great expert on the stars because of his communication with Ajaw, says Yac, who belongs to an association that does not demand confidentiality.

“This Mayan priest has, of course, helped many people in their businesses, problems and issues like that,” says Yac, who has met him at meetings of the spiritual guide community.

Many people do not understand the Mayan culture or the work of its spiritual guides, she says. Some criticize guides, calling them sorcerers.

The guide sees no conflict among different beliefs.

“I don’t seek out any kind of problems related to religion,” he says. “In my work, I accept all kinds of religions. We are all equal.”

Nonetheless, he and other guides say they face continuing opposition from other religions.

One forthright opponent is Luis Martín of Sololá, the capital of the department of Sololá.

Saloj, a Christian, says Mayan culture must be preserved, but he associates spiritual guides with evil.

“We know there is only one God, and one mandator of man, who is Jesus,” he says.

Morales, however, says a willingness to cooperate and share experiences is necessary to preserve Mayan spirituality.

“Because we are a culture of more than 5,000 years of existence,” he says, “which is why we are still alive and reconsidering new ways of coexisting with human beings.”

The spiritual guide agrees. He has noticed a growing interest in Mayan spirituality among young people.

“Young people are now becoming interested in their nahualand with the knowledge of the nahual,” he says. “They are now making the decision, and they approach to learn more about the culture.”

Roberto Xoquic, a spiritual guide from the village of Chaquijyá, also in Sololá, agrees.

A guide is a source of inspiration, especially for young people, he says.

“He gives advice to people in an open way,” says Xoquic, who belongs to an association of guides who speak openly about their work. “Youths, adults, elderly, men and woman go with him for his effectiveness and dedication in his work.”

The guide says performing his work deepens his sense of connection.

“I like my work, because in this way I realize what is happening in my community,” he says.

He is motivated to help others and to tell his story, he says, declaring that Ajaw will reward him with blessings.