Skip to main content
The story you are reading was published on Thursday March 17, 2016. To read more recent stories click here. 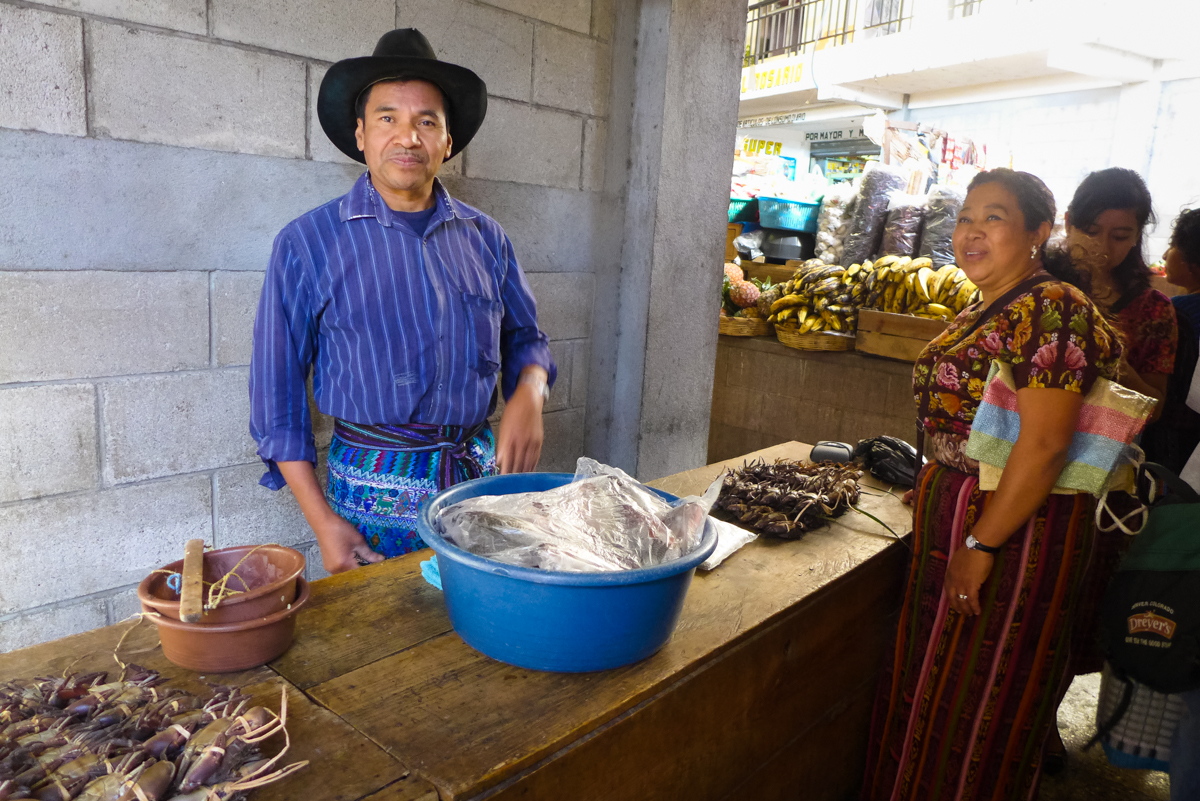 PANAJACHEL, GUATEMALA – Arturo Yach Noj has been a boatman on Lake Atitlán, a lake in southwestern Guatemala’s Panajachel municipality, for about 45 years, he says. In decades past, he drank water directly from the lake.

“But now everything has changed,” Yach Noj says. “Our lake is contaminated.”

Tourists don’t buy fish. They distrust it because they think it’s from the lake. Hilda Emilia Xitamul Yac, the owner of Ricassoli Pizza Steak House restaurant on Panajachel’s main strip

Experts confirmed the presence of cyanobacteria in Lake Atitlán in 2009. The toxic strains of the bacteria can affect the liver, kidneys, central nervous system and skin of both humans and animals, and it has been linked to degenerative brain diseases.

Seven years later, the lake is still contaminated, says Margaret Dix, a researcher at the Altiplano campus at the Universidad del Valle de Guatemala. Dix coordinates and manages the monitoring and analysis for the laboratory at the university’s Centro de Estudios Atitlán, where researchers study the lake and find ways to preserve it. 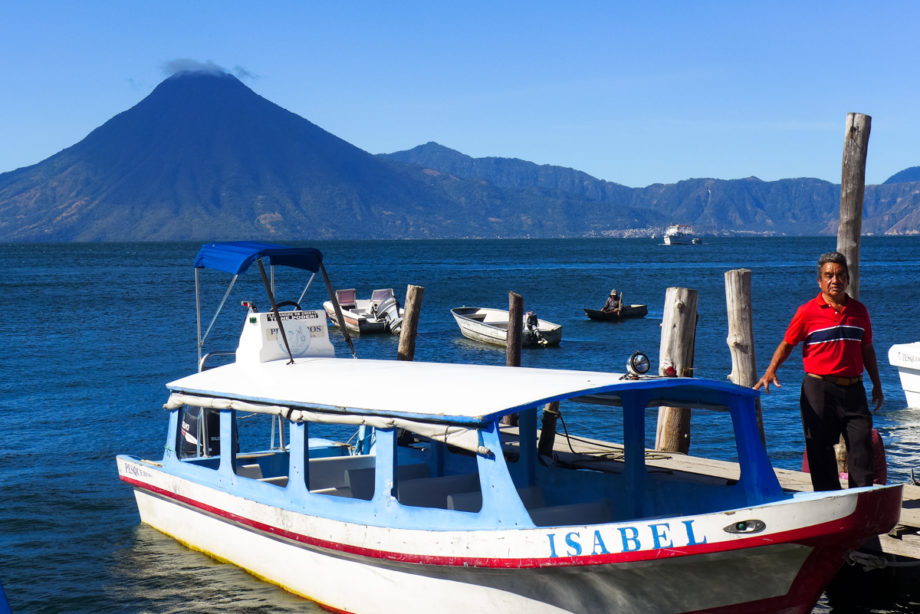 Boatman Arturo Yach Noj says he has known about Lake Atitlán’s contamination for about seven years and believes it is the cause of his occasional skin rashes. Even so, he says, he must continue working despite the risks.

That report was based on samples tested by Dix’s university and AMSCLAE, the government institution that monitors the lake and implements conservation measures.

BLOG: In rural Guatemala, sometimes the right source is found…in Zumba class? Learn how this Guatemalan reporter used unconventional methods to find the key source for this important story.

The August bloom was the strongest since 2009, according to an AMSCLAE press release.

Cyanobacteria occurs naturally, and not every type is toxic. In the case of Lake Atitlán, the bacteria contains phosphorous.

The presence of phosphorous is evidence that the lake is contaminated with the sewage and fertilizers used in agriculture in the different communities in the Lake Atitlán basin, says Elsa María Reyes, a biologist and head of investigation and environmental quality at AMSCLAE.

No one is surprised by reports that the lake is polluted, Yach Noj says. The contamination is visible: When there is a cyanobacteria bloom, portions of the lake change colors, he says. Deep down, the water is brown, but toward the surface it is red. Plus, he says, it smells bad.

“Tourists don’t buy fish,” she says. “They distrust it because they think it’s from the lake.”

The system costs around 11,000 Guatemalan quetzales ($1,433), she says, and she would need to temporarily close the restaurant to install it. She can’t afford that, she says. 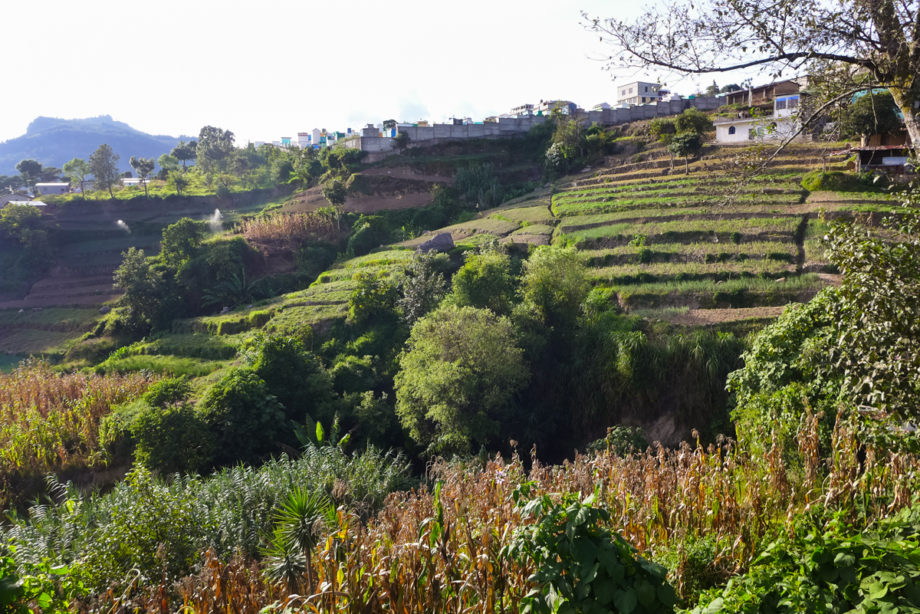 Farmers, including those who work this land in Guatemala’s Sololá department, are using a special fertilizer that has been distributed by the government to help prevent further contamination of Lake Atitlán.

AMSCLAE is asking owners with a business around the lake, such as hotels, restaurants and bars, to hire one of their recommended advisors to visit their business and conduct an analysis of their use and treatment of water, says Elida Quino, the head of economic and sustainable development for AMSCLAE.

After this analysis, the consultant will recommend what type of system the business owner should install, she says. AMSCLAE does not pay the consultant’s fee or the installation of a system, she adds.

Reyes says AMSCLAE is aware that people have become ill after eating fish from the lake, but it’s difficult to confirm and document those cases, especially if the people who got sick are tourists and leave the area.

Everyone agrees the lake needs to be cleaned and contamination needs to stop, but those are expensive projects.

The government has a plan to build at least one wastewater treatment plant for each of the municipality’s 15 communities.

But once those plants are built, Panajachel municipality Mayor Abraham Mayén says, it’s not clear who will pay to maintain them.

But now everything has changed. Our lake is contaminated. Arturo Yach Noj, a boatman on Lake Atitlán

Panajachel already has a wastewater treatment plant, Mayén says. But it only serves 45 percent of the municipality’s population of over 19,000, as of 2015 government data. It costs about 100,000 quetzales ($13,028) per month to maintain the plant, but local people pay between five quetzales (65 cents) or 10 quetzales ($1.30) a month for the sewage system.

It’s not clear how the plant is funded, aside from contributions from local people.

Other communities will have the same problem if more plants are built, he says.

“I look at the master plan like a dream,” Mayén says.

The government has done some things to curb further pollution of the lake.

AMSCLAE repairs and conserves gullies and builds runoff barriers, Reyes says. The organization also distributes a special fertilizer, donated by the Guatemalan government, to farmers who live in the basin.

The organization also hosts events to help people understand what’s going on with the lake and learn about how to use its water.

AMSCLAE recommends that people avoid eating the lake’s fish and drinking its water. Recreational activity in the lake is risky, according to the organization.

But for fishermen who have long made their living on the water, the recommendations could have devastating consequences.

But now that the lake looks different, Sahon sells about 40 quetzales ($5.21) worth of fish each day.

Like Yach Noj, Sahon spends long periods of time in the water.

“But what are we to do if it’s our means of livelihood for the family?” Sahon says.

Sahon has nine children. The oldest is 21 years old and the youngest is 4.

“All of them are in school,” he says. “Without fishing, this wouldn’t be possible.”